The May 22 opener is a great day for targeting those tidal rivers in New Jersey.

Two fish walk into a bar.

Okay, how about this; two summer flounder swim up to a tidal river sandbar, settling down along the warmest part where a combination of sand and mud bottom is found.

Looking over the seasonal menu of grass shrimp and spearing, what looks like a small school of injured killies comes tumbling along the length of the sandbar.  What makes this collection of baitfish different from other baits is that they are swimming more slowly than normal.  Perhaps it’s because they are weighted down by a small bucktail.

Putting aside their appetizers, both resident fluke leave the warm confines of the sandbar, open their jaws, and begin munching on minnows; one becomes impaled on the upper bucktail’s hook, while the slower second fluke engulfs the lower killie and bucktail of a second outfit.  Soon both are lifted off their sandbar as they struggle in the water column to avoid the waiting nylon net.

No punchline here; their efforts at struggle are fruitless, and they soon become part of an evening meal for a couple of immediate family members enjoying the first of the season fluke action along the Garden State’s tidal rivers.

Rolling On The River 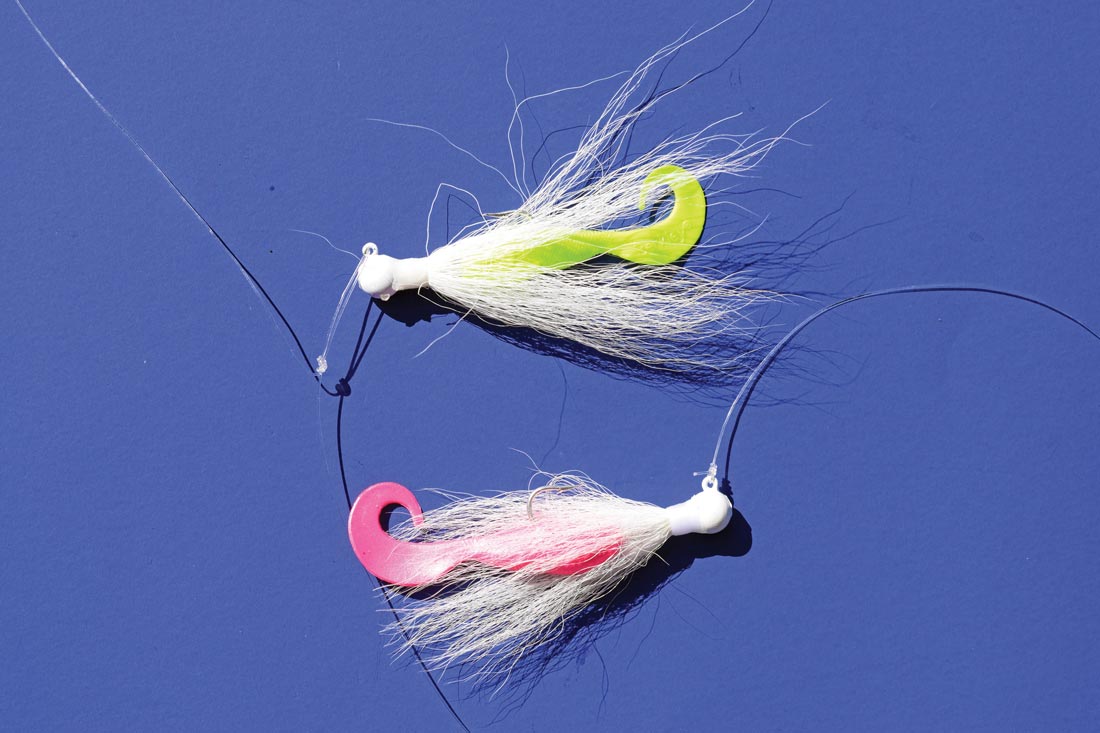 A quick peek at the roadmap of New Jersey shows that there are seven major tidal rivers (not bays), which dot our eastern shoreline from the Navesink River in the north to the Great Egg Harbor River in the south. No matter which of these tidal rivers are your home waters, what follows should be appropriate.

The tidal river where I find myself fishing most often is in the middle of the state. This ribbon of water is approximately 8 miles long between where it turns brackish to where it joins the ocean inlet.  Over the many years I’ve fished this particular stretch, I have targeted fluke in just about every side channel, cove, underwater hump, sandbar, boat dock, marker buoy, and tidal eddie.  What my many trips on this river have shown is that there are only six spots from which I can usually bag a limit of quality fluke without wasting an abnormal amount of gas.

So how do you locate such special spots in your particular tidal river?  First, you do not listen to anglers who swear that there are no quality fluke in a tidal river.  Secondly, you don’t necessarily fish where the armada of boats is drifting.  Finally, use tackle, techniques, and baits that are suited to the waters you’re fishing and the fish you’re targeting.

It all breaks down to answering four important questions. Where are the fluke located during the early months of the season as they migrate into the tidal river from the ocean?  Where and what type of forage base is in the river that acts as a food source for the fluke? What tackle and technique is best suited as you target the resident fluke? Finally, where are the fluke in the final months of the season as they prepare to migrate into the ocean on their offshore spawning quest?

Figure out answers to these simple components, and you should up your score.

Whether you believe that global warming or climate change is a fact or a hoax, during the first several weeks of any fluke season, water temperature plays a key role in attracting both forage fish and fluke (summer flounder) to a particular section of a tidal river.  I’ve seen a 10-degree difference between the upper reaches of my tidal river and the waters of the river near the inlet and ocean.  Guess where the majority of the forage fish and fluke are resident?  Yep, in that section of the river that has the warmest water in the area.

Finding the warmest water in a tidal river is easy, no matter if you use a hand-held temperature gauge attached to a length of cord, or a depthfinder with a transducer, which measures the temperature of the water around the boat. The temperature only needs to rise a few degrees to cause fluke to exit the area’s warmer muddy bottom and chase after your baited hooks.

Often, anglers fishing my local river at the opening of the season wonder why I keep working an area that is perhaps 200 yards long, and 50 yards wide.  My answer is simple, “that area has the warmest water, and the most active fluke.” You don’t need to burn gallons of fuel once you’ve found the area, which acts as a magnet for hungry fluke.

With a rather scant 17-week season in New Jersey, the vanguard of summer flounder enter our tidal rivers prior to the actual start of the season on May 22.  The forage base these initial and subsequent bodies of fluke feed upon vary depending on whether it’s early summer flounder season, mid-season, or late season.  I suspect that killies, spearing, and grass shrimp are prevalent throughout the entire season, with peanut bunker adding to the forage base during the first half of July.

This is important, especially if you’re using live bait to coax any resident fluke.  Perhaps my favorite live bait, no matter the week of the season, is the largest killie or minnow my bait shop has to offer.  It may cost a few dollars more to have the shop owner manually pick out the most jumbo and nasty live bait in their pens, but it’s well worth the extra expense when targeting legal size fluke.

Naturally, all this changes in early to mid-July when juvenile peanut bunker begin splashing on the surface of various tidal rivers.  When this occurs, a single toss of a cast net should provide you with enough peanut bunker to last you the length of your fishing day. Peanuts are not sturdy bait so storing them in a livewell is essential. Even dead peanuts can be drifted effectively when hooked through both nostril holes.

I suspect that I have more rod and reel combinations than my spouse is aware of, but if you don’t tell, neither will I!  With such a substantial arsenal, you would think that I would tote along multiple outfits.  This is not the case, as I’ve found that I need only two outfits to fish my tidal river.  The keys to which rod and reel is selected are the depth of the water I’m fishing, along with the moon phase, which is occurring on the day of the trip.  The moon phase is important as it determines the speed of the river’s current along with the height of the ebb and flood tides.

Normally, I’m fishing in 15 to 20 feet at the river’s deepest point, and as little as 3 to 8 feet along various shallow flats. So what’s the best tackle for these situations? Clearly you won’t need tackle that is appropriate for many offshore species.  Medium freshwater tackle is my first choice for tidal river fluke. A fairly light tip coupled with a firm mid-section is an ideal rod for a tidal river.

One of the most fun aspects of fishing tidal river shallows is that on certain days when the water is gin clear, you can actually see fluke follow your double bucktail rig.  This is when your nerves will likely kick in as you will try to set the hook before the fluke actually engulfs the baited jig.  Be patient, and you’ll hook more fluke. Also, don’t let river shallows convince you that there are no fluke in that area.  Some of the biggest river fluke I’ve caught were in just 3 to 4 feet of water.

There will be times when the river’s population of fluke are in the deeper waters of the main channel. This is when you have to increase the size of the offering, perhaps with a trailing live bait.  The bait trailer can be attached to a three-way T-shaped swivel with a 36-inch long leader. Many anglers call this the “Wonder Rig.”

If you hate fishing tidal rivers, you are probably fishing in cold water, using the wrong baits, fishing with a fleet of boats, and using tackle that’s far too heavy for the task at hand.  As stated, there are effective alternatives to racing east towards the inlet.