Whether you fish the North or South Shore, light tackle can play big on blackfish under the right conditions.

Most anglers enjoy reading articles about hitting the offshore wrecks—and why not? Trips that see catches of 5- to 7-pound sea bass, 4- to 5-pound ling, 4-pound porgies, jumbo blues, cod, pollock and other assorted species have you ready to pack your gear. Then it hits you. The article is focused on fishing from a private boat outfitted with triple 350-horsepower outboards or twin diesels. You don’t own a boat, and your friends who have boats are not ready or equipped to make the run to the 40- to 80-mile wrecks.

No big deal; it’s party boat time. The months of November and December are prime times to take a shot in the offshore waters. Whether you are a novice or expert, hauling in fish from the deep wrecks can be a real blast. What is most important is what tackle to bring and how to use it.

Capt. Steve Kearney of the “Super Hawk” has been licensed for 32 years, and all those years have been spent running a boat from Point Lookout. Steve begins his offshore runs in late October and ends them in December. You will be fishing wrecks from 90 to 300 feet so bring a medium or medium/heavy rod that can handle 10- to 16-ounce weights. Bring a 3/0 or 4/0 class conventional reel spooled with 30- to 40-pound braid. I mentioned to Steve that a couple of years ago a captain making an offshore trip told the anglers on board to leave their spinning gear in their cars. Steve agreed that only experienced anglers should take on these wrecks with spinning gear. Steve personally prefers 30-pound braid and a long mono leader of 15 feet. He told me regular mono works just fine and it is not necessary to have fluorocarbon leader. Most of the species taken on the wrecks are not “line shy.”

Jigging for sea bass is a very effective way to entice the biscuits. Steve said the lighter the better so employ an AVA 27 or 47; and you might consider placing a jelly worm or Gulp about 12 inches above the jig. I asked Steve if using a heavy bucktail is advantageous, but he thought that they are not really effective in the deeper depths so you are better off with jigs.

Conventional wisdom usually dictates employing hooks in the 3/0 and 4/0 class for deep wreck action. However, this is where Steve parts company with most experts. He told me his mates rig up his fares with 1/0 and 2/0 hooks. Steve said, “even though we can connect with cod and pollock on the wrecks, you have a better hook up ratio on the smaller species. No customer has ever complained about losing big fish due to the smaller hook size.” Conventional wisdom also states that sea bass love squid as well as clams. Therefore, when I sailed with Capt. Steve in 2017, I brought along squid. Much to my surprise the sea biscuits and all the other species ignored it! I asked Steve about it, and he explained that on the particular wreck we were fishing there were no squid in the area so the fish had no real appetite for it. However, an angler next to me, who had nailed some blues, cut a small one into chunks and used them to hammer the sea bass. I definitely plan to use that strategy this year.

Steve’s final suggestion was, “don’t hesitate to ask the mates for help. Take their advice and allow them to rig you up with what’s working the best. They are on the boat every day and they know that what works on one trip may not necessary work effectively on the next one.”

Capt. Anthony Gillespie of the Capt. Lou VII out of Freeport has been running offshore since 1995. When targeting the 60- to 80-mile wrecks Anthony will be at the helm of the Starstream VIII. He loves the fall action as most species are migrating and gathering together on the deep-water areas. The prime time for him to make these excursions is mid-November and into December.

He advises that anglers come aboard with a medium action rod and a low-profile reel. Leave the mono at home and spool up with braid from 40 to 60 pounds. Anthony says braid allows you to use less lead and offers better feel when the fish strikes. He likes to attach 4 to 5 feet of fluorocarbon leader. He completely agreed with Capt. Steve on the use of spinning reels. It’s for veteran anglers; novices should stick with conventional gear. According to Anthony most of his fares go “plain Jane” with two 3/0 or 4/0 hook rigs. Clams and squid are the baits of choice but a piece of Gulp almost always gives anglers an edge.

During the offshore season the captain works the wrecks from 140 to 330 feet so he recommends bringing lead of 8 to 16 ounces. Jigging with diamond jigs can be very effective, and jigs with a teaser tube can be deadly for pollock. He also noted that on some trips greyline tile have been caught.

On the Laura Lee Express in Captree Capt. Neil Delanoy told me he has been behind the helm as a captain for 46 years. He begins his runs in early October and finishes in December. He advises that you be ready for the 180- to 200-foot wrecks with a medium action rod, and a 2/0 or 3/0 conventional reel spooled with 30-pound Power Pro. Most of his customers employ a 3- to 4-foot 40-pound mono leader and a basic two hook high/low rig with 3/0 octopus hooks. Clams and squid are provided, and Gulp can be purchased on board.

My offshore arsenal consists of a custom Al Goldberg North Fork Special, an Al Goldberg Deepwater Wreck Special and a Shimano Tallus 70MHA. My reels are a Penn Jigmaster 500, a Shimano Curado 300EJ and a Shimano Torium 14. All were spooled with 30- to 40-pound braid and a 4-foot leader. I always take just two rods, but three reels. A third reel saved the day when one of my reels seized up. Consider protecting your reels with a zip lock bag or reel protector; especially if you are fishing near the bow. On the way to the offshore grounds a lot of salt spray can come over the rails.

Bill at Combs B&T in Amityville custom tied a tangle free style rig for me consisting of Runoff Lures 4-1/2-inch lime green Pro Glow squid skirts with 2/0 hooks. This rig was a sea bass catching machine until the wreck decided to keep it. (I foolishly forgot to bring more than one.). Then I decided to try a high/low rig from the mates and went on to bag my limit.

In addition to your basic terminal tackle, take some rags, a bait knife, a de-hooker and a cutting board. Also, take a cooler with a capacity of 65 quarts or larger.

You should also check with the captain about amenities on board. Not all boats have fully operational galleys during the late fall and winter. If you bring your own food and beverage please remember that these trips can run from 12 to 18 hours. Check if the boat is equipped with bunks. If so, you might want to take a sleeping bag or a pillow.

The captains gave me some additional tips that are noteworthy. If you are a novice don’t worry. The mates on these boats will be glad to rig you up and show you the ropes. Rod and reel rentals are available and terminal tackle can be purchased on board. Bait is always supplied.

All the party boats mentioned are fast, smooth riding, offshore worthy battlewagons and are run by captains with a total of 105 years of experience. Hop aboard this fall and join them for a cooler filling smorgasbord of sea bass, porgies, ling, cod, pollock and blues. 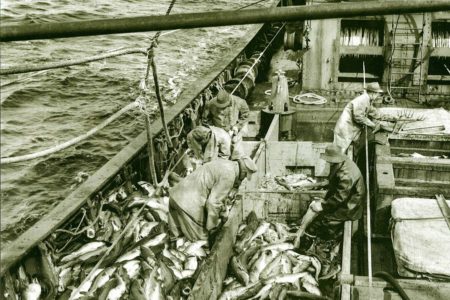 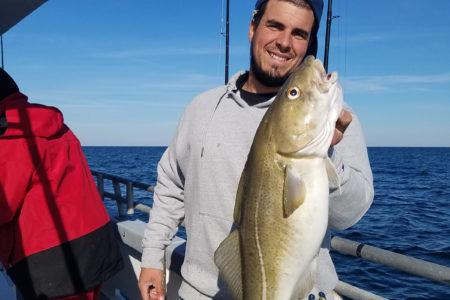 Pay extra attention to the finer points of rigging to greatly increase your chances of full coolers and weary arms this winter.