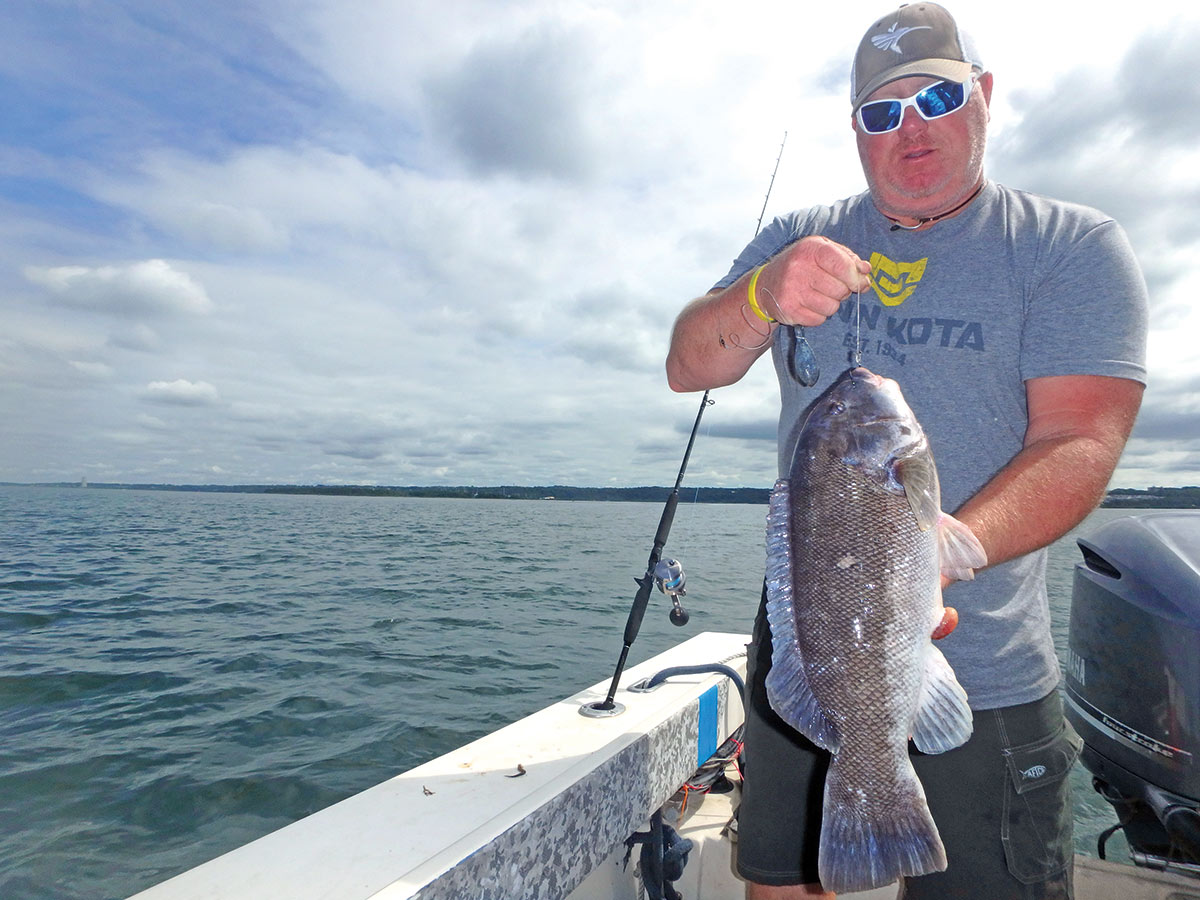 The right gear, electronics and boat positioning combine to produce on fall blackfish.

For longer than I’d care to admit, I looked at fishing for blackfish as requiring little more skill than dropping a hook baited with a crab down into a piece of rocky structure until a buck-toothed fish grabbed hold. In theory it is that simple, but when applied to the real world it quickly becomes apparent at just how much more there is to it; my lack of early success reflected this. Slowly over time I grew to appreciate the intricacies of what makes one angler more successful than the next, and why certain captains regularly produce above-average catches while those around them swim in mediocrity.

Blackfishing has become my second love in fishing over the past several seasons, sparked by a combination of a developing understanding of the technical aspect of the fishery and the difficulty of which it presents in becoming consistently successful—something with which I still struggle. Despite landing some decent fish, it only takes a single outing to humble one’s blackfish ego and force the hand at rethinking what was previously accepted as gospel.

Blackfish season in my home waters of Connecticut does not open for the fall season until the middle of October, so when I received a call in September with an invite to head north into Rhode Island—where the season remains open from August to the end of the year—I jumped at the opportunity. This trip not only afforded me the opportunity to get in a little togging before my neighbors back home, it provided an opportunity to target them in a manner of which I am less accustomed and thereby further honed and rounded out my skills.

The majority of my blackfishing is done in and around breakwalls and jetties. I have a pretty good understanding of the basics of this fishery from choosing a likely spot to setting anchor to securing a line off the bow to the wall and so-on. Once the boat is locked in place, I quickly settle into a routine of dissecting the structure to see where a bruiser bulldog might be set up for the day. As I was to find out, there is more than one way to accomplish this task.

When the morning of the trip finally arrived, I joined Capt. BJ Silvia of Flippin’ Out Charters, Tyson Alvanos (Sales Manager, Johnson Outdoors), and Jeff Clark (ComMar Sales, LLC) as the remnants of Hurricane Florence spun over the Northeast. We left the dock around 7:30 am and headed south towards the mouth of Narragansett Bay in a 25-foot Parker Sport Cabin. Our first stop of the day was a small, rocky bump above the Newport Bridge to fish the last of the ebb current. It was still kind of early in the fall, so the fish could just as likely be staging shallow as they might be deep, so this was as much a test to see if there was any life in 50 feet of water as anything. We had some action, but not what we were looking for, so after about 30 minutes we decided to chase albies for a little while until the tide began to flood, and the current increased. That also gave us a chance to take a look outside the Bay to see if a run to some ocean rockpiles could be an option; they weren’t.

After chasing albie schools for a bit, we returned to the rockpile where we made those first drops, “set anchor,” and checked to see if the newly-moving current improved our success. There was definitely life down below as several porgies, a few short blackfish and a couple nice black sea bass were caught, but it was not the action we were looking for so we moved north to one of BJ’s pet spots; an old shipwreck in 40 feet of water that has produced some bruiser tog for his clients.

As we cruised along, BJ filled me in on this hotspot. “I knew about this wreck for quite some time before I was ever able to fish it properly for blackfish. You see, the old, wooden structure sits on a bed of soft mud, so anchoring around it in a traditional sense is nearly impossible. What’s worse, the combination of the running current and wooden structure of the wreck itself makes anchoring on it futile. It wasn’t until I began using my Minn Kota Riptide Ulterra that I was finally able to see exactly what this wreck had to offer in the way of blackfish-holding structure. The first day fishing it with the trolling motor produced several double-digit fish, and every visit since has produced quality fish.”

Arriving at the wreck, BJ slowly eased up into the current until the Humminbird SOLIX 12 display showed the leading edge of the wooden structure. More and more it came into view on the screen, and my mouth began to water as I readied a crab for deployment. Once we verified the wreck’s position and how the current was running on it, BJ switched over control of the boat to the trolling motor and he “anchored” us in place with a tap of a button on the trolling motor’s remote control. It wasn’t time to drop the crabs down just yet, however, as the exact final resting point needed to be fine-tuned as BJ moved us just high enough up-current so that our crabs fell right onto the structure. Spot Lock was engaged, and before we had time to make a few more jokes about the grueling task of setting the anchor, the first blackfish of the day was making a b-line for the wooden planks of the defunct ship.

While there was little to no need in adjusting the boat’s position with the change in water depth as might be the case with traditional anchoring practices in order to stay put on the prime drop when attached to a set length of anchor rode, we did adjust the boat from time to time to fish “new” structure. When a certain section of real estate began to produce fewer bites, a simple adjustment on our location with the trolling motor’s “Jog” feature moved us 5 feet in any direction; no more pulling in or letting out rope and only being able to move up or down current; we could move up, down, right or left.

We pulled a steady mix of big black sea bass, short tog and even a few keepers from the wooden structure over the next few hours. Several times other boats saw our success and stopped by in an attempt to duplicate it, but the wreck was too small for multiple boats to fish it at once. With the current easing off, we made a move and hit several other nearby wrecks that produce around slower current, boating a handful more blackfish and sea bass, but we never moved out of sight of the first wreck. In our absence, we watched as at least four other boats attempted to anchor up on the wreck without success. A few boats tried drifting the structure, but they did little more than add some lead to the reef. When the boats eventually gave up, and the current got moving gain, we moved back in, “set anchor” with the trolling motor and resumed catching right where we left off earlier. It simply could not have been easier.

As noted earlier, I fish a lot of jetty walls for blackfish. While these spots offer some structure where a big tog can go into and cut me off, for the most part they are not what I’d consider super-gnarly. Due to this I can get away with 50-pound mono leaders for the most part, and when the bite gets tough, or the water is super-clear, I have even been able to get away with scaling down to line as light as 20 or 30 pounds for my leader without paying out in lost fish. However, fishing a wreck is a different game altogether as there are more caverns, holes and snags a blackfish can weave a leader into if you give them some slack, so light line holds no place in the equation. Even when properly geared-up, expect to lose some fish into the structure as it simply comes with the territory.

Fishing over this moderately-deep wreck, with a running tidal current, pretty much precluded the use of my beloved blackfish jigs. Try as I did several times, more traditional blackfish tackle was required. The rig for the day was simple; a 4/0 octopus hook was snelled onto the end of 80-pound monofilament with a dropper loop set about 5 inches back. The 80-pound mono was extended for several feet (The more the better thanks to the gnarly nature of the wreck.) where it was connected to the main line. I opted for a loop-to-loop connection to my 50-pound mono top shot, which was then attached to 30-pound braid, while others on the boat simply tied their 50-pound braid to a swivel that was tied to the top of about 6 feet of the 80-pound mono.

Where a moderate drag might be acceptable on a breakwall, going easy on the drag on a wreck is not going to end well as I verified several times that day. Just as important, however, is that too tight of a drag could very well result in a pulled hook. Anyone who has tangled with a big tog knows that once they approach and eventually exceed the 10-pound mark, they fight much differently than their smaller brethren. Rather than just giving that initial dogged try to get down into their lair, a big tog will fight you to the surface, and then make a hard pull back down into the depths that first time you see color. This up and down may repeat itself several times before you get a chance to slide the whitechinner into the net, and unless you have the drag set just right, you risk losing the battle. It is a fine line between enough slippage to protect from pulling the hook, but not so much that you can’t stop the last, most crucial feet of an escape attempt.

Perhaps just as important as the right drag setting is the correct rod for hunting big blackfish. Where years ago in the days of heavy monofilament line a pool-cue of a rod was necessary to offset the required sinker weight and stretchy line, with braid it is possible to get away with rods that look more like something that a largemouth bass angler might use. The braid has one drawback that I feel must be combatted in the rod, and that is its no-stretch nature during the battle. Sure this is good in feeling light bites, and the thinner diameter of the braid requires less sinker weight, but when combined with the proper drag setting the rod too needs to pair up the right combo of power and finesse. This is where I have found the slow-pitch style rods like the Tsunami Trophy Series Slow Pitch and the Maxel Platinum Slow Pitch are great options for togging. Match them up with a small reel spooled with 30- to 50-pound braid and you’re ready to do battle with togzilla this fall.