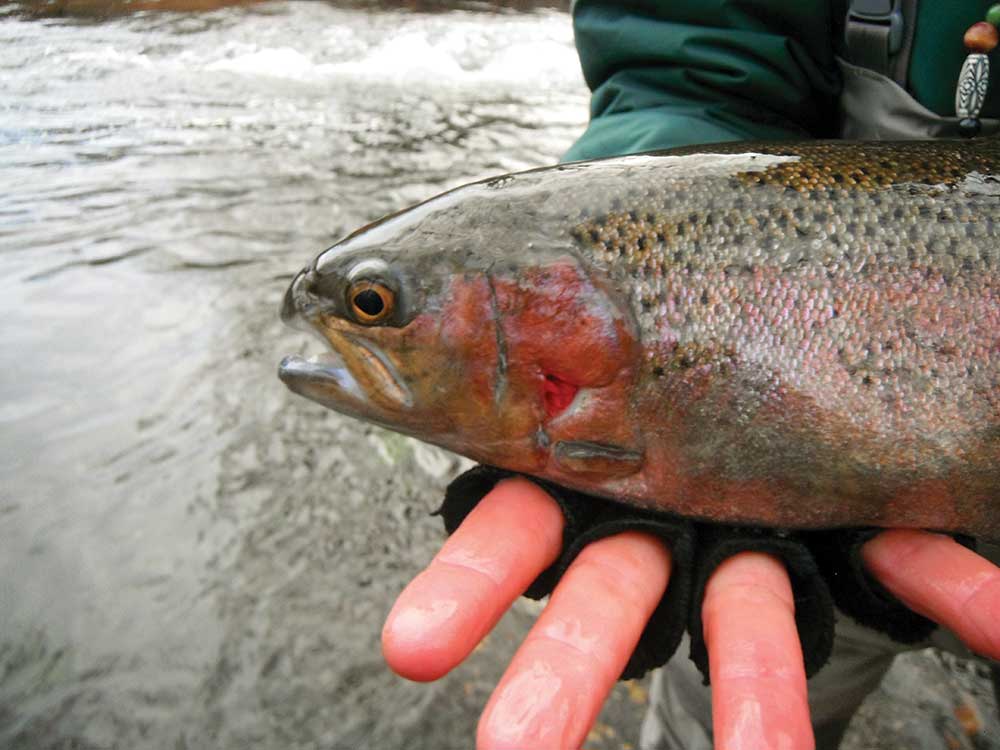 There was a time when the month of March was looked forward to with great anticipation by Long Island anglers. The third month, and St. Patricks Day in particular, signaled the unofficial opening of flounder season. Docks became a beehive of activity as anglers lined the rails of party boats, and reservations were required to ensure yourself a rental skiff from one of the many fishing stations spread around the Island, particularly Moriches Bay, where a dozen or so liveries once lined the bay’s shoreline. Launch ramps also saw an influx of activity as those with their own boats scrambled to catch their share of winter flatties. Even the docks came alive with anglers looking to put some flounder fillets on the table. In fact, the banks of the Shinnecock Canal would be lined shoulder to shoulder with flounder hopefuls once the bite was on.

Back then, trout season did not open until April 1. That day was an event in itself, celebrated by using up a sick day or in the case of youngsters, playing hooky with parental permission. But March was reserved for flounder, or if you preferred – cod were also a solid option at the time. These days, flounder can hardly be considered an option. With a season that runs from April 1 to May 30, and a two fish bag limit, which is no easy task to fill, few anglers look forward to flounder season. Codfishing has been erratic and inconsistent at best, leaving winter weary anglers searching for something to bend a rod.

Trout have helped fill that void for many anglers thanks to what has become a year-round season on most of the Island’s trout waters. An aggressive stocking program that supplements the traditional spring stocking with a fall stocking, and in recent years, the addition of 2-year-old brown trout to some of the lakes and ponds, have also fueled increased interest in the Island’s trout fishery. A combination of the previous fall’s holdovers, and a spring stocking schedule that kicks off in late March, have provided many “saltwater anglers” with something to do prior to the arrival and opening seasons for popular saltwater species like striped bass, fluke, blackfish, porgies and weakfish.

If you would like to partake in this fishery, a small investment in tackle and a freshwater fishing license ($25 for NY residents 16 and older) is all that’s needed to get you started. In many cases, you may already have an appropriate spinning outfit that will fill the bill. You’ll want a light or ultra-light rod and reel spooled with no more than 6-pound test. If you go ultra-light, go with 4-pound test at the top end. These outfits are well suited to our relatively small lakes, ponds and streams. At the terminal end, 3/8- to 1/2-ounce spoons, in-line spinners like Mepps, CP Swings and Rooster Tails to name a few, and small swim shads of 1-1/2 to 2 inches will all catch their share of trout. The go-to lure for many anglers over the past few years has been a small gold finished spoon. Swapping out the small treble hooks that come with most spoons and spinners with a single hook will make releasing fish much easier, and the trout will appreciate it. When it comes to bait, there is always the old reliable worm. Trout worms, earthworms and night crawlers will all catch their share of trout, as will scented baits such as those infused with Berkley Gulp. Some anglers find success with such simple baits as dough balls.

Among some of the more popular trout waters in Suffolk are Belmont Lake in Belmont Lake State Park, Carmans River and Hards Lake in Brookhaven, West Lake in Patchogue and Upper Yaphank Lake. In Nassau County, Massapequa Reservoir and Upper Twin Pond in Wantagh get a lot of play from trout fans. Each receives generous stockings in March and April, including a healthy number of 2-year-old brown trout measuring 12 to 15 inches.

Trout fishing regulations vary from region to region across the state, and there are also separate regulations for various bodies of water here on Long Island. In Nassau County, all ponds, lakes and streams are open all year, with no size limit and a 3-fish bag limit for all trout except brook trout, which are a catch and release only fishery.

Things get a little more complicated in neighboring Suffolk County where all freshwater lakes and ponds except East (Swan) Lake, Laurel Lake and Deep Pond are open all year with no size limit and a three fish bag limit. Trout fishing in East Lake is limited to April 1 through November 30 with a 10-inch minimum and a three fish bag. You may target trout in Laurel Lake and Deep Pond all year, but there is 12-inch minimum size limit and three fish bag in effect on those waters. For all of Suffolk County’s freshwater and tidal streams except those within Connetquot State Park, Caleb Smith State Park and Southaven County Park, you may target brown and rainbow trout all year with no minimum size and a three fish bag limit, while brook trout are catch and release only.

Trout waters within the three parks have their own set of regulations. Check with each park or get a copy of the New York Fishing Regulations Guide from DEC. They are also available at most license issuing agents, including Town Halls, or you can go here. The season in Southaven Park runs from April 1 through September 30. Fishing in Carmans River from the cement dam upstream to

Yaphank Avenue is fly fishing only. Spinning gear is permitted below the Cement Dam and in Hards Lake, where there is a 9-inch minimum and a 3-fish bag limit. Brook trout are catch and release in the river and lake. For more information on fishing in the park, call 631-854-1414.

Both Connetquot and Caleb Smith State Parks are fly fishing only but you should not be intimidated if you have never fly fished before. The Connetquot and Nissequogue rivers are ideal places to learn fly fishing and you can do it with a minimum investment in tackle – an inexpensive all-inclusive fly fishing outfit and small selection of flies will get you started, and there is a fee of $25 for a four hour session on the river. And if you have never been in these parks before, you are in for a treat. Connetquot River State Park is an oasis surrounded by the hustle and bustle of suburbia. The $25 fee for a beat on the river is the cheapest therapy you’ll find anywhere. As President Herbert Hoover once said, “Fishing cleanses the soul,” and a session on the Conny will certainly do that. You can reserve a session by calling 631-581-1005 for Connetquot and 631-265-1054 for Caleb Smith. Beats are issued on a first come–first serve basis on the day of your reservation.