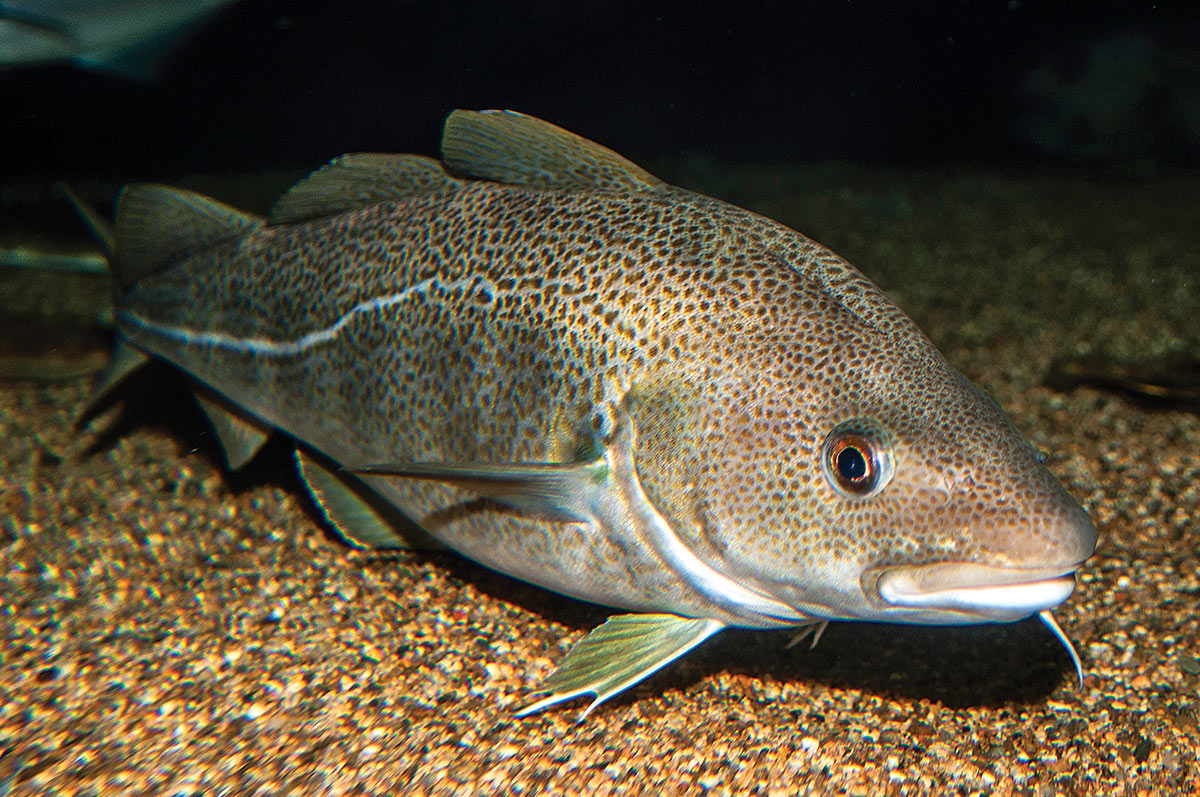 The Winter King has influenced history, politics and economics for the better part of five centuries.

Atlantic cod (Gadusmorhua) are members of the Family Gadidae that includes the cod’s close relativeshaddock and pollock.Atlantic cod are found throughout the northern Atlantic Ocean from Greenland south to North Carolina on the western side, through Scandinavia and the British Isles on the eastern side. They are a heavy-bodied fish with a large head, blunt snout and a distinct barbelgrowing out from the bottom of the chin.Their coloring varies widely, ranging from light yellowish-green to red and olive, usually with darker speckles on the head, fins, tail and body.  The belly is light colored and usually spotless.  Individuals can easily change color.Cod have an obvious white lateral line down each side of the fish, which has a distinct “hump” just before the gill plates. They are most often found between 150 and 300 feet deep, but have been observed as deep as 1,200 feet.

According to biologists with the Massachusetts Division of Marine Fisheries, Atlantic cod spawn in the winterand early spring near the ocean floor and swim offshore to reproduce.  They are capable of reproducing at 2 to 3 years old when they are between 12 and 16 inches long.Smaller females have around 2.5 million eggs, while larger females can produce up to 9 million eggs.Larvae hatch after 10 to 40 days, and are .2 inches in length.Atlantic cod can live more than 20 years and grow up to 51 inches and 77 pounds, although much larger ones have been recorded commercially.

Small Atlantic cod eat shrimp and other small crustaceans,and adults eat many types of shellfish, as well as herring, mackerel, capelin and young haddock.Pollock and larger cod are some of the species that prey on young cod.  Spiny dogfish, sharks and marine mammals feed on adult cod.

There are two primary stocks of Atlantic cod off our shores, the Gulf of Maine and Georges Bank. According to the 2017 stock assessment, the Gulf of Maine stock is overfished and below the target biomass level.A revised 10-year rebuilding plan was implemented for this stock in 2014. According to the 2017 stock assessment, the Georges Bank stock is overfished and is scheduled to rebuild by 2027.Both stocks are subject to overfishing, but fishing is still allowed at reduced levels.Each coastal state in the Northeast manages the Atlantic cod fishery in state waters within three miles of shore.  Beyond the 3-mile limit, where the majority of cod reside, they are under the jurisdiction of NOAA’s National Marine Fisheries Service and the New England Fisheries Management Council.

The typical cod rig consists of a high-low rig baited with fresh or lightly salted clam. Veteran cod fishermen are careful not to over-bait their hooks, which typically range from size 5/0 to 7/0 Octopus style hooks. Regardless of whether you fish mono or braid as your main line, it is strongly recommended that you attach an 8- to 10-foot trace of fluorocarbon leader material at the terminal end. Many cod sharpies also dress their baited hooks with brightly colored plastic skirts. Chartreuse, hot pink and blue speck are among the more popular colors. Others prefer adding a twister tail or jelly worm. In recent years, Gulp has proven very effective on cod, and some anglers pass on clam baits in favor of the Gulp. The 6-inch Gulp swimming mullet is the preferred bait, with pink being especially effective at times, but carrying several colors is good insurance should the cod favor a particular color during your trip. One of the advantages of Gulp is that it will help reduce annoying strikes from dogfish and eliminate the need to constantly rebait as might be the case with clam bait.

There are times, especially when cod are feeding on baitfish like herring, that metal jigs can be very effective. Always be prepared with a selection of chrome or gold plated jigs with a hammer finish ranging from 4 to 10 or 12 ounces. Adding a jelly worm teaser to a dropper loop two feet above the jig makes this rig doubly effective. Spicing up the jig hook up with a green or blue skirt is a favorite tactic of some party boat sharpies.

In the Northwest Atlantic the Atlantic cod fishery dates back as far as 1497, when John Cabot discovered what he referred to as “New Found Land.”  Cabot claimed that territory for the British.

Fast-forward over a hundred years when another explorer, BatholomewGosnold sailed to the New World in 1602.  The seas were so full of cod that he claimed the fish were slowing his boat down.  He named this area Cape Cod.

John Smith traveled to the soon to be Bay Colony in 1614 and fished and mapped the waters and shoreline of what is now Massachusetts and Maine.  Smith returned to England with 47,000 pounds of salted cod.

By 1640, the newly named Massachusetts Bay Colony harvested and sold 300,000 pounds of Atlantic cod.During the same time, Nova Scotia, Newfoundland and New England combined fishing efforts for the greatest amount of profit. The Nova Scotia and Newfoundland fishery took place during the summer months, as weather was too harsh to fish during the winter.  Fishing shifted south during the winter to New England, as this is the area that Atlantic cod were known to spawn.

From the 17th century forward, catches began to increase dramatically because of newer fishing methods, technology and larger and faster fishing fleets – not due to the cod biomass getting larger.

In the late 1980s, cod started to occasionally disappear from the Northwest Atlantic.  But, because this had happened before fishermen ignored the signs of stress as routine fluctuations of the population.On July 2, 1992, John Crosbie, the Canadian Fisheries Minister, placed a moratorium and banned any fishing for cod in the Northern reaches of Canada.In January 1994, a new minister, Brian Tobin, expanded the moratorium to include all of the Canadian cod stocks.During the same year, NOAA’s National Marine Fisheries Service determined that the Gloucester fishing fleet was actually twice the size of what the cod stocks could sustain. NMFS determined that the cod found off of Georges Bank was 40 percent of the biomass it had been in 1990.Cod stocks have started to rebound in recent years, but it is quite possible that they will never recover to historic levels.