The fall run is finally here, and October offers that epic reward after the long season: great fishing for a variety of species in the comfort of the temperate New England autumn weather. Those long, hot, ‘dog days’ of summer are gone and have been replaced by shorter, cooler days, gathering shoals of bait and hungry schools of gamefish running the rips and shorelines along our coast.

When we think of fall, we think of blitzes, birds diving and screaming in the sky above and hordes of hungry gamefish slashing through the abundant bait from below. But not everyone places bluefish at the top of their list.

The Biggest Blue Of Your Life!

What if I told you that you could catch the biggest bluefish of your life this month? I’m sure many of you are reading this and saying, “Why would I chase bluefish when big stripers, big tog and albies are available?” Let me explain. For starters, bluefish have a vicious attitude and they feed with a level of malice not seen in other Northeast species. It’s almost as it they hate the baitfish that they are feeding upon! I think bluefish are the most savage hunters that swim in our waters and they are grossly underappreciated and underrated as a gamefish.

Ask yourself this: do you love fast-paced blitz fishing with epic topwater explosions, acres of bait being crushed by angry gamefish and fish that will battle you to the last inch of your leader? Of course you do! How about the visual stimulation of watching big, mean fish shredding every baitfish in their path, sending sprays of terrified bait into the air with each focused attack? Of course you do! Or, what about having your plug hit so hard it almost hurts before the beast at the other end tears 50 yards of line in five seconds? Yes, yes, of course you do! Targeting big fall bluefish should be a no-brainer for anyone that loves to fish.

If that didn’t get you fired up to target gator blues, maybe this will. One morning last October, it was around the full moon, I was steaming home from a Block Island bass trip with one of my buddies. We had been out all night and the fishing was awesome. I was just sitting there on the portside gunnel, talking about the great fishing we had, watching the island fade into the fog as we continued run north. In my head, I knew it was likely to be the last Block Island run of the season, the weather windows were getting fewer and further between and the water temps were dipping lower by the day. Our conversation stopped and I started to reminisce about all the great trips we’d made together, with the motor droning and me drifting into a daydream, I dozed off.

Then I felt a tap on my arm, “Dude, there’s big fish on this school of pogies!” I instantly snapped back into the mode. Jumping to my feet, I grabbed a rod and snapped on a 9-inch Jigging World spook, all bets were off, I wasn’t tired anymore and it was go time! Before we could even fire a cast, the water exploded into full-on mayhem. Suddenly there were bunker everywhere and the jaws of monster bluefish were snapping all around us! I knew this was the chance I had been waiting for, to hook a true crocodile.

I whipped the spook out there as far as I could into the fog and started walking the bait back to the boat—my eyes and ears on high alert, waiting for a smash. Then, out of nowhere, the plug disappeared and the drag started peeling. “Dude, you have a giant, and I mean GIANT on there,” my buddy said, “I saw it smash your plug!”

The fish took off on a blistering run, complete with heavy head shakes and wild directional changes. I couldn’t help but laugh like a little kid because I was so excited, but I also wanted to cry because my arms were like tin foil from fishing all night and being up for about 35 straight hours! I had to put the fatigue out of my mind and battle this massive bluefish, since it was the opportunity I had been waiting for all year! I just wanted to see this fish, luck was on my side and after a few more minutes of battling, I landed the beast. As soon as it hit the deck I knew it was the one I had been looking for and she pulled the scale down to 22 pounds! The true moral of this story is that anything can happen, anywhere and at any time during the fall, you have to be ready for anything. But finding 15- to 20-pound bluefish in the middle of nowhere isn’t exactly something we can count on. 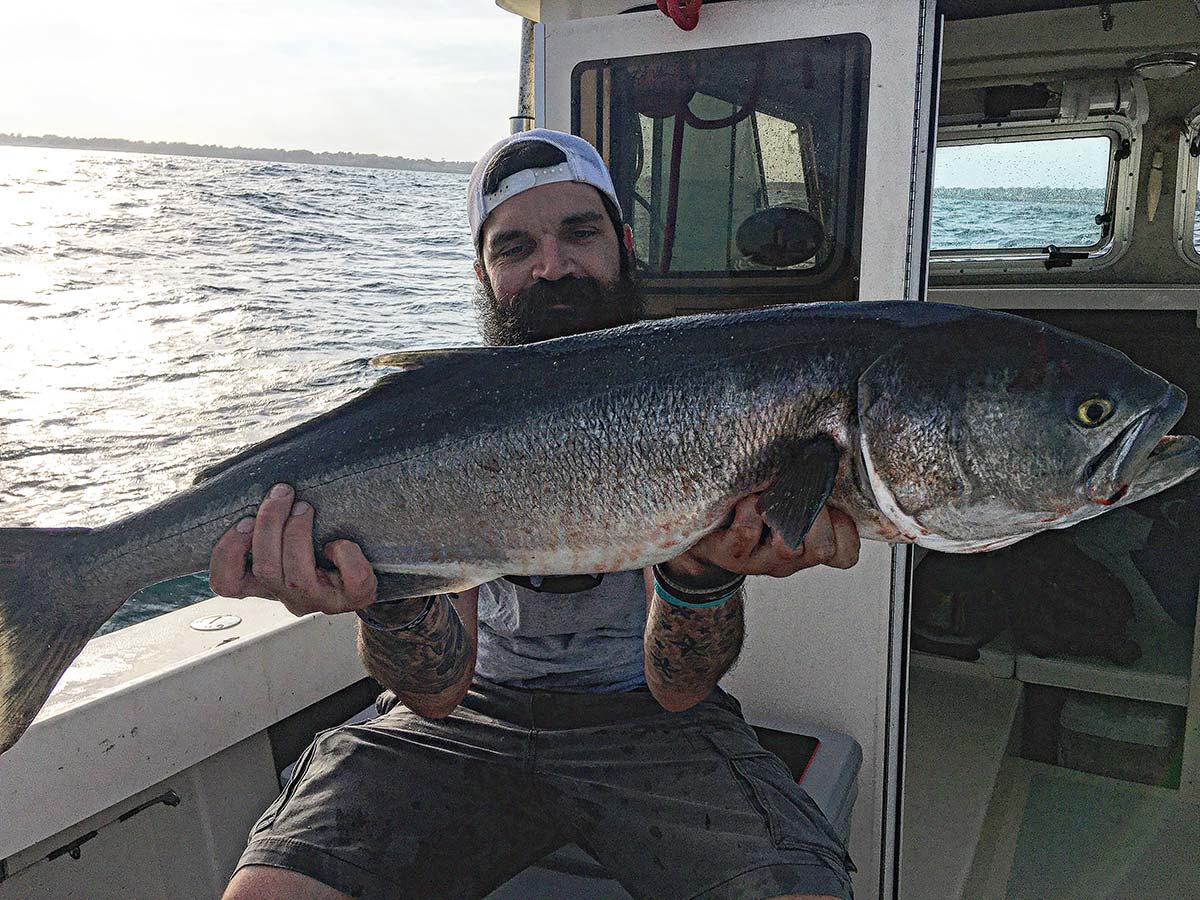 In the fall, I stop focusing on deep structure for big blues and follow the bait instead. When the water begins to cool and days continue to shorten, their mode shifts to packing on the calories. It doesn’t matter what kind of bait you find; peanut bunker, adult bunker, squid, snapper blues, mackerel, sand eels, spearing or another species, the only thing that matters is that there are good numbers in the area. These fish will eat anything, and they are typically not selective or shy about it; I have seen them spit up chunks of sea bass, scup, lobster, fluke and herring along with all the baits already mentioned and I’ve had wooden plugs sawn nearly in half during long battles. I’m just waiting to find one with a license plate in its stomach! I also caught a blue that had four leaders with hooks attached in its mouth! Are you beginning to see why I have labeled them the most savage fish in the Northeast?

Once you find the bait, it’s a waiting game or a game of musical chairs that will put you on the fish. Sometimes it takes a few days for the big blues to find the bait and you just have to stay diligent about knowing where the bait is and keep checking back for gators. Other times, you’ll find the schools being harassed and then you just have to keep moving around until you find the school that’s being thrashed by the crocodiles.

I keep it simple when it comes to rigging for big blues, I don’t use steel leaders, I use heavy mono (60- to 80-pound test) and favor larger lures that (usually) keep their teeth away from the line. There’s no reason to get fancy with plugs, save your custom wood for stripers. I typically throw, larger, durable plastics like the Jigging World spook I mentioned earlier, Yo-Zuri Surface Cruisers, Roberts Rangers, North Bar Flying Squid and tins like large Kastmasters and Hopkins. Do yourself a favor and switch out the hooks for inline singles or, better yet, remove the belly hooks from the plugs and just use a single rear hook.

You’ll hear people call them all kinds of things from ‘yellow-eyed devils’ to hellhounds to choppers… I call them shredders. Call them what you want, bluefish are the most aggressive and hard-fighting fish, pound for pound, that swim in our waters. And it doesn’t matter if you’re a seasoned charter captain, a hardcore recreational or a novice new to the sport, bluefish never disappoint. If bluefish grew as large as striped bass, every saltwater angler in the Northeast would be obsessed with them. But put a 22-pound striper against the 22-pound gator I caught and the bluefish would win that battle 100 times out of 100, without breaking a sweat. Blues have a reputation as tackle destroyers that are only good for tackle shops, take some time to reintroduce yourself to these savages of the sea this month, I bet you’re going to see the light. 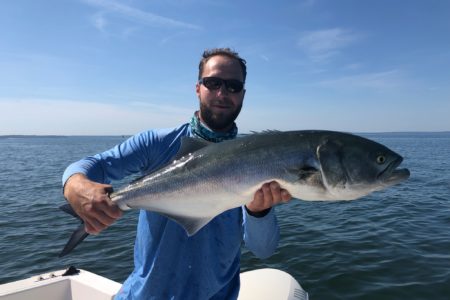