Take your togging on the road this month in search of personal bests.

A dedicated and slightly crazy group of toggers line the rails of a few boats that specialize in winter tautog. They have their special rods, reels and rigs that they feel give them their best chance of actually landing a new “PB” – personal best.

Starting in mid-December, the crowd thins. The melt off from the first snow fall will usually dim the lights. The bite will all but shut down usually by late January off the New York Bight, a sign for many that it’s time look south where several boats continue to sail through the winter from Maryland and Virginia, weather permitting.

The percentage of very large fish is higher as you travel down the coast. Southern fish have a much longer growing cycle per year, as they do not “hibernate” as their northern brothers do. They eat and grow 12 months a year; off the Jersey coast it’s maybe nine months, whereas up in Massachusetts perhaps it’s just seven months. So a 10-year-old Rebel tautog will be approximately 40 percent larger than his same age partner from Beantown! This exactly, is why we wait for this most wonderful time of the year, and a legit shot at a new PB! That double-digit number that drives toggers to work harder and fish more in hopes of getting that one good bite.

On the Road Again

While boats are still sailing for tautog out of New Jersey ports in the first couple of months of the year, as you travel south on the road to blackfish greatness look for certain boats from Indian River Inlet, DE to Ocean City, MD, down into Virginia as well. Every captain has a passion, and what you’ll see on a good tautog boat is two anchors off the bow; what you won’t see is the amount of wrecks in his machine. Togging is hard work for the captain and mate. These “super fishy dudes” are living legends in my eyes, and if I’m lucky, I may learn a trick or two on each trip with them. Some of these tips are shared with you in winter seminars and articles like this one, others simply need to be experienced to be fully understood. 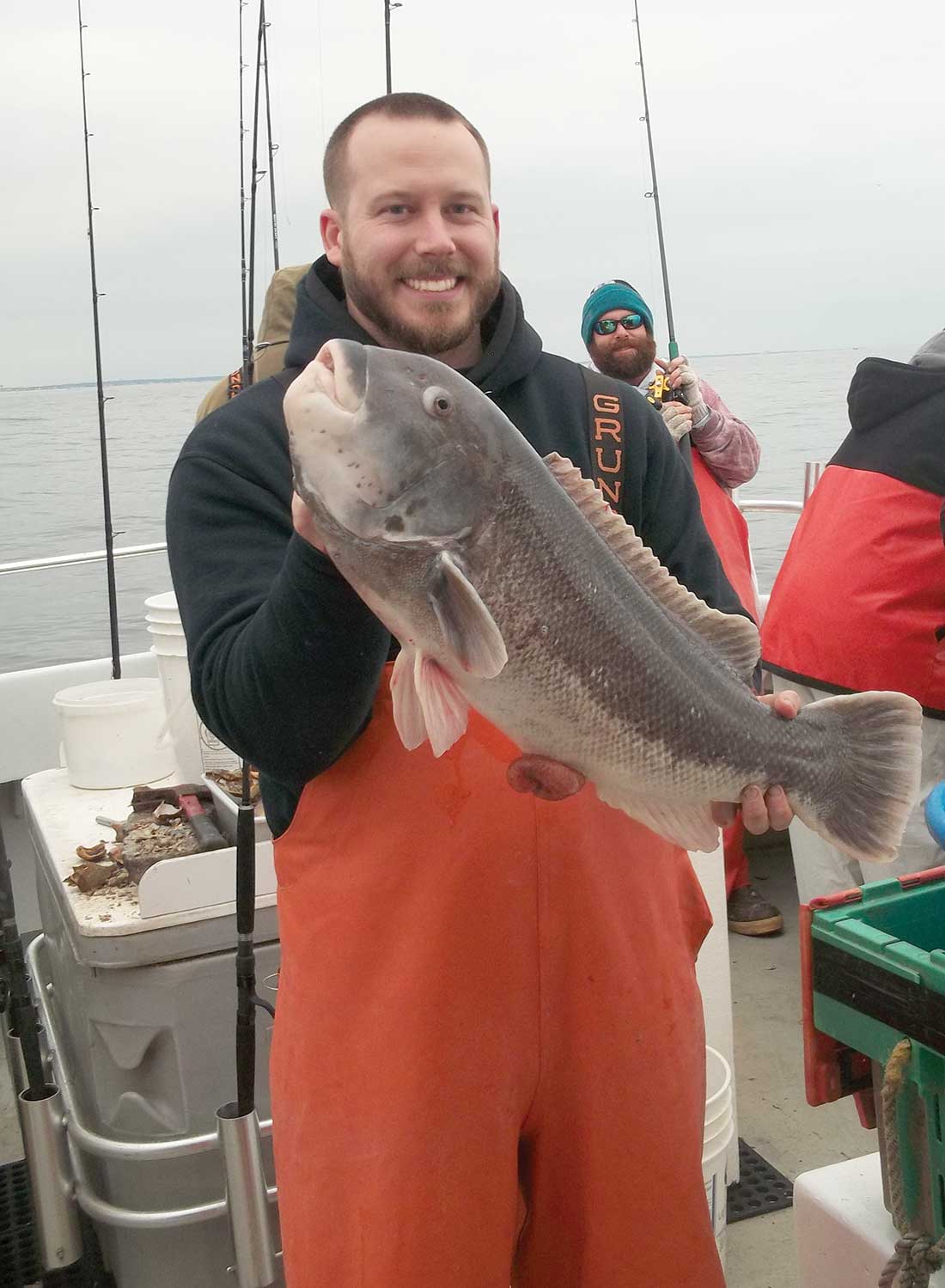 These boats have some amazingly skilled characters on them, many who earn their spots on the boat like an All Star in the NHL. Honestly, they are some of the very best fishermen that I’ve ever seen! The downside is the only way you get to fish with these folks is to fish on these boats that are often booked years in advance. So, the best I can do is to share some of their knowledge with you.

I know of guys who’ll leave New York City at 1 a.m. to make it to their boat of choice by 5:30 or so. Some crews opt to drive down the day before and spend the night in a hotel near the marina. Best advice I can give is to ask your captain; not all hotels are open year-round in these shore towns, and it’s often the same story with restaurants and tackle shops. Bring everything that you need for the trip, as you may find these beach towns closed up for the winter.

Jiggers should really just leave their rods at home on these trips. There, I said it! After speaking with the best blackfish jiggers I know who have spent days fishing the jig in southern waters, they suggest that the combination of depth and current is simply not conducive to fishing the jig. Many days you can’t feel the bottom, or the bite. While I’m not saying it is impossible, it’s certainly not like fishing a jig in shallower waters. That said, this is a rig game, but you’re going to have to upsize your tackle just a tick; I suggest 80-pound top shot, 80- to 100-pound leader material on your rigs, and 5/0 through 7/0 Owner octopus cutting point hooks as the way to go. And be prepared to fish 10 to 16 ounces of lead all day long.

Your “Big Fish Stick” should be in the 7-1/2- to 8-foot range and should handle the weight as needed when you’re flipping away from the boat and working the bottom back to you. Your rod should be balanced and comfortable to hold while you fish a slack line. There are many great reels out there, Daiwa, Shimano, Maxel, Okuma, Avet and Penn, to name a few. Try to stick with this plan when selecting a reel – small and very strong, able to hold 150 yards of 50- to 65-pound braid. I like multi-color Daiwa Saltiga Boat braid in 55-pound test as the color lets me warm my hands on the drop until my bait gets near the bottom.

Big blackfish break stuff; rods, reels, line, leader, hooks, I’ve broken them all. Use the best gear that you can. Good gear will cost big money, but it’s worth the investment on these trips! Maybe you save up for a long time. Maybe you have a special birthday or anniversary coming up? What better gift than a new tog rod?

Baiting up a slider rig with two nice halves of a white crab gives them a couple of baits to be eaten. One large crab makes one nice large presentation, but if it gets chewed and you miss, the bait that’s left on your hook is usually a chomped-up mess. With hooks no longer in position to catch a lip, perhaps two halves is better? 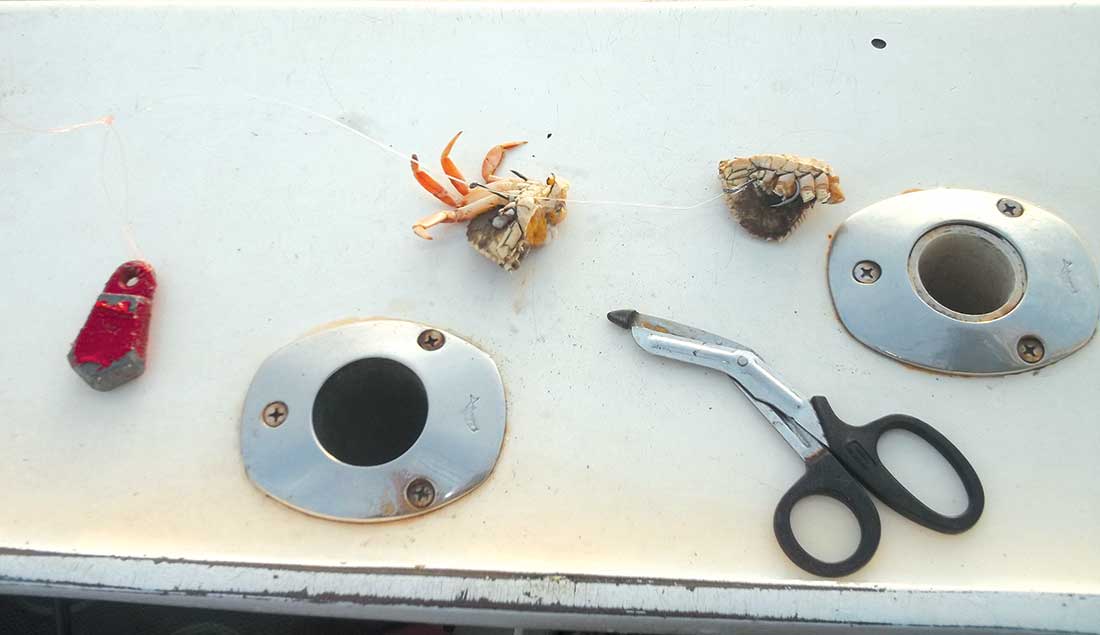 One of the first things I do when I step aboard is to check out the bait. Ideally, a mix of small, medium and large white crabs makes a great offering throughout the day. Two small whole crabs, one on each hook, two medium halves, or one whole medium and a medium half. Basically, two halves of a large crab is how the rotation goes until we see what they want to eat this day. Maybe my baits fall on the deck and I step on them a bit, by accident of course! Mix it up a bit, just don’t drop the sinkers on deck if you can avoid it.

The Touch, The Fight

Southern wrecks don’t often feel like the hard bottom we are used to feeling up north. These southern wrecks are often covered in anemones, and a layer of these will make your sinker feel like it’s bouncing on a soft sand bottom. So you’ll need to mentally adjust your game accordingly. Learn to fish a “slack line,” and do not bounce your sinker repeatedly on the bottom, since this will often send the blackfish in another direction. When your sinker is on the bottom, keep your line taunt, just not overly tight. Learn to adjust and you’ll be able to feel every tap.

When you do get the first hit from a blackfish, it’s time to move your rod into the get ready position. While fishing a slack line may sound impossible, trust me when I tell you that it’s the only way to go. You are not hyper tense, swinging on every tap, but rather you’re waiting for the action to begin.

Oh, I should tell you that big blackfish have tricks too. They sometimes start off with small taps feeling like a baby tog would as it finds your bait, then suddenly stops. Did a monster tog just push the little guy away? If he has a mouthful, he may be resting his chin on your bait protecting it from the other fish stealing it. If you feel as if you’ve lost bottom, swing! Maybe you get “the wave,” but big fish sometimes give this sensation that a swell is quickly hitting your line, so swing!

Tip pointed down, ready for the telltale “whomp, whomp, whomp” that we all hope for. After he’s chewed a bit you set the hook with all that you’ve got. Rod pointed straight up, swift and strong. If you’ve connected the rod butt moves in front of your body, left hand on the fore grip as you reel as fast as you can with your right hand until he stops you. When he’s off the bottom, move your rod butt under your arm, and the rod into more of a horizontal position. The heavy power in the middle and butt section of the rod is made specifically for this stage of the battle. If the fish surges toward the bottom, bow the tip a bit lower to try to absorb the surge.

Whatever you do during the battle, do not pump the rod! Use the boat’s movement to gain line but never pump the rod. As your prize shows deep color, slow it down. Now is not the time to panic; breathe, and never get the fish’s head above the surface. When the mate is beside you, ask him if he is ready. Direct the fish toward him and stay out of his way. When the fish is in the net, point your rod tip up and put the reel in free spool to gather the situation. Now’s the time for pictures and handshakes! Get her in a tote of water and see if she can be let go; some may be able to go in a few minutes, some in an hour.

More large fish are lost due to bad fish-fighting technique, than are lost to bad gear, any day. But proper technique coupled with excellent gear gives you the very best chance of landing the giant of your dreams. Just remember that every drop is practice for your fish of a lifetime. New top shots the night before, meticulous rigging and knots, attention to baits and presentation. Every single fish is practice for a truly monstrous, personal best. You’ll have zero time to think when the time comes; do it perfectly, and with a little luck, you may land him. Your goal is “auto pilot” every time you set the hook, especially as you’re hunting those Rebel tautog during the winter months. 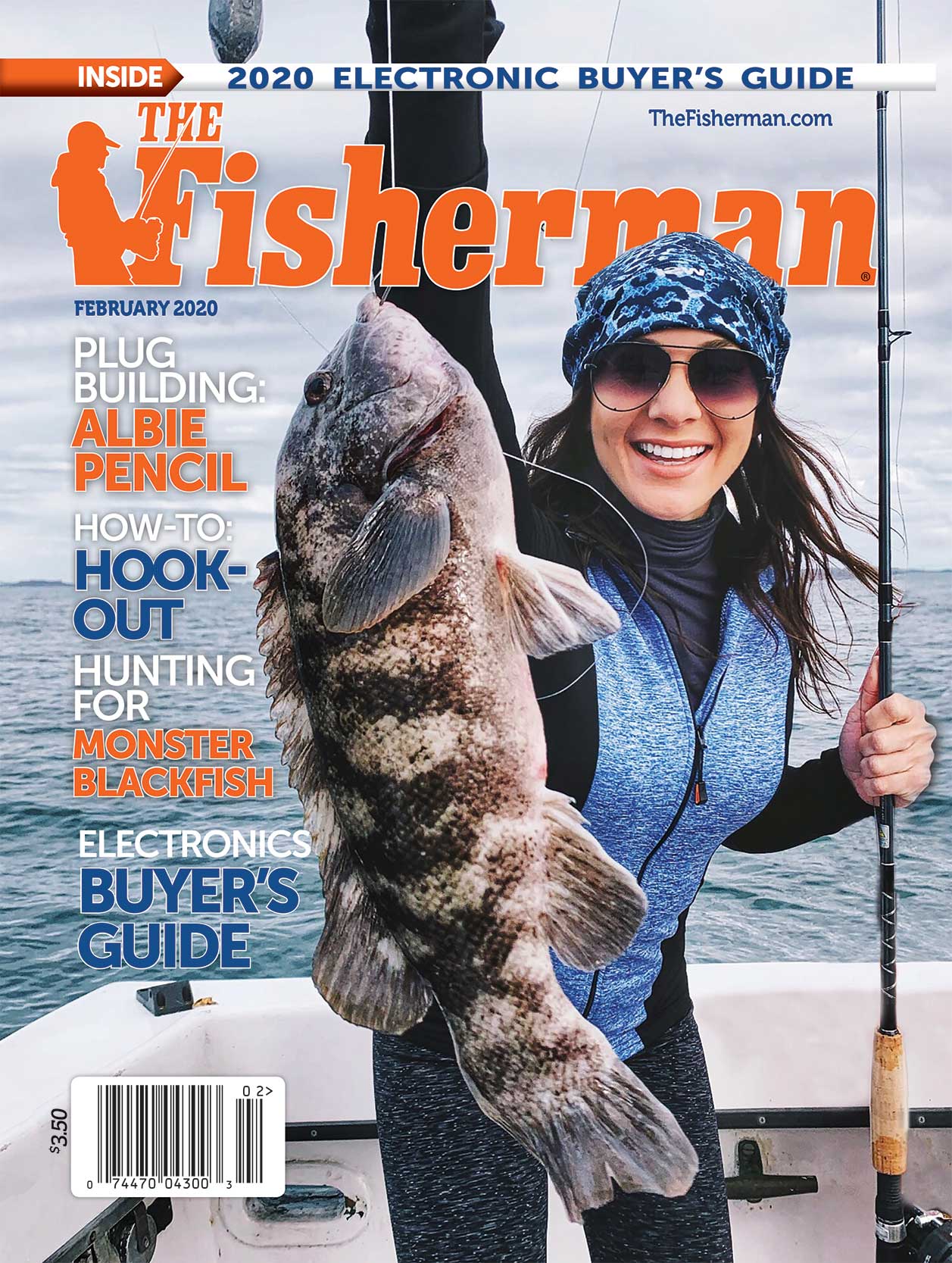