It was soon after the fluke population started to rebuild when I was introduced to rugged bottom fluke fishing by Captain Steve Witthuhn, now of Top Hook charters at Montauk. Like everyone else when the fluke fishing picked up, we fished open sandy slopes for fluke and also like everyone else caught shorts, shorts, and more shorts. One day the action was really slow and Steve suggested we make a change. “I want to drift through the boulder fields off the point and see what we catch,” he said. So, we did.

Although I was interested in plying different ground, my enthusiasm was crushed when I lost two rigs on one drift. We made another drift and although I didn’t lose a rig, I also didn’t get a hit. However, about halfway through the drift, Steve seemed to hook up. I say seemed to hook up because I thought he was snagged on the bottom. “No, no, this is a fish,” he said. At that point, I saw his rod tip bouncing all over the place, and I believed him. That fluke weighed 9 pounds — what a beautiful doormat.

That was June, and in September I had further conformation about the link between rugged bottom and big fluke. I was casting bucktails for stripers off the end of a point in the western Sound. Now, all Sound points are boulder-strewn — a present from retreating glaciers about 10,000 years ago. There were oodles of peanut bunker schools passing the point in the rip on the out-going tide as I picked away at teen-size stripers. The boulder field made me work with an 11-foot rod, a very tight drag, and heavy line in order to wrestle stripers out of the boulders. Thankfully, for the most part, I succeeded. Then, as I retrieved the bucktail I felt a hard thump, but there was no run from a striper. Instead, there was a lot of weight and just an occasional run of a few inches. That fluke was seven pounds.

There are obviously a lot of pros and cons related to rugged bottom fishing, and the chief con is you lose some of the big fluke you hook. There are also the rigs lost, the time spent to retie that frustrates us all, and the constant threat of bouncing the boat off a boulder. The positives aren’t really positives, rather a single one; doormats lurk among the boulders. In the end, it’s about choices.

As I’ve offered many times, the particulars of angling such as where and when you fish come down to a choice; a Hobson’s choice in this case because the options are not equivalent. Typically, we want to catch a lot of fish and the choice has a single element. For example, if my goal is to catch giant porgies, then I should hop on a party boat that fishes ocean wrecks. But since I don’t enjoy deep sea fishing, I stay shallow and fish with light tackle, catching large but not jumbo porgies. To me, the fun’s the same and the only difference for me is the venue.

In a second example that’s closer to the fluke choice, several elements enter into my decision, resulting in a non-equivalent choice. I love striper fishing, but my first love is surf fishing. Now, if I went live lining on a boat with Rich Lazar in June, I have an expectation of catching a large striper, but not many of them. On the other hand, most of the time my surf excursions produce school bass, and they are often quite plentiful. My choice is not equivalent because it’s surf versus boat, large fish versus small fish, and numbers versus one or a few.

Regardless of species, many anglers prefer to seek the biggest specimens but to succeed they must make concessions. If you’re a surf rat and want to catch big stripers, then you better fish night tides most of the season. That can get difficult if you work, have children, own a house that needs tending, are involved in community service, and enjoy friends who like to do things other than fishing. Admittedly, it’s a tough juggling act. I know, I did it for the better part of 30 years.

Another concession involves the number of fish caught. If you want to catch numbers of fluke in Long Island Sound, it’s wise to drift the open bottom slopes away from the boulder fields. Likewise, if you decide to drift among the boulder-strewn shallows, then one or two big fish would be a good day, and doing so requires persistence and perseverance. I know lots of anglers who set out equipped and dedicated to catching doormats but give up after a few attempts because the action is so slow. It’s a choice that requires some thought before you chose.

Remember too, there are fewer big fish than small ones. It’s natural because in saltwater, trophic dynamics (food chain) are different than on land. In the salt, there is a huge crop of phytoplankton each year and in some spots, these yellow-green blotches are so large they can be easily spotted from space by astronauts and satellites. Phytoplankton blooms are quickly followed by blooms of zooplankton such as copepods, krill, and other small denizens that feast on the plants. In turn, many animals feed on the combined plankton, including everything from newly hatched fishes to the largest animal to ever live on earth — the blue whale.

In short, a good part of the food chain is based on animals eating other animals in a sequence where at each succeeding level the animals are larger than the last, but also less numerous. Thankfully, Nature provides for success by producing incredible plankton blooms and large spawns of fish. As each spawn grows through its life cycle, the size of the population diminishes. This is also true for fluke and by the time a year class of fluke reaches doormat size, most have been eaten by other animals, killed by diseases and parasites, or harvested by humans for food.

Land-based food chains are different than sea-based ones because most land plants are there all the time with only a few seasonal forms such as grasses. For the most part, on land Nature produces lots more plants and fewer animals. However, each year there is enough to replace the old, sick, as well as those that have been eaten by animals. Let me offer an example. There are about two million wildebeests that make up the herds of the Serengeti Plains in Africa, and they migrate north and south each year to find fresh grass. They lose about a half million members each year due to lions, crocs, drowning, old age, and diseases. The lost members are replaced with roughly an equal number of new wildebeests each year and the size of the population stays more or less the same. Now, consider striped bass. A single large female can produce millions of eggs and many will hatch, and that’s only one female. Multiply this by all the females and then times an average number of eggs produced and one gets an idea of the incredibly huge number of newly hatched stripers there might be each spring. But unlike a wildebeest calf that is born large and can run within minutes, striper babies are minute and vulnerable, and every predator larger than them begins to eat them. On the other hand, wildebeest babies are so large at birth that each mother has a good chance of seeing her single calf reach sexual maturity.

The sea is a different world with different rules. All of this is to point out a reality — if you want doormat fluke in Long Island Sound on a regular basis then you have to pay the price and suffer the consequences that may include small catches and a need to fish over rugged bottoms such as boulder fields, reefs, and around wrecks.

Okay, let’s assume you have made your choice, and gosh darn it, you have assumed a posture of determination to fish for doormats until you catch them regularly. You are no longer content for a one-time doormat caught on the open bottom that results from a piece of good luck. The choice is one thing, but gear is another. So, the first thing to do is gather your heavier bottom tackle together because if you insist on using light tackle you are going to be angry, frustrated, and unsuccessful.

You’ll need 6- to 7-foot conventional rods with medium power and a medium action. Second, you’ll need revolving spool reels — perhaps a Calcutta 400 or a reel similar to it. Third, spool the reel with 30- or 40-pound braid and attach a mono leader of at least 30 pounds. The strength of this gear is not needed to handle doormat fluke, rather avoid abrading your line as it rubs on rocks and debris, to have enough power to pull rigs and bucktails out of moderate snags, and to dissuade big fluke from running into and under obstructions. The heft of the tackle does reduce the fun of the fight compared to lighter tackle but is necessary in order to boat fish and spend a lot less time retying.

Isn’t there always one more thing? This one more thing is also an added problem. The best boulder fields have some current flowing through them because the big fluke can easily lie in ambush waiting for the tidal current to bring food to them. This way they conserve energy since they do not have to swim looking for food or chasing it. However, the current often contributes to the problems of snagging and hoisting fish out of the rubble.

Many years ago, I fished with Rich Tenreiro out of Manhasset Bay, and one of his favorite spots for big fluke was at the SUNY Maritime College at the north end of the Throggs Neck Bridge. He preferred the narrow zones between the ships where there was some current. In addition, over the years, various pieces of debris found their way into the water making the bottom quite snaggy. We caught big fluke, caught bottom a lot, and sometimes were frustrated by wind, current, and bottom junk. It was a trade-off we believed was worth it.

As you are aware from many of my previous articles, I prefer light tackle bottom fishing, so my experiences with rugged bottom fluking have been limited but not without many lessons. I’ve done it a few times, as mentioned above, as well as with Captain Tom Mikoleski in Montauk’s south side rocks. I can’t say I would prefer it on a regular basis, but it does have its charms.

First, an angler can catch big fluke, second, there’s an added excitement because the angler must focus on more than just the rhythm of the jiggling bucktail or the roll of a sinker with a baited hook, one must also focus on the feel of the bottom and react quickly to the first hint of a snag in order to avoid a good percentage of the hang-ups. I like catching fish and most days I value numbers over size, but once in a while, whether it’s a large striper or a doormat fluke I’m willing to forgo the pleasure of numbers for one or two giant fish. 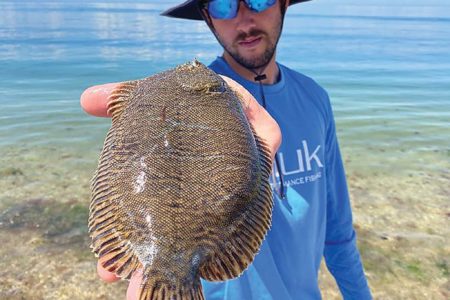 Fluke Or Flounder? Or Perhaps It’s A Halibut!