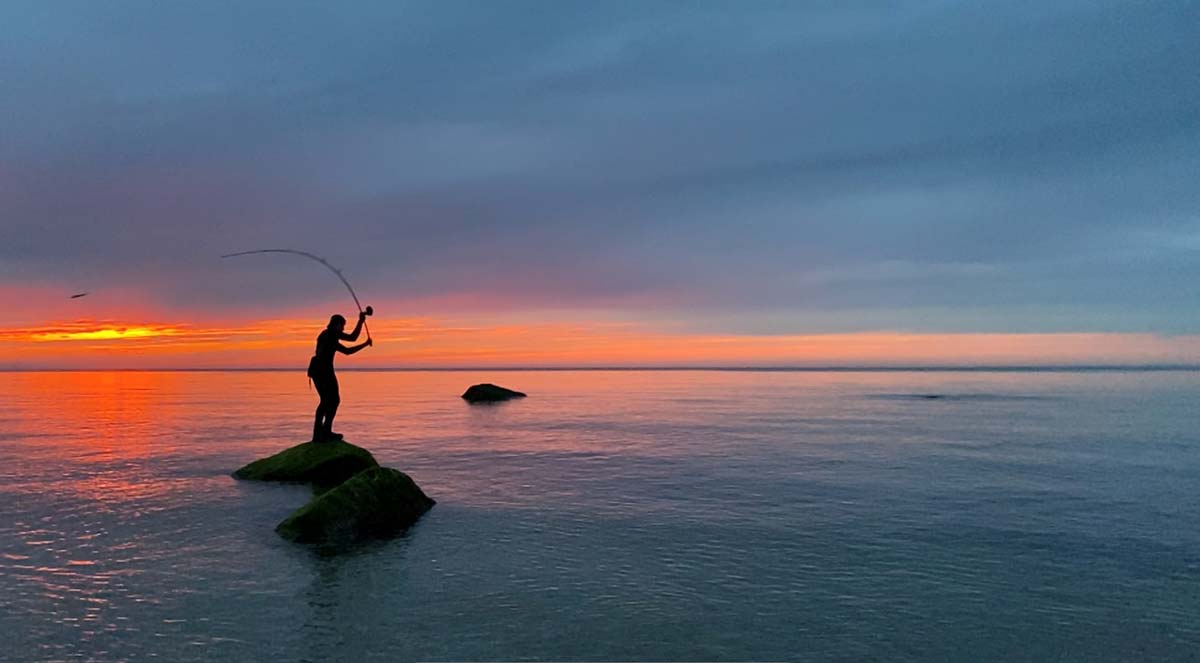 Being prepared and keeping things simple can help you adapt quickly to a variety of surf fishing scenarios.

Surf fishing during the month of October has always been the climax of the fall run in my eyes. The waters are warm but not too warm, the outside air temperatures are cool but not too cold, there are a variety of baits piled up along the outer beaches, inlets and back bays, ready to book a trip south with migrating gamefish hot on their heels. October has been the wild card for the past couple seasons. The baits are always changing, the weather patterns seem to have been out of whack, and the structure around which fish congregate have changed from season to season.

The bites have been less consistent over the past couple of years, which has resulted in the need to alter our tactics and approach to the surf game to allow for more versatility and flexibility – tactics that allow me to rule out or take notice of what the fish want for that night’s or day’s tide. I can go from fishing a jetty tip, swinging bucktails to an outer rip for an hour of tide and then be casting plugs on the sand beach wash the next, or be creeping along swimming plugs in a back bay if all else fails.  This is what it has come down to the past couple of years for the month of October for me, and the end results have been quite satisfying.

Trending Through The Month

An ongoing trend for the beginning of October has been fairly warm weather – warm enough to not feel like fall is upon us. At this stage of the month the warm weather baits are still around. With water temperatures remaining mild, most of the baitfish that you would find in September are still in play. These warm water baits include mullet, snapper blues, juvenile weakfish and the usual bunker (both peanuts and adult). These four baits are excellent big fish baits and can fuel exceptional bites. Big profile lures are key at this time of the month and I would make it a point to get in as many tides as possible in order to connect with some quality fish.

By the middle of the month, some of the earlier baits would have departed the surf scene while some still stick around. For instance, bunker will remain available as well as juvenile weakfish. Meanwhile, mullet and snappers would have already headed south. With the cooling water temperatures, there are openings for the arrival of new baits in the wash that fuel classic fall run bites, and that bait would be sand eels. Once the sand eels arrive, that is the telltale sign that the fall run is in full swing and there’s no turning back. Slender profile lures will be added to my bag at this time in order to match the hatch.

By the end of the month, the baits that will be present come back full circle to the large profile, big bait selection. There will still be the presence of sand eels and bunker at this time, but by now, we may also see the arrival of herring in the wash, as well as shad. All of these oily and shiny baitfish are excellent big fish baits and can fuel epic late season bites.

To be confronted with this much bait and such a variety of baits in the water, one can easily become overwhelmed. Some casters pack as many lures as they can in order to cover this gourmet of baitfish, and to meet any scenario they might come across. However, over the years I have realized that is not really necessary. I resort to the term K.I.S.S. (keep it simple stupid) which in turn lends itself to making you more efficient and mobile in the surf.

Most of these baits are bulky in profile so something that comes close to the resembling this look is for the most part, all you need be concerned with. Take for instance mullet and snappers. Both take on a profile that normally ranges from 4 to 6 inches so arming yourself with plugs in that size category is a good place to start. They also have a silvery/gray, blue or white coloration, so the lures you chose should fall within those three colors. For juvenile weakfish and bunker that emit a gold/silvery or yellow color, lures of similar shades are the way to go. Shad and herring feature a large silvery/gray profile, so larger offerings are better suited to imitating them. Sand eels may be the only bait that is uniquely different in profile, and their long slender profile can easily be imitated by a few lures.

The selection of lures that I like to carry along during this part of the season include the Super Strike Zig Zag Darter, Super Strike Little Neck Swimmer, Cotton Cordell 7-inch Redfin, Yozuri 5-inch Mag Darter, Diawa 6-inch SP Minnow, North Bar Jr. Bottle Darter and a few densely tied bucktails with Fat Cow strips. All of these plugs are meant to cover the field of the big baits that will be present at the time, so they should remain in your bag during this period. As for lures to cover sand eels, the Super Strike Super N-Fish is a dynamite imitation, as well as any other slender needle fish lure. I carry a few sizes and weights in order to be prepared for a variety of conditions. I also carry a few Red Gill teasers for when the fish get picky. These small rubber sand eel teasers can fit easily into a leader wallet. All these baits are known to draw big bass so I make sure to check over all of my terminal end connections, like hooks and split rings because their failure can cost me a good fish. Also use only the highest quality hooks, snaps, swivels and split rings. Saving a few nickels on these items is foolish and can be costly in the long run. Especially when fishing areas with structure, I want strong hooks and hardware that won’t fail if I have to turn a big fish.

Now in order to be efficient, that means there should be less time wasted changing out your gear to fish a different spot or scenario and more time casting.  Over the years I’ve really narrowed down what type of tackle I use to apply these various tactics in the surf. Take for instance the rod. If I’m fishing the sand beach and know I may wind up fishing a jetty, I want a rod that can handle weights as little as ¾-ounce all the way up to 3 or 4 ounces. I have found rods rated for 1 to 4 ounces, but if you really wanted to, you can cast a ¾-ounce bucktail with no problem. The rod of choice for me is the Lamiglas GSB 120 1M, that’s a 10-foot, medium action rod which matches up nicely with a Van Stall 200 or 250, or any 5000 to 6000 size reel. As for the line, I use 40-pound original Power Pro. With this line I am confident I can stop a big fish in an inlet current, while also being able to get good casting distance when fishing a sand beach.

As for leaders, I use a 36-inch length of 50- to 60-pound test mono with quality Spro barrel swivels and 125-pound Tactical Angler clips. With this outfit, I’ve been able to enjoy the fast paced school bass bites of October as well as tangle with some of the cows that patrol the surf line at this time. By having a versatile set up like this, I can quickly adapt my tactics to the situation, like going from fishing an SP Minnow on a sand beach, to drifting a 3-ounce bucktail through a jetty rip. I have the ability to stay at the water’s edge instead of wasting valuable fishing time running back to the truck and changing out gear.

Being efficient means you are ready for any change of plan. Take for instance a night I fished an East Hampton beach that was adjacent to a jetty. I had plans to fish the beach that night and found some nice water close to shore with a deep trough. As soon as I got there, the bite was great, with fish into the teens on 7-inch bone Redfins. The bite lasted for about an hour before coming to a sudden halt. Instead of just casting to dead water for the rest of the night, I had a hunch that the fish may have moved off to the tip of the adjacent jetty. Relocating to the jetty’s tip, I clipped on a white Super Strike Bottle Plug and was immediately back into fish. Without a key piece of equipment I would have not been able to make this call, and that essential piece of equipment was studded boots. I have been through a few pairs and brands of studded boots and have narrowed it down to a pair of Simms boots with after-market studs, that I’ve found to be light weight and quite comfortable. I wear these boots over my stocking foot waders, so I’m always wearing studded soles. If you can’t do that, having a pair of strap-on Korkers in your car or truck is the next best option, although Korkers does make boots with interchangeable soles for on-the-fly terrain changes.

In addition to studded boots, I always carry in my truck extra flashlights, another surf top, small bolt cutters (to take hooks out of your hand), a first aid kit, extra drinks and snacks, as well as a few back up lures in case I lose the hot plug of the night.

Everything discussed here is geared toward making you a more efficient surf fisherman in today’s fishery. Being prepared is a key factor to being successful in the surf and you can do that by doing what the fish are telling you or doing what you think they want. It can make or break a night or a season. I have found preparation and K.I.S.S to be key factors in my success, and you can share that same success by adhering to these basic guidelines.