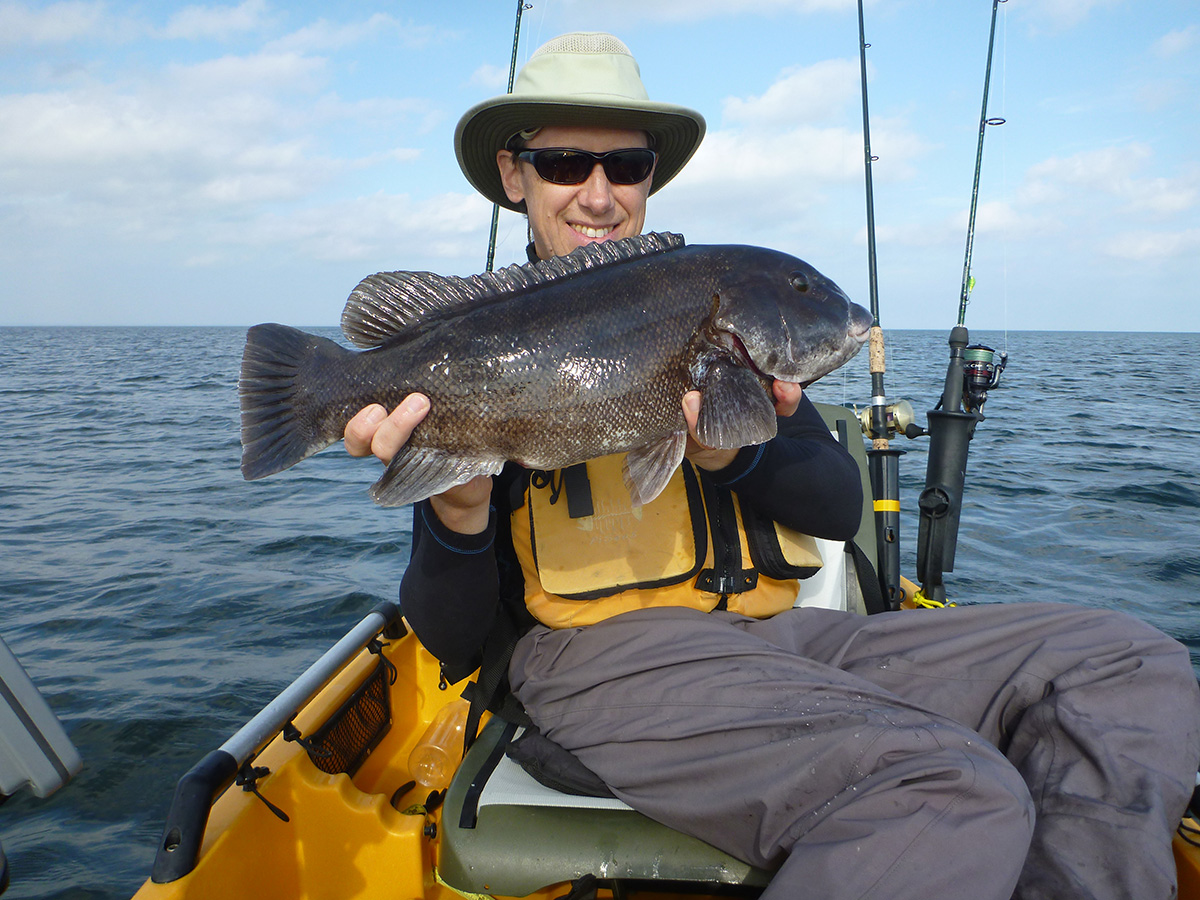 Seven tips for putting more tog in your fish box this fall.

Over the last two decades or so blackfish, or tautog, have increased in popularity both as a sport and food-fish more than any of our local species. I remember fishing off of jetties in western Long Island Sound back in the mid-80s with little competition from other anglers, and having no trouble pulling 6- to 8-pound fish with a fair degree of regularity. Tautog fishing is quite a different experience nowadays in many areas. Their hard-fighting and delicious qualities have made them one of the Northeast’s most popular inshore species for recreational anglers. At the same time, the once minor commercial market for these fish has boomed as their ability to stay alive in tanks for extended periods have made them a favorite for the lucrative live fish market. Unfortunately, these slow-growing members of the wrasse family are quite susceptible to over-harvesting.

The tautog’s migration pattern basically consists of moving between depth ranges over the course of the year, with little coast-wise movement. This means when they suffer from over-harvesting, it tends to occur at the local level, and, at least to my observations, to a greater extent in shallow near-shore waters than in the deeper, offshore areas. While they are not in imminent danger as a species, finding keeper-size fish has become increasingly difficult in many parts of the Sound, and also on South Shore reefs and inshore wrecks, particularly over the last several years. In addition to there being fewer keepers in some areas, those quality fish that do remain can become educated, and so are harder to catch. The last few seasons have been particularly tough in my corner of the Long Island Sound, spurring me to experiment and tweak my technique to try and maximize my chances for a keeper. Here I’ll share some tips that have helped put a good many quality fish in my boat.

Nothing attracts anglers like other anglers. Whenever I’m out togging, it doesn’t matter where, I almost always see a cluster of boats off in the distance pounding away on a piece of well-known structure. Such structures are well-known for the very reason that they in fact do attract fish, but always keep in mind that the keepers are removed from those spots early in the season. It can be hard to resist the temptation to fish with the pack. Anglers tend to think that when they see boats clustered together they’re into something good. The same sight just reminds me of sheep. I try to fish away from the crowd, in either my own spots, or at least areas that aren’t very heavily fished. I often fish from a kayak, and some of my better locations aren’t even big enough for two kayaks to fish at one time.

If you’re going to avoid the better-known, hard-hit areas, then what other choices do you have? The answer is, plenty! Within reach of every tog angler there are smaller, often overlooked pieces of minor structure, which have the ability to hold quality fish; one just has to do a little searching to find them. Small wrecks, isolated boulders, jetties and breakwaters all have potential and are worth checking out. In days past, such spots were often a challenge to find, and were known to only those anglers who spent their lives on the water. Thanks to modern electronics, such pieces are relatively easy to locate. Most small boat sonar/GPS units feature accurate chart software. The Navionics web and smartphone apps also display jetties, boulders, and small boat wrecks complete with accurate GPS coordinates. Google Earth is yet another great resource, especially for finding structures located in shallow water. When using Google Earth, be sure to utilize the historical imagery function to select a photo taken at either low tide or with clear water, so the features you are looking for are best revealed. Once on the water, your sonar/GPS unit comes into play.

Tautog often frequent structures in shallow water that are overlooked by the majority of anglers. Large tog even forage in areas above the low tide line to feed on such prey items as Asian crabs and mussels, so it would be a mistake to overlook such places. I’ve pulled fish up to 8-1/2 pounds from water less than 10 feet deep, and have scored fish over 5 pounds by casting onto exposed boulders and pulling my bait into the water. Just remember that most shallow-water locations are best fished near high tide, although I have seen some exceptions to this rule.

Larger tautog sometimes live on a structure that they use as a home base, but go on foraging trips elsewhere for food, whereas juvenile fish tend to hang around home 24/7. This habit is particularly common with tautog living on shallow water structures. I’ve fished shallow spots on some days for hours, just picking away at shorts, when suddenly I started catching keeper after keeper because the larger fish had just arrived back home from a hunting foray. Blackfish in a particular location tend to keep somewhat regular schedules of when they are home and when they’re out (much like people). By fishing different tide stages and keeping a log of your success, it’s possible to key into those magic times when the big fish are there.

All angling takes patience, to a greater or lesser degree, but to be an expert togger also requires restraint. When your bait or jig settles to the bottom on a lively piece of structure, it’s immediately set upon by a swarm of small blackfish, bergalls and other small reef fish. These fish are what cause the small pecks and nibbles that one feels from above the surface. In every tog angler’s mind, those pecks are caused by the first timid bites of a huge bulldog that’s making up its mind whether or not to commit to the bait. Don’t believe it! I used to envision the same scenario myself, until I started shooting underwater video of tautog biting and saw what really takes place. Trust me when I say it is better to leave your bait still, or move it gently, rather than striking hard. Large blackfish are motived to bite in part by competition and pecking order, so as annoying as those little bait-stealers are, they may actually be doing you a favor by attracting larger fish to your offering. Striking at those pecks repeatedly causes the small fish to momentarily spook and scatter, and can also cause you to lose your bait more quickly as you rip it away from the nibbling hoard. When large blackfish attack a bait, they engulf it, often aggressively. That’s what causes the sharp tug that signals the correct time to strike the hook home. Exercising patience and restraint to wait for that tell-tale tug definitely plays an important role to increase your chances of nabbing a keeper.

When togging in areas where short fish and bergalls are plentiful, the type of bait employed can make a big difference in what kind of life you attract. The use of any type of cut-up crab, be they green, white, or Asian, will result in the previously described swarm of bait-stealers, determined to reduce your succulent offering to a few mere shell fragments within seconds. When confronted with this frustrating scenario I turn to using whole Asian crabs, stuck right through the middle of the belly and exiting through the back. This presentation is just as attractive to larger togs than is a cut offering, but is both far less appealing, and more resistant to, the attacks of the small fry. Switching to this method can seem discouraging at first, as you will notice your bait is getting about 90 percent fewer bites than you were feeling previously, but be patient, as any bites you get will likely be from the very fish you are actually hoping to catch.

This is my favorite new technique. It’s one I developed from watching my underwater videos of jigging blackfish over rocky terrain in shallow water. After viewing hours of underwater action from the last two seasons there were two significant things I noticed. First, the larger tautog on a structure keep a keen eye on everything that happens on their turf. If something enticing, or just unusual, comes dropping in they become intensely curious and rush over to investigate. Second, when I allowed my bait to drop quickly to the bottom, as I always had done, a significant amount of the time my offering fell into a crevice or pocket in the uneven bottom and was only visible to whatever fish happened to be within a very short distance. Sometimes this distance could be only a few inches. This gave me an idea to try something new. I now sometimes drop my bait to the bottom, then immediately crank it back up about 3 to 4 feet to just let it hover there for perhaps half a minute before slowly lowering it down again. This allows the larger togs in the area to get a good look at your offering, and even tease them so that they just can’t wait to get at it before it drops again. Often when using this technique, the fish will slam the bait before I get a chance to lower it back down again, making for some truly exciting fishing.

After being something of a niche fishery for many years, pursued by a select few anglers, tautog are now one of the most sought-after fish in our region, resulting in the inevitable more-anglers-competing-for-fewer-fish scenario. Faced with this challenge, it requires some extra thought and effort for the dedicated togger to achieve the same degree of success that used to come easily. Give some of the tips and tweaks I’ve described here a try, and with a bit of newfound skill, and a bit of luck, you’ll put a few more fish in the box on your next trip.