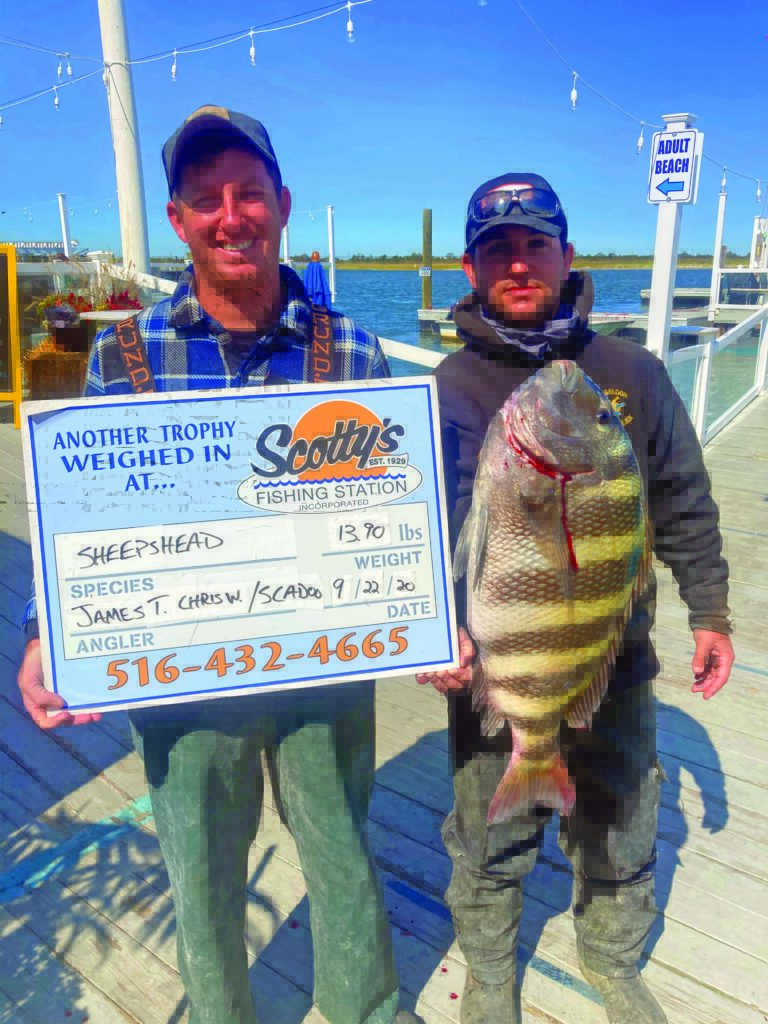 Catches of sheepshead have been on the increase in our waters in recent years, and a couple of anglers have even been targeting them with a fair amount of success, and at times, surprisingly good success. Sheepshead are just one of a number of species that have been finding their way north on a regular basis as ocean waters continue to warm. This season has seen cobia, king mackerel, sea trout, redfish, bull sharks, spinner sharks and a variety of jacks find their way into our backyard. The range of many species is gradually expanding northward and migratory patterns also appear to be changing.

Some of the cobia have been impressive in size, and just last week a new potential state record sheepshead was caught in west end bay waters. James Torberg and Chris Walsh were targeting triggerfish and sheepshead on Tuesday, September 22 when James connected with one of these members of the porgy family that tipped a certified scale to 13.90 pounds. If verified by DEC, James catch would displace two recent record candidates weighing 13.36 and 13.60 pounds. He caught the fish on a green Empire Blackfish Jig tipped with green crab.

In addition to being an avid angler, James is the founder of Hooks For Heroes, a 501(c)3 nonprofit that supports American Veterans & First Responders through fishing. More information on the organization and how you can help support their efforts can be found at www.hooksforheroes.org. James can be contacted at James@Hooksforheroes.org or 516-660-7179.

As many folks have long suspected, Sheepshead Bay did indeed derive its name from the incredibly abundant sheepshead that frequented the bay’s waters in the early 1800s and through much of that century. They began disappearing in the late 1800s and there is some evidence to suggest that their disappearance coincided with the demise of oyster beds in the bay. It is also possible that their range had expanded this far north due to competition from tremendous numbers of sheepshead in warmer southern waters. Regardless, they do appear to be making somewhat of a comeback in the area, with most catches centered around the Raritan Bay, New York Harbor and Jamaica Bay areas. At least two anglers I know who frequent Jamaica Bay and nearby waters have been able to catch sheepshead on a fairly regular basis the past few years.

The New York State Marine Fish Record Program is alive and well. You can check on current state records at https://www.dec.ny.gov/outdoor/7906.html. For a copy of the state entry application, go to https://www.dec.ny.gov/docs/fish_marine_pdf/bmrmarinerecords.pdf. For more information on the program, contact Sandra Dumais at 631-444-0445.