It’s a treat to trick some our favorite local targets, but be wary of scaring away the action.

Right about the time you begin reading this month’s edition of The Fisherman, neighborhood homes will begin to adorn decorations that include the likes of black cats, jack-o-lanterns and monsters of every type.

The buildup for the October finale of trick-or-treating is exciting – as is the timing for some of the very best striped bass action of the year!  In the spirit of Halloween’s allure, I thought we might take a look at which fish get spooked the most, and which ones the least, thus becoming ghastly ghosts to the anglers that seek them.

Striped bass are one of the most coveted targets in the Northeast.  They are pursued in the surf, rivers, bays, inlets and along the beaches by boat.  So how resistant are they to distractions that can send them scurrying?  Day-to-day, fishing episode to fishing episode, their tendencies can change.  What I mean is, some days striped bass can explode all over bunker in the ocean with boats amidst the chaos where they don’t seem to have a care in the world about all the engines surrounding them; much of the time, however, stripers will abandon a surface melee based on a single boat cutting through the action. It can vary, but all captains will tell you this, “Work the outskirts of blitzing fish.” Careful boating and a cautious approach will keep bass on the feed for the maximum amount of time possible.

Striped bass on the shallow flats are more susceptible to engine noise, clanging on the boat, and other cacophonies. The good news is that these bass are forgiving and if they get spooked, they often won’t swim far away and are still willing to feed. Sod bank bass are not resistant to thunderous boat wakes during peak weekend hours that ruin this type of fishing perpetuating the need to go at dawn, dusk or night. Yet stripers staging near the bottom and in the lee of bridge pillars and icebreakers will still bite with the weekend pleasure craft passing above. The key to their continued feed is the fact that they are 20 to 50 feet below the chaos depending on which bridge they are staging at.

In addition, stripers on the chunk traditionally eat without care of the boats above since the bunker, clam or even bloodworm is on the bottom. Likewise, drifted eels over choice rips can catch with boats overloaded in the area.  It is wise, nonetheless, for boats to go around the rip where the fish are holding if possible. Trolling for stripers is the most effective way to tally numbers and stripers that are down low, mid-column or barely subsurface. Bass will often take lures without care to the human action above when the bite is rocking. But just to throw a monkey wrench in the mix, there are enough days that the bass are finicky and all the engines cool the bite.

Fluke rely on their camouflage so much that they seldom spook. Divers often talk about swimming up to fluke and easily stabbing them with a knife, not to mention the ease of using a spear gun to capture the fish.  Skinny water captains can drift or troll using engines in water as shallow as 3 feet and still get ravenous bites from the flounder. Jet skis, screaming kids, engines, trolling motors, banging on the boat, shadows, no problem – fluke seem to bite regardless. When the water is particularly clear, anglers can watch fluke stalk their bait before biting.

I’ve caught fluke right next to dredge equipment and sewage recycling plants where the tertiary treatment of waste pumps back into the bay. These fish simply don’t scare off that easy. I don’t know if it counts as getting skittish, but one of the only ways fluke scurry away is when late season tropical swells roll in one behind another.  This not only shuts down the bite for a couple days, but it can accelerate the migration to the edge of the shelf.

I’m writing this story after having just taken out a group that took advantage of a school of tailor bluefish on small metals in the back bays. The school did get spooked and go deep due to my boat’s presence even with the engine cut off, but the fish always resurfaced again. Whether ocean or backwaters, bluefish taken on the chunk generally don’t pay mind to what’s going on over top of the them. Blitzing blues can get sent down by heavy boat traffic; fish on bunker are most likely to remain resilient to angling pressure.

I was recently talking to Jimmy “Da Peach” who mates on the Fisher Price IV charter boat on the Raritan and he said, “Bluefish really only spook out and only leave if Mr. Mako or one of his relatives shows up the party.” Sharks are eager to eat bluefish and I can also attest to dozens of blues hanging around my boat until a big dusky or sandbar shark arrived near my vessel.

Fight or flight? Weakfish would choose flight. Tiderunner weakfish of substantial size are coveted by select anglers that operate like CIA operatives – clandestine, mysterious and tight-lipped. Truly wired-in weakfish sharpies in modern times probably don’t even tell their spouses the patterns that help them catch.

The trout like clean, clear water and if the color is turquois or blueish as opposed to stained dirty or loaded with suspended sediment, the chances of success only increase. In the shallows and in the surf, noise is absolutely a detriment. Deeper water weakfish that swim near the bottom are less likely to get scared by boat traffic and action on the surface. Chumming grass shrimp for spike and keeper weakfish is also accomplished best without personal watercraft zooming around, hence many anglers choosing to do this off the beaten track or at sun up.

How can a blackfish swimming near rocks or a wreck get spooked from way above? Keven Twilley has spent many years mating for Captain Kane Bounds who owns Fish Bound Charters out of Ocean City, MD, the very same boat that put Ken Westerfield on his world record, 28-pound, 8-ounce tautog. Having pursued so many monster blackfish with his captain, Twilley said “Yeah, they definitely spook from the wreck anchor.”  As the boat bounces above the wreck, the anchor can shift and grind on the structure creating an unnatural noise. “Dual anchoring is the best way to do it if you’re serious about catching huge, wreck tautog consistently,” Twilley said.  This system, which takes practice and repetitions like a Major Leaguer in the batting cages, can place and hold a vessel over the precise spot the captain desires.

“If you break off a big tautog in wreck, I’ve seen it shut down the entire bite,” Twilley added when talking about ways fish get spooked by the anglers themselves. It’s essential to get good cranks of the reel immediately to hoist the fish away from the jagged structure where it can break off. Bridge and sod bank tog are a little tougher. Boats constantly wake the bridges and even though the blackfish suspend up and down the pillars, stanchions and icebreakers the fish readily feed and will not leave the area. Of course, where would they go? They are drawn to concrete and other structure so to swim off into open water isn’t what takes place. The same thing goes for the sod banks or jetties. Boat wakes will move the tog around and cause them to move around the vicinity, but they’ll always return to their lairs.

Jimmy Da Peach talked to me about ways to startle and shut off a blackfish bite. “If you are stuck in the rocks, yanking the snot out of the jig, they can spook. Or if the guy next to you is constantly lifting his sinker up and letting it bounce on the bottom, they can spook,” he professed. “But with braid, if you tap the butt of the rod jiggling the tip of the rod sometimes will get bit. If all six guys are tapping their rod though, it will have the same (negative) affect as bouncing sinkers. The tapping can either help you or hurt you.” Truly tricky insight from observations indeed.

So who’s the toughest fish on the block?  That’s a debate for another day; just know that they all have their own characteristics and may spook differently and other varied conditions. 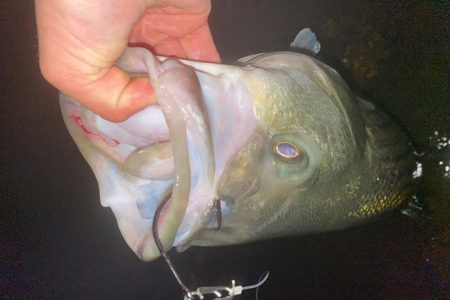