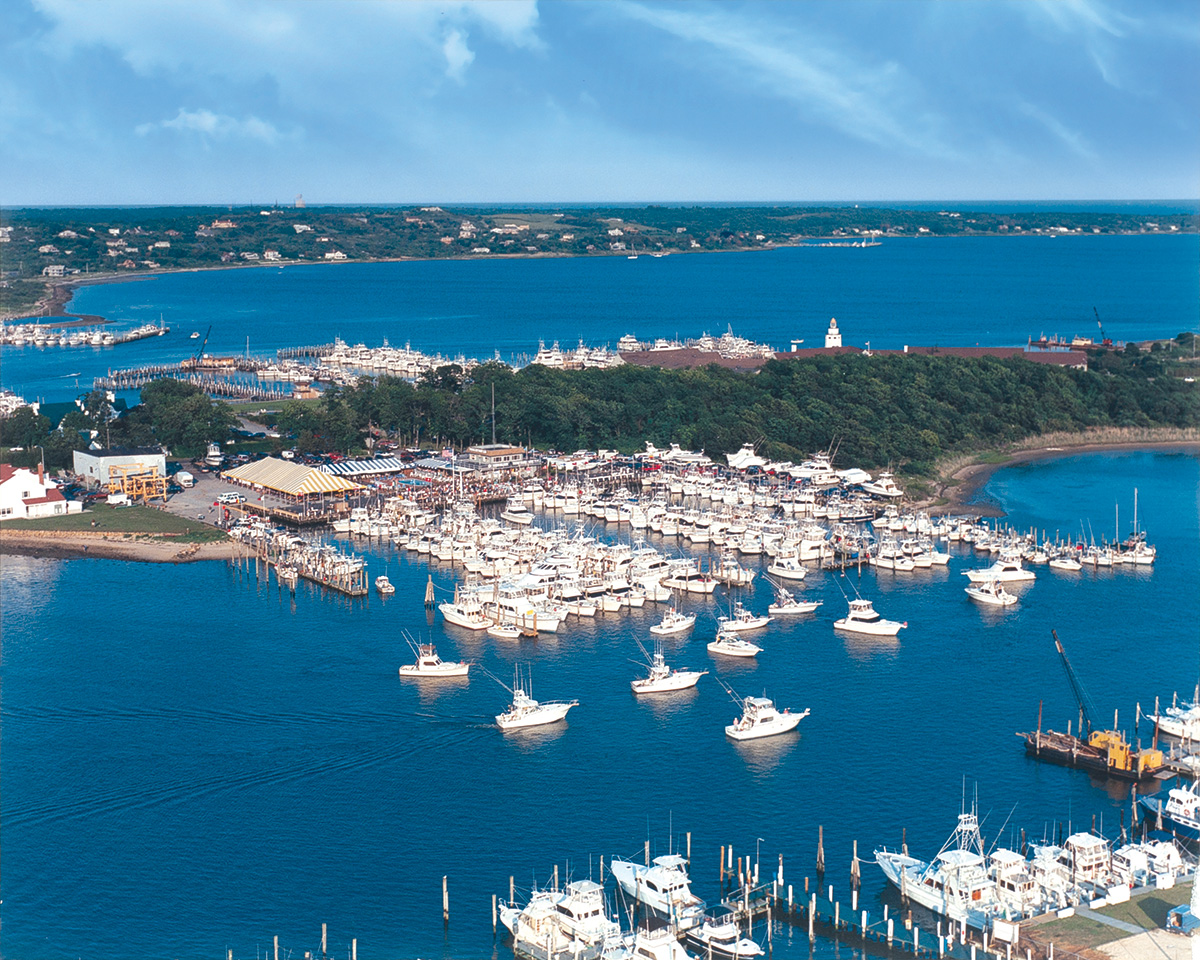 Ever since he was a young man, Sam Gershowitz was attracted to the allure of Montauk. Over the years, he spent his weekends there pursuing his two main passions: boating and sport fishing. Already a successful business owner, Gershowitz hoped to find a way to turn his love for the water into a destination for those who shared his passion.

While looking for the perfect spot, Gershowitz came upon a rundown marina. He introduced himself to the marina’s proprietors and asked whether they were interested in selling their business. “They asked me, ‘Who are you?’” Gershowitz recalled. “I explained that I owned a couple of scrap metal recycling facilities in Medford and Bay Shore. After a pleasant discussion, they became interested and it wasn’t long before we started discussing the price. That night, I couldn’t sleep. I wanted the marina so bad.”

It was in late December 1986 when Gershowitz and his wife, Marlena, were vacationing in the Bahamas that his dream was fully set in motion. “I got a phone call from one of the owners. He said, ‘If you want to do the deal, we have to close before the end of the year.’” By December 31, 1986, Gershowitz officially owned what is now known as Star Island Yacht Club & Marina.

Today, Star Island is the premier destination for sport fishermen and boaters alike. At Star Island you will find 170 slips, accommodating both seasonal and transient boaters. All slips are on floating docks, and provide each boater with cable TV, water, electric, wireless Internet access, and diesel fuel. Star Island guests can also enjoy the picnic/BBQ area or take a dip in Star Island’s heated swimming pool.

This year Star Island is proud to announce the installation of a brand-new 100-ton, open-end travel lift, which is the only one of its kind on Long Island. There is also a brand-new 50-ton lift and a full repair service and parts department.

For avid fishermen from up and down the East Coast, the annual sport fishing tournaments make Star Island the hotspot in Montauk.

Similar to NASCAR’s Daytona 500, Star Island’s annual Father’s Day weekend Shark Tournament is the contest to participate in after a long winter to test and hone your fishing skills against some of the finest fishermen on the East Coast. This year, Star Island will be celebrating the 31st Annual Star Island Shark Tournament, being held June 16-17, 2017. As the marina’s largest and longest-running event, this tournament continually draws large crowds of competitors and spectators. Last year’s event was no exception as nearly 800 anglers competed for their share of more than $550,000 in cash and prizes. The highlight of the tournament was the winning catch: a 730-pound mako, the heaviest in recent memory, caught by the crew aboard the Thor III.

The popularity of the Shark Tournament has even transcended beyond the local sport fishing community. In 2013, NBC Sports was on hand to film the tournament for a two-part episode of Shark Hunters, which followed anglers on their journey to haul in “the big one” and everything that transpired from departure to weigh-in.

But Star Island isn’t only known for its Father’s Day weekend Shark Tournament. From July 9 through July 15, the marina will host the Fourth Annual Fluke Tournament. Originally conceived as a day-long tournament, this year it has been expanded to a full week of anglers competing to catch the heaviest fluke and sea bass for cash prizes and custom trophies. 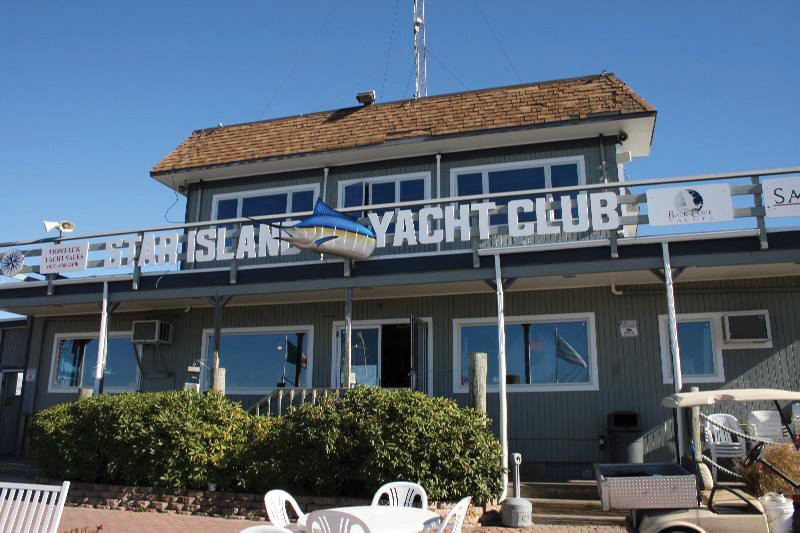 For those looking to catch the action, the Star Island Grill offers casual dining overlooking Montauk Harbor. This is the perfect spot for spectators to come and visit while family and friends compete in the events. The restaurant is open for breakfast, lunch and dinner. Star Island Grill serves up a variety of fresh fish, summer salads, monster burgers, ribs, chicken and signature sandwiches, as well as a children’s menu. The angler can also bring their own fresh-caught fish to the Star Island Grill, for the “You hook it, we cook it menu.” The bar has a line of exotic blended drinks, cocktails and beer. “Our menu reinforces the Star Island Grill as a unique tourist destination restaurant that attracts both boaters and non-boaters alike,” Gershowitz said.

Star Island’s Ship’s Store is known as the largest ship’s store and tackle shop on the East End of Long Island. Star Island has everything the boater needs, including footwear, clothing, marine hardware, engine supplies, groceries, coolers, and ice. For the avid fisherman, you will find rods, reels, bait and tackle. The expert staff will assist anglers with finding the best fishing hot spots on the water, and put together a rod, reel and line package that will suit their needs. As the leading live bait shop in Montauk, Star Island has everything a fisherman needs to reel in a striped bass, or doormat fluke, including live eels, spot and croakers. Frozen bait, including bunker, chum, butterfish, herring, sardines, chunking baits, ballyhoo, squid, spearing, sand eels, smelts and clams, is also available.

For the captain who prides himself on being hands-on, the store carries an array of marine cleaners and waxes, brushes and varnishes, electrical connectors and wires, hardware and plumbing fittings, lines and fenders, lubricants, and oil and fuel filters.
Star Island is also the summer home of the Marlena, Gershowitz’s 105-foot Jim Smith. Being that Gershowitz is an avid fisherman, you will find the Marlena on the fluke and striped bass grounds of Montauk, as well as the canyons. When not fishing, he and his wife Marlena, who recently celebrated their 50th anniversary, cruise the Bahamas and Caribbean.

Reflecting back upon his 55 years in business, Gershowitz said, “After being in the scrap business for over 50 years, and now in business for 31 years in Montauk, I am proud to say that through the efforts of the dedicated staff at Star Island, what was once a rundown marina is now one of the finest marinas on the East Coast. Today, Star Island is a destination hot spot for the avid sportfisherman, cruising boater and families visiting Montauk for the first time. Come to Montauk and you will see why we are the best of the best.”