A full version of the following editorial ran in the March, 2019 edition of the JCAA newsletter that you can find at www.jcaa.org.  A passionate angler since childhood, the author’s fisheries volunteerism began with his membership to the Berkeley Striper Club in 1972.

There will be some interesting decisions made on the management of striped bass in the near future.  The reason the regulations will be up for discussion is the most recent benchmark stock assessment.  Because of the recent government shutdown, the document we discussed at the winter meeting of Atlantic States Marine Fisheries Commission (ASMFC) was not the final version.

But the draft document stated that we were exceeding the reference points on where the spawning stocks should be.  This is after all the states took a 25% reduction a few years ago.  Basically, the stock assessment says that the current regulations are not rebuilding the striped bass stocks to the base year of 1995, that we are overfished, and overfishing is taking place.

To understand today’s discussion, you need to understand the regulations that were put in place in 1995.  I have been at the striped bass board meetings since 1986.  At that time the public was not allowed to ask questions and neither were ASMFC Commissioners who were not state directors.  In 1989 the discussions began about how to re-open the fishery since many of the states along the east coast had a total moratorium on fishing for striped bass but the stocks had begun rebuilding.

The 1989 year class was one of the best in striped bass history and pushed the three-year average high enough to allow for the resumption of the fishery.  During the discussions at the striped bass board meeting and with the advice of the technical committee, the board debated all day long about whether or not to open the fishery with two fish at 24 inches in the Chesapeake Bay and two fish at 34 inches along the coast recreationally and with the same size limit commercially with quotas.  Before the board broke at 9:30 p.m. the audience was asked for comment.  I was pushed to speak for the audience and asked the board for an opportunity to speak before the vote the following day.  The board agreed and we went to sleep.

The next day they opened the meeting at 8:30 a.m., made a motion to open the fishery at 18 inches in Chesapeake Bay and 28 inches along the coast.  That motion was passed in 45 minutes without public comment.  At 1 p.m. they asked for our comments and I was again the spokesperson.  I said, “You don’t give a damn what we have to say but you will in the future.”

Because of that board meeting the community was excited to be more involved and began attending more striped bass meetings.  There were no longer five or six of us in the audience but more often 30 or 40.  The ASMFC commissioners began hearing from the recreational anglers and the process began to open.  By the time the 1995 amendment was being drafted, the recreational sector along the coast had developed a stronger voice.  There were not only ASMFC commissioners from the states who were speaking at board meetings.

The 1995 amendment was an example of our participation.  It was designed to have a quality fishery and the base year was the year that we declared the fishery recovered, the highest point we had seen since we started the striped bass emergency act in the early ‘80s.  The referent points, unlike other fisheries, were made more precautionary.  I was one of the three New Jersey ASMFC Commissioners making those striped bass management decisions.

In 1995 the participation in the striped bass fishery was different than it is now along the coast.  But so was every other fishery.  It is important to understand what was happening in 1995.  We were still benefitting from the large number of big striped bass that were protected during the moratorium that was in place from the ‘80s through the early ‘90s.  Many of the states had not opened the fishery to two fish at 28 inches along the coast and put in seasons that were more conservative than required.  There was also a smaller group of anglers.  Most striped bass fishermen were like me, we didn’t talk about catching fluke, black sea bass or tautog.  Our 24/7 talk was about striped bass fishing.

The seasons then were open all year for black sea bass, fluke, scup and tautog.  Summer flounder had a 10-fish bag at 14-inch size limit and no closed season. Most of the people I fished with or knew didn’t like striped bass for dinner and fished for other species for food.  There were not as many striper fishermen in general, even fewer who were taking striped bass home to eat.  That was part of the big increase in the number of private, party and charter boats targeting striped bass.  The 1995 amendment was good based on the era for which it was written.  It allowed for a fantastic fishery on big fish throughout the ‘90s and into the early 2000s.

Because of the concerns of the Mid Atlantic Fisheries Management Council and ASMFC, there was a dramatic change in the way we manage fisheries jointly.  We kept raising size limits and shortening seasons and cutting bag limits.  Anglers who fished for their tables had fewer opportunities to bring fish home.  There were periods of time that striped bass and bluefish were the only fisheries without closed seasons.  Anglers discovered they were spending a great deal of time, effort and money with little to show for it if their target was fluke, black sea bass or tautog.  So it was the natural move for many private, party and charter boats moving into the striper fishery, especially since it was open year-round.

The abundance of striped bass allowed for novices to meet with success.  All you had to do was snag a bunker and you were a striped bass fisherman.  The pressure on the striped bass population resulted in fewer trophy fish being caught.  In the ‘90s the hook and release mortality rate was greater than the number of fish we were taking home to eat.  By the 2000s we began putting more pressure on the stocks.  Because people were taking more fish home to eat and the hook and release mortality increased because more fish were being hooked and released, the stocks actually began to change and there were fewer big fish available.  This is the natural progression for a recovered fishery.  The question is whether or not this is sustainable. 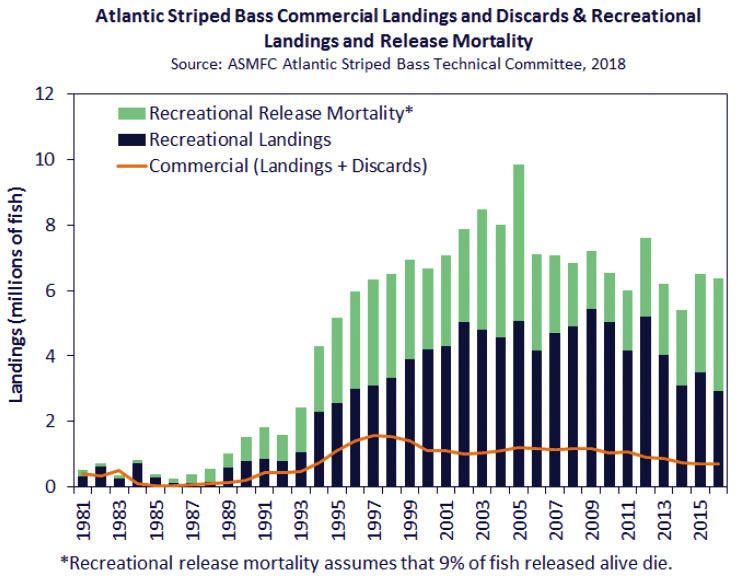 Hook and release mortality has always played a big role in the striped bass stocks.  In 2017 and 2018 the hook and release mortality exceeded the number of fish anglers were taking home to eat.  The catch and release fishermen generally turn a deaf ear when we talk about catch and release mortality, denying they contribute to the problem with the stocks.  In the late ‘90s I was having a striped bass management discussion with a friend of mine from New York – one of the leading striped bass conservationists – about the two fish bag limit allowed to charter boats in New York.  Since he had become a catch and release fisherman after many years of fishing, he thought they should only be allowed a one fish bag limit even though at that time there was no problem with the stock.  I suggested he consider the angler who took two fish home.  This angler may make five trips a year on a charter boat.  If the angler is lucky enough, he/she kills 10 fish to take home to eat.  The angler probably caught and released a few other fish on those five trips.  We agreed the angler releases 30 fish on those trips.

A study by Maryland showed the higher the air temperature, the greater the hook and release mortality.  So the year-round angler probably has a higher hook and release mortality due to the climate issues since he is fishing a lot more.  For example, if you are fishing in a river where the water is fresh or brackish, the water temperature is high, the air temperature is high and you are using light tackle so the fight is longer, the catch and release mortality is extremely high.  The studies again prove this is true.  Catch and release anglers need to consider these factors before they blame other anglers who take a few fish a year for the table for problems with the stocks.  We each need to put ourselves in other’s shoes before we condemn them and put our own homes in order.

Where Are We Now

We have a striped bass fishery that has expanded.  Unlike the ‘90s striped bass is important to the party and charter boats.  It has also grown increasingly important to all the private owners who cannot fish for fluke, tautog or black sea bass in closed seasons or with the increasing size limits.  The science tells us that the present spawning stock biomass is more than high enough to produce the highest young of the year in Chesapeake Bay.

In spite of the skepticism I received when I said the spawning stock biomass was high enough to produce the highest young of the year when we were discussing the last addendum, the facts proved correct.  The 2011 year class was the 4th highest in history of the young of the year.  The 2015 year class was the 8th highest in the young of the year index in the over 70-year history.  The hook and release mortality was going down but has increased in the last few years.  It is also a fact that we are never returning to the way the recreational fishery operated in 1995 or the 2000s.  This is the first benchmark stock assessment in which we are using the adjusted recreational catch numbers, which show an increase in both catch and participation from the methods we historically used.

There are also things that are affecting fish populations that have nothing to do with fishing pressure.  The water quality of the Chesapeake Bay and the warming of the waters inside the bay and elsewhere are just two of them.  Then there is added pressure on the harvest of the forage species that striped bass count on.  New Jersey beach replenishment has impacted many species. I can list many more but these are things that we cannot control through fisheries management.

The ASMFC will be focusing its attention on what we do in either a new addendum or amendment.  What we decide will have a huge impact on the recreational fishing industry, the anglers and the states.  These decisions should be made thoughtfully and deliberately.  They need to include all stakeholders and look at the long-term consequences of what we do.  All options should be on the table and be discussed with the general public.

In the mission statement of ASMFC it states that we are managing fisheries to be sustainable.  That means different things to different people.  Below are some of the options that are available to us.  I have not taken a position on any option at this time since I need more information and a discussion about the long-term impact of each of the options on the fishing community.  There are more that may come up for discussion.

It might be easier to get 10 striped bass together to agree on management issues than to get 10 striped bass fishermen to agree.  I am always an optimist and realize that compromise is essential to deal with the needs of many.  All of us are going to have to give a little to make this work.  No one will be totally satisfied.