A new tournament season begins on May 1 as The Fisherman subscribers compete through November 30 for over $107,000 in prizes!

So what does it take to lay claim to being the top saltwater angler in the entire Northeast? For Fisherman subscribers like Sam Dibner, Dave Wissemann and Vincent Deledda it meant outfishing thousands of other competitors from Maine to Delaware in an effort to catch the largest fish possible in multiple categories en route to a brand new boat and motor package.

Yes, The Fisherman’s annual Dream Boat Challenge has evolved; starting with our 50th Anniversary Season in 2016, we altered the rules of our subscriber-only fishing contest in order to reward the very best fishermen in the Northeast and Mid-Atlantic. Society as a whole may have shifted towards “everyone gets a trophy,” and as long as you can register a top 80 fish across eight different categories of fish (blackfish, bluefish, fluke, mahi, porgy, black sea bass, weakfish, and sea robin) and it’s still there on the leaderboard at the end of the contest, you will take a prize.

But in terms of strategizing your season and adjusting tactics to tackle only the biggest fish in the region, you’ll have to fish hard and fish often if you want to win the grand prize. In 2018 for example, New England subscriber Sam Dibner tallied 35 points total with final leader board positions for sea bass, mahi, porgy, bluefish and blackfish. The year before it was New Yorker Dave Wissemann with 39 points total finishing with weakfish, porgy, yellowfin, bluefish and blackfish in the top 10 among the eight categories. Back in 2017, New England subscriber Vincent Deledda ran away with the title with 37 points, finishing the tournament season with five species spots on the board.

Does it require a lot of effort to finish off as the Dream Boat Challenge grand champion? Most definitely. Will it mean traveling throughout the region to get on the best possible bite at the right time of the year? Probably so. But to win the $87K plus Steiger Craft boat package with Evinrude power and Lowrance electronics in 2019, you have to be dedicated to being this season’s top angler.

“Dream Boat has evolved into the top saltwater fishing tournament in America, most certainly here in the Northeast,” said The Fisherman’s publisher Mike Caruso. “There’s nothing like it because it truly awards the one angler who’s accomplished the most in fishing.”

Get in It to Win It

To qualify for the Dream Boat Fishing Challenge, all you have to do is subscribe to The Fisherman Magazine and get out and fish, (see official rules in this issue) something you’re likely going to be doing anyway. In 2018 we added another eligible inshore species, sea robin, and its popularity took off even greater than we could have imagined! With such a large portion of The Fisherman faithful fishing the inshore grounds, the opportunity to win this year’s Grand Prize package is there for the taking.

In order for an entry to count, the fish must be weighed and measured (length and girth) at a participating tackle shop which is an official Fisherman Magazine weigh-in station between 12:01 a.m. Eastern Time on May 1, 2019 and 11:59 p.m. ET on November 30, 2019. The fish weight and measurement must be filled-in on an official entry form, signed and dated, by the tackle shop authorized personnel. The entry form must also be accompanied by a photo of the angler and catch. 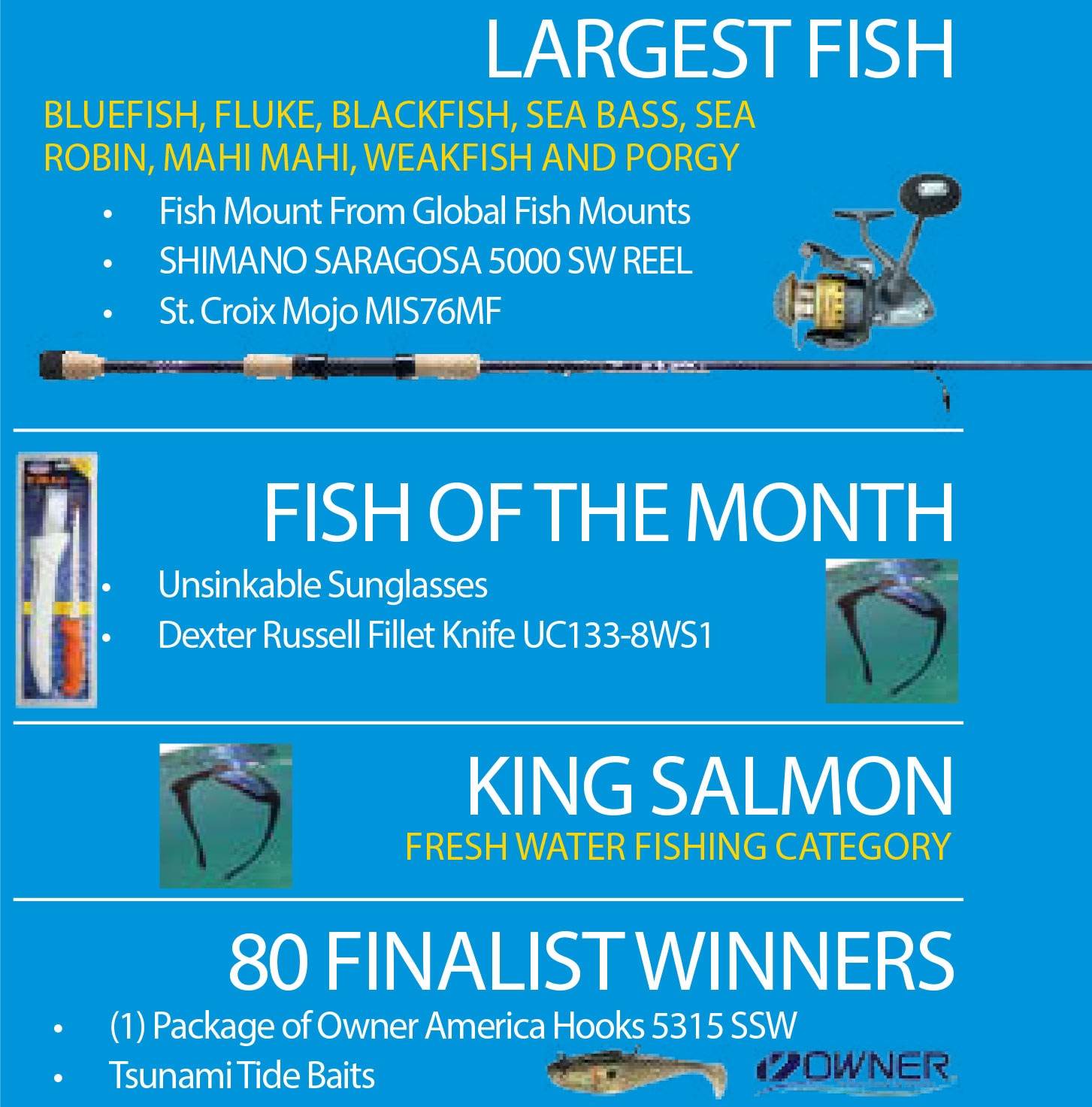 Continuing with the rule format established in 2016 as part of our 50th Anniversary celebration, we continue to reward the very best fishermen and women in the Northeast and Mid-Atlantic for their angling prowess with the Dream Boat Challenge. Rather than offering up awards for participation, we at The Fisherman honor the best angler who demonstrates their abilities across a wide cross-section of categories.

The 2019 Fisherman Magazine Dream Boat Challenge Grand Prize package is bigger and better than ever and includes a Steiger Craft 23 Miami boat with Evinrude E-TEC G2 250 HP outboard motor; a one-year supply of Chevron Techron Marine Fuel additive, a Lowrance HDS Live 12 with Active Imaging 3-in-1; one Engel EN80 Cooler; Navionics Platinum+ marine charts and a fish mount from Global Fish Mounts of one the fish entered for a total value of more than $87,000!

But wait, there’s more! The angler who accumulates the second-highest point total will win a 3-night stay for winner and one guest at the Zancudo Lodge in Costa Rica with a value of $6,400). The 3rd place prize for 2019 is a Sea Eagle SUPCAT 10f Water Snake Motor Package valued at $1,569. The eight Largest of Species winner will each receive one Saragossa 5000SW reel; one St. Croix Mojo Inshore rod (MIS76MF); a fish mount from Global Fish Mounts of the fish entered; and one pair of sunglasses from Unsinkable Polarized Sunglasses.

“For any angler on our final standing board it provides a unique credential of distinction,” said Caruso, adding “however, for the first place winner it provides the ultimate status in sportfishing.”

Here’s to all anglers in 2019, good Luck! We’re looking forward to another awesome year of Dream Boat Fishing!