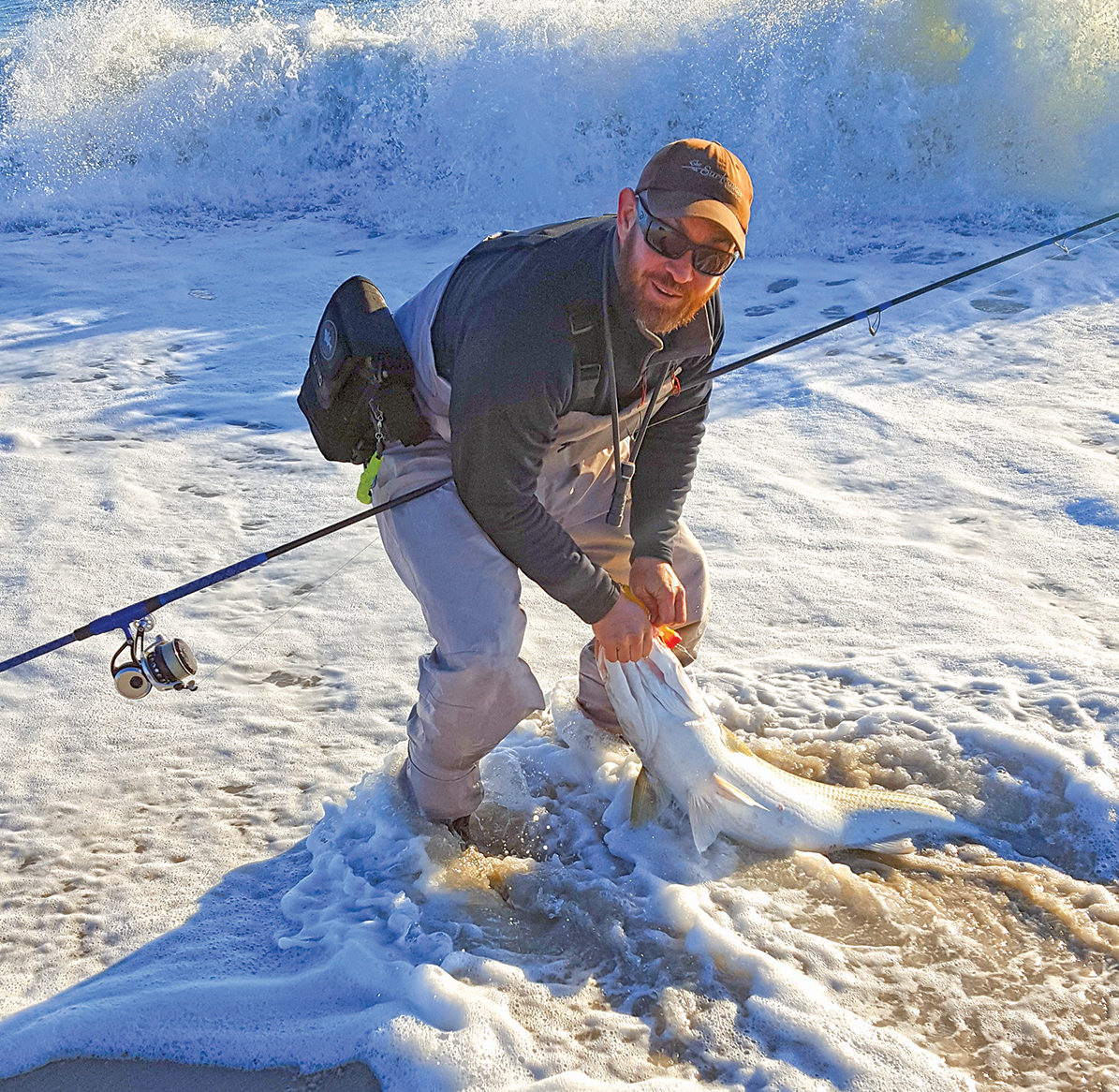 You’ve bided your time long enough; October is for honing your tricks for trophies.

My how the times have changed! September was once the “mullet month” where at the middle of August the mullet piled into the rivers, and as September rolled in, and the weather and backwaters began to cool, the huge exodus began, and the surfcaster had a good fall season kick off!

Blues and bass were the headliners of the show. But in the last few years September has stayed, may I say, ridiculously warm, and the mullet trend seems to have changed. So instead of poppers and blue-backed metal lip swimmers it’s been trending down to playing with the smaller summer residents, who are also getting ready to move as the length of days shorten.

While our fall runs over the last couple years have been crap shoots (Don’t get me started about beach replenishment.) the one pattern I have picked up on is the big bunker bass of late October, which has really been a prelude to our historically great fall runs of November.

I have noticed that the last two weeks of October have brought some adult bunker to our shores; along with them we have had some good sized stripers in hot pursuit, giving the hungry surfrat a legitimate shot at a honey.

It seems that every year around this time nice bass have been taken; not always monsters, but some nice fish, high 20s up into the high 30s with an occasional 40 or better.

It was a couple years ago on Halloween that the winds howled out of the north and straight down the beach. I could see a huge school of bunker just over the bar and it was hot, meaning the bass were blowing through the bait. From the beach you could see that the fish were big, but the hard wind and distance made it impossible to even get a lure close to them. “Boy if the bass ever pushed them to the beach all hell will break loose,” I said.

There were three of us watching and drooling, we had our heaviest and best casting pencil poppers ready to go. Then it happened, as if in a dream, the bass pushed the bunker towards the beach! I cast as hard as I could across the wind and began working my pencil; it was pure adrenaline when BAM I got hammered, the drag dumping on a good fish. I looked over at Murty and gave him the nod. Pat to my left connected two minutes later. I patiently worked my fish, no hurry, haste makes waste. Pat landed his and weighed it, 42 pounds, and then released it. My battle raged as I worked to tire this big bass.

As I finally had it in the trough, I knew this was in all likelihood a fish over 50 pounds based on the length of the battle and the fight on my set-up, which was my heavy combo; my normal rod is a lot lighter. The fight with that fish, up to that point was textbook and I was developing my plan on exactly how I wanted to wash it up in the rough surf, everything under control, no biggie just a timing thing.

Then it happened, out of nowhere another angler appeared and he cast out across my line. I asked him what he was doing (with a lot of extra words added for emphasis). I told him he crossed me and he needs to go up and around me; he argued that he was under me and thus walked under my line, again a couple more words were uttered and finally he came back on his line, promptly cutting mine off about a foot from my tip. Words cannot express my feelings. The perpetrator disappeared quickly, a very good move on his behalf!

There is no good ending to this story except I was asked to dance and I greatly appreciated that; nothing really to be learned, except perhaps to explain on how to get to situations that are similar.

One of my key words when working with those new to surfcasting is the word observe. Another phrase is study your water. In that two-day stretch my small group landed numerous fish in the 20- to 30-pound class, never a bad thing. We did this by studying the water; carefully watching and paying attention to what was in front of us. If you really watch your water as you scout and as you fish you will be amazed by what you see. In this case there were many schools of bunker along the beach but they were out over the bar.

I don’t think I’m sticking my neck out too far to say that all the peeps on the beach that day saw nothing, just cruised by in their trucks, blind to the potential of what was taking place. Finding the bunker was not a problem as there was plenty along the beach. Finding a hot school, and one within range, was our objective. It doesn’t happen often but it does happen. The harder you work and the more you pay attention, the better your chances are for something good to happen.

I would be leaving out a big contributor to our success if I didn’t mention that we were hunting bear and we were loaded for bear. We had our setups, 11-foot rods, longcast reels, great casting pencil or polaris poppers. With the hard cross wind you really had to put your back into the cast and cut through the wind. The longcast spool allows line to just fall off the reel and give you much needed added distance. I have also been using 30-pound Spider Wire, which also adds distance.

It is not a normal occurrence when big bass get a school of adult bunker pinned against the outer bar on lower ends of the tide; even more uncommon is it pushed up against the sand and at your feet. But it does indeed happen! Bass on the bar is much more common, and there will be times when you are going to need to put a bomb cast out there 100 yards or more in order to put your offering where it can be picked up by the bass’ radars. The commotion of the popper moving away from the chaos of the bait school is exactly what stripers look for.

As you gear up, remember to bring something big and heavy. Big as in “an attention getter” that throws a lot of water and an obvious target; heavy as in great casting popper that will cut wind and master distance, something in the 3- to 4-ounce range. It is here where you need the best of the best when it comes to pencils, perfectly engineered. I hunt these Grade A lures down with vigor.

On the rare occasion that God shows his love towards you, and you find yourself on the beach with 30- to 40-pound bass at your feet, the poppers need to stay in the bag and big metal lips need to come out a play. Why? If bass are in 2 to 3 feet of water or less you need something that will stay right on the surface or just below it. A big sexy wood wobbling along the surface will be inhaled on short notice! I am talking 8 to 10 inches here that you’ll want to have with you at all times when the adult bunker feed before your eyes.

So you have observation skills, you have good and proper equipment, finally you need work ethic. This particular skill cannot be generated from a Facebook post; you must be on the beach watching and working. When those big bass make that dip into the beach, and usually it is only for a few minutes, you have to be there and you have to watch for it to happen.

It usually takes hours of tracking schools of fish in order to finally get “lucky.” When you hear of bunker and big bass in your zone, commit some time to the hunt and something “big” can happen for you! See you on the beach!