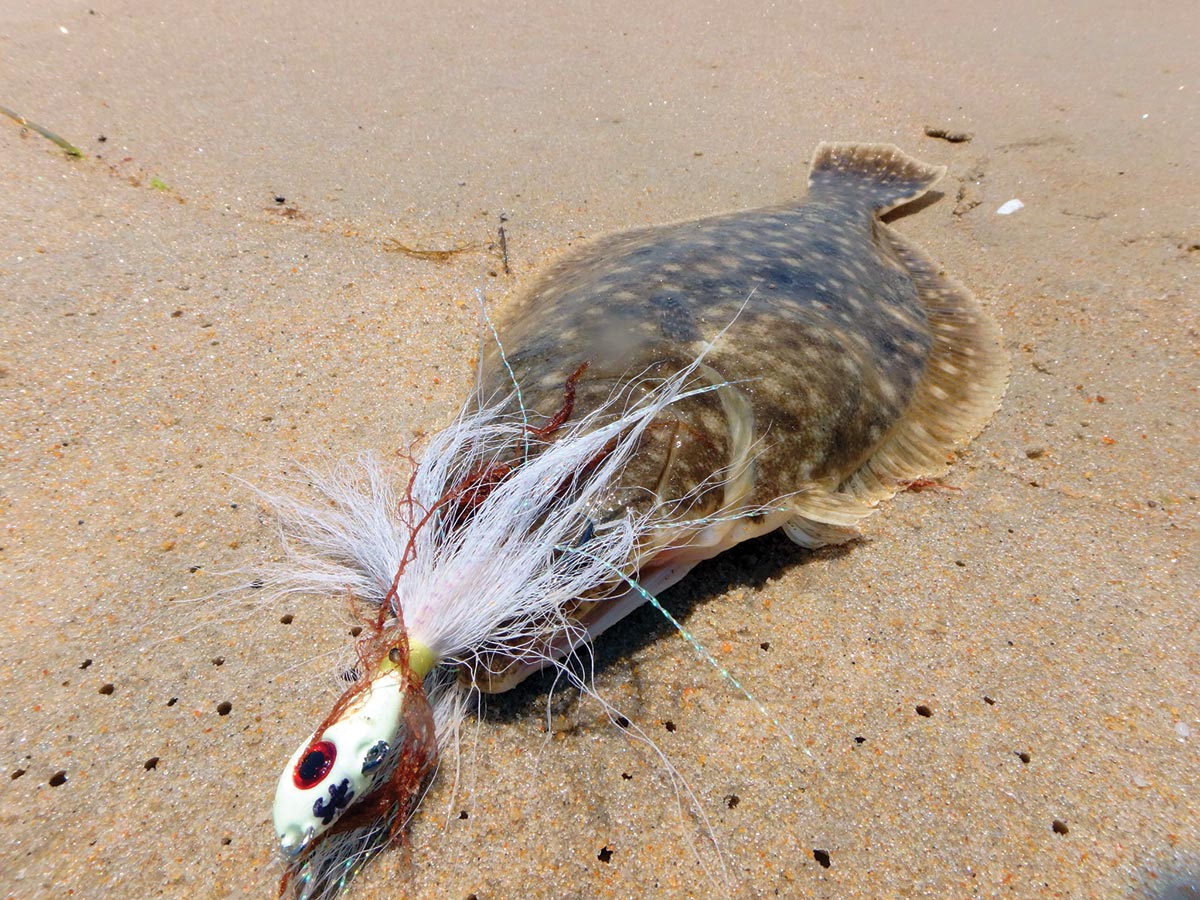 Roaming oceanfront beaches in search of summer flounder requires a certain amount of prospecting to be successful.

Sauté them gently or coat them in batter and deep fry them.  Broil them, grill them, stuff ‘em, bake ‘em.  It doesn’t matter how you do it, there’s nothing quite as delicious as fluke.  And yes, you can go to your favorite fish monger to buy them, but somehow that feels like cheating.  Besides, tasty as those options may be, nothing quite compares to the flavor of fluke caught and cooked the same day.

If you are just in it for the meat—stop. Read no further. Simply jump on a head boat for the day, and hopefully come home with fillets cleaned and prepped by the mate.  On the other hand, if you’re someone who enjoys the challenge of trying something different, of learning a new skill, of experimenting, then read on. 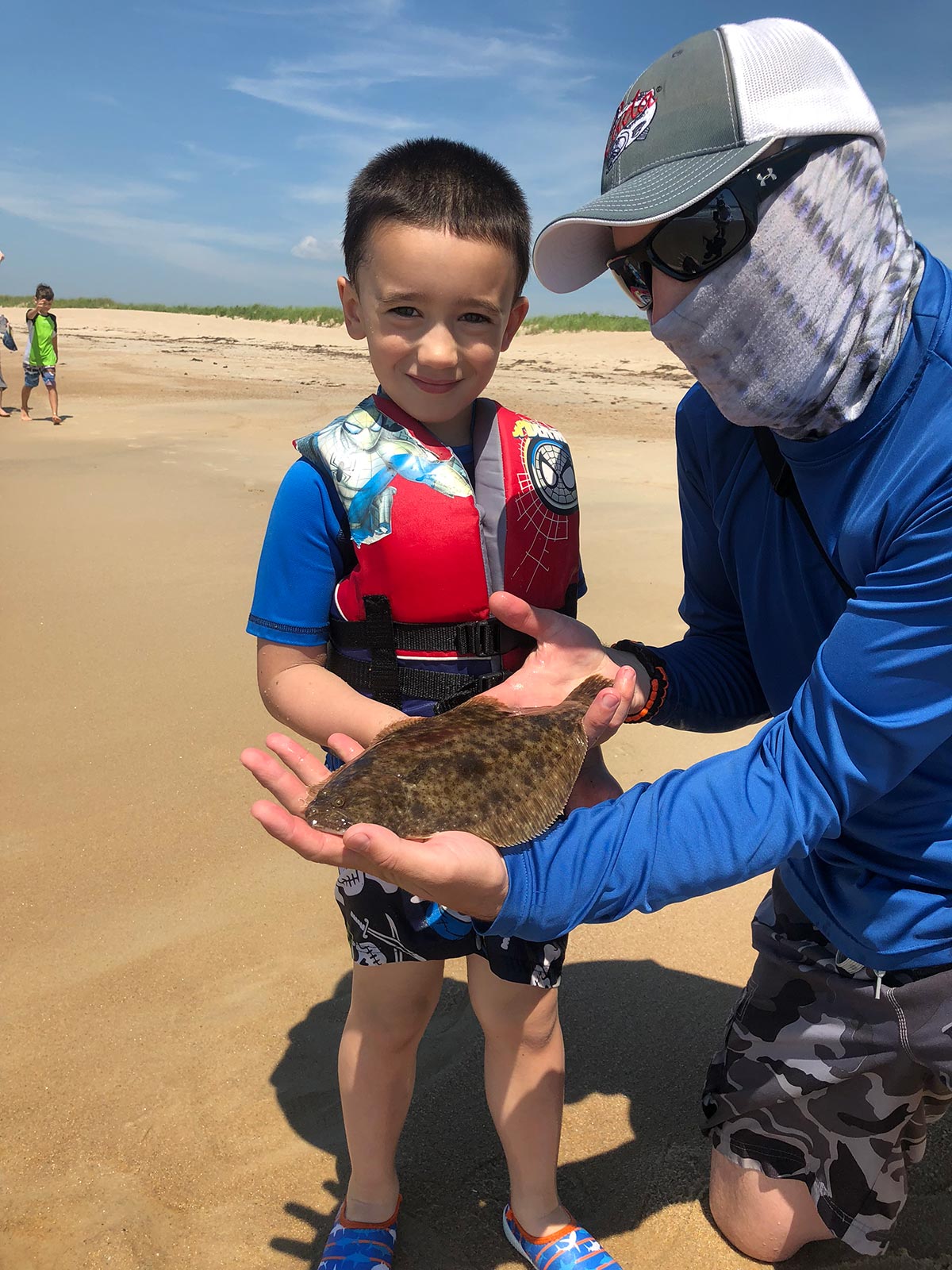 One of the most frequently overlooked methods of catching fluke is prospecting for them in the surf using light tackle.  Prospecting?  Yes.  Here you don’t have the luxury of a depthfinder to locate drop-offs on the edge of a channel or the advantage of a seasoned charter skipper shooting out to his favorite haunts.  Here you are on your own.

The swash—that area between where the wave breaks and its uppermost reach on the beach constantly varies over the course of the day with the rise and fall of the tide.  Often located at the outer limits of this is that little underwater step we’ve all encountered at some point when entering the water to go swimming.  The trick is finding the location on the beach where the step is most pronounced. Just beyond this is where a fluke may lie, a true ambush hunter waiting for a meal to be swept within its reach.

First, since you are apt to be doing a considerable amount of walking in pursuit of this, and you want to enjoy the fight these scrappy fish can put up, light tackle is the key. Dig out something similar to an older Lamiglas TS86MS with moderate/fast action, rated for 5/8 to 2-ounce lures and marry it to a 4500 series reel. You can also go to something like a 7-foot Penn Fierce II extra fast action rated for 1/4 to 1 ounce matched to 4000 series reel. When the surf is flat, you can even drop down to a 6- or 6-1/2-foot freshwater bass rod fitted to a 3000 series reel and 10-pound test. If neither of these two combos is in your arsenal, use whatever you’re comfortable with within that range.  Keep in mind, you don’t need expensive equipment. Stay with braided lines ranging from 10- to 20-pound test. I would not exceed 20-pound.

The combination of the rod tip’s action and the braid will allow you to feel the pickup and set the hook as the bite is almost identical to the sensation you get when the jig hits that little underwater step.  Keep in mind this is not long distance casting as the fish you are hunting are lying close in to the beach.  And while your casts should travel 30 or 40 yards, this range is only necessary to give your retrieve a chance to settle into a productive rhythm.

At the terminal end, your leader should end up being roughly 24 to 30 inches in length, after a dropper loop has been inserted about 15 inches up from the bottom.  One end of the leader has a power swivel while the south end has a snap to accommodate the bucktail.  You can also tie the bucktail directly to the leader using either a palomar or clinch knot. This reduction of hardware should allow for a slightly better action with the lure, while the use of the snap allows for an easier degree of change should you want to adjust to a heavier or lighter jig.  Again, you’re prospecting, constantly tweaking and re-tweaking as conditions demand.

Finally, don’t bring a surf bag brimming with lures.  Instead, a few bucktails: Smiling Bill or Spro style in 1 and 1-1/2 ounce sizes; plus two more at 1/2 and 3/4 ounce; a Ziploc bag with some 4-inch Gulp swimming mullets (pearl white or glow work well); two teaser hooks; two bare hooks; and a spare leader or two.  To the dropper loop, add a teaser and Gulp.  If that combo doesn’t produce, switch out the teaser for the hook with Gulp attached.

With tackle at a minimum, one of the easiest ways to carry it all is in a small pouch.  If you have a friend with Type 2 Diabetes who checks blood sugar daily, there is a good possibility their supplies come packed in a small canvas pouch each time a new batch arrives.  Ask them to give you an old pouch, it works perfectly.  If not, look around in the garage for any small plastic case.  The trick is to use something that slips comfortably into a pocket.  As for the Gulp, a resealable snack bag is ideal for putting a few pieces in the other pocket.

You will often be fishing in a highly abrasive zone consisting of pulverized shells and coarse sand.  Using bucktails whose heads are entirely white or at the minimum with a white lower body is cost effective.  Back home, after washing and drying your tackle, any paint that has been chipped off can be quickly replaced with some white nail polish followed by clear coat.

As any fisherman knows, there is no specific magic formula.  If there was, the word “skunked” would not be part of our vocabulary.  Fish are finicky, and that’s why it’s important to note all dimensions and weights are approximates as surf and weather conditions for the day (as well as rod choice) often dictate what you use.  The trick to prospecting is to go with the lightest presentation possible.  (To help with fine tuning which rods and jigs to carry, a quick check on Google can lead to websites monitoring beach cams and ones with marine weather for wave heights and wind.)

On the subject of websites, if you view any of the instructive videos on surf fluking on YouTube you will notice proponents of a very rapid jigging of a rod being held almost straight out in front.  And yes, this definitely works when the seas are flat.  However, when there is a little bit of white water having the rod tip horizontal and turned about 45 degrees away from directly in front while employing a much gentler jigging action allows for the lure to be under the minimum control necessary during the retrieve.  Once an intermittent pulsating rhythm has been established and you are about halfway through the retrieve is the time to gradually return the rod to directly in front, still employing a gentle jigging action.  I feel this imparts a more realistic approximation of what a wounded baitfish looks like while being tossed around in the surf as it is now approaching the zone where a fish might reside.  This is also where the use of braid comes in handy by allowing that little extra edge in sensitivity.

Now, as to exactly where and when fluke have set up housekeeping, that’s a different matter altogether and why this method is referred to as prospecting.  While it can be employed at any time of the day, obviously the fewer people in the water, the greater the chance of success.  So unless you have access to a lesser used stretch of oceanfront, prime time to fish is either early in the morning before the beach crowd arrives or late afternoon after most people have gone home.

As to where the beach step is going to be most productive, begin with a few casts fanning them out to the left, straight out in front, and to the right. If those casts fail to draw any strikes, walk about 15 steps and repeat the procedure, then 15 more and repeat. And so on until a fluke has been located.  Once that occurs work the area hard knowing that if there is one, there are likely to be more.  Most of the fluke will likely be 16 or 17 inches, but rest assured there will be some bigger fish to be found.  Add to that the consideration that a decent sized surf break will require more finesse to land a large fluke.  Remember, this is not meat fishing; it is the thrill of accepting a challenge and succeeding at it.

Then, there is the bycatch.  Since sea robins often inhabit the same locales, it really isn’t as bad as it sounds.  First they put up a really good fight on light tackle.  And second, if they are plentiful and large enough, the tail filleted and cut into chunks is delicious when fried after being dipped in egg and a seasoned flour and corn meal mixture.  (Side note: If you know someone travelling down South have them pick up one of the House Autry breading mixes for you. They’re worth it.)

From the miners who rushed to California in 1849 to current oil companies drilling beneath the ocean floor, not every venture is successful the first time out. That’s why it’s called prospecting.  But it is oh, so, satisfying when you land that first fluke—and the second—and every one after that.