Unbeknownst to many anglers is the fact that the vanguard of fluke (summer flounder) migrates into our tidal rivers and back bays in late March through mid-April.  Further, peanut bunker (juvenile menhaden) will stream into these same waterways in mid-July.  Since fluke are predators by nature, peanut bunker are one of their prime menu items.

As the initial schools of peanut bunker enter local estuaries, you’ll just see a few rings on the water’s surface.  These rings will turn into splashes, and once enough peanuts arrive, you should see flocks of diving seagulls feeding actively on larger schools, possibly larger gamefish underneath pushing them out of the water.  This is when you need to collect a population of live peanuts.

Last year, I watched several boats encircle a splashing school of peanuts.  Regretfully, these boats tossed weighted snagging hooks or metal lures with a treble hook attached. Since peanuts are much smaller than their adult ocean based counterparts, the boats I mentioned rarely caught any live peanuts.

After these boats left the area, I climbed up onto the bow of my boat and tossed a 5-foot diameter cast net into the quieted school of peanuts.  One cast was sufficient to net several dozen live peanuts, which was plenty for our day of fluke fishing. Rather than using the normal style of cast net, I tossed a Fitec EZ Throw net.  What makes this net unique is the “Accu-Throw Ring” which is at the head of the net.  This ring, along with centrifugal force will force open the various panels of the net and allow the net to hit the water’s surface in a perfect 5-foot diameter circle.  This type of net is easy to learn, and there is even an online tutorial to help you master the tossing technique.

Since my fluke boat is equipped with an onboard aerated livewell, it’s a simple matter of dumping the contents of the cast net into the well. However, to keep the peanuts alive and frisky, I add a half-tablespoon of Sure Life Better Bait crystals to the livewell. These crystals add electrolytes to the well’s water supply, and keep the peanuts robust and healthy.

On the other hand, for peanut bunker dunking on my kayak, without a built-in livewell I had to find some type of portable bait saver.  After checking various sources, I finally decided on a Cool Bubbles bait saver for my kayak. This unit has a capacity of 7.3 gallons of water, a foam inner liner to keep the water cool, a cutting board on top, and is powered by two “D” cell batteries, which pump aerated water for up to 44 hours, which hopefully I’ll never need. I also add one quarter teaspoon of Better Bait to my bait saver bucket.

Keeping the peanuts alive in a well or bait saver is one thing, but keeping them alive while drifting for fluke is another.  I needed to find a way to keep the peanuts breathing as long as possible.  Initially, I tried hooking them through their nostril, which worked to a point but not great.  Then, I tried hooking them through both lips, which actually caused the peanuts to drown, as they couldn’t open their mouths to allow water to flow over their gills.

In one of The Fisherman’s issues, I noticed an ad for a bridle rig, which was developed by 3D Fishing Products.  The two major benefits of this rig is that the front snap goes through the eye socket of the live bait, while the hook remains free standing away from the bait.  This bridal rigs comes in three sizes (small, large, and offshore), and I’ve found that the small size is ideal when drifting live peanuts. The placement of the bridle rig through the bait’s eye sockets allows the bait to open and close its mouth when drifted behind a boat thus keeping it alive for an extended period of time. I’ve also determined that a 4/0 Octopus style hook is ideal when coupled with a small size bridle snap.

There are at least three ways to fish a live peanut bunker.  Some anglers who fish an expansive sand flat might hang a live peanut bunker 2 feet below a floating bobber. The free-swimming peanut will have plenty of room beneath the float to entice any resident fluke.  Other fluke hunters like to drift a live peanut some 4 feet behind a fish-finder rig using a 1-foot dropper and a bank sinker to suspend the peanut off the bottom.

While both methods work fairly well, I prefer using a Wonder Rig type of fluke rig.  This rig consists of a t-shaped three-way swivel, a 3/4-ounce bucktail, and a bridled peanut.

One end of the swivel is tied to the running line, while a 1-foot dropper is used to tie to the bucktail to the swivel. A 3-foot length of leader is snelled to a 4/0 and then to the bridle rig.  The bucktail gives this method the weight to reach the bottom, while the bridle keeps the peanut bait alive far longer than other methods.

So if you’re looking for free bait, which is relatively easy to catch and store, yet is seldom used by other boats in the area, you may want to give peanut dunking a try.  It really works. 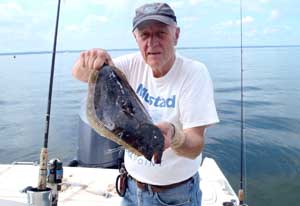 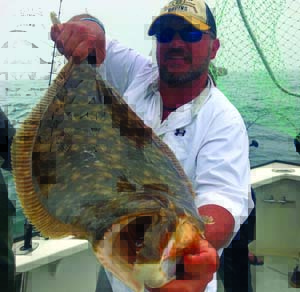