The quality of surf fishing varies through time; species by species, rules by rules, and methods by methods. In recent decades, there are probably two realities for people. Those surf anglers who have been at it for many decades, and those who have begun a love of the sport since the early 2000s. Those who took up the sport after 2005 have no experience with the great striper fishing of the 1990s, or superb monster bluefish from 1970 to 2000, nor the unbelievable run of weakfish in the 1970s. As a result, what many long-time regulars call poor surf fishing is normal surf fishing for newcomers. Sadly, in today’s reality only striped bass stocks are reasonably good, but without solid numbers of big fish.

There are unintended consequences to this split reality. For example, if today is normal, why fight for tomorrow? For long-timers it’s about restoring stocks of the big three back to normal. There are economic consequences, too. There are fewer tackle shops and an overall decline in interest about surf fishing because it’s true that 10 percent of the anglers catch 90 percent of the fish. For the 90 percent who catch 10 percent, lots of fish are needed for success. Somehow, we need to marry the long-timers with the newcomers in order to protect both the present and the future of our sport, and our fisheries.

In order to unify, we all need a better historical perspective. Since WW II surf fishing has been about much more than catching fish. For many, it’s almost a way of life. Surf anglers in the 1950s were a small group of hard-core people who, because of the intimacy of small groups, became a brotherhood. Small groups expanded through the ‘70s and ‘80s, then exploded in the ‘90s because of great striper fishing. Part of the original expansion was the rising cost of boats, but then modern four-wheel-drive vehicles became better with more perks and their prices soared, too. Modern tackle is more durable and requires less mechanical acuity, and pushed expansion in the 1990s and into the 2000s. Today, although beaches are almost empty most of the time, any run of fish features crowded beaches and fast communication about what, when, and where it’s all happening. But, what about tomorrow?All anglers, but especially surf anglers who lack mobility and electronics, need to work for the future of our fisheries and our sport. There are tremendous political, economic, and bureaucratic pressures on managers to allot as many fish as possible to as many user groups as possible. That means we should do more than attend hearings, send e-mails, or form conservation groups because the need is much greater than that. We should, each of us, take a look at our own practices. Do we give fish away? Do we harvest more than we can reasonably use? Are we careful how we catch fish and how we release them? Sadly, I still hear and see evidence that some anglers believe it is a God-given right to do whatever they want with the fish they catch, and ignore their role in shaping the future. I see anglers who step on fish, throw small fish like footballs, and even feed them to foxes and seals.

Many bad behaviors common in past decades amounted to little in the bigger scheme of things, but today they are unseemly when one considers a future for the sport. The more of us there are, the more fish we catch, the more precious each fish becomes. This concept is not only for surf guys, but boaters, too. Every fish we release carefully, every fish we don’t give to a neighbor or friend, every fish we don’t keep just because we can, and every fish we cherish as part of a larger common practice, improves the chances that our children and grandchildren will be able to enjoy the sport and that all of us will live in a more balanced ecological world. 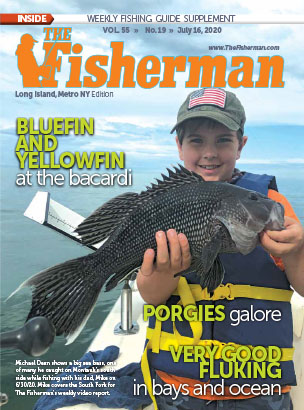