When your record your fish ethically, everybody wins!

Some of you may remember that I ran one of the first internet-based CPR surfcasting tournaments, commonly called the GoTight tournament, I amassed as many as 50 teams that were competing for some pretty awesome prizes in that season-long marathon, that went on for three years between 2013 and 2015. There were many reasons why I didn’t continue it for 2016 and beyond, but the biggest one was that it challenged my ethics as a catch and release angler. I want to make it clear that I keep an occasional fish for the table—usually fish that I don’t believe will survive release. So, you can think of me as a 99.9% catch and release angler, but I don’t begrudge anyone their right to keep a fish now and then.

As the commissioner of this tournament, I saw every, single fish entered into the tourney, and that amounted to a few thousand fish in that three-year period. I also observed many CPR attempts for the tourney, mostly at the Canal, and I saw so many people do it without any regard for the fish, that I finally decided to put an end to it.

In the time since, many other CPR tournaments have come and gone and most of them are based on the rules that I wrote and amended over that three year span. Because pounds are so difficult to ‘prove’ with a photo, or even a video, overall length in inches has become the accepted points-scale for tallying scores. The process is pretty simple, catch a fish, lay it out next to a measurement device of some kind with something issued by the tournament organizer to prove that the fish was caught inside the time constraints of the event, take a photo, take a selfie and release the fish.

Simple. Yes. But, when you consider the methods used to catch fish in the surf, especially nowadays, it goes more like this: catch your fish, drag it back to shore or to the flattest rock you can find in that moment, lay the fish down and find your ruler and tournament tag/badge/token, lay it all out next to the fish, get your camera out, take a photo and realize that your flash isn’t on, figure that out with wet fingers, in the meantime the fish flops and you have to reset the whole scene, take another photo, take your selfie and then walk the fish out into water deep enough for release. Now consider that your fish has just fought the battle of its life and is laying there, high and dry, getting no oxygen for the entire time it’s taking for you to get your collective… stuff… together.

Yeah, that’s not good. However there is a way to do this ethically and while giving the fish the best shot at surviving.

It has to begin before you make a cast. I used to compete in my tournament strictly for fun, I never took a prize. But when I set out to fish for a night in the surf, the first thing I did was lay out a measuring station. My folding ruler was laid out on a flat rock or patch of gravel, my tournament tag was there too, pinned under a rock. I would then turn on my camera and take a test shot of the scene, this would ensure that I was able to keep it in frame and that the flash was on, etc. To this day, I still keep my waterproof camera on a paracord necklace and drop it down the front of my wetsuit, then I just pull the string and my camera pops out.

When I landed a fish that I wanted to enter, I would hop off my rock and slowly make my way back to shore, keeping the whole fish submerged until I was almost to shore—a breather session—then I could just lay the fish in the prefab measuring station, fire off one shot, then take my selfie. The fish was rarely out of the water longer than 30 seconds.

If I was at the Canal, I set up the same thing, just in an open patch in the rocks, I never carried them up to the road because I wanted to be quick. On the, very rare, occasion I was fishing a sand beach, I would set my station up on wet sand only, I saw wayyyyy too many shake-n-bake entries and I don’t believe a sand-coated striper can survive.

I think the bottom line is that you have to prioritize the fish and not the points. If you set yourself up beforehand, you can ensure that you measurements will be true and that you can record your fish expediently, getting them back into the drink in a flash. 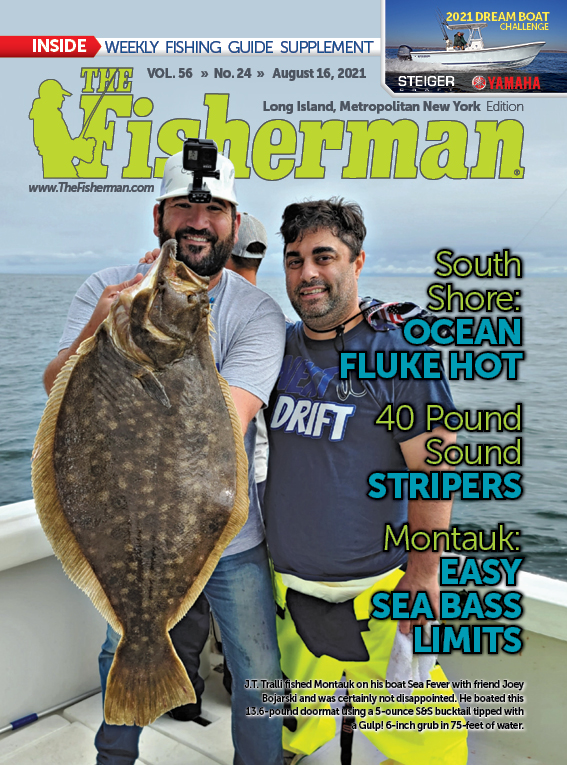 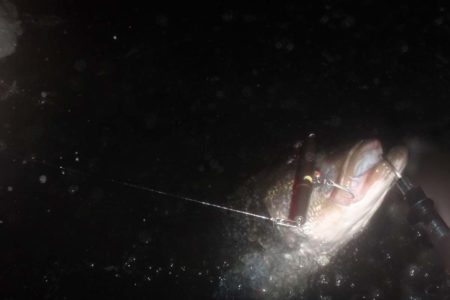