I’m convinced the difference was simple little things like using a much lighter leader, or tying direct to a bucktail, lead head or popper.

I’ve always believed that those who have cut their teeth on freshwater fishing have a better understanding of the nuances involved with presenting a lure or bait to saltwater gamefish.

The virtues of fishing lighter leaders and minimizing the use of hardware is mandatory in many freshwater situations, but no less important on the saltwater scene. Much of how we fish and what we believe is important when it comes to catching fish is based on our own personal experiences. Those hard earned lessons shape the way we fish, particularly when it comes to presentation.

There are those times when you outfish other anglers fishing alongside you, some throwing the same plug or jig and attempting to match your retrieve. It leaves you wondering what made the difference on that particular day. On those occasions when I’ve been fortunate enough to be in the driver’s seat, I’m convinced the difference was simple little things like using a much lighter leader, or tying direct to a bucktail, lead head or popper. It has happened too many times for it not to be making a difference.

Some of those nights on the Cape or inside Fire Island Inlet when live eels were the key to silly numbers of cow bass, there were times when a 40-pound leader was enough to discourage a bite and it took dropping down to a 20-pound leader to score fish. There were even nights in some calm back bay areas where foregoing a leader and tying direct with 15-pound pink Ande mono was the deciding factor. Now I know some of you out there are saying “I’ve caught lots of big bass on 50-pound leaders,” but isn’t it possible you would have caught more fish had you gone lighter, especially on those tough nights when bites were hard to come by?

It is not just stripers that can be discouraged by too heavy a leader. I’ve had many times when bluefish were turned off by a wire or heavy mono leader. I never use a wire leader unless I’m in a blitz of big blues and they are inhaling plugs or metals. I’ve had too many experiences where those of us using mono or fluorocarbon leaders were into “every cast” type action while those using wire were reduced to spectators. Also, the wire will more times than not reduce your chances of culling out any striper looking to feed off the scraps created by blitzing blues. Where visibility is concerned, using fluorocarbon leader material is always a good choice these days but I’m not sold on it being entirely invisible to fish. I do however believe it helps, and if using it provides even the smallest edge, why not use it?

Another consideration when it comes to presentation is the effect heavier and thus stiffer leaders (mono or fluorocarbon) have on the action of a lure. Connecting a small swimming plug to a heavy leader does not make for a good presentation and can actually impact the lure’s ability to swim properly. It’s a case in point why lighter tackle will almost always outfish heavier tackle when the use of lighter gear is appropriate.

Another factor affecting presentation at the terminal end relates to the use of snaps and swivels. Keeping the use of these connectors to a minimum will almost always improve your presentation. I never use snap swivels to attach a lure but will use a swivel to connect braid and leader when necessary to avoid line twist from tossing certain metals. If you are using a snap, it should be kept to a size that matches the lure you are using. I’ve seen some casters tossing small bucktails, soft plastics and swimming plugs connected to a 150-pound Duo Lock or 175-pound Quick Clip. Talk about screwing up your presentation.

There are some lures that fish better by tying direct. I’ve always found that bucktails fish much better when tied direct which can be a pain in the %&# when fishing inlets or anywhere current is a factor in your fishing. Changing lures to adapt to changes in current flow is obviously much easier with a snap and so there are times I will get lazy and rely on a snap, knowing I might be compromising my presentation. Standard poppers are another lure that I’ve found more success by tying direct, especially where bass are concerned. Again, too many situations where everyone else was throwing similar poppers with a snap or snap swivel and not having the same success. When it happens enough times, you have to believe it is making a difference. 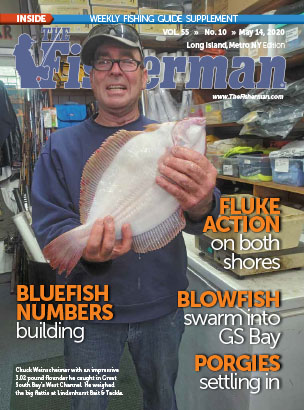