Over the years we all build memories of awesome catches, times shared with friends and family, and memorable outings. Those memories can last a lifetime, and be shared with anyone willing to listen.

My own memories include two days in the fall of 1986. I know it was the fall of 86 as I had just purchased a new Ford F250 truck in my favorite color – dark blue. It was a late September morning during one of the more memorable mullet runs that occurred back then. I had planned to meet Fred Golofaro and Doc Muller at Gilgo at daybreak as we had perfect conditions – outgoing water, light southeast wind and mullet filling the wash.

I left my house around 5 a.m. and headed towards Sunrise Highway in Manorville on Long Island. I was filled with expectation as Fred had assured me it would be a great morning. As I rounded the bend on Barnes Road, a 250-pound, 7-point buck decided he was going to try and ruin my day. Baboom! The buck crashed against my cooler rack, smashing it to pieces, then swung his butt into my passenger side door.

I jumped out of the truck to find the buck still alive. I felt bad for the deer but there was little I could do except pick up the pieces of my cooler rack. I wire-tied the pieces back together as best I could, still intent on getting to Gilgo before first light. The deer finally expired and I limped off to Gilgo in my damaged truck. The day was not starting out as planned, but I was confident things would get better. 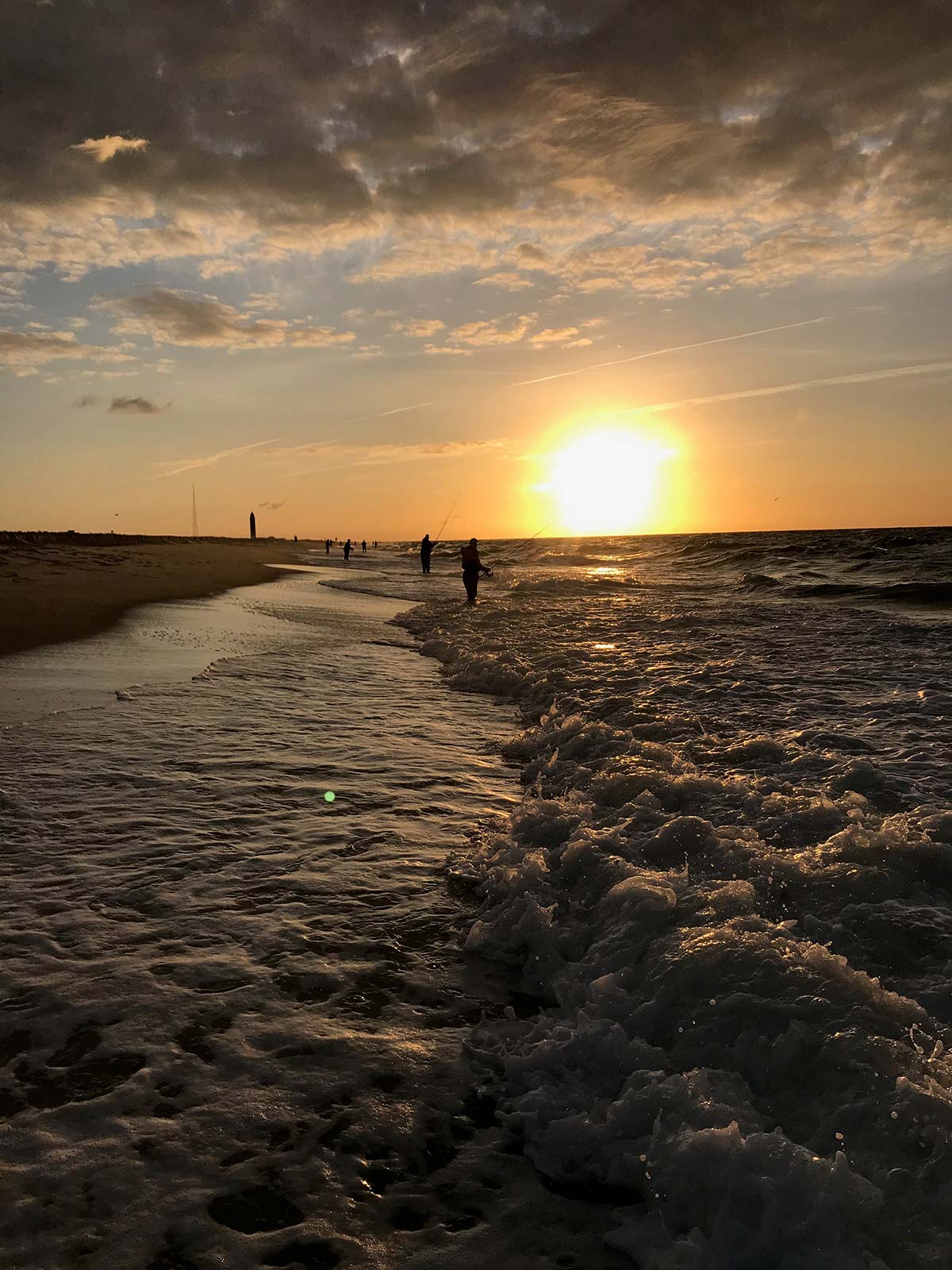 I arrived at Gilgo and Fred and Doc were like, what happened? I explained, we laughed, then headed towards the water. Fred and I were walking west when we saw a huge swirl about 25 yards out, followed by a huge tail slap. Fred commented “that was a big bass,” and we immediately began working poppers on the surface, hoping to draw a response from the fish. Eventually we worked our way down to the point on the western end of Gilgo where mullet had been thick for several days. Before we left, Fred said, “Let’s come back real early tomorrow morning with some live eels for that cow.”

We started casting at the point and within minutes were into fish. Bass from 25 to 35 pounds hit the beach that morning with a 38 for myself, which softened the blow of my early morning collision. I don’t recall how many bass we caught, but we all had several fish over 25 pounds. As we walked back to our trucks, Fred said, “tomorrow we come back before dawn with eels.”

The following morning, armed with live eels from Fred’s 35-gallon eel tank, we returned to the pocket where we had seen the big bass swirl the previous morning. We began casting and retrieving the snakes, and less than 15 minutes into the session Fred was hooked up. He knew immediately it was a “good fish.”

After two spirited runs, the fish was on the beach. It tipped the Chatillon scale to 48 pounds and then Fred rushed to release the cow. We quickly got the fish back into the water, but the moderate surf made it difficult to revive the fish properly. We tried for 20 minutes but two attempts at letting the fish swim free resulted in her washing back up onto the beach. There was little choice but to keep the fish, which left Fred noticeably upset.

Being the good friend I am, I couldn’t help but take advantage of the situation. I began chiding him about killing the fish and repeatedly told him “I can’t believe you kept that fish. You should have released it.” He could not believe what I was saying and his look of dismay was all I needed. The reality was he hadn’t kept a bass all season and over the years had successfully released numerous fish in the 40-pound class. Several decent fish later, the tide had dropped out and we headed back to our trucks, with me still breaking his chops.

This was one of many fond memories I have of those trips with Fred, my mentor and friend, and who I often called “dad!”

Have a fishing “tail” to share in the “tale end” of The Fisherman?   Email your 900-word Tale End story to jhutchinson@thefisherman.com.