If you’re a kayak fisherman, you really need to enter The Fisherman Magazine’s Coastal Kayak Clash (CKC), it’s a fun and competitive tournament that puts your angling prowess to the test against kayak anglers all over the Northeast coast. In addition, it really tests your skills targeting eight inshore species throughout an entire season; weakfish, porgy, fluke, sea bass, sea robin, hardtails, bluefish and tautog. There are big prizes for the top three finishers as well as each angler topping the eight, ‘fish of the month’ categories. The event runs from May 1 to November 30th and it gets pretty competitive, especially at the end. Check out the rules on The Fisherman’s website to get the full details.

I have competed in the CKC for the last two seasons, I took third place in 2020 and in 2021, I upped my game and landed a first place finish. I have been fishing for as long as I can remember, ever since my father took me for the first time when I was 3. That turned into a passion that continues to this day and keeps getting stronger every year. I imagine many of you reading this have similar stories and can relate.

I hail from northeast Massachusetts, growing up fishing for bullhead, carp and other warm water species in the Concord River. Over time, I graduated from freshwater to saltwater fishing, working on a headboat for groundfish for 7 years before moving on to my current day job, unfortunately not at all related to fishing. I bought my first fishing kayak back in 2014, a Hobie Pro Angler 14, which completely changed everything for me. All those fish I was seeing in The Fisherman Magazine were now available to me without having to hop on a local headboat. I fell in love with the species that swim south of Cape Cod, especially the bottom fishing. What’s not to love about fish that like to bite and taste great?! Despite the minimum 1.5-hour ride to and from, I am addicted to this Southern New England fishery.

What Worked For Me

First off, fish your weather windows whenever you can. Being in a kayak means you’re at the mercy of Mother Nature. I kept a careful eye on the wind using the NOAA marine forecast website and using various weather apps as a backup. This is especially important early and late in the season when the water temperatures are low and the chance of complications from exposure are the highest. When I saw these weather windows pop up, I fished, even if it meant having to make it a short day so I could stop at home before heading to work in the afternoon. I made 37 trips this season where I fished in the kayak for the CKC, many of which were pre-work trips. Simply put, the more time you spend on the water, the better your chances of hooking that fish that could land you in first place.

Figuring out when to fish for certain species was the next strategy I used. I focused on certain times of the year when each species was likely to be the largest and most abundant. The first couple weeks of May, I fished for tautog and scup. Once black sea bass opened up in Massachusetts, I targeted them and scup until the fluke started to make a good showing during the second half of June and switched my focus to them. Once the albies crashed the scene I focused hard on them for most of the month of September and when they thinned out, I was ‘all in’ on tog until the end of the tourney.

The “fish of the month” is a great guideline to use when planning out your fishing strategy. The timeframes match up closely to when each species is abundant throughout the tournament’s range with the exception of bluefish. The trend with bluefish has changed a little bit over the last few years, especially when you’re talking about big ones, but that could change again during the next fall run so don’t discount it.

Another tactic you can use is to look over the leaderboards from the past CKCs. Each name has a three-letter designation next to it, NEF stands for the New England Edition, LIF is the Long Island Edition and NJF signifies the New Jersey Edition, this tells you the region where the fish was (most likely) caught. But no matter where you’re from, you can dial in on hot times to target certain species by paying attention to the location and posted dates on the leaderboard. The timeframes remained pretty consistent from 2020 to 2021 and don’t forget you can go into The Fisherman Magazine archives and compare the leaderboards throughout the tourney and get the added benefit of the weekly reports. Here’s a little cheat sheet from me; my four catches that ultimately lined me up for the win were; a 23.5-inch black sea bass caught June 11th, a 17.5-inch porgy caught May 13th, a 26-inch tautog caught November 11th and a 27.25-inch false albacore taken September 10th.

What Didn’t Work For Me

Sometimes people don’t listen to their own advice. This was the case for me when I lost what is traditionally the best part of the year for fluke fishing in my spots to weather and sleeping in. Take advantage of the weather windows when you get them because you never know when that freak summer storm might roll in or when it is going to blow 20 knots out of the SW for a week and you can’t get out. This is what happened to me this year and my favorite fluke spot is not where I want to be in a kayak when is 20-plus out of the southwest and there are 4-foot breakers.

Another thing that I didn’t do was the mid-season maintenance to my kayak and electronics. DON’T NEGLECT THIS! I was plagued by my fish finder shutting down due to what I thought was a voltage dip in my battery. It turned out that it was actually due to a poor connection I found in November when I had to pedal in and beach the kayak for an hour while I replaced every connection between the battery and the fish finder. I also had an issue with one of the chain cables in my Mirage Drive, I noticed it when I was already out fishing and it took me more than an hour to get back to shore so I could replace it. These simple, but often overlooked, things can be the difference between a first place finish or being off the water when you would have caught that first place fish.

Obviously, the CKC is a kayak competition, therefore this platform is perhaps the most important piece of equipment I used. I fished out of my Hobie Outback for the duration of this year’s tournament. I enjoy being able to navigate hands-free if I am trying to fish on structure or stay in a productive area. I was able to stem the tide and stick on the piece of bottom or tide line that the albies kept popping up on while continuing to fish. Keep in mind, being hands-free certainly helps, but I have friends that could out-fish me two to one for albies on their older Ocean Kayaks. It’s all about how you use that piece of equipment you float on.

During the 2020 CKC, I was fortunate to win the third place prize which was the Humminbird Helix 9. The Mega Imaging was instrumental to finding several of the fish that landed me in first place. Using this, I was able to fish the areas of sand off isolated rocks for large scup and fish right in the structure that was uncharted for large tautog and black sea bass.

This year, I only used three rods to catch the fish that won me the tournament: a heavy casting rod for fluke and tog. A medium/heavy spinner for throwing plugs and tins and a ‘slow pitch’ style rig for jigging tog, sea bass and anything else that might come along. I feel like there are many options on the market for any CKC hopeful looking to gear up for this year’s event. One word of advice, I like the 7-foot models so that I can swing the rod tip around the bow and stern of the kayak for those stronger and faster fish like tog and albies.

As far as rigging up, keeping it simple proved to be the ticket. The black sea bass ate a bucktail with a soft plastic grub teaser. The scup and the tog both came on lima bean style jigs tipped with a crab and the albie ate a silver 3/4-ounce Game On Exo Jig. These are far from secret or high-tech baits for any of these species but they’re widely used because they are effective. These were rigged with fluorocarbon leaders from 15- to 30-pound test depending on the target fish due to abrasion resistance.

What I like about the CKC is that anyone with a kayak and a little bit of time to do what they love can win. You don’t need a ton of expensive gear or the best or newest kayak and electronics out there. Every part of the northeast has their niche fishery that’s included in the tournament. For example, it seems like New Jersey was the place to go for large bluefish this year, while Long Island Sound was the place for monster sea robins. Those past leaderboards can really tell you a lot and may just contain the road map that this year’s winner will follow. The patterns are there for you to find.

For 2022 I plan on changing the way I fish a bit, focusing more on one species a day to maximize my effort. I also have some new techniques I plan on exploring more, some of which were working well for me at the end of last season, but I ran out of time to fully master them. These little tweaks can mean the difference between topping the leaderboard or not making the podium at all.

I look forward to competing against some of you in 2022. Above all else, while the Coastal Kayak Clash is a competition, it’s supposed to be fun, make the most of your time on the kayak this season and you might just be writing a story like this one in 2023. 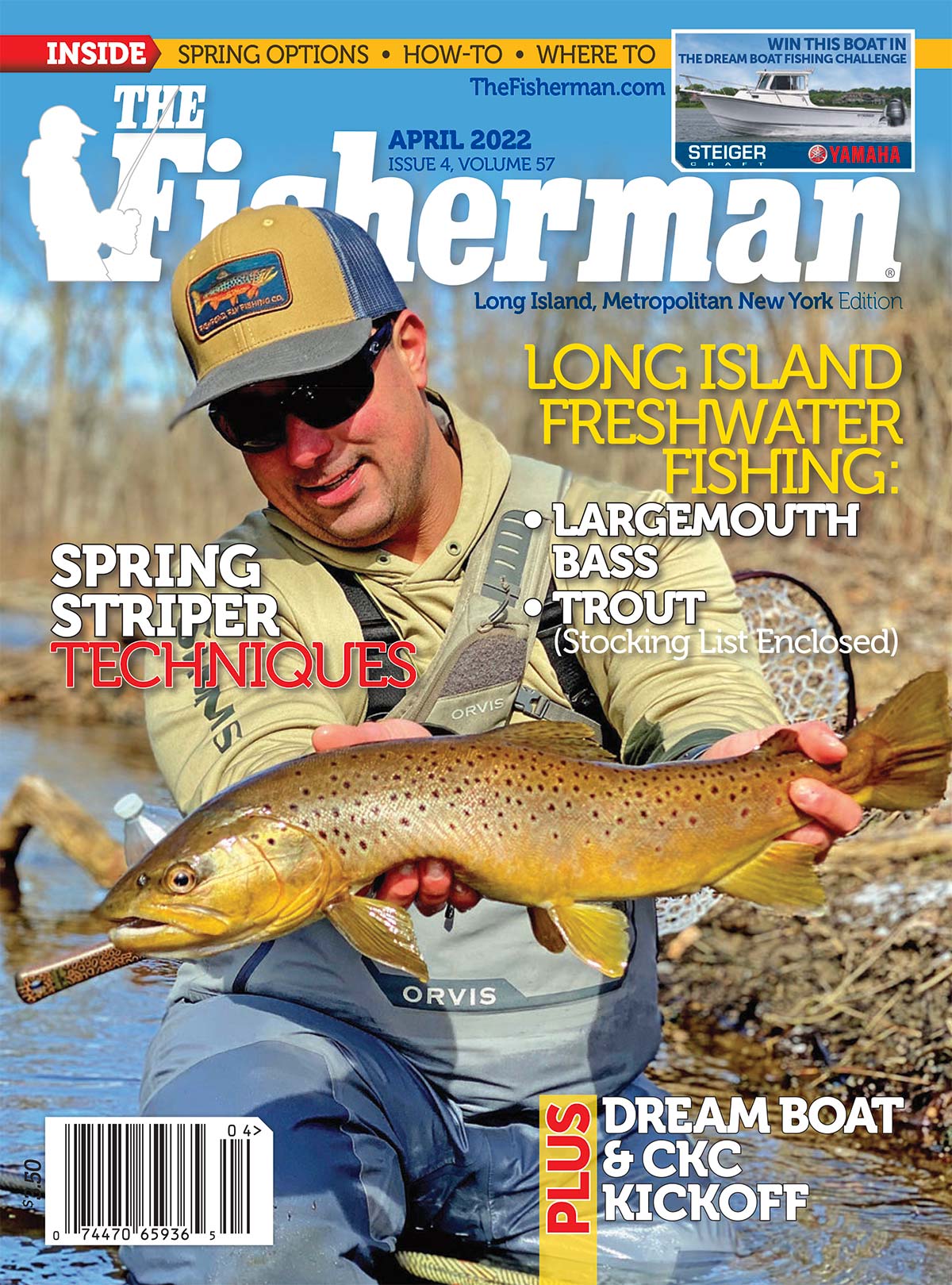