You don’t have to run far in the cool waters of eastern Long Island Sound to find uncommon, warmwater fish. The tidal areas surrounding the Millstone Nuclear Power Plant in Waterford, CT, have a longstanding reputation for unusual catches.

“Last summer,” says Tim Lausa, a local saltwater expert with over 20 years’ experience, “I was fishing with some friends at the Millstone warmwater discharge when we had an extraordinary sighting. It was early on a Saturday morning, and a many kayakers and boaters were positioned and working the outflow. We had set ourselves up flanking the current and were looking for any surface action. Off the bow, I suddenly noticed rainbait jumping, and looked to make a cast hoping a bluefish was below. I glanced down before casting and saw a large shark, about 8 feet long, swimming just in front of our bow. I said a few words unfit for print, and one of the guys I was fishing with looked down, saw it, and said the same. I had never experienced anything like it. The big predator was greyish brown and about the size of a nearby kayak. The shark was likely stalking the small blues that are attracted to the bait schools holding in the warm water.”

The Millstone Nuclear Power Plant intakes about 2 billion gallons of seawater a day to cool its reactors, and then expels the heated water—which appears like whitewater rapids—back into Long Island Sound. The discharged water is about 20 degrees Fahrenheit warmer than the surrounding Sound. Local fishing experts and biologists know that the heated water, termed the plant’s “thermal plume,” stretches about 8,000 feet out from the discharge pipes and annually attracts small bluefish and schoolie stripers, but it also attracts a variety of uncommon “exotics.”

During the years immediately following the 9/11 catastrophe, Homeland Security regulations prohibited fishing anywhere near the plant—from shore or boat. Since then, some of the restrictions have loosened, and boat anglers are again permitted access to some of these prized waters, but only on the east outflow side. Shore-based fishing from Millstone Point, once very popular, is prohibited.

Stripers, blues, and exotics also often school and work the surface around the intake (west) side of the plant, and this can be frustrating for anglers because you can only fish that shoreline with your vessel outside the warning buoys (exclusion area non-lateral markers). The key and legal method is to cast shoreward from outside this perimeter and hope to reach blitzing fish.

Leading the pack of uncommon visitors are the coveted tunoid species including false albacore, Atlantic bonito, and Spanish mackerel. Late each summer and fall, these three members of the mackerel family are attracted to the plant’s warmwater discharges and perimeter waters. Millstone is one of the few nearshore locations where your chances of hooking an albie, bone or mack are as high as when making the run across the Sound to major tidal entrances like Plum Gut or the Sluiceway. Here a small-boat owner can comfortably fish within casting distance of shore during a howling 25-knot northwesterly and be within about a mile of two public boat launches.

The reason fishing at Millstone is often hot for these and other species is because its warm outflow draws and concentrates schools of baitfish like silversides, squid, bay anchovies, and peanut bunker, harboring them in the warm water for months. The bountiful bait, in turn, attracts predators late into the season.

Bonito and Spanish arrive along southern New England the last week of July, which is several weeks before albies move in. By the second week of August, they’re around in numbers great enough to target, and they usually peak in late August when the albies start to invade. During good years, albies stay through October and even into November.

“Anytime I’m hunting for albies and bonito,” says Capt. Dixon Merkt (retd.), “I always swing past the plant and have a look. If the boat traffic is light and I see signs of birds or fish, we’ll stop to cast. But sometimes the fish are holding deep in the current, and you won’t see any signs on top. So then you just have to make some exploratory casts.”

Anglers fish the discharge with fly or spinning tackle, and both methods produce little tunny, bonito, and Spanish. With either technique, the common strategy is to jockey within reach of one of the outflows—often only a boat’s length away from the stone riprap—and idle or cut your motor. Immediately begin casting across the flow, letting your lure or fly swing downstream while using a slow retrieve. Your goal is to imitate a baitfish struggling against the current, so the typical fast-cranking retrieve appears unrealistic to keen-eyed fish.

Methodically work the entire length of each discharge until you find predators. They feed anywhere from the fast whitewater emanating from the steel bulkheads to the slowest tailwaters 100 yards or more from the shore. Some exotics often hold tight against the stone riprap flanking either side of the discharge. 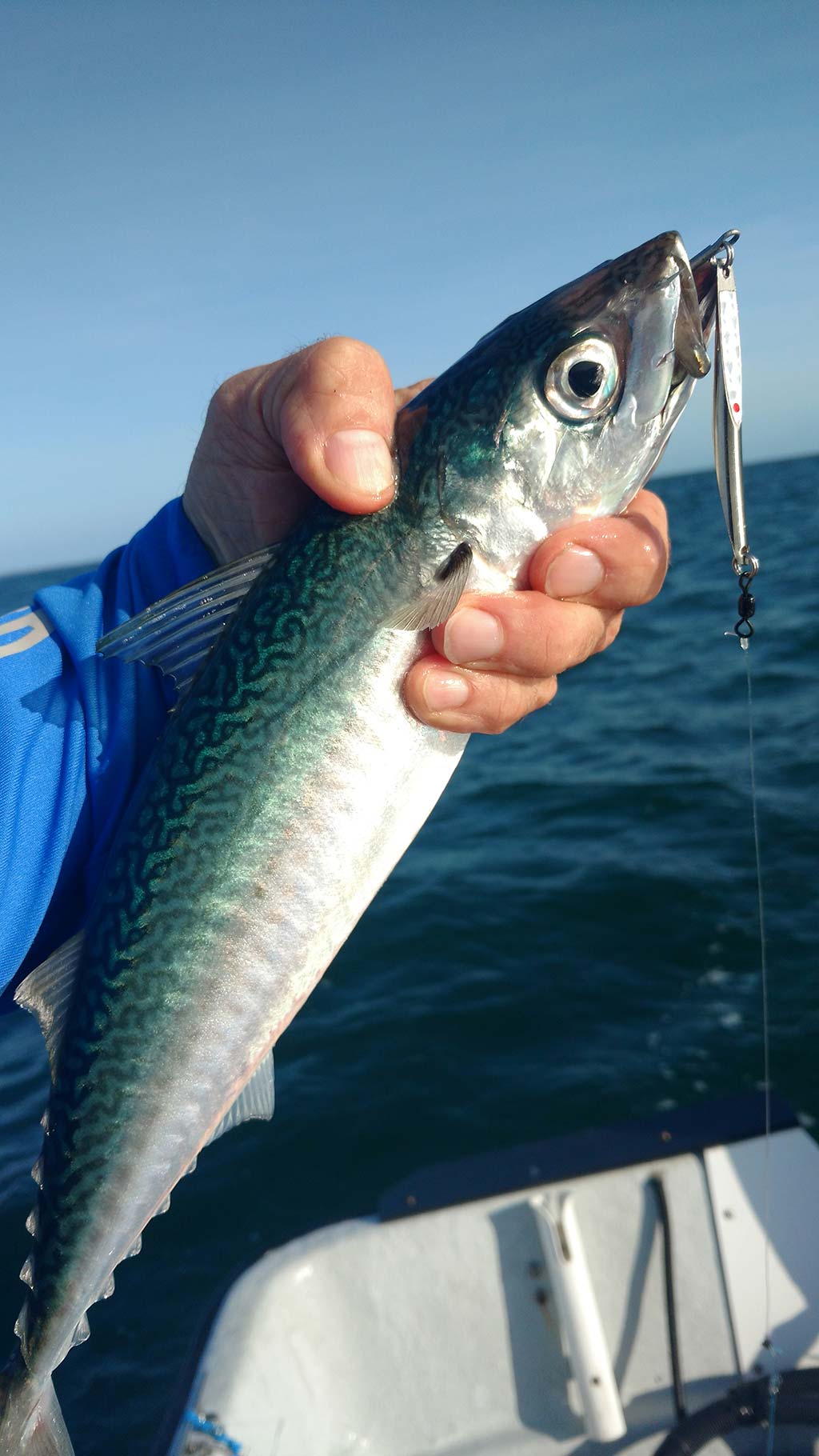 Unlike Atlantic mackerel, which frequent cooler waters from Block Island to Maine, chub mackerel tolerate warmer water and migrate north into southern New England as the summer heat raises water temperatures, and they’re particularly attracted to the warmer waters near Millstone Point. Chub mackerel (Scomber colias), also known as hardhead and bullseye mackerel, are not to be mixed up with our common spring-run Atlantic mackerel (Scomber scombrus). The chub so closely resembles the common mackerel that they’re easily confused in hand. From a distance, many local anglers, unfamiliar with the identifying trademarks of chub mackerel blitzes, immediately assume they’re witnessing harbor bluefish, false albacore, or bonito.

These portly mackerel will take sabiki rigs, small metal lures like a #3/4 Long Deadly Dick, and baitfish-imitating flies like Clouser Minnows. Chub mackerel are good eating when immediately bled, iced, and put fresh in the smoker. The trick to catching them, however, is getting a cast into a blitzing school before they vanish because, like albies, they stay up for only short periods.

Jack crevalle frequent tropical water and are not well suited to cold water. They’re a migratory species, so they avoid the cold water except in the case of the Millstone warmwater discharges. Small schools of young jacks occasionally maraud the riprap flanking the discharges late into the season. My catches using a Deadly Dick occurred in the third week of October.

Jacks’ local diet consists of the small baitfish staging in or near the outflow. They attack in small, tight schools, often clearing the water. The jack crevalle looks like a small amberjack, and they’ll give you a good identifying look when they clear the water as they work baits, but they move very fast so you must be quick on the cast and lead the pack in the direction they’re feeding.

The Atlantic needlefish possesses a body shaped exactly opposite a jack, but they can be found feeding alongside each other at the plant. Jacks have wide, platter-shaped bodies whereas needlefish, like their name suggests, are long and thin. Jacks work quickly through a feeding area, but needlefish ghost along the surface slowly tracking their prey. On calm days, you can spot them following a small lure by the v-wake they create.

Their slender and elongated body is bright silver on the sides and blue to dark green along the back. They swim close to the surface and hunt smaller fish. They’re fun on light tackle because they’ll often jump when hooked and put up a good fight for their size.

Needlefish aren’t fussy and will bite almost anything resembling local baitfish, but they’re not always easy to hook because of their unusual, long, narrow jaws armed with sharp teeth. Use caution unhooking them.

Sheepshead, a southern-waters fish, is a member of the porgy family; in fact, sheepshead have the shape as a big porgy but are distinguished by larger teeth and they have a gray coloration with wide, black vertical bars. These bottom feeders, along with occasional triggerfish, are landed by tog anglers anchored over the rocky bottom near the perimeter of Millstone Point. It’s difficult to target those two species, but you have a chance whenever fishing with green crabs because, like blackfish, both feed on crustaceans.

Small, banded rudderfish are bluish, greenish, or brown and have six dark, vertical bars on a slender body and dark stripe from the eye to first dorsal fin. Rudderfish are known for hanging under floating debris offshore, but if you want a shot at these small, jack-like fish, use a small metal lure and cast as close as possible to the exclusion area warning buoys running along the west side of the power plant. These fish hang directly beneath such objects, and then you can have fun fighting the fish out and away from the mooring chains!

As you can see, the Millstone outflow offers a plethora of local and exotic species, which makes it one of the most unique fisheries in New England. Next time you’re shoving off from Niantic or another nearby port, give Millstone a few casts because you really never know what you might catch!