Tips to be sure that the connections between the angler and the fish are rock-solid.

When it comes down to it, there’s really only one thing keeping the angler connected to the fish, and that’s rigging. Tips and tricks listed below are sure to give you the extra edge that will put fish on deck.

Making sure that a reel is properly spooled with adequate line is essential in order to have the best chances of boating a fish. Whether using mono, braid, or hollowcore, it is imperative to make sure the line is in perfect condition. Any chafes, nicks, or worn areas create a weak spot in the line and could ultimately cost the boat a fish and lure. Replace worn out line immediately. Mono line should be replaced often, especially top shots over hollowcore since it is exposed to the sun more and is more susceptible to UV rays.

Also, important to add, the first 100 yards or so on an offshore reel is the line that takes most of the wear. The choice of line on offshore reels is totally up to the angler. However, mono in the 50- to 80-pound range and hollowcore from 100- to 130-pound is most common on reels from 30s all the way up to 80s.

The type of leader that should be used differs depending on the type of fishing that is being done. When fishing for offshore pelagic species, leader weights can range from as low as 20-pound all the way up to 300-pound test. When fishing for mahi with light spinning tackle, a 3-foot section of 30-pound fluorocarbon will suffice, but when trolling for tuna, 150- to 250-pound leader is more common.

Regular mono leaders to be used when trolling should be long enough for the leader man to grab when an angler gets a fish boat-side. However, it should also be short enough to not interfere with the angler reeling in the fish (unless using wind-on guides).  The purpose of the leader in this particular situation (trolling) is for added abrasion resistance as well as making it easier for the leader man to gain control of the fish.

Mono leaders can be used for a variety of fishing types. Some applications where a mono leader would be beneficial are trolling lures such as spreader bars/daisy chains, casting surface plugs or poppers, and for general purpose fishing where fluorocarbon isn’t necessary.

When using fluorocarbon while trolling, there are other advantages in addition to those that come with mono. Fluorocarbon line is more abrasion-resistant than mono and it also becomes invisible underwater. Sometimes using a fluorocarbon leader can make the difference between a good and bad day of fishing when the fish are finicky.

Fluorocarbon has more of a specific time and place to be used as opposed to mono, which can be used for most general types of fishing. Sure, fluoro can be used anywhere that mono is, but it is very expensive and wouldn’t make much sense to use it where it’s not necessary. Some applications where it does have an advantage over a mono leader would be when trolling Joe Shutes or ballyhoo deep and/or way back, baitfishing (chunking for tuna or mahi), jigging, or trolling sub-surface lures. For trolling, fluoro in the 100- to 150-pound range is typical, chunking for tuna will usually require anywhere from 30- to 80-pound fluoro, and light tackle mahi fishing uses 15- to 40-pound fluoro.

The reason that fluoro would be best suited in these types of fishing is because these lures are deeper in the water instead of being on the surface like spreader bars or daisy chains. When lures run in clean and clear water, such as on a way back or long rigger, the mono may stand out more in these positions as opposed to on a short flat-line, where there is prop-wash and wakes to “confuse” the mono leader with. Fluorocarbon becomes invisible underwater, so therefore it is much more effective than mono in the clean and clear water of the way back and sub-surface lures.

Crimping is one of the most effective ways to make a consistent connection to a swivel, lure, or to make a loop. When done properly, crimps allow for a connection that is up to or even exceeds the line strength. One of the most important things to note is to be sure to choose the proper crimp. I have calibrated my bench crimper perfectly and have 150-pound mono and 130-pound fluorocarbon breaking well above their rating. It is definitely a reassuring feeling knowing that there is the strongest connection possible between the angler and fish. With a bench crimper or crimpers that can be calibrated, it is relatively easy to get a perfect crimp every time.

When using hand crimpers though, there is a lot that goes into making sure the crimp is perfect. This requires quite a bit of trial and error until a person gets “that feeling” of the perfect crimp. Most experienced anglers or tackle riggers have that knack for it and can get a good crimp most of the time. It’s an art to be able to apply just the right amount of pressure to a crimp so that it’s not over or under crimped.

When a crimp is compressed too tightly, it crushes the line, therefore weakening it. This is called “over-crimping” and in this case, the line will break inside the crimp itself in the event of a failure. This is the most common mistake made by those who are newer to crimping since they usually think their crimps aren’t tight enough. After crimping a lot, most anglers can tell when the crimp is fully compressed, and the line starts to crush. This all comes with experience, along with trial and error and many crimps/tastings.

When crimps do not have enough pressure applied to them, it is pretty obvious what would happen. The line slips through and the lure, fish, and thoughts of some nice sashimi later at the dock are gone. Under crimping is almost as bad as over crimping, however, I would rather have a slightly under crimped line instead of an over crimped line, where the mono is crushed.

One other important thing to note is that the ends of the crimp should not be crimped down. When they are crimped down, the sharp edges dig into the line and can weaken it, causing a break. Leaving the ends flared (which naturally occurs when crimping) will prevent the sharp edges from making contact with the line.

I used to use a Bimini twist to attach a swivel to the main line. This worked well for many years. However, it is time consuming and impractical to do on a boat should a swivel need to be reattached. I started crimping ball bearing swivels directly to the main lines, which are 50- and 80-pound mono. This is going on my sixth season doing this, with no failures (knock on wood)! I calibrated the crimper perfectly, so I know that the main line connection is flawless.

Choosing the proper hook is essential, and making sure the point is sharp is just as important. When fishing inshore for smaller fish like fluke, sea bass, weakfish, etc., a thin wire hook is more than enough. When fishing for large pelagics however, it is necessary to have a hook that will stand up to prolonged stress and high amounts of drag. One of the most stressful times for a hook is right at the endgame, when the leader man is pulling the fish up in order to get a clean gaff shot.

When inshore trolling for tuna, most lures have a hook that ranges from a 6/0 to 10/0 hook. The bigger the lure, the bigger the hook—usually. Spreader bars and daisy chains are some of the most effective trolling lures for tuna. They are complex and somewhat time consuming to make, so for these lures, a stainless hook is a good option since they don’t have to be replaced due to rust or corrosion. Duratin or non-stainless hooks work fine, but just need to be replaced more often. An all-around good hook choice for pelagics, whether it be for lures or ballyhoo, is the Mustad 7691 style. This hook is made in stainless and duratin. When chunking for tuna, a 4/0-7/0 3x live bait hook works fine.

As for trolling for smaller pelagic species such as mahi, bonito, or false albacore, the same hooks listed above, except downsized slightly, work fine. Typically, a 5/0 to 6/0 works fine. One important thing to note for all hooks of course is to make sure they’re razor sharp.

Some tackle manufacturers will use swivels, and some will use loops to connect the mainline from the reel. There are advantages and disadvantages to both. One advantage of the swivel is having the ability to, well, swivel. A disadvantage of swivels is that it’s just one more thing to break. When attaching a swivel, a loop still must be made. Although rare, even the highest quality swivels can break because of corrosion, wear, or manufacturing defect.

A loop is what most tackle makers will use as their primary connection point. Some use an offshore loop, which is also effective when done properly. A disadvantage of a loop is that it is susceptible to chafing. There is a way to combat the chafing though, and that is with chafe gear. There are many different types of chafe gear that range from stainless rigging springs to small clear tubing. There is also a small and thin black chafe tubing made by Diamond, Fathom, Braid, and many other tackle manufacturers. All forms of chafe gear are effective, but I prefer the black tubing since it is the least bulky of the types.

Overall, there are a lot of different aspects to rigging and making sure everything is perfect. When spending hundreds of dollars in gas, ice, equipment, and even more on the boat itself, it is important to not skimp on quality rigging components. With so many variables working against a crew to put fish on deck, your rigging should not be one of them. 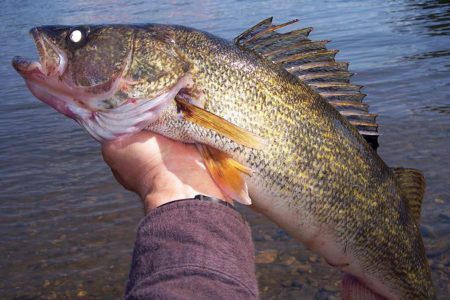 It might just be the tastiest freshwater species you’ve targeted! 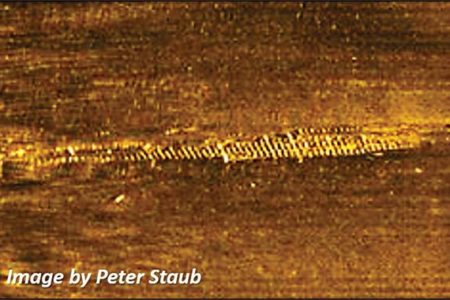 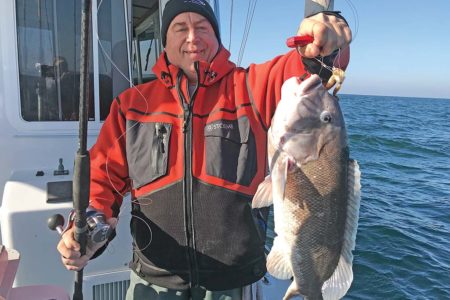 Back In Blackfish: So, You Wanna Be A Togger?

New Jersey’s blackfish bag opens up in the middle of November.