A quick couple of winter flounder could make a tasty addition to that box full of sea bass or spring cod.

It was maybe six years ago in June when I hopped on the Dauntless out of Point Pleasant with a strategy to target ling and sea bass that had made a summer resurgence once again in Jersey waters. After a few drops I pulled in quite a few ling for the cooler, but noticed I was swinging on a lot of short, hard bites but not connecting.

Switching up my 3/0 Octopus hooks, I looped on a size # 1 beak hook to see if I could hook what was short biting me. After a quick bump I set the hook and began a pretty formidable fight up the water column thinking it was a small cod.  But when the net went down to scoop, up came a fat, brown, 4-pound winter flounder. After that fish, I pulled up nine other flounder all between 2 and 4.5 pounds, sharing my catches with the other patrons.

And I wasn’t the only one catching flounder on that trip.  But you might be, if you come prepared for those late-spring, early-summer wreck trips!

While winter flounder season during springtime is located in 5 to 12 feet of water, June fishing takes place deep in the 80- to 100-foot depths. They seem to regionalize in northern Jersey and like gravitating around areas of structure such as of rocky rubble, concrete casings and low lying shipwrecks. Spots that have produced for me have been the Farms, 17 Fathoms, and various wrecks in the Mud Hole including the Oil Wreck and Arundo.

Snelled hooks beak size #2 to #4, and a rig that must be lying flat on the bottom.  Personally, I’ve tried with hooks that are even 2 or 3 inches up and they will not hit those baits up above them. For successful presentation, baits need to lay straight on the sea floor. My rig consists of the old “Belmar Rig” with an 8-foot top shot of 40-pound monofilament leader with a double overhand knot tied on the end; loop on a bank sinker, then pinch 2 inches above the sinker and via lark’s knot snell on the hook with a 12-inch leader. The bait will lay flat on the bottom with this type of set up.

Baits need to be cut down to size to fit in the peanut-holed mouths. Without a doubt, clam ribbons are the primo bait, threading them on the hook and leaving about 2 inches to flail off the hook for attractant. Hook the ribbon similarly like you would a bloodworm in the spring season. Other baits are small half-inch slices of fresh clam tongue, and don’t forget to douse any baits you drop down in FinEssence shedder crab, shrimp or clam oil for added scent attractant. Even though you are fishing deep waters, flounder will still follow the pattern of finding a chum slick scent trail and flowing to it. The more scent in the water, the better. If specifically targeting the blackbacks, you might want to employ regular attractant tactics like lancing a small yellow grub on the shank of the hook or a yellow bead or two above the hook.

I’ve noticed that offshore flounder follow similar packing patterns as they do when in the shallow bays. Where you find one fish biting, there’s bound to be more. There’s a packing up behavior just like in the springtime in the back bays and rivers. That mentality means thinking more like a blackfisherman when on the boat. If you see someone scoring flounder 20 feet away, make the right mugging move and head there to drop your rig down near him (provided you know the person well!)

As flounder pack up, you can have drop and reel fishing once the scent gets started in the same spot and flounder inherently begin to feed. Try different spots around the boat, but always pay attention to where any flounder are coming up. If you are on a party boat and see a guy hooking up on the starboard side of the boat but there is no room to fit in near him, gauge the same spot on the port side and drop your rigs down, as most likely the flundies will be spread along that same line.

Mainly you will be using your normal wreck fishing gear, but more on the lighter side. A 7-foot medium power, moderate to fast action conventional rod rated for 20- to 40-pound matched with a Shimano Torium 16 reel spooled with 50-pound Power Pro braid should be sufficient to fish deeper water and yet still have the sensitivity to feel the flounder bites and impart an effective hookset.

Even though they may seem small in stature, flounder will hit hard even at those depths and a 3- to 5-pound fish will fight hard, literally pulling off drag using their fat framed bodies to dog you back down. Many times anglers think they have hooked a cod only to see the fat flatfish come up. Be sure your drag is set properly allowing for some give as a locked down drag will most definitely lead to a pulled hook as the doggedness of a flounder will rip the hook out of its thinner fleshy mouth.

Generally, winter flounder really seem to be on the chew in those deeper waters during June and July, so if you are gaming to land a few, it’s a good bet to plan around that timeframe. Of course, with a two fish limit at 12-inch minimum size, it’s always recommended to bring a bunch of people on the boat to tally up a respectable bunch of fillets for the frying pan. 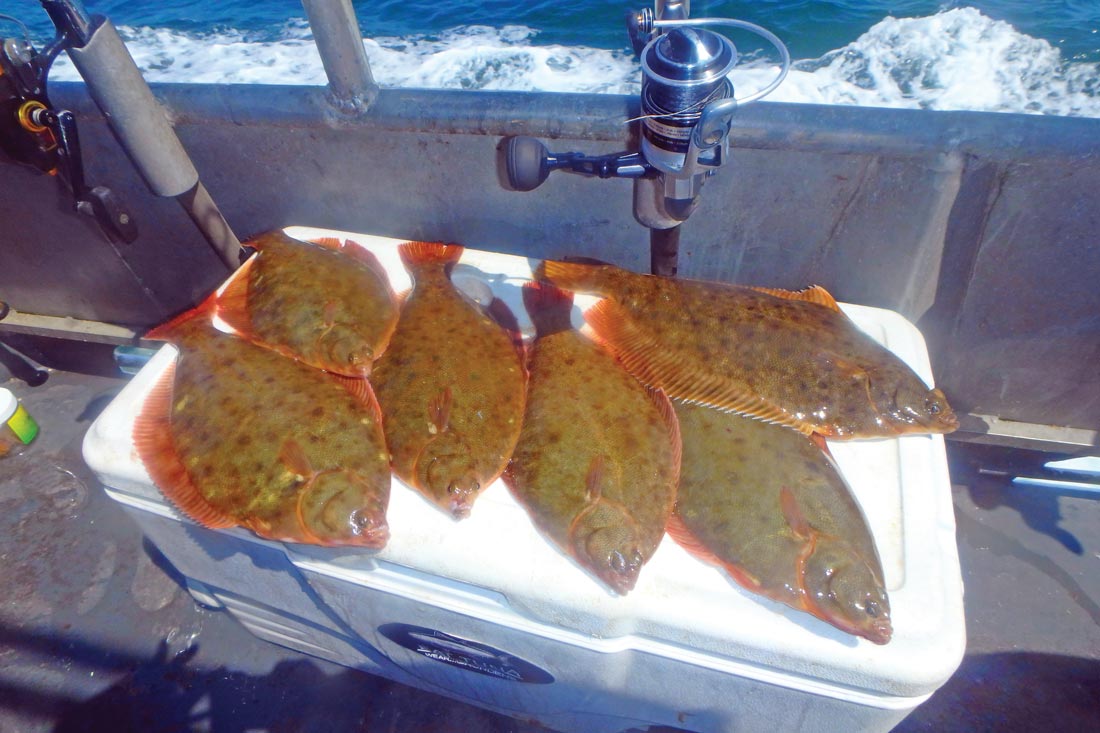