So how did Lloyd Kee and Dave Aquilino achieve the top spots? In speaking with both, they offered some interesting comments: There is no substitute for putting in time on the water. Lloyd and Dave were typically out four to six days/nights per week. While Dave was able to concentrate on his tried and true locations on the north shore, Lloyd scoped out and developed additional productive fish locations. Whereas in prior years Lloyd could rely on three different locations, in 2016 he found himself frequenting five to six different locations. Lloyd commented that the bass were more difficult to locate this year than in prior years with the bite much more scattered. Lloyd went with a strategy that targeted big bluefish early in the year allowing him to rack up significant points and then focused on the striped bass. Dave benefitted from a solid network of anglers that freely and quietly shared just-in-time info on fishing conditions. Lloyd on the other hand, fished mostly alone. Regarding lure selection, Dave relied heavily on bucktails and Super Strike Purple Haze red eye needlefish.

While the results of the last year’s contest saw all categories increase slightly compared to 2014 levels, 2016 entries were relatively flat. The average striped bass points per club increased 4 percent from 2015 levels (862 versus 829) . Average bluefish points were down 9 percent over 2015 levels. The one exception was the weakfish category, which saw an 80 percent decrease from 2015 levels, with only eight fish entered in the NYSFC. It should be noted that the total number of fish caught was influenced by having one fewer surf club participating in 2016.

For the second year in a row the lack of a significant showing of sand eels on the North and South shores contributed to inconsistent overall results. The predominant bait was peanut and adult bunker, and if you could find fish on the bait you were usually rewarded with some nice sized fish. The lack of sand eels contributed to a fair amount of hit and miss fishing. It was not uncommon to find fish one day and none the next, so for many it was a guessing game of where the bait and fish would be on any given day. The summer months of July and August saw a significant (32.5 percent) decrease from 2015 with 213 total fish entered versus 316 in 2015. For the second year in a row Montauk was relatively unproductive in November with only two fish entered in the contest. The expectation was that the very large 2011 Chesapeake year class would continue to equate to good striped bass fishing in L.I. waters, and many anglers noted similar catches of 2011 year class stripers as the year before.

The numbers included in this report do not include a much-overlooked statistic — catch per unit effort or the amount of effort required to catch fish. To a man, the great majority of anglers queried reported needing to invest substantially more time on the water to produce the fish they catch compared to previous years. It is very difficult to quantify catch per unit effort since it is rarely tracked. The clubs in this contest probably represent most of the 10 percent of anglers who catch 90 percent of the fish. These are also very skillful anglers. Thus, as fish populations shrink, these anglers develop new approaches, fish in new locales, fish longer hours and make more trips because they own the skills to make the effort pay off, and because they are pushed by the competition. Meanwhile, the 90 percent of surf anglers who catch 10 percent of the fish become frustrated, make fewer trips, and may ultimately give up. The data gathered in the NYSFC that may or may not indicate a bigger catch in a given year does not necessarily mean that fishing is getting better because we cannot quantify catch per unit effort. The data does show how successful that effort was. Finally, in the surf, so much depends on the abundance and distribution of bait that the yearly catch may fluctuate wildly even when fish populations are expanding or contracting.

In order to qualify as a “Significant Fish” the NYSFC uses the following minimum weights: striped bass 20 pounds; bluefish 12 pounds; weakfish 8 pounds. In the striped bass category, the clubs totaled 226 fish weighing 20 pounds or better. This is a decrease of 14 percent from 2015 when the clubs totaled 262 fish at or above the 20-pound mark. In the bluefish category, the clubs entered 452 bluefish weighing at least 12 pounds. This represented a 21percent decrease from 2015 when the total had been 570 bluefish at or above 12 pounds. Both results ran counter to what I expected to see. There was much talk of bigger bluefish and striped bass being caught however the contest results showed decreases in both categories. 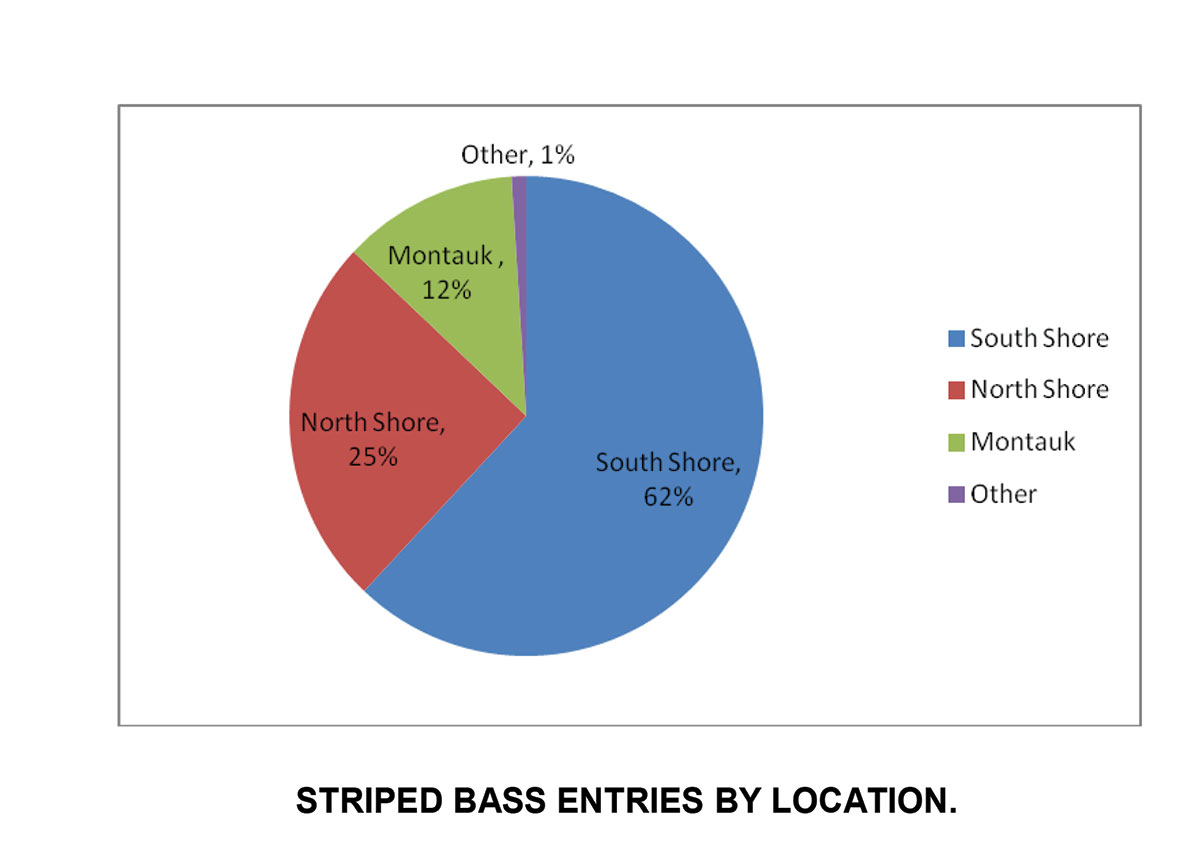 The number of bluefish caught in 2016 was 668 compared to 786 in 2014 representing a decrease of 15 percent. A review of the bluefish entered reveals the following: With the exception of April and August, bluefish catches were fairly uniform throughout the rest of the season. The most bluefish were posted in June, October and November. Fifty percent of the bluefish were caught on the south shore, 18 percent in Montauk and 32 percent on the north shore.

In 2016 there were only eight weakfish entered in the NYFC. The previous two years had shown slight improvements. However, the 2016 results show a fishery still in serious trouble. The weakfish fishery remains highly elusive to most Long Island surf anglers. It should be mentioned that the small number of weakfish entered is statistically unreliable and thus not useful in evaluating trends and conditions.

The first year for New York’s new striped bass harvest regulation of one fish of at least 28 inches for all members of the recreational sector and a 25 percent reduction from the Amendment 6 quotas for the commercial sector was 2015. The new regulations are in response to the harvest reductions mandated by the Atlantic Marine Fisheries Commission (ASMFC) and were determined by the various states up and down the coast.

You would think, given this data, that the Chesapeake Bay states would remain relatively quiet during the ASMFC Winter Meeting. Instead, these states began a discussion about easing the current restrictions in order to harvest more fish. The states other than the Chesapeake Bay states saw an overall reduction of 47 percent, almost twice the levels that they had targeted. The long-term effects of the harvest reductions remain to be seen.

The one thing that we can be certain of is that smart fishing and hard fishing will again be keys to successful surf fishing in 2017. With fish stocks down from historic levels, the schools of fish in our waters are spread out and not concentrated. If we see a lack of sand eels again in our waters, next year may prove to be another case of hit and miss fishing.

The one encouraging sign is the prevalence of peanut and adult bunker in our waters over the past two years. Last year saw large numbers of whales, seals and sharks not far from our shores. The resurgence of menhaden may be directly linked to the new limits on the harvest of menhaden put in place a few years back.

As Lloyd Kee and Dave Aquilino noted, there is no substitute for time on the water. With less fish in our waters, schools of fish will be widely disbursed. You need to spend time to locate and capitalize on productive patterns and windows. The 2011 class of striped bass should appear in fairly large numbers in our waters and weigh between 7 and 12 pounds.

You can expect that we will see a similar showing of menhaden in 2017 so having strategies for taking advantage of this bait would be wise. While it is incredibly important to know the waters in your area, it remains important to have several fall-back locations in the event your home waters are not productive or accessible. The past few years have shown that you cannot rely on the Montauk fall run. Finally, you must fish smart, focusing on the more favorable moon tides, wind conditions, bait patterns, etc.