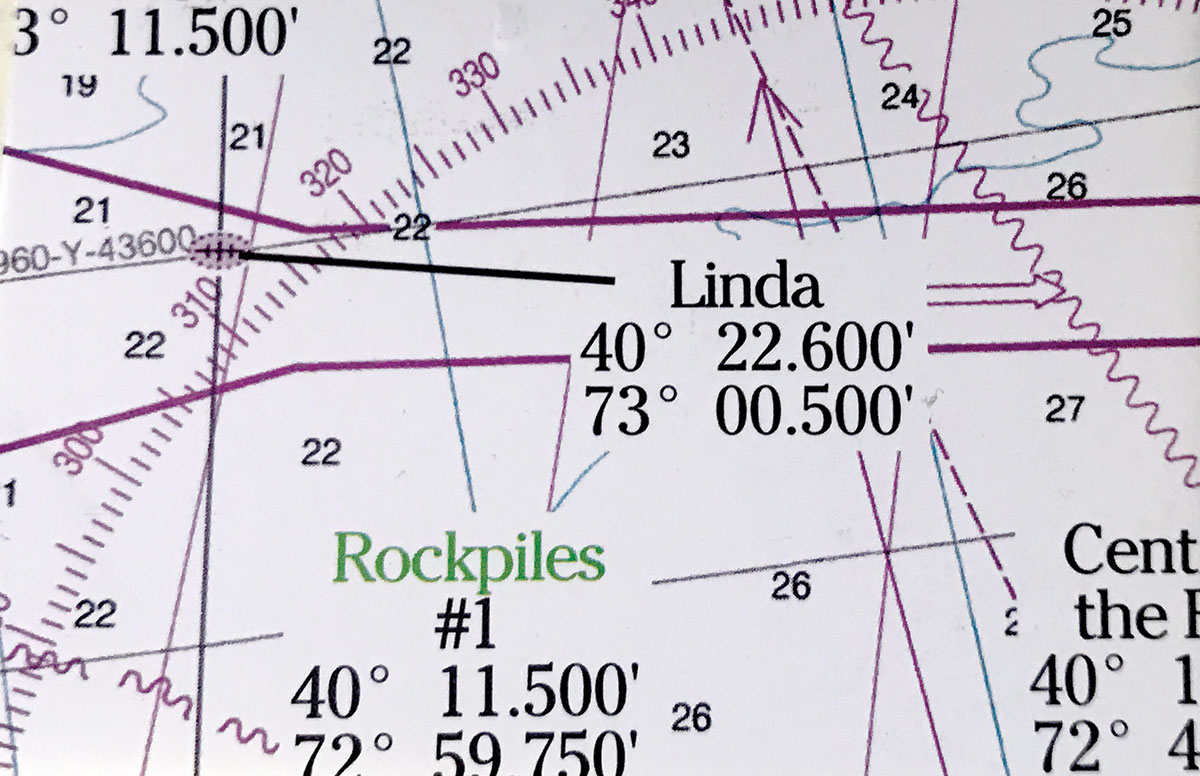 A chunk of bottom that remains a mystery lying 20 miles out of Fire Island Inlet has become known as the Linda wreck (N 40.22.524/W 073.00325) which sits on a clean piece of sandy bottom, situated upright in 135 to 140 feet of water. The bow of the Linda wreck (a wooden schooner) is relatively intact. Her bowsprit is broken off and sits in the sand just under the nose of her bow, which sits pointing 300 degrees northwest. The bowsprit is also tangled and almost completely covered in a dragger’s lost fish net. Her large fluted anchor is still mounted into position on her port side. Just aft of her bow is the schooner’s large winch, once used to raise her heavy anchor. The wreck’s sides are intact and stand a good 8 feet tal,l but her stern section is broken down low lying and scattered. The interior decking collapsed exposing her cargo of coal. Off the starboard side is a debris field, possibly the remains of her decking or deck house. One of her masts is lying in the sand off her port side. The visibility of the wreck usually exceeds 60 feet due to the clear and clean water of the area she rests in. Divers who explore this pile of unidentified schooner find plenty of big 2- to 5-pound lobsters seeking refuge among the stringers as well as many Dead Eyes for the divers’ artifact pleasures.

For fishermen, the Linda is a year round playground. However keep in mind this piece of real estate is a far run from home. Therefore it is ever so imperative to make sure seas are navigable and forecast to remain as such for at least a couple of days. This stands especially true to all craft owners with vessels under 32 feet.

Fishwise this wreck holds a variety of life. Cod, ling and sea bass are the main draw most of the year, however porgies, blackfish, flounder, sea ravens and cunners also reside here when water temps are just at their liking. With the abundance of life residing at this oasis throughout the year, July through November sees the bluefish drawn to the wreck for some relatively easy picking. Unbeknownst to the insatiable choppers, it’s payback time for terrorizing the colony as sharks, and some pretty large ones at that, zero in on the blues for quite a blood bath.

Savvy shark fishermen looking for that tournament winner or trophy mount will find an array of shark species roaming within a mile radius of the wreck. While blue dogs plague the area during the month of June, big tiger, dusky, thresher and mako sharks patrol the waters during July and August in search of one of their favorite entrees in the way of big bluefish.

While there are plenty of wrecks a lot closer to home that produce fishing as good as the Linda, it is a worthwhile wreck for anyone looking to tackle some pretty hefty sharks that could easily bring you back to the dock with a shark tournament winner.