Call it one of those, “here, hold my drink” moments, but the genesis of The Fisherman’s satellite tagging efforts on striped bass in the Northeast was little more than one friend telling a couple of others, “hey y’all, watch this!”

Flash back to the fall of 2018 as The Fisherman’s owner/publisher Mike Caruso is sitting in a Gray FishTag Research advisor’s meeting in Florida while the non-profit organization’s scientific crew summarizes their satellite tagging efforts on swordfish, marlin and roosterfish around the globe.  As a member of the Gray FishTag Research advisory board myself, I think the best way to visualize this scene is to picture a classroom – not a virtual one mind you, but real life, like in the olden days of readin’ writin’ and ‘rithmetic.  As most students listen intently to the lesson taking extensive notes, three hooligans sit side-by-side at their desks, chattering amongst themselves.  That would be Mike, sitting beside Wicked Tuna’s Dave Marciano, and Paul Michele, a longtime industry pro who has worked for the likes of Navionics, Yo-Zuri, Band of Anglers and others.

While Gray’s president Bill Dobbelaer was at the head of the class talking about the incredible research capabilities of satellite tags in big game, Mike, Dave and Paul – all Striper Coast natives mind you – were having their own side conversation about their own favorite fish.  Luckily, professor Dobbelaer himself is also a native nor’easter who grew up on Long Island, so rather than expelling the rabble-rousers he embraced the question, “so what would happen if we stuck one of these things in a striped bass?”

Three years and seven sat-tagged striped bass later, we’re still trying to wrap our collective heads around what we’re learning, while being schooled by the fish on an annual basis. 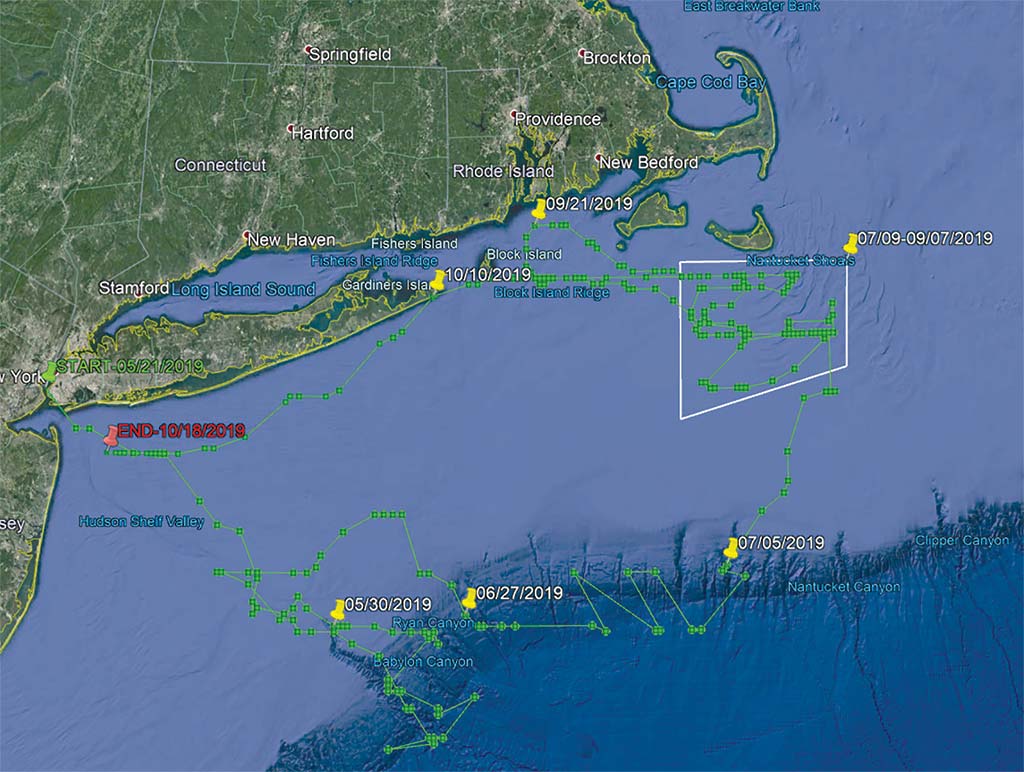 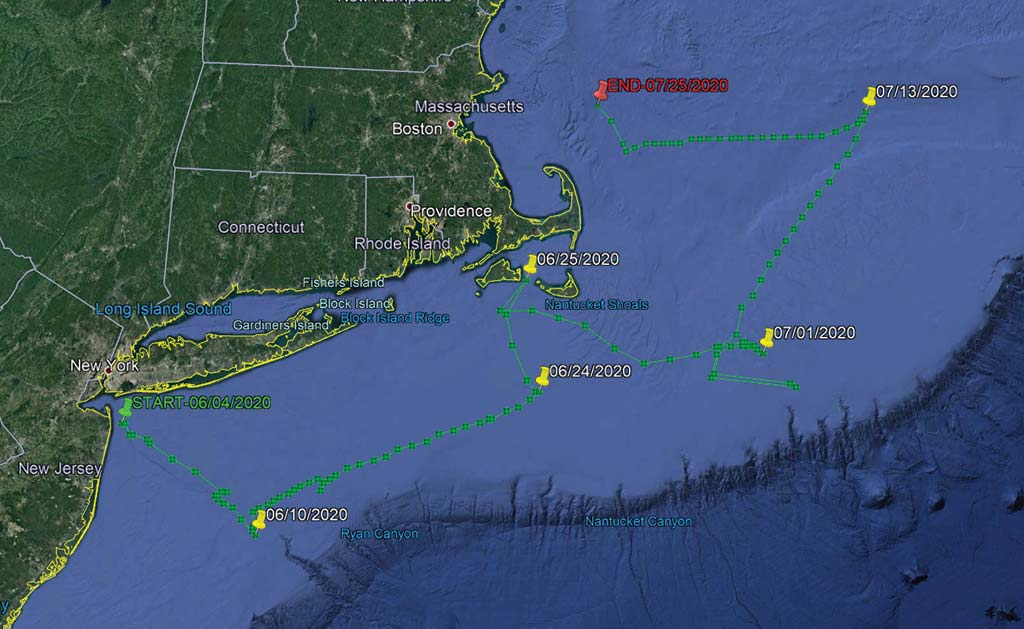 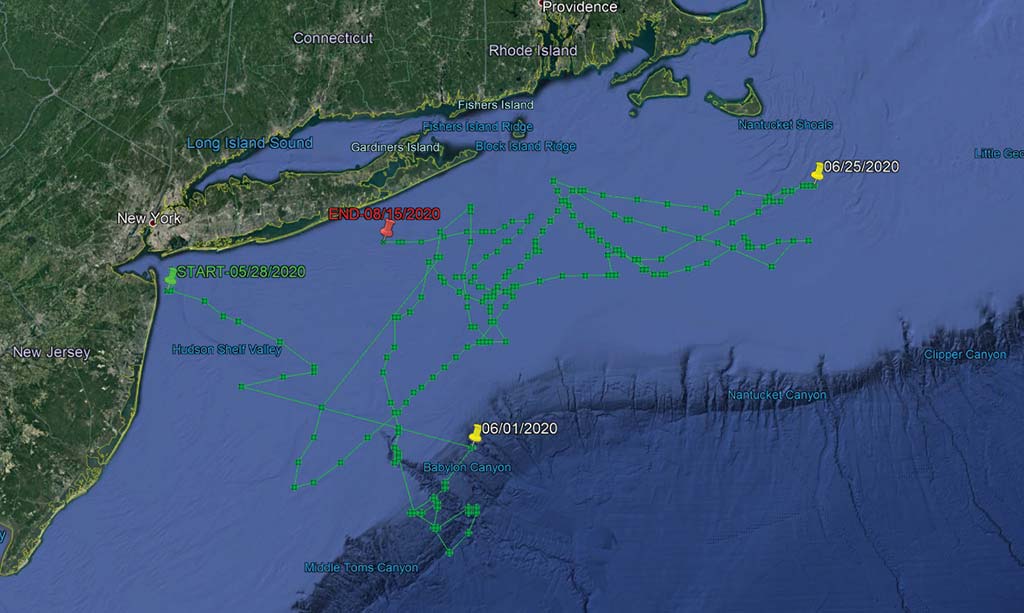 In May of 2019, Dobbelaer and his team from Gray FishTag Research brought a pair of high-tech MiniPSAT devices up to New York City.  Built by Wildlife Computers exclusively for bigger fish, these MiniPSAT units are designed to track the large-scale movements and behavior of marine animals that do not spend enough time at the surface to allow the use of real-time Argos satellite tags (think OCEARCH).

Sensor data is collected during deployment and archived in onboard memory inside each tag, collecting hourly temperature, pressure, and light data while attached to the fish. Once the tag pops off at a pre-programmed date, it floats to the surface where it begins to relay daily summaries of the stored data via Argos Satellites back to Gray FishTag Research.  Tracking patterns of the marine animal – in this case, big striped bass – are generated using the light data and ultimately plotted on marine charts.

The Northeast Striped Bass Study launched aboard two boats, Rocket Charters out of lower Manhattan, and Fin Chasers coming in from Highlands, NJ.  Our first tagged subjects included a 34-inch bass named Liberty and a 42-inch striper named Freedom.  Admittedly, we were going to name a fish Hudson in honor of the spawning class of stripers we were hoping to tag, but fishing in the shadow of Lady Liberty and returning to offload our team at North Cove Marina next to the Freedom Towers, made the new name a no-brainer.

The tags were programmed to release on October 21, so we all returned to our daily lives after deployment and began the waiting game.  Understand of course that when researchers tag those big white sharks that pop up in local headlines every summer, real-time Argos satellite tags “ping” every time the shark is swimming along the surface.  Our tagged stripers are tracked for as long as that MiniPSAT device stays attached; once it hits the air along the surface, a battery keeps the connection to the Argos satellite for about a week.  During that time the satellite will relay data back to Gray FishTag Research, though getting the physical tags returned (a needle in a haystack) ideally provides researchers with a virtual Easter egg to unlock all of the data.

Unbelievable as it may sound, both of those first tags were found by beachcombers, Liberty’s coming up along the Massachusetts coast at Sagamore Beach during the summer, while Freedom’s was found in the sand at Asbury Park later in the fall.

After a successful first year, we had grand plans for year number two.  An incredible collection of sponsors hopped aboard to support the Northeast Striped Bass Study, major manufacturers, state and national organizations and fishing clubs, and hundreds of Fisherman readers contributing to the effort.  While we started 2020 with hopes of deploying six or more MiniPSAT devices, the global COVID-19 pandemic left us with just three and nearly sank the study.

However, we were able to return with three boats in 2020, Capt. Wags’ Fin Chaser, Chuck Many’s Tyman, and Howard Owens aboard his 26-foot Scout, a private boat.  Due to travel restrictions our Gray FishTag Research crew was forced to remain in Florida, but keeping with the social distancing rules of the day we hit the ground running again last May.  Regrettably, the bite was a bit off along Lady Liberty by that time, but we still found a pair of incredible candidates off Sandy Hook in New Jersey to carry the MiniPSAT, 46-inchers we aptly named Cora and Rona.

A third tag was saved for the July Fourth weekend as The Fisherman’s Fred Golofaro joined Caruso aboard Capt. Savio Mizzi’s Fishhooker Charters out of Montauk, NY.  “We were looking for a fish over 45 inches,” Fred said later after catching, tagging and releasing a 46-inch monster out around Pollock Rip.  In honor of the holiday weekend, our team named the big girl Independence which became the fifth striped bass since 2019 to carry a Gray FishTag Research satellite tracking device.

Actually, Liberty, Freedom, Cora, Rona and Independence would be the first five stripers ever to carry around MiniPSAT devices for an extended period of time to track migration patterns.

With the pandemic shrinking in the rearview mirror, the 2021 Northeast Striped Bass Study was planned for two days prior to the full moon of May 26th. Using a total of six boats with some of the national study sponsors onboard for the day including Van Staal, Caterpillar, AFW/HI Seas, Seaguar, Tsunami and the Fisheries Conservation Trust, folks came in from points far and wide.  Of course, some not present for the day, like those from Navionics, will have another role in a few months when the time comes to track our tagged specimens.

Meeting for a shotgun start at Bahr’s Landing in Highlands.  In addition to our prior year’s boats and skippers, study sponsor Dave Glassberg gathered a team aboard his Critter Catcher, Capt. Fletcher Chayes offered up his Two River Charters, and Capt. Hans Kaspersetz of the Sheri Berri departed from Bahr’s with teams of anglers.  After two weeks of mostly windless, storm-free weather, our May 24th launch was met with stiff E/NE winds and choppy seas; another minor obstacle, certainly not as insurmountable as a global pandemic. 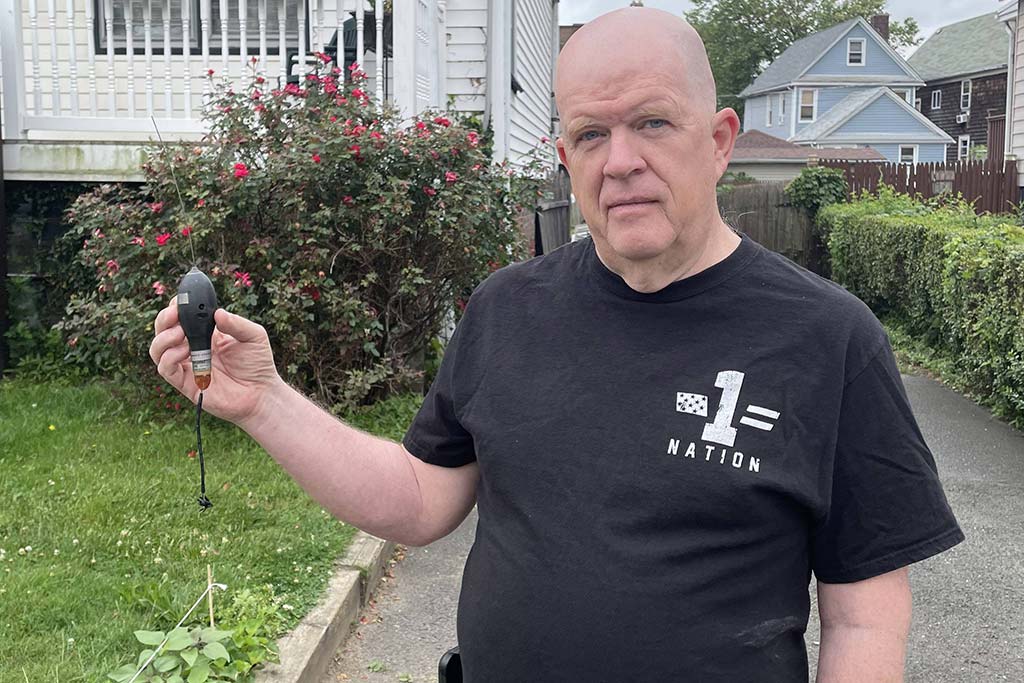 Four boats hit the Raritan to compete in a spaghetti tagging contest to see which crew could put the most Gray streamer tags into stripers; Capt. Hans’ crew finished off with 26 tags deployed as close to a hundred stripers were ultimately fitted with green tags on the day.  Meanwhile, both Fin Chasers and Tyman crews pushed outside into the slop, each with a MiniPSAT device.  Before the tide had turned, a 42-inch fish was fitted with a satellite tag aboard Wags’ boat, and a 44-incher for team Many.

Our still nameless pair of 2021 Northeast Striped Bass Study (see What’s In A Name) fish are currently somewhere out along the Striper Coast, being tracked as they swim by the MiniPSAT device attached to their flanks, collecting temperature, pressure, and light data along their travels.  While sitting down over a celebratory dinner spinning tales from the day’s fishing, the question arose as to what those two fish would do and how far they’d actually travel.  When the same question was posed back in 2019, the team’s general assumption was that our tagged stripers would leave the lower Hudson, travel up along the inshore waters of Long Island before heading up and into Rhode Island and Massachusetts state waters.  But that’s what happens when we assume.

In the first two years, our five tagged fish took extraordinary journeys to the offshore grounds, venturing through the Northeast canyons and tuna grounds, while all ultimately spending a significant amount of time in federal waters off New England including Nantucket Shoals and Stellwagen Bank.  Yes, there’s a slight degree of error when feeding information to the ARGOS satellite, but even more unbelievable is that we were able to physically retrieve three of the five tags in the study; after a widespread hunt along the Delaware Bay marshes in November of 2020, the tag formerly affixed to Independence was found by beachcombers in Lewes, DE.  The data in each of the MiniPSAT devices, those three that were recovered and the two from Cora/Rona fittingly enough not yet found, showed the same general offshore patterns.

Why did these jumbo striped bass swim against common logic and belief?  Are they the only ones?  Is there a scientific reason behind the offshore patterns, perhaps ocean currents or the prevalence of squid or sand eels miles away from the coast?  Could this be a truer migration for post-spawn striped bass?  At the end of the day, that’s not for us to answer.  Not at this time.  After all, it all started with a few hardcore Striper Coast anglers saying “hey y’all, watch this,” before sticking high-tech satellite tags into migratory post-spawn stripers, only because it hadn’t been done before.  We did again on May 24th, and we plan to do it a few more times later this season, hopefully off Montauk and perhaps up in Cape Cod Canal or the deeper waters off Gloucester, MA.

We expect the first satellite transmissions sometime late in September; where these stripers are now and where they eventually end up before the timed charge in the MiniPSAT releases the tag to the surface is just a shoulder shrug. It’s possible that the tags will deploy early, the fish could be harvested, perhaps be consumed by a larger predator; the fish could just die.  Anything is possible.  Thus far, the data contained in the previous tags would tell us if any of the previous snafus occurred. But they have not.

So we wait for tag returns while preparing for the next round of tagging sometime later this season; striper class is officially back in session! 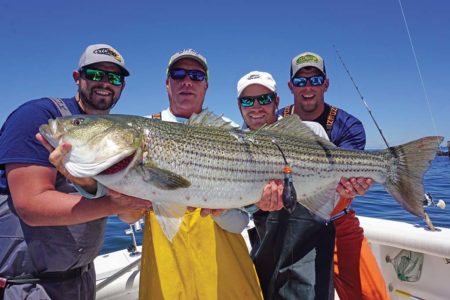 The premature emancipation of a satellite tagging device puts our Northeast Striped Bass Study team to the test. 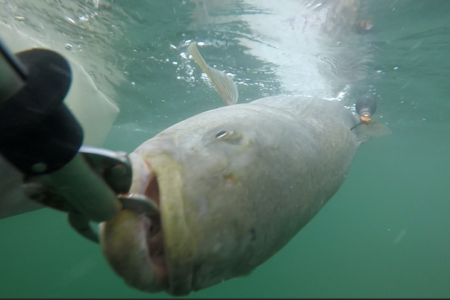 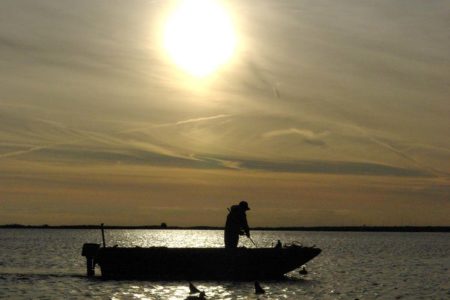