Rebuilt porgy stocks have provided lots of fun and good eating for several decades. Luckily, Long Island Sound has enjoyed its share of good porgy fishing from the Throgs Neck Bridge to Orient Point. The robust population has allowed anglers to employ varying techniques along with new locations, and tackle. It’s been a fishery for all anglers regardless of age or means, since they can be caught from shore, piers and docks, small boats in the shallows, and large boats in deep water.

I’ve never been a deep-water meat tackle kind of angler, although one can’t deny that porgies caught around deep-water reefs and wrecks are typically much bigger. When it comes to bottom fishing, I’ve been a shallow water, light tackle fisherman all my life. I admit that part of my preference for the shallows results from a profound tendency to get seasick on the ocean. However, I’ve never felt that I was being short-changed by fishing inshore, light, and shallow. Light tackle bottom fishing in shallow water does come with some frustrations, and maybe you’ve experienced them as I have. Nonetheless, over the years I’ve come up with a few ways to either get around or defeat these frustrations. I hope what follows helps you, too.

In Long Island Sound light tackle fans can chase multiple species in a variety of locations. This includes harbors, rocky points, as well as shallow shell bars and reefs, and never fish deeper than 30 feet. But Long Island Sound offers deep water porgy spots too, such as Execution Light, Huntington’s Triangle area, Mount Misery Shoals, the Middle Grounds, and many more featuring deeper water and strong currents. For anglers like me, strong tidal currents present a serious problem. Many of the deep spots require 6- to 8-ounces of lead because of depth alone. Add in current, and sinker weights become prohibitive for all but those with heavier gear.

So, as with all things angling, what we do and how we do it becomes a choice that’s motivated by habits, training, and personal preferences. That raises an important question for light tackle anglers. Does that mean we can’t fish in deeper water spots? Notice I said deeper not deep. That’s an important distinction. When one generally fishes on the bottom in less than 20-feet of water, a move to 35 feet is “deeper” but may not shut out a light tackle enthusiast. So, what are the adjustments we can make that would allow us to fish deeper and still use light tackle?

On the other hand, every angler, fresh or salt, knows that consistent success demands attention to a limited number of factors. Perhaps in saltwater, the most important of these is the tide, because saltwater fish have adapted to hide, feed, migrate, and spawn around the phases of the moon and hence the tides. Tides move bait, reduce the sizes of inshore areas significantly which concentrates bait, creates turbulence where predators can feed easily, and stacks bait against up-current edges to name a few scenarios.

In addition, during full and new moons, the moon’s gravity increases, pulling water toward the orb creating a bulge that in turn pulls water from the edges. The result is a bigger slope between the high tide bulge and the low tide trough. Since water will attempt to level this slope, current increases. The water movement is enhanced in Long Island Sound because tidal ranges can be as much as 10 feet compared to 4-1/2 to 5 feet on the south shore. True, there are usually currents in most places between the moons, but the strength is typically weaker. All of this falderal leads us to the following important point: light tackle anglers can fish deep water elevations between full and new moon periods, but not on the moons. The best days with the slowest currents can be identified on tide charts. I use SaltwaterTides.com because this site provides daily tidal ranges. Obviously, the greater the range the greater the current.

Now, there are limitations to the idea of fishing when current is lightest. The most important goes back to the reasons why tides are so crucial in the first place. In some places, the bite diminishes between the moons and improves around the moons, but there are also places where currents are so strong around moon tides that bottom fishing slows down. I also know places in shallow water (10 feet or less) where there is current and fish on the moons, but no current and no fish between the moons. I guess I’m trying to say that one size does not fit all, and although there may be general guidelines that help an angler get started, there is no substitute for learning about the areas nearby your home. There are variations of current, depth, moon effects, and fishiness, and through trial and error an angler can figure out nuances that result in consistent catches. Running hither and yon trying to identify trends from occasional visits is a very daunting process. Fish close to home and get better results.

One such nuance is the tide itself. That is, a current is not uniform from the beginning of tidal flow until the end, rather it builds, reaches a peak, and then dies away into slack. Typically, peak current occurs between the beginning of the second hour of the tide and lasts until the end of the fourth hour. Again, this is a guideline and not an absolute rule, but if an angler needs the strongest current in a weak current location, then mid-tide on a moon is the time when you should plan to be on site.

Places make a big difference, too. Consider Montauk where there is so much bottom structure, so many species of fish, and great fishing. How does this translate into selecting the right time at the right place? If you’re interested in diamond jigging stripers in June, for example, anglers seek the middle of an incoming tide off the lighthouse around the moons when currents are strongest, turbulence is at a peak, and bait more vulnerable to attack by gamefish. However, if it’s porgies, sea bass, and fluke you’re after, then avoid the big rips and fish other areas where current is consistent but weaker, or fish the heavy current areas only at the top or bottom of the tide when the current is weakest.

Try to see a fishing trip as a giant jigsaw puzzle with a lot of pieces. You know what it’s going to look like because you’ve seen the cover on the box the pieces came in, but the image cannot be completed unless you start someplace. Selecting, identifying, and placing the first piece of the puzzle is perhaps the most important step in finishing the puzzle. That piece dovetails with others that attach to others and so on until the image emerges. This is how I go about fishing, too. I know what I want and begin with one crucial data point and then build around it. Then, I gather together as many pieces of information as I can and I try to reason whether or not using those data points in a certain way is logical and will help me to succeed.

By process of elimination, I build my strategy. So, if I start with wanting to go porgy fishing, I know bigger fish are in deeper locations, I know current may either enhance or detract from the catch, I select the best time to go based on tide and current and then execute the plan by getting there on time, setting the anchor properly, and fishing hard.

For my son and I, fishing for porgies in deeper water in Smithtown Bay, means we want to set anchor on an elevation where there will be current, but not too much current. That means, for example, we select one of Crane’s Neck’s many elevations and rocky reefs between the moons when the current is slowest. Why? In addition to light sinkers, we also want to chum to attract a school of porgies to the boat. Chumming there on moon tides means you’re feeding fish a quarter of a mile behind the boat, and not attracting them to your baited hooks. Strong current means heavy sinkers and, as light tackle bottom fishermen, that simply won’t cut it!

Now, there are other deeper spots in the bay where there is almost no current between the moons, but some on the moons, and we will fish these spots because the current is strong off Crane’s Neck. It is my belief, regardless of the species you seek, that there is always a productive spot to fish regardless of the phase of the moon, or resulting weak or strong current.

Of course, the weather can throw a large monkey wrench into the logic, planning, and execution of the plan. Perhaps one of the worst of these is wind direction. Specifically, as an example, I refer to wind against tide. I have been amazed many times how even a 10 mile per hour breeze pushing against a moon tide in Long Island Sound can make setting up, holding position, and presenting baits properly a nightmare.

I should have learned this lesson years ago, but being a hardhead, I keep trying to find a solution to the problem. The hard-learned truth is, it’s better to stay home and wait for the wind to change direction. As useful as a big tidal range might be for certain angling situations, it is a horror show when faced with wind against tide. Of course, the option exists to fish the opposite tide when the wind and tide will be moving in the same direction. Ah, but there is a potential thorn here. There are some spots, some seasons, and some food chain patterns that create a situation where either the flood or the ebb tide is best. In this case, switching your outing to the opposite tide may not be productive.

If you don’t enjoy angling analysis, honing down the outing to a small window, and making quick decisive adjustments to your plans, then you have a limited set of choices if you are dedicated to fishing with light tackle. First, opt to go fishing anyway and hope for luck, second, hire a captain who may have better knowledge of the situation, or third, fish and learn a new area that may not be subject to bad conditions. 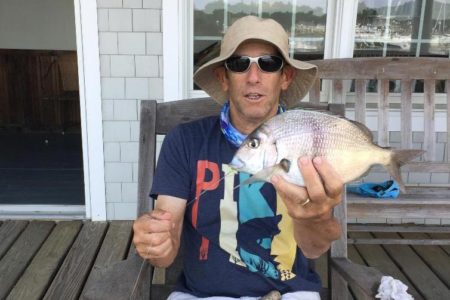