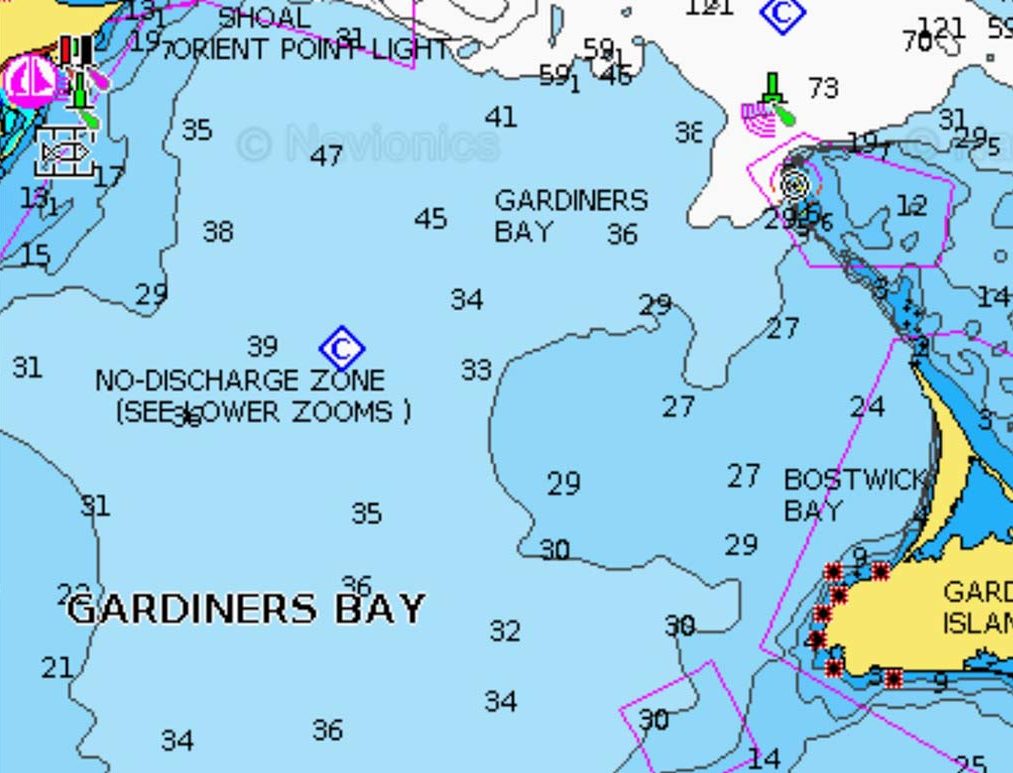 Gardiners Bay is a small arm of the Atlantic Ocean, approximately 10 miles long and 8 miles wide between the two forks at the eastern end of Long Island. It is bounded on its eastern end, where it connects to Block Island Sound and Gardiners Island, which is a small island that is 6 miles long and 3 miles wide. Gardiners Bay is part of the Peconic Bay Estuary, which is abundant with shellfish and crustaceans. Blue claw crab, oysters, and hard-shell clams, scallops, and conch are also abundant throughout the area making this piece of water a fisherman’s paradise as the abundance of food attracts a myriad of bottom-dwelling groundfish, gamesters, and speedsters.

One of the many hotspots that surround Gardiners Island is located on the northern tip, which is known as the Ruins. The Ruins is separated from Gardiner’s Island by a mile-long rip line that at one time was a road to get to and from an old fort. Once the fort was abandoned, Uncle Sam designated the area for military target practice, which is why the old road is now a rip line.

Speaking with Ken Morse over at Tight Lines Inc. in Sag Harbor, the rip line consists mainly of broken up old rubble from the wartime practicing of the bombs and torpedo blasting, which lies in 3- to 20-feet of water. Ken emphasizes that this spot is a fly fisher’s and a topwater anglers paradise as the area will hold stripers, bluefish, fluke, albies, bonito, and even the rare tarpon during the summer months. There are some bottom dwellers here but if you are thinking about anchoring in this area think again. There’s plenty of live ammo just waiting for an excuse to make some noise and setting an anchor among the steel tubes may be the last thing you ever do. Ken says a true navigation map is a must as all the danger zones are clearly marked on the charts. Drifting over the rip line would be fine and poses no danger.

July through September the flats surrounding Gardiners Island hold a myriad of forage that attracts a slew of gamesters and speedsters, including Spanish mackerel and tarpon on the rare occasion. False albacore and green bonito are other speedsters included on the list with the best of the action occurring with both species during September and October. Joe Baggs Resin Jigs and Fat Cow’s Epoxy Jigs in olive, pink, and green are must-haves to catch the exotics.

Ken also mentioned there are plenty of other options all in sight of The Ruins. For fluke, Ken suggests fishing the deep water, preferably between 70 and 100 feet as that is where the squid are during the day, which most times the big fish are on them. The area around the Gong buoy north of the ruins holds good populations of fluke during July and August. The key here is to mark bait close to the bottom and fish below the pods.

Ken says if it’s big porgies and sea bass that you desire, head for the rocky lairs in 60 to 80 feet of water southeast of The Ruins. Once again, a quality navigation chart will point out the rocky areas. As for tides, Ken feels that the outgoing will produce better than incoming regardless of the species. Then of course there are exceptions, Ken adds.

As you can see, Gardiners Bay can be an interesting and productive area to fish. For further details on the countless hotspots that surround the island and all the local waters and for all your tackle and bait needs, head over to Tight Lines where Ken will get you on the fish.