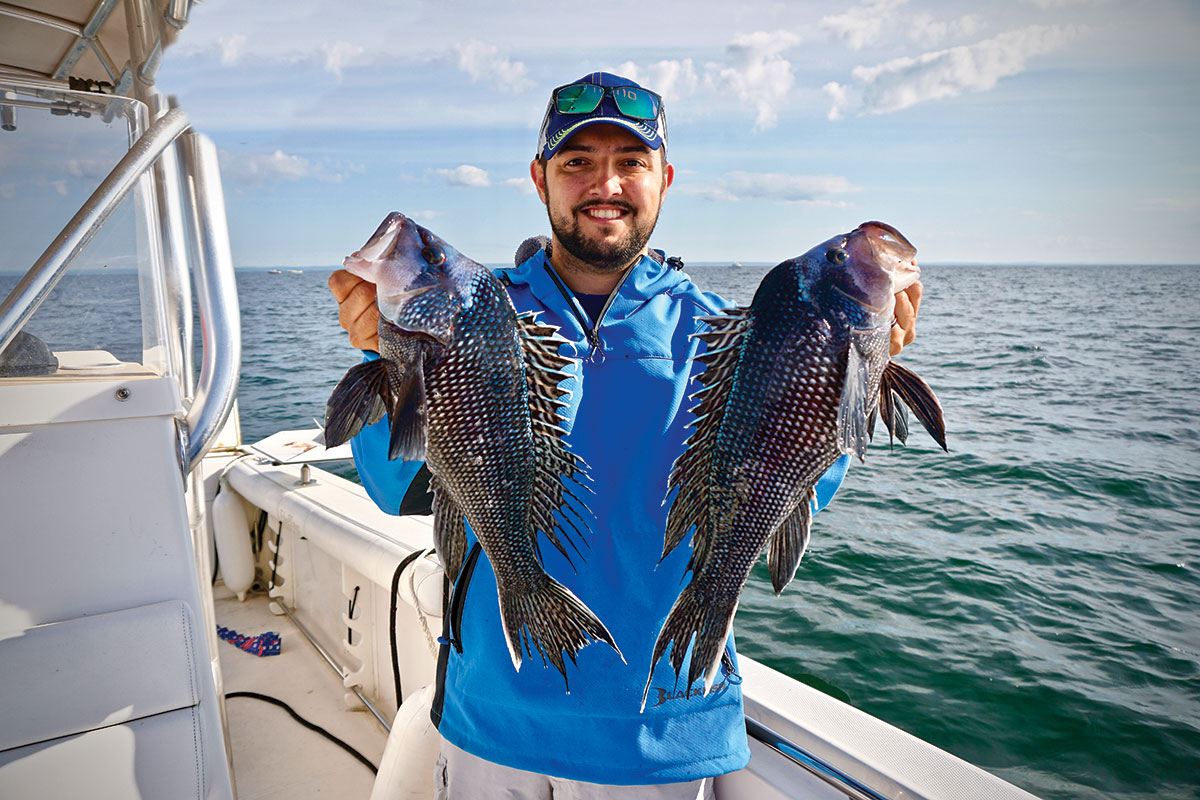 As sea bass season enters its later stages, a change of tactics is required to stay on top of the action.

It’s no secret that the black sea bass population has been booming in recent years here in the Northeast. Sea bass enter the shallower waters of the bays and Long Island Sound every spring, and the fishing has again been exceptional this season. The sea bass have been providing anglers with consistent action and excellent table fare. But once we enter late summer and fall, it can become frustrating for many saltwater anglers as they await the fall run of stripers, albies, and tautog seasons to begin. Many of the early-season bottom fishing spots are deserted and the fast-and-furious sea bass bite of the spring is often forgotten as many anglers seem to abandon sea bass and turn their focus elsewhere. This is a big mistake as these fish are just as easily fooled by anglers in late summer and fall as they are in the spring. Those spring and early-summer season spots may not be yielding fish as they were just weeks before, but there are other spots, often nearby, that are stacked up with quality sea bass.

It is important to understand the tendencies of black sea bass to better know where you can find them throughout different seasons. In the spring, as water temperatures rise, these fish move into “shallower” inshore waters to spawn. But, as summer progresses, they move off their shallow stomping grounds and begin to move onto deep water wrecks and structure. As water temperatures cool in the late fall/winter they move offshore and remain there until the spring.

In the spring and early summer, you will rarely find sea bass in more than 70 or 80 feet of water, and more often than not, the best fishing will be in much shallower water. As late summer approaches, and these shallower spots get picked over and it is time to search ocean reefs and wrecks in deeper water. Inshore areas like Long Island Sound may require you to seek depths ranging from 90 to 130 feet of water during the late season months. I try to stay away from the big fleets of boats and target any type of structure I can find nearby. This is especially important in the late summer where the popular spots get picked over after heavy pressure all season long.

Even though these fish are considered a bottom fish, on a few occasions I have run across birds working over a pod of bait at the surface being chased by hungry sea bass. These fish are so aggressive that they will hit lures and baits at all depths of the water column. Sea bass will “hold” to almost any structure stretching from the Jersey Shore up to southern Massachusetts. This gives anglers many options for productive spots and gives them the opportunity to find their own sea bass hotspot. Studying your charts and checking your depthfinder will also give you a better understanding of the habitat favored by sea bass and will have you catching more fish in no time. Different types of structure will hold fish better than others. Dedicating time to finding good structure and quality sea bass habitat, as well as learning and keeping notes concerning the spots you fish successfully, will result in better fishing on future trips.

As an example, one late-summer morning I was drifting eels over one of my favorite striper locations in Long Island Sound when I got a decent thump. After a short battle, I was surprised to find a jumbo sea bass tugging on the other end. This area consisted of a series of humps where I often find a quality striper bite, but on this late-summer day, the bottom part of my fishfinder was loaded with sea bass. After returning to this area during late summer and fall, it became a go-to location for early-season stripers and now, for late-season sea bass. These spots are sometimes found when you least expect it, but exploring different wrecks and structure will have you adding fresh sea bass waypoints to your fishfinder in no time.

Earlier in the season when fishing shallower structure, light tackle is the way to go as sea bass are a blast to catch on these lighter setups. As summer wears on and fish move deeper, these light setups are just not enough. During the late season, especially during the fall, I often find myself fishing in excess of 100 feet of water. When fishing at these depths with potentially strong current, you will require a significant amount of weight to hold bottom. In order to have a better feel of your presentation and the bite, a stouter rod is required than the one used in the spring. Weather in the late summer and fall often becomes less predictable and more severe, requiring anglers to bump up their tackle to a rod that is a bit stouter than the light to medium/light outfits used earlier in the season. These medium to medium heavy rods will still allow you to detect a light bite, but also allow you to fish heavier payloads in order to get down to the bottom in a stiff wind or with strong current in deep water.

When it comes to the choice of line, I almost exclusively fish a braided main line with a fluorocarbon leader. Braided line has very little stretch, which makes it a great choice for most bottom fishing applications, allowing you to feel the bite better and drive the hook into the fish’s mouth with greater success. Fluorocarbon is one of the most popular leader materials when bottom fishing. This type of line has very low visibility, which will help you to get more fish to bite, and catch fish that may otherwise be line shy and finicky.

There are many different rigs and methods of sea bass fishing. When visiting your local tackle shop, you will find pre-made sea bass rigs often consisting of multiple hooks. These rig usually are assembled with the hooks tied one on top of the other. A sinker is attached below the hooks keeping the rig in contact with the bottom while fishing. This rig is often fished with bait on each hook. However, in recent years artificial soft baits are becoming more and more popular for this style of fishing. When sea bass are feeding aggressively, it is not uncommon for anglers to double-up with multiple fish on a single rig. Sea bass rigs can also be made at home, where anglers are able to experiment with hook size and variations of colors, beads, and blades adding to the appeal of these rigs. Diamond jigs, bucktails, and epoxy jigs have also become popular methods of catching sea bass. These jigs can be tipped with live bait, artificial baits, or cast without bait at all. This method of bottom fishing has become very popular at slack tide or with very little tide movement where a lighter jig can be fished more easily. When sea bass are feeding further up the water column these types of baits become very useful tools for anglers as they can be fished in a variety of different ways to entice fish to bite.

Sea bass are a fascinating species that are always changing and keeping anglers on their toes. I spend a lot of time on the water and week to week I seem to notice changes in these fish as they move from location to location.

Some trips it seems like a totally new wave of fish moves into an area that are of a different size and temperament than weeks, or even days before. I have found that sea bass are usually found in groups of fish that are of similar size. Because these fish are constantly changing their environments and hunting for food, it is important for anglers to change and adapt with them in order to stay on the structure that is holding the groups of larger sized fish. When a spot is on fire, it will often stay that way for a short while, but then will inevitably, get picked over and sea bass will move on to other structure and it will be time for anglers to do some searching for the next hot bite.