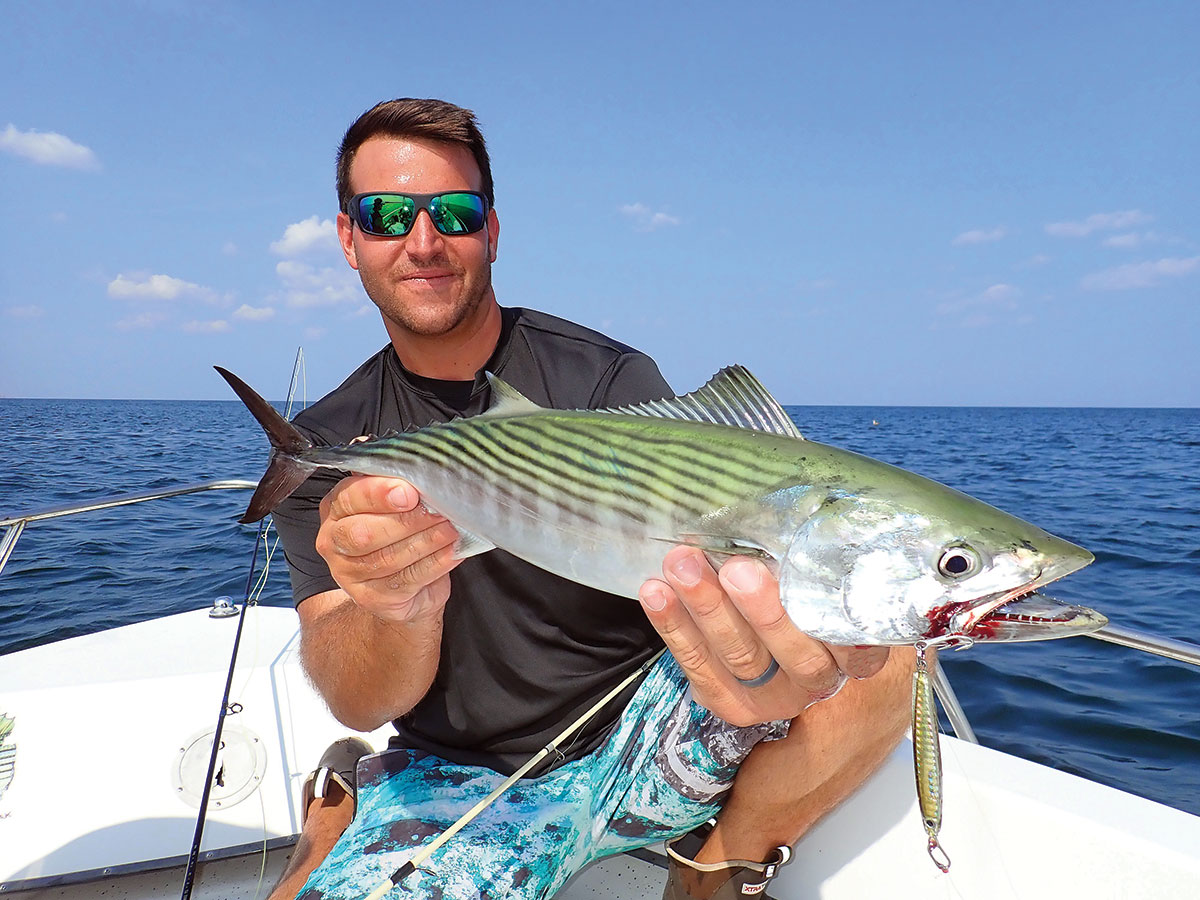 The Spanish word for beautiful, bonito in the Northeast also means opportunity.

The summer of 2018 broke new bonito boundaries for much of our region.  On my home turf at the Jersey Shore, Atlantic bonito schools were so thick that it could be considered historic! There was only one time in my life I had hooked a bonito in the Jersey surf and that was 2006. The catch was such an anomaly I considered it strange and one of a kind.

Fast forward to August 15, 2018 and you wouldn’t have believed what was going on. Cast after cast, I landed over 30 bonito in the 1- to 2-pound range from the Manasquan surf. That 2018 bonito run wasn’t just one for the ages, but one that could possibly define the beginning of an age; as of June 21, 2019 the first waves of bonito have already crashed the Jersey surf at Sandy Hook and have been trolled just 3 miles off the coast.

While northern areas such as Long Island Sound, Block Island and Martha’s Vineyard see bonito schools with frequency, Jersey is surprised by the recent invasion; it could also be an early indication of just how good it could get for our Northeast regional anglers this summer. Mixed in with the earliest reports of bonito are Spanish macks, king mackerel, nearshore mahi, bar jacks and other assorted tropical beasties we just are not used to seeing on a daily basis. But for now, let’s put a bullseye on bonito.

Atlantic bonito (Sarda sarda), are green bonito, not bonitA (emphasis on the A) like anglers refer to false albacore (Euthynnus alletteratus) south of the border.  True bonito are identified by black diagonal lines on the greenish-silver flanks, small conical teeth, and a bullet mackerel type of shape. While bonito are usually found offshore, we’re going to concentrate on the welcomed influx of coastal, sound and surf fishing opportunity and tactics.

Generally, waters from 65 to 80 degrees will hold bones to an area. Habits to note are that they are a pelagic species and seem to come in with clean green/blue water, many times during offshore winds June through October. Bonito schools hone in on fast moving baitfish, travel in schools, and will feed in blitzing conditions spraying baitfish, vaulting out of the water like flying torpedoes. Summertime prey includes sand eels, bay anchovies, spearing, and peanut bunker.

As fast feeders, bonito will pursue any flashy, feathery doppelgangers of sand eels, spearing, bay anchovies and peanut bunker. Commonly trolled, faster speeds of 5 to 7 knots will gain attention from the speedsters. A four-rod trolling spread works just fine with two out of the port and starboard gunwales and two on the flat lines off the stern.

Troll around inshore reefs and rockpiles, outside of inlets and breachways, or just outside the breaking waves of the surf, periodically making turns to let the spread drop a little bit in the water column. Many times bones will hit when the spread flutters down on the drop. Here’s my log entry from August 16, 2018:  “Trolled Williamson 3-inch feathers in pink blue, blue green and Clark Spoons and Deadly Dicks 5 to 7 knots look for breaking schools. Immediately broke inlet and it was the most insane Bonito fishing I have ever seen! Busting everywhere from 8 inches long to 4 pounds. Axel Carlson reef was also just absolutely loaded.”

When bones are congregating and pouncing on trolled lures consistently, hit the next stage of fun and break out the spinning and fly tackle.

For cast and blast action, set up with a medium power, moderate to fast action spinning rod like a Shimano Terramar Inshore 7-foot MS70M matched with a Shimano Stradic 5000 class reel, spooled with 20-pound braided line, then a uni to uni knot top shot of 5 feet of 20-pound Seaguar fluorocarbon line. Lures can be dependent upon what bait is around and where the bonito are hanging. If pitching quickly around lobster pot buoys, toss small 1/4- to 1/2-ounce bucktails tipped with a bubble gum pink or rainbow trout Fin-S fish or small DOA CAL paddletail.

If search casting and needing to wing it far out to the school, then #2 Deadly Dicks, Williamson Gomoku 1.4-ounce jigs, or 1-ounce crippled Herring jigs work in pink, silver and blue colorings. Cast out, let the metal sink with a five count, then rip the lure back to you as fast as you can reel. Flyrodding is also a viable option if you can drift into a school.

When spying a school of busting bonito, try to get ahead of the school, circling around the outskirts, and position yourself a hundred yards away, then cut the engines so you drift into the school or the school drifts to you so as not to spook the fish. When close enough to cast, whip a fly out and double hand strip back to you as fast as possible. Use 8- to 9-weight rods with intermediate or sinking lines and flies such as Deceivers, Clouser Deep Minnows, and Pop Fleyes.

Freelining fresh baits in a chum slick is a thrilling way to hook up with bonito. The first order of business is to scope out a nice ledge that has a pretty good drop on it and proceed to anchor on the upside of the tide. Start the slick by sending out handfuls of fresh spearing or chunks of pilchards or peanut bunker behind the boat.  As the chunk baits flitter down, the flash and scent will attract pelagics up the ridge and into the area to feed. A light set up with 3000 or 4000 series reel spooled with 12-pound monofilament line matched with a medium action 7-foot spinning rod will fit the bill.

Fluorocarbon leader is a must with the line shy speed demons, and a free line rig consists of a 50-pound Spro barrel swivel to prevent the bait from spinning, then 30-inch section of 20-pound Seaguar fluorocarbon leader and a No. 1 Gamakatsu live-bait hook on a weightless flat line. Hiding the hook is of paramount importance. With the point of the hook, a spearing or peanut bunker bait can be poked into the mouth, pushed out the gills and hooked back in right behind the gill plate or just underneath the backbone, almost like a butterfish is hooked when chunking for tuna. Drop the bait in the water, open the bail and strip two pulls of line off the reel, allowing the bait to flow down the water column freely and without tension.

Baits are sent back in with the slick, either with no weight or with a BB split shot 3 feet up from the hook bait. An open spool and completely slack line allows the bait to sink at the same rate as the tossed chum baits. Once a pickup occurs, flip the bail and engage the reel, lifting back on the rod gently as the torrid speed of the takeoff will usually set the hook. Live baits like peanut bunker and killies hooked through the mouths can be pitched back to the speed demons when they are in a frenzy. Chumming up speedsters is most rewarding on light tackle, with wild visual strikes, sometimes only yards from the stern of the boat.

Besting bonito from the beach is definitely a feather in the surfster’s cap. Early morning hours from sunup to around 10 a.m. generally offer up the best shots at fish, but they will hit through the afternoon. It’s more of a blindcasting or visual game here. Keep your eyes peeled for visual indications of fish breaking on baitfish outside the breakers or focus your efforts off the jetty tips and pockets where bones will stage in the swirly currents pouncing on disoriented baitfish schools pouring in and out with the tides. Reach from the beach with an 8-foot medium to heavy rod with a moderate action such as a St. Croix Tidemaster TIS76MH matched with a 4000 or 5000 series reel. It must give a little; bonito are quick to turn and burn drags, vibrating relentlessly where a fast action rod may have no give and pull the hook.

Many times, the bones are “just outside” of the end of your casting range, so upping the rod to 8- or 9-foot may be necessary simply to reach the furthest cast. Concentrate on visual confirmation of bonito trapping bait schools around inlet pockets, as bones pin them against the rocks where they can more easily smother and gorge upon them. Keep a keen eye out for bones blasting baits just outside the sand bar over the breaking waves. Lures should be cast out then retrieved at a super-fast pace.

On October 17, 2018, the world changed in my bonito frame of reference. This was my particular log entry that day, pay attention to the conditions noted: “Heard bonito in the Manasquan suds, saw gulls dipping down on dead low bar at 8:15 a.m., made casts then saw bunch of splashes outside the outer bar, waded out but couldn’t reach them, just almost there. Casted to 9:30 with no hits, then saw bonito busting right in the wash at Gee Gee’s. Waded out and proceeded to catch seven bonito back to back on every cast as they sprayed peanut bunker, spearing and sand eels. Bonito blowing up everywhere. All bones were about 1 pound and hit a #4 deadly dick white silver. Water 66 degrees, winds offshore 1-foot, water clean and clear.”

Any way you slice it, there are plenty of ways to hook up with bones. The bonito bomb has already exploded in the region; it appears we could have another banner year.