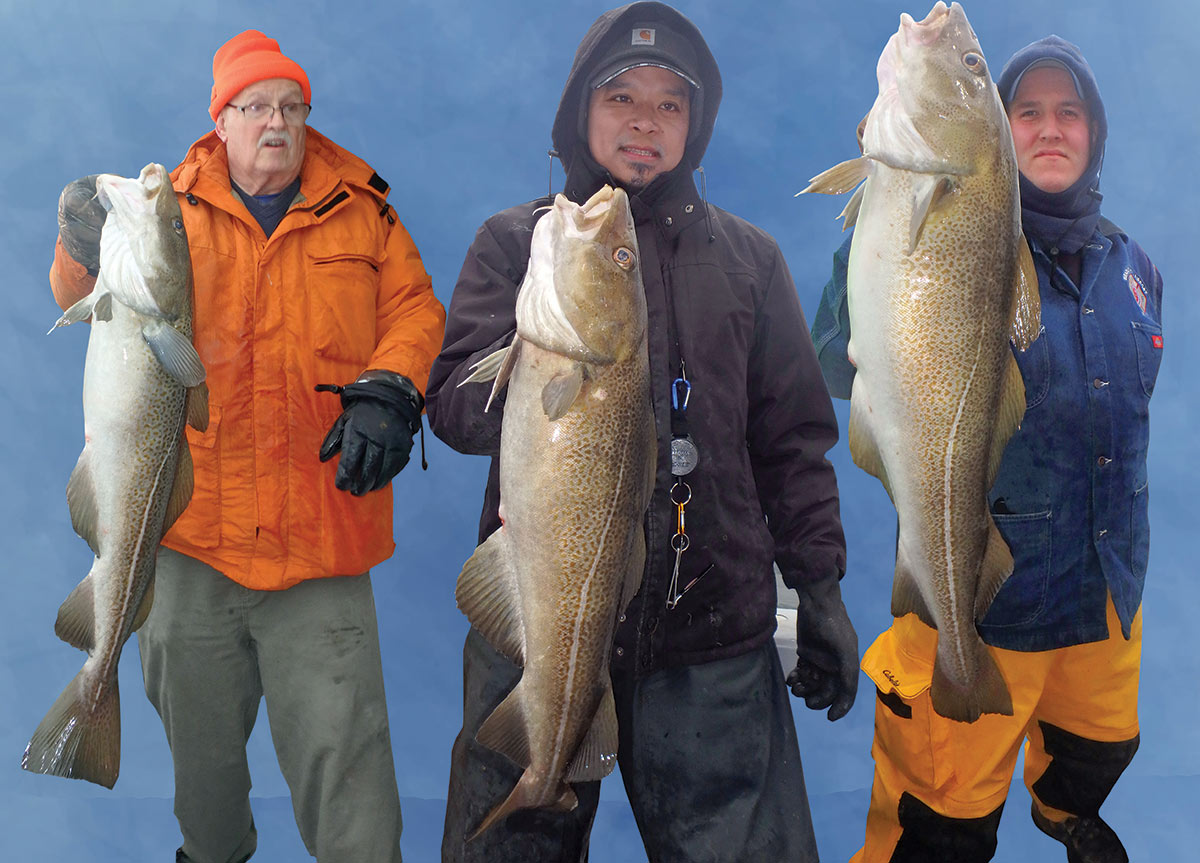 Cod fishing can be an unpredictable undertaking, especially during the winter months when weather can play havoc on sailing schedules and the fishing itself. When the fishing is good, there is no better cure for cabin fever, and space at the rails of party boats can be tough to come by. Whether you target cod out of the East End or one of several South Shore ports, until the end of the year you are likely to be fishing for a mixed bag of cod, sea bass and porgies. Both the bass and scup seasons run through the end of the year; both species have been exceptionally abundant in recent years; and they share the same grounds as cod, especially during November and December. These two species, especially sea bass, virtually ensure that you will go home with fish in the cooler should the cod fail to oblige.

Weather plays the biggest role in winter cod fishing, and for that reason, most anglers rely on the comfort and safety of party boats and the few charter boats that continue to accept charters during the winter months. While there are quite a few options prior to the New Year, most open and charter boats call it quits by the end of the year. The past couple of seasons have seen a decent start to the cod action south and east of Block Island with the numbers of cod mixing with sea bass and porgies increasing as the end of the year neared. Along the South Shore of the Island, it was a similar scenario with surprising numbers, along with the size of some of the fish, on some trips.

Some cod were even jigged inshore on open bottom by anglers targeting stripers and blues, but by far the best cod action was found aboard party boats running special offshore wreck trips out of Captree, Freeport, Point Lookout and Sheepshead Bay.

As January unfolded, it was the weather that became the biggest obstacle to scoring some cod. Most of the open and charter boats with winter sailing schedules hardly left the dock due to wind, cold and rough seas. The best advice for this season is to pay close attention to fishing reports and the boats’ Facebook pages, and respond to reports of good fishing as quickly as you can. Fishing declined rapidly last winter, with some boats cancelling out their sailing schedules after being frustrated by the weather and poor fishing. Some captains blamed unusually cold water temperatures for the lack of cod in February and March.

When you do get out, you’ll want to take advantage of every opportunity. How you rig and bait can make all the difference in the world whether you’re successful in your quest or you draw blanks. The basic two hook rig is popular with some captains and mates who emphasize how you bait up is most important. These veterans of the cod game prefer using just one half of a skimmer clam on a 5/0 Octopus or baitsaver hook, since over-baiting can cause your bait to spin.

Other cod sharpies swear by some window dressing. The addition of an 8- or 9-inch Jelly Worm or red, white or chartreuse twister tail to a clam baited hook was especially effective the last two seasons. You should also tote along some diamond jigs, since there will be times when the jigs outfish bait. Shimano’s Butterfly flat sided jig in green/silver and blue sardine, and hammer finished jigs sporting a twister tail or skirt on the hook have all taken their share of cod the past two years.

If you’re serious about putting some cod in the freezer this season, think about booking a charter in November or December, or boarding one of those long range open boat trips before the end of the year. That would allow you to take advantage of what has been the best fishing the past couple of seasons, and avoid being frustrated by the extreme weather conditions we have been experiencing from January through March.

With the closure of the cod fishery north of Cape Cod, all of the fall and winter New England fishing pressure is now focused squarely on the waters from Chatham to Block Island and on to the south. For better or (most likely) worse, this limits where a local boat can head to tangle with cod. Fortunately, the late-fall and early-winter fishery has been rather good the last few years with a solid bite on fish to 30 pounds taking place when the weather pattern allows for some regular sailing.

The first fall cod reports usually come in from anglers seeking blackfish on the deeper inshore rockpiles of Buzzards Bay, off Newport and off South County, RI. While there is little dedicated cod fishing taking place in these waters today, it wasn’t all that long ago that anglers throughout this range could just as easily fill the boat with cod as it was anything else. Specimens up to 50-plus pounds were even taken from shore, but unfortunately that fishery is little more than a memory these days. That said, it is not all that rare to find a rockpile in 50 to 60 feet of water with at least a few cod in residence. Maybe pack some salted clams on that next tog trip and see if anyone is home?

As fall progresses into early-winter, and while black sea bass season remains open, boats from Southern New England tend to stay closer to Block Island. As the inshore waters cool, the fishery slowly moves east towards spots like the Wind Mills, the East Grounds, Sharks Ledge and Coxes Ledge, just to name a few. These waters are all accessible by seaworthy private boaters, but be sure to keep an eye on the weather and let caution lead your way. It’s just as likely to limit-out on sea bass and porgies as it is cod on any of the humps, bumps and wrecks in this area, and with some really big choggies in the rockier spots, an excellent mixed-bag can easily be put together in short order. Don’t be surprised if you add a really big winter flounder, too, often referred to as “ocean flounder” by the for-hire fleet.

As noted, waters north of Cape Cod are off limits to cod fishing, but this doesn’t mean that anglers heading out from spots on Cape Cod are shut out of the fishery. Late-season tuna anglers regularly drop baits and jigs down deep as a way to pass the time between bluefin bites. Many of the tuna spots also hold cod, but the difference from the waters around Block is that it’s primarily a private boat and 6-pack boat fishery as few party boats make the run to these grounds.

This means that when you get in on a bite, you might be able to sustain it for a longer period of time since there are fewer boats working the same spots; it’s really only limited by how long Mother Nature strings together some fishable weather.

November and December at the Jersey Shore is primetime for black sea bass, with the charter and party boat fleet focusing efforts on the 15-fish per person bag and 13-inch size through the December 31 winter shutdown. Boats hitting the wrecks 20 to 30 miles off the Jersey Shore will find the biggest biscuits, but a few cod will be scored along the edges of those same 100- to 150-foot or more depths to add a little gravy to the day’s trips. But targeting cod in New Jersey really ain’t what it used to be.

“It’s hard to do any focusing on cod at this time,” said Capt. Joe Bogan who runs the Jamaica II out of Manasquan Inlet at Brielle. “Last year we didn’t have many cod mixed in with the sea bass but the year before we had a lot.” During the Jamaica II 12-hour trips out to the 30- to 40-mile range in 2016, Capt. Bogan said there might be 40 or 50 cod on every trip, but he called it “an up and down thing” with only a few per trip last season and an occasional 30-pounder.

Targeting Jersey cod is primarily relegated to the top half of the state, with catches on the inshore and offshore reef sites south of Manasquan Inlet more of a rare bycatch as opposed to even an occasional catch. Even from the northern ports, there are only a few captains with a history of snag logs and covert marks in their books leading the way for cod, but it’s primarily a spring thing. But as most would admit, push-button fishing through the use of modern electronics has given an edge.

“It’s very hard to keep a secret anymore,” said Capt. Ralph Leyrer of the Last Lady, a 41-foot walk around that holds up to 15 passengers out of Neptune on the Shark River who added he’d only had a couple of good cod fish trips this season. “Fishing pressure has a lot to do with it, and I’m hoping it’s cyclical,” said Capt. Leyer, adding “I still catch an occasional cod in the Mud Hole, and if you can get on a wreck that hasn’t been inundated with boats you can do pretty well.”

Leyrer grew up in Bay Shore on the South Shore of Long Island so he is familiar with a few of those perennial hot spots out east, while as member of the multi-generational fishing clan out of Manasquan, Bogan has a history of family logs to try new, old locations for prospecting. But to a T, both skippers agreed that spring and summer are better times for zeroing in on cod catches off the Jersey Shore.

“The real zeroing in on the cod is in the spring, unless you’re heading out 60 miles,” noted Capt. Bogan who said historic grounds like Cholera and wrecks to its south in 110 to 120 feet where the captains would fish for cod into January in years past just don’t produce like they once did. “It’s not like it used to be out at the Eastern Flats where we used to fish for them,” he said. “It seems that when we get really heavy blows in the fall, it riles things up and pushes things off to the west,” Bogan noted, adding, “If you get a couple of days of hard northeast, you might get a few more fish.” He called bait the key, saying years when cod are more active there are more sand eels around.

Gear-wise, for those looking to tangle with a cod or two, Capt. Leyrer recommends a high speed reel with 65-pound braid and 80-pound shock leader, though he might splice in 40-pound for the sinker when fishing around the sticky stuff. “As long as you have a good stiff rod that can handle a good 20-pound tautog, you can handle a 50-pound cod,” Leyrer said. “When you get that first hit, if you don’t get him out of the wreck first thing, I don’t care if you have a telephone pole, you’re not getting him back.”