Raritan Bay holds plenty of hot spots for the August run of doormats, but one that falls a little under the radar is the Chapel Hill Channel.

Phil Sciortino of the Tackle Box in Hazlet has fished the channel his whole life and said it’s an often forgotten if not virtually unknown (if that’s possible anymore) stretch of productive fluke water. “It’s kind of a channel that nobody knows about; many guys drift through it catching fish without knowing it’s an actual spot they are having luck with.”

The channel runs roughly 2 nautical miles from north to south, and extends from the front of the Navy Pier on the Jersey side of the bay up to the TC Buoy at West Bank Light on the New York side where it then runs into the Ambrose Channel. “Chapel Hill is a great summertime spot,” said Sciortino. “It runs about 50 to 60 feet at its deepest and is surrounded by water in the 20- to 30-foot range.”

“It’s got slower moving water than Ambrose and Sandy Hook channels, and though you won’t find as many stripers there, it’s flat out the best place for summer species like fluke, porgies, weakfish and blues,” he added. 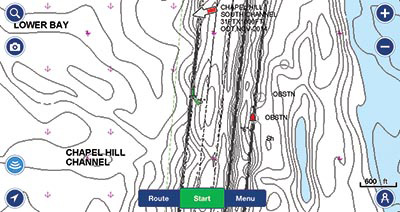 Fluke fishing runs hot during August where flatties hunker down in the 50- to 60-foot depths to feed up before making their eastern departure for the winter. Folks looking for doormats prefer deploying 2- to 4-ounce bucktails tipped with fluke belly or bluefish and mackerel strips, or simply drifting with killie and squid combos. A live peanut bunker is especially effective.

Buoy #11 is a particularly productive fluke spot as a huge 50-foot hole is found using your printed charts or onboard electronics. Sciortino also noted that weakfish are found deep in the Buoy #11 hole in the summer; a drifted sandworm or bunker can get you into a spiketooth, especially during the night or early morning hours.

“Probably the most surprising fishing in the channel is for porgies,” Sciortino said. “Buoys #4 and #6 have some rough patches of structure by them, as well as a few small wrecks around the area, and porgies hang there eating up clam bits or squid pieces sent down on hi-lo rigs with size #6 hooks. It’s a great place to take kids to fish as porgies in summer are non-stop rat-tat-tat hits.”

This month while many late season doormat hunters gravitate towards the more popular Ambrose Channel to find their final trophy fluke of the year, try and beat the pack by tucking in and fishing the oft-overlooked Chapel Hill Channel to shore up a limit of flatties.