A classic way to score summer stripers anytime the crabs are thick as fleas.

The year was 1973, and I had been encouraged by my college professor to try my hand at writing after doing some extra credit work for his class. Given the recommendation to “write about things you know,” I went with fishing.

In those days we spent a lot of time drifting sand fleas (aka, mole crabs, sand crabs) around the rocks at Indian River Inlet so that was the subject I chose. Once my epic was completed I sent it to Rip Cunningham at Salt Water Sportsman. He returned it saying it was too short and didn’t have any photos.

Shortly thereafter I met some guy named Pete Barrett who had just started a publication named The New Jersey Fisherman. Pete asked me if I had ever written anything. I told him about my experience with Salt Water Sportsman and he asked me to send him the story. I guess he liked the article because he bought it and hired me to write fishing reports for Delaware, something I have been doing ever since. Recently, Jim Hutchinson, Jr. asked me to do another story on drifting sand fleas at Indian River Inlet so I guess history does repeat itself. 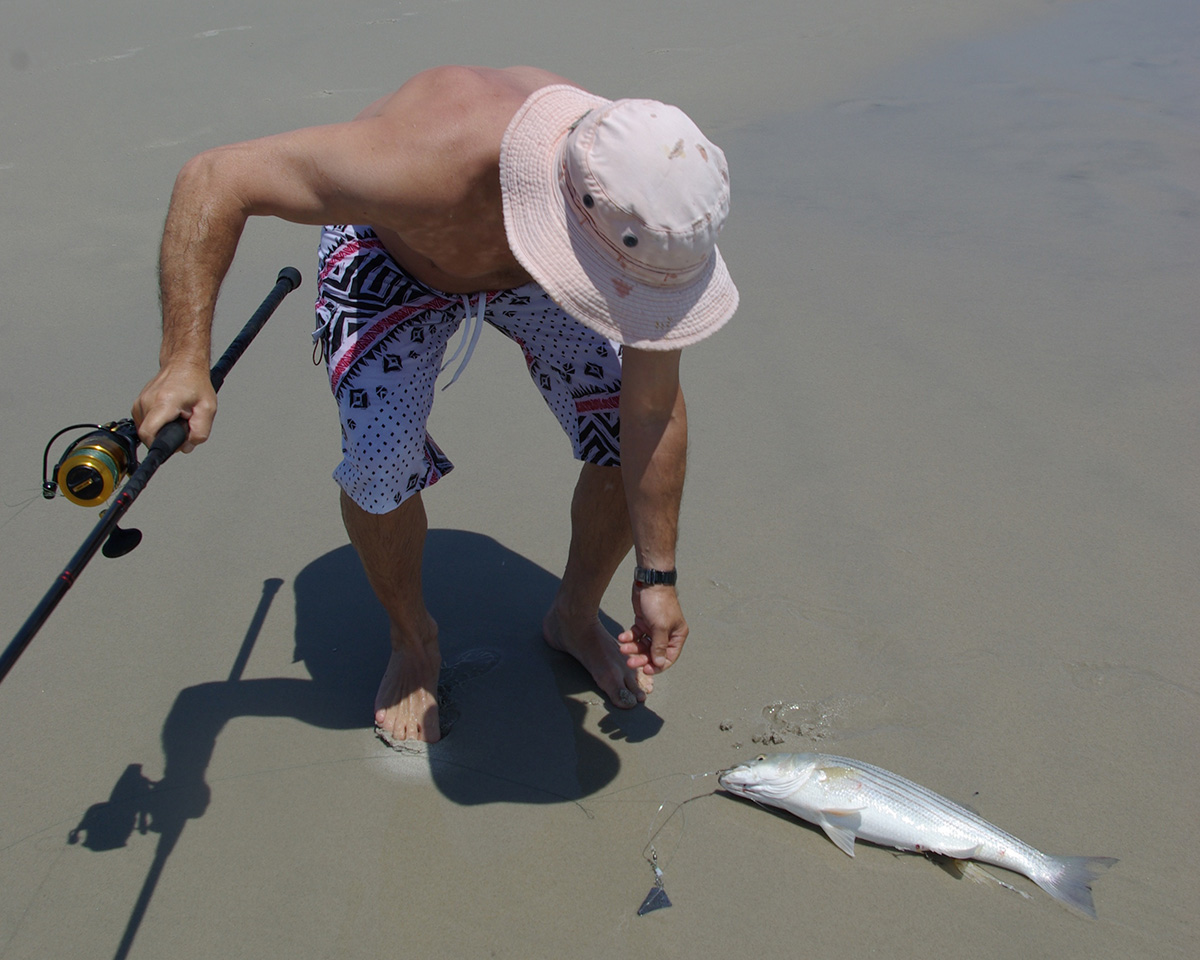 Back in ‘73 I had a Hurter’s blank that Bobby Woods had turned into a jetty rod matched to a Mitchell 300 reel filled with Stren 20-pound mono. I used that outfit for years and then switched over to one of those Garcia 10-foot surf rods with a metal ferrule. I think I had a Mitchell 302 on that rod and probably 30-pound Stren.

So why use that heavy outfit instead of the much lighter original? Because the more time I spent drifting sand fleas the more I realized it was a lot like cane pole fishing. There was no reason to cast out since the fish I was after were right in the rocks. All I had to do was drop the flea in up current, let it swing past my position and then either repeat the process or let the flea sit in one place in hopes a fish would find it.

When a striped bass (We call ‘em rockfish.) would find the flea the take was solid and a quick hookset usually resulted in the fish coming out of the water and flopping on the sidewalk. Remember, in those days we had no limits on striped bass, and a 12-incher was called a pan rock.

Today things have changed just a bit. My old Garcia rod and Mitchell reel are long gone. I now use a Tsunami TSAWSS1002MH rod matched to a Tsunami BFR 10000 reel. The line is still 30-pound, but it is Stren braid, not mono. I add a length of 50-pound mono as a shock leader to prevent the braid from coming in contact with the rocks.

I honestly don’t remember what I used for a hook back in ‘73, but I am sure they were some sort of J hook. Today I use black circle hooks tied to a 2-foot length of 30-pound fluorocarbon. If I was fishing the rocks on a regular basis I would tie the fluorocarbon to the shock leader using a double uni knot. Since I now spend more time on the surf fishing top-bottom rigs for kingfish I use a Cross-Loc snap swivel and simply connect the leaders to each other with that.

Can You Dig It

Back in the day I had two kids who thought digging up sand crabs was great fun. Today they have their own kids and are far enough away that I can’t depend on them to dig up my fleas. Fortunately, Old Inlet Bait and Tackle is right on my way to Indian River Inlet and they are more than happy to sell me enough fleas to last a day’s or night’s fishing.

When drifting fleas I look for rocks that protrude into the current leaving a bit of calm water on the down-tide side. I place the crab on the up-tide side and allow the current to carry the bait into the eddy where it begins to sink. Fish don’t like to fight a current and will lay in the calmer water waiting for food to wash past. At least that’s the theory.

There are two thoughts on drifting sand fleas. One is to set yourself up in a good looking location and stay there waiting for a fish to come to you. This has been successful for me on more than one occasion.

I recall one afternoon when I set myself up behind my wife’s Uncle Grover and Aunt Nellie’s truck camper. In those days you could park a camper right next to the sidewalk. The fishing was pretty good and as I would flip a rockfish up on the sidewalk Nellie would pick it up, clean and cook it then bring me the finished product. I do believe that was the freshest fish I have ever eaten.

The other theory is to walk up and down the rocks looking for promising locations and fishing each one for a short time. Back in my youth I subscribed to this, but since my poor old knees don’t move with the fluid motion they once did, I have given up walking on rocks.

In the past 40 years or so things have changed. Today a striped bass has to be 28 inches to keep, and there are not many of that size in the Inlet. Nighttime jetty jockeys do pick up one or two keepers here and there, but most of the striped bass come in well under the minimum size.

Bigger fish stop by the Indian River area in the spring and fall, but by then many of the folks who fish the inlet are back home watching football. On the plus side we now have fish available that were never heard of in Delaware until recently. Triggerfish and sheepshead currently live in the rocks and just love to eat sand fleas. Neither are available in great numbers, but some of the larger sheepshead top 10 pounds.

Then there was the 9-pound flounder caught by an angler drifting a live minnow rather than a sand flea. You just never know what you are going to catch out of Indian River Inlet; as for your favorite inlet, you just never know if a hungry striper could chow down on a sand crab impaled on a circle hook, unless you give it a drift!