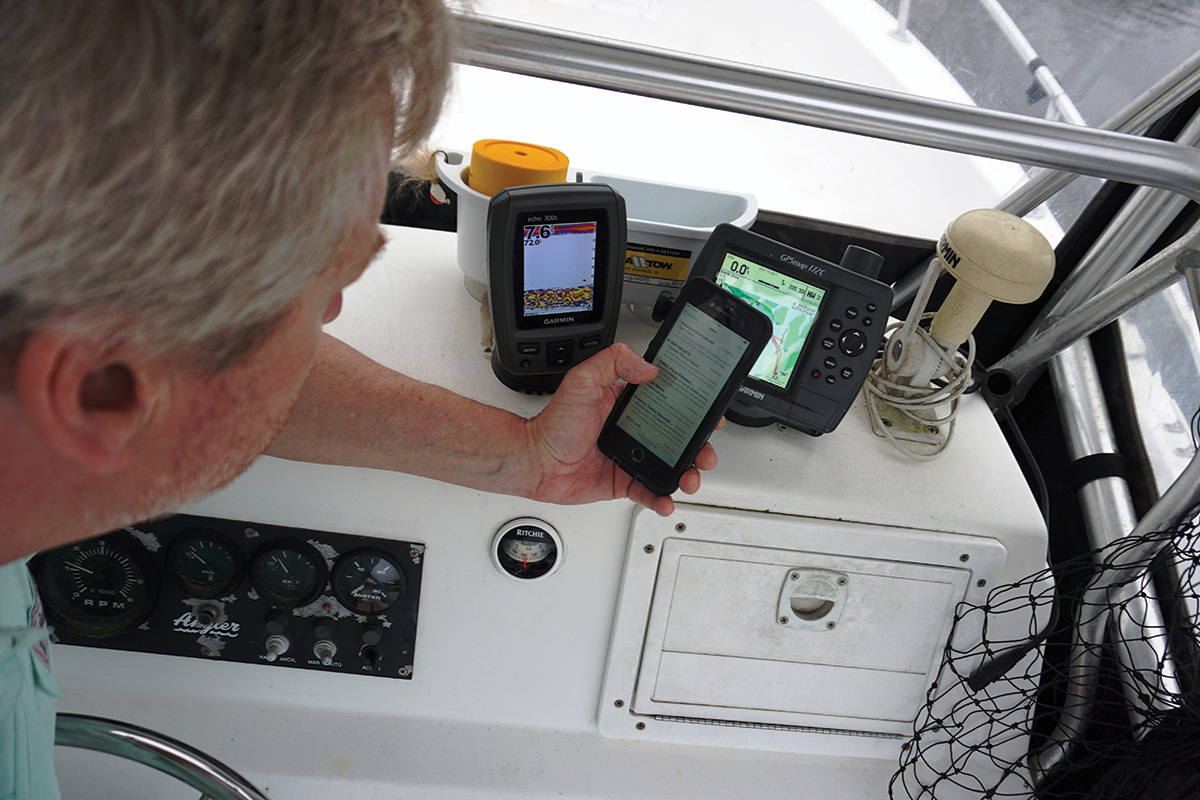 The opening day of New Jersey’s 2017 fluke season arrived on a Thursday; that’s a deadline day at The Fisherman, which meant I couldn’t stray far from the laptop. It didn’t matter anyway given the howling winds and driving rains; other than a handful of hearty traditionalists the opener was pretty much a bust.

I called my father that evening and said come hell or high water, I was fishing the back for flatties the following day. Even with stiff westerlys forecast, it was the Friday of Memorial Day weekend, and I felt our attendance on the fluke grounds as father and son was essentially required.

Dad met me at the dock at 11 a.m. just as the tide had turned to go out; we’d hoped a late morning departure would allow the water to clean up while giving us both time to get some work done at the computer. With my cellphone on the console next to the GPS and fishfinder, we headed out into Tuckerton Bay, up around the bend past Parker Island and out to the top of Marshelder Channel. Water temps were cool and the heavy rains the prior day left the bay water looking like chocolate milk. We drifted back and forth, crisscrossing the flats, humps and lumps along the channel, with nary a bump.

Back at home, our production crew was putting the finishing touches on the June edition. While all the materials – minus the upcoming weekend reports – were already in place, the final layout would still need my review. As we continued our prospecting trip, my cellphone was squawking and vibrating on the console with texts and emails. Putting the rod in the holder, I continued monitoring the production progress while peering into the phone screen, occasionally glancing up at the GPS and fishfinder.

“Bring ‘em up,” I said to dad. I started the engine and motored us out around the bend above Little Sheepshead Creek, hoping to find some fish along the edge of a north-south sandbar along the ICW. The wind off the marsh was now hard west to east, while the outgoing tide pulled us southeast, making for short drift conditions.

“You’re like one of the kids with that stupid phone,” dad mocked me from the bow, laughing as I downloaded work files onto my dumb smartphone.

“Best way to work while out on The Road,” I grinned back, again staring into that wretched phone aboard my center console aptly named The Road. Our production folks emailed the final production file, which I was now scrolling through page by page. Spotting a minor error on page 18 and another on page 36, I was alternating between the layout and a text itemizing my change requests. Without pen and paper, I was going primarily on my old, fading memory.

“Hey dad, remember page 36 okay,” I asked, my rod and reel again in the holder.

“Remember page 36, you got it,” he shot back, still actively working his bucktail.

Glancing away from the phone for a second into the onboard electronics, my gut wrenched and I quickly looked to port to see that we had drifted into a foot of water. “Bring ‘em up,” I shouted, turning the engine over and pulling down on the throttle to back off the shoal. I was about 5 seconds too late. We were snug on the flats, the west winds firming us up and outgoing water pulling us down into even more trouble.

Shutting down the engine, I stripped off my pants and climbed over the side to push us free; we were wedged tight. Dad would have to strip down to his own skivvies to hop overboard. Snotty as it was, we were the only ones on the local water that day or in it for that matter. Good thing too, as the vision of an old man and his father stripped to their undershorts was not exactly idyllic coastal scenery. I began considering the humbling call I’d have to make to Sea Tow.

It took some finagling, a lot of pushing and pulling, and a wee bit of father-son bickering, but we freed the boat from the shoal in about 10 minutes and slid back into the channel. We fished mostly in silence for another 45 minutes or so before turning back up Marshelder to work our way towards the barn. I finally finished my email to our production folks about an hour and half later in my home office.

After finally settling in on the couch with my wife later that evening, that horrible cellphone squawked again with a new text message. It was my father.

I smiled as I texted him back, “Sounds good. You take the helm next time.”