It’s August in New England and the summer is blazing, but for those that don’t subscribe to the ‘summer doldrums’ mentality, the fishing can be red hot as well. Striped bass, bluefin tuna, bluefish, fluke, and black sea bass are all on the brain as we bid farewell to July. But August brings with it, the hope for exotic species… albies, bonito, Spanish mackerel…and over the last five years we have welcomed the addition of a new species to our list of exotic visitors, the chub mackerel.

These cool little gamefish are characterized by their ferocious, frothing feeds that you can hear from hundreds of yards away, a torpedo-shaped body, a large eye and striking markings. They are difficult and rewarding to catch on ultra-light gear, an excellent bait for targeting larger species and taste great when properly taken care of.

The first time I saw these little speedsters I was surf fishing for what I hoped would be the first bonito of the season. My early morning that began with so much hope was quickly diving into frustration by 8 a.m. on that foggy August day. Then, all of a sudden, a foaming, frothing sheet of white water emerged from the depths in front of me plowing through the surface vacuuming up droves of “snot bait” (borderline microscopic baitfish; likely anchovies or silversides). I had heard of these fish and their wild feeds before and let me tell you, everything you’ve heard is true and there really is nothing else like it! They don’t pop like striped bass, thrash like bluefish or slash like false albacore or bonito, but watching these speeding bullets bring the water to a rolling boil is no less exciting.

My first few casts proved fruitless, they would not touch my striped bass fly.  It’s rather shocking when you cast something into such a ferocious shoulder-to-shoulder feed, only to be denied. I watched the anglers around me struggling to hook up as well and decided to downsize significantly. It was not until I trimmed a solid inch off of my smallest fly that I was able to go tight. These chubby mackerel are every bit as selective as they are aggressive.

From that day on, I saw them consistently through the rest of summer. These chubs seemed to take the state by storm, frothing from Watch Hill Light to Sakonnet Point. They can show up anywhere, but definitely seem to favor moving water, they are commonplace at the breachways from August through most of September and they show up in most of the popular hardtail spots as well. Last year, these tiny speedsters were prevalent from Martha’s Vineyard to Fishers Island, with sporadic reports from upper Buzzards Bay to well past the Connecticut River in Long Island Sound; I also have friends that found them in droves at Montauk and others reported seeing them in north Jersey.

A Change Of Pace

When taking clients out in search of large stripers or the adrenalin-laced runs of hardtails, these frenetic feeds provided a great change of pace, often adding a new species to the lists of many customers who had never even heard of a chub mackerel. The great thing about chubs is that they seem to be immune to the influence of tide or weather, so when slow tides or calm conditions made other species hard to fool, the chubs would often boil in to keep things interesting while we waited for the tide to make up.

In my experience, fly fishing is the most effective way to connect with chub macks. You’re going to want to reach for the smallest, most translucent fly in your box, these fish feed on tiny bait so trimming your smallest fly to make it even smaller, may be necessary to connect. Clouser Minnows in size 2 or 4, Bonito Bunnies in size 2, EP Micro Minnows, or small yak hair flies have proven effective for me.  Leader material and length did not seem to make much of a difference, but 9-feet of 12- to 16-pound fluoro has been my go to. For the most excitement, I’d recommend going light, 8- or even 6-weight setups paired with floating or intermediate lines—light rigs are the perfect match for these miniature hardtails.

The spin angler faces a bit more of a challenge here as there are so few baits small enough to get a bite that you can actually cast. The smallest Hogy Heavy Minnows or the tiniest epoxy/resin jigs you can find will work, however a casting egg with a long leader and a small transparent fly is, by far, your best bet. Toss those lures with a lightweight 7-foot spinning rod and a 3000 size reel, spooled with 15-pound braided line and a fluorocarbon leader of the same strength, and you are sure to enjoy the fight.

The accuracy of your cast, just like with bonito or albies, is crucial. Chub macks, nearly always, push quickly in one direction and if you cast behind them you’re not likely to hook up. Try to place your casts 5 to 10 feet in front of the school as they carve through the surface. With that said, I did see some of the larger schools of chubs break up into multiple, smaller pods that would intermittently pop up on smaller groups of bait.  While you do not need to burn your lure in like you would for albies or bones, you should definitely keep it moving at a good clip, as the chubs cruise faster than our other inshore species like striped bass.

While targeting chubs you may encounter bullet mackerel, a slightly larger species – typically 14 to 18 inches in length – that look just like small false albacore. These are equally fun to catch and operate a bit more like the larger pelagics, slashing the surface in small pods, popping up and disappearing at will…you know the drill.

If you are able to connect with some of these great little gamefish – whether they’re chubs, bullets or bonito – you are in for some fun and some good eating too! I kept a handful of each last year and prepared them in a few manners. I always recommend bleeding and icing your fish immediately after catching. Do not, I repeat, DO NOT let your fish sit out on the rocks or in a bucket on your boat for hours while you try to catch more fish. The reason you hear of some pelagic fish like albies not tasting great is because anglers are rarely prepared to keep them. When they do, it is often a half-hearted effort and the fish sits in rigor, heating up its natural oils, leading to an oily and fishy-tasting meal. The first thing you should do when heading to fish for food is fill a cooler with ice.

Once you have your cooler full of iced and properly bled chubs, I recommend filleting them and quickly brining them. The brine I use is very simple but delicious. I start with 4 cups water, 1 cup sugar, 1 cup salt, a few cracks of black pepper, 1 tablespoon soy sauce, 1 tablespoon maple syrup or honey, the juice of half a lime or lemon, and one bay leaf.  Pop that in the fridge for at least an hour before putting them on your smoker at the lowest heat or “smoke” setting for approximately 20 minutes before raising the temp to 225 until the internal temp reaches 145. Let the fish cool and enjoy.

If you keep any bullet macks, I suggest trying some as raw sashimi. Cut the fillets into 1/8-inch thick slices and enjoy with a bit of soy or ponzu sauce, some fresh wasabi, a squeeze of lemon and perhaps some very thin slices of jalapeño peppers. It’s delicious, trust me. 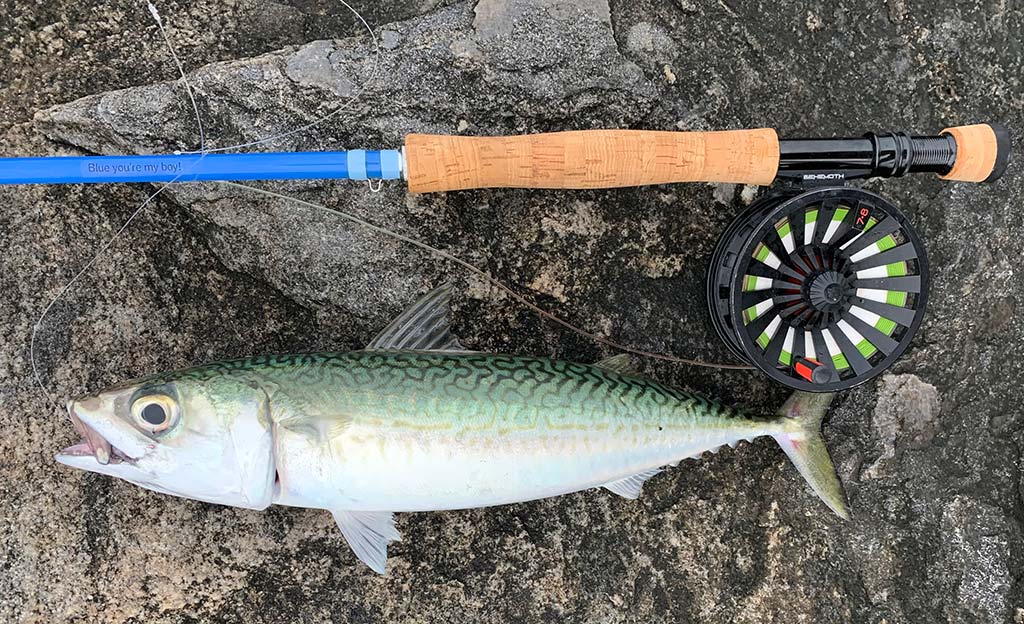 It is also undeniable that chub mackerel provide a great food source for large striped bass. There have been numerous accounts of outsized stripers shadowing the chub schools around Fishers Island and throughout the system of reefs at Watch Hill. If you read through the past few years’ reports you will find multiple entries where stripers from 40 to well into the 50-pound class have been caught on live chubs, or throwing large soft plastics or big topwater plugs around the feeding schools – and these oily fish would also make great chunk bait. I plan to fish around these pods for large bass, either using live-line techniques or throwing large glidebaits, mackerel-colored Super Strike plugs, the Splash Walk from Shimano or the Big Doc. There’s nothing like finding big stripers charged up on bait that are willing to smash topwater!

These ‘new to us’ species from southern climes are a welcome addition to the waters of the Northeast. They provide great forage for stripers, tuna and bluefish and they smoke up nicely for the table. One of the best things about them is that they are a fantastic practice species for anyone trying to tune up for hardtail season; the fast-paced action, tiny offerings and rapid acceleration will whip anyone into albie shape in a hurry. I look forward to watching them feed again this year, catching a few and eating my fair share with family and friends.