July and August are prime months to target South Shore wrecks like the Wolcott for double digit fluke.

It was a hot and sticky morning in mid-July of last season when my buddies Vic Viola and Tony Lima joined me for a day of ocean fluke fishing.  Our target was the Wolcott Wreck some 15 or so miles southwest of Moriches Inlet. With ideal weather conditions and flat seas, we made the 45-minute hike to our destination to find the depth recorder covered with marks from mid-depth to the bottom as we were nearing the wreck.  It resembled an aquarium of baitfish. I set up our drift to jig our bucktail rigs through the crusty bottom where we were quickly rewarded with a triple hook up consisting of big fluke and big sea bass. By morning’s end we easily nailed our legal limits and many more jumbos that were released for the next time. The day was my personal best in nearly 50 years of fishing, nailing 14 fluke between 8 and 10 pounds along with scores of big sea biscuits to 4pounds. Granted this was an exceptional day of being at the right place at the right time, however with the right weather and a tank full of fuel, the Wolcott is where you want to be if double digit size fluke are on your bucket list.

The Wolcott (40.35. 016/72.58.767) is an unknown schooner that was found and named by charter boat Captain Jay Porter on the day that Jersey Joe Wolcott beat Joe Louis in boxing’s title match. The Wolcott lies very close to the Patchogue Grounds, four miles northeast of the San Diego wreck in 83 feet of water.  It is a large, widely scattered wreck coveringa large area of bottom. Divers have reported that a huge fluted anchor can still be seen amongst the wreckage.  The Wolcott is excellent for cod, sea bass, monkfish and especially big fluke during July and August. By late June, fluke that have been staying out in deeper water begin to concentrate further inshore, and the Wolcott is in a prime location. The main goal of these big flatties is to fill their bellies with the myriad baitfish available through the area.

The Wolcott is easy to locate, however do not expect to see much wreckage on the recorder as most of the debris field is clustered pretty tight to the bottom. Some areas of the bottom are sticky, but for the most part, you can fish the area with a minimum of tackle loss. The wreckage provides the hard surface required for algae and invertebrates such as barnacles and crustacean to attach to. This accumulation of marine life provides the necessary ingredients to attract a variety of baitfish that become candy to big fluke.

Fluke fishing around areas of obstruction such as the Wolcott is in a category all to itself, and to understand the layout of the bottom structure is definitely a key to success. While navigation charts and electronic devices will certainly assist in getting you to the charted wrecks, they won’t tell you how they lay. Therefore, some trial and tribulation will go a long way in putting a few slabs in the box. Basic 101 tells us that drifting directly over a piece of obstruction for fluke often results in hang ups and lost terminal tackle. Drifting along the sandy fringes located in the nooks and crannies between the wrecks and along the edges of a reef are where 99 percent of the fluke ambush their meals. While being very close to a piece of structure is a good idea, it is not vital. I find that fluke tend to stay within a quarter- mile radius of the wreck as most often you will mark all sorts of bait surrounding the obstruction as well. Then again, if the loss of terminal gear is not a concern, you can be sure that there are quite a few double digit flatties clinging tight to the pieces munching on small porgies and Jonah crabs. This holds true at the Wolcott.

While wrecks such as the Wolcott make great stomping grounds, they are certainly not the only option when it comes to hunting big fluke. Break lines and drop-offs are often great places to find bait. These can occur at just about any depth, but on average if you want to stay away from sea robins and skates, look to concentrate your efforts between 65 and 80 feet of water while heading to the wreck, whether you’re coming from Fire Island or Moriches inlets. Another option that is extremely effective is working areas where the ocean bottom has been dredged to put sand back on the beaches. Post Super Storm Sandy resulted in extensive erosion along the South Shore’s barrier beaches where dredging continues to be ongoing from east to west along Long Island.  According to marine biologists at Stony Brook, often these dredged holes that sit a mile or so from the beach are dug deep exposing what is called “prehistoric bottom” which is actually fossilized bottom from a time of the Ice Ages. At one time this area of the ocean was actually marshland that over time sunk into the sea from rising ocean waters. The terrain on this bottom resembles shallow craters, and these numerous depressions serve as bait and fish attracting structure.

Generally speaking, a drift of 1 to 1-1/2 knots is ideal since this speed keeps the fluke aggressively chasing down your offerings while minimizing the activities of undesirables such as skates and crabs.  A drift slower than a half knot often results in a burdensome pick of skates, which can make for a frustrating trip. One way to solve that problem is by power drifting. Kicking the engine in and out of gear and keeping the boat at a knot, knot and a half will help ease the skate activity. A drift much over 2 knots may be too fast, which will require more weight to hold bottom, and result in a lot of short strikes, particularly in water deeper than 60 feet. However, a sea anchor can be used to slow the drift down, allowing your rig to stay on the bottom and give the fluke a shot at the bait.

When fishing on the Wolcott or any area of structure with sticky bottom for that matter, your best results will come from rods with fast taper tips for sensitivity,and powerful butt tapers for the lift needed to haul any outsize flattie from the debris field below. My favorite combo that suits the situation perfectly is a 7-foot rod in the 10- to 20-pound class matched with a solid conventional reel such as the Daiwa SL-X30SHA Sealinewith its 6 to1 ratio. KastKing’s 30-pound braid completes the combo. The sensitivity and fine diameter of braid makes these lines a no-brainer for deep water fluking. 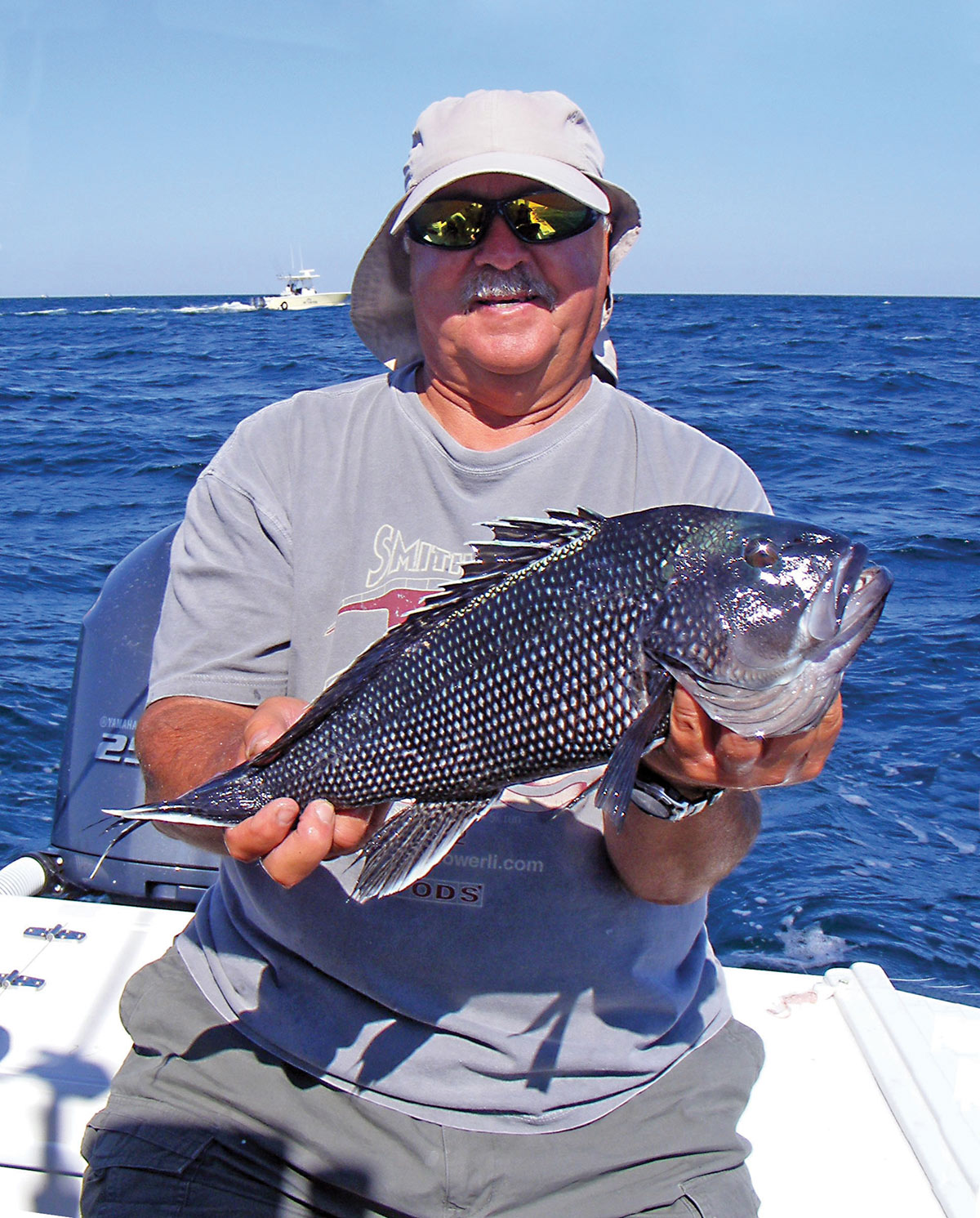 Fluke rigs can be as complex or as simple as you wish to make them. You can’t go wrong with the standard plain Jane rig. As for those with all those bells and whistles, some of them do a fine job scaring jumbo fluke, while others do a great job of nailing shorts or keepers on the small side. While the rig I favor, the Christmas tree rig, is no secret, it is extremely effective time and time again under normal drifting conditions during the fall run.  First I tie an 8-foot leader of 20-pound fluorocarbon via an Albright knot to the braid. Next on the other end of the leader I slip a 3/8-ounce gowSprobucktail or Sproglow squid tail approximately 2 feet up the leader and work it inside of a dropper loop. I repeat the process with another 3/8-ounceSpro jig approximately a foot below the top jig. At the end of the leader Iuse either a 3- or 4-ounce Sprobucktail or a Tsunami ball jig depending on the speed of the drift and water depth. If conditions permit you to go lighter on the bottom jig, then by all means do so. If it takes more than 6 ounces to bounce along the bottom, then you need to slow the drift via a sea anchor.

Contrary to popular belief, you do not need long strips and big baits to slam big fluke. Please don’t be misled, the big baits work very well, just not on the Christmas tree rig. Four-inch strips of squid, fluke belly or better yet, freshly stripped down sea robin belly work great on the small bucktails, while a 7- or 8-inch strip of fresh sea robin belly is hard to beat on the bottom jig. If available, you can add fresh bluefish strips to the menu as well. Standard spearing and sand eels are fine; however, if at all possible, use the freshest strip baits available as these fish much prefer fresh meat.

The key to nailing these bruisers is patience, especially since these big fish are often not as aggressive as their smaller siblings. In other words never take the bait away from a fluke if you miss it on the first bite. The biggest mistake many anglers make is taking a major league swing, and then reeling up to see if any bait remains. This is a no-no. Instead, keep the bait down there for at least a minute or two. Big fluke will follow bait a long time before committing to it. Therefore, give them a chance.

As long as there are no major storms, history should once again repeat itself as it does every July and August. The window of opportunity is short,but rest assured there are some monster flatties waiting at the Wolcott. There’s also a 21-foot Steiger Craft up for grabs in this year’s Fisherman Dream Boat Challenge waiting for a new owner. Do I need to say more?