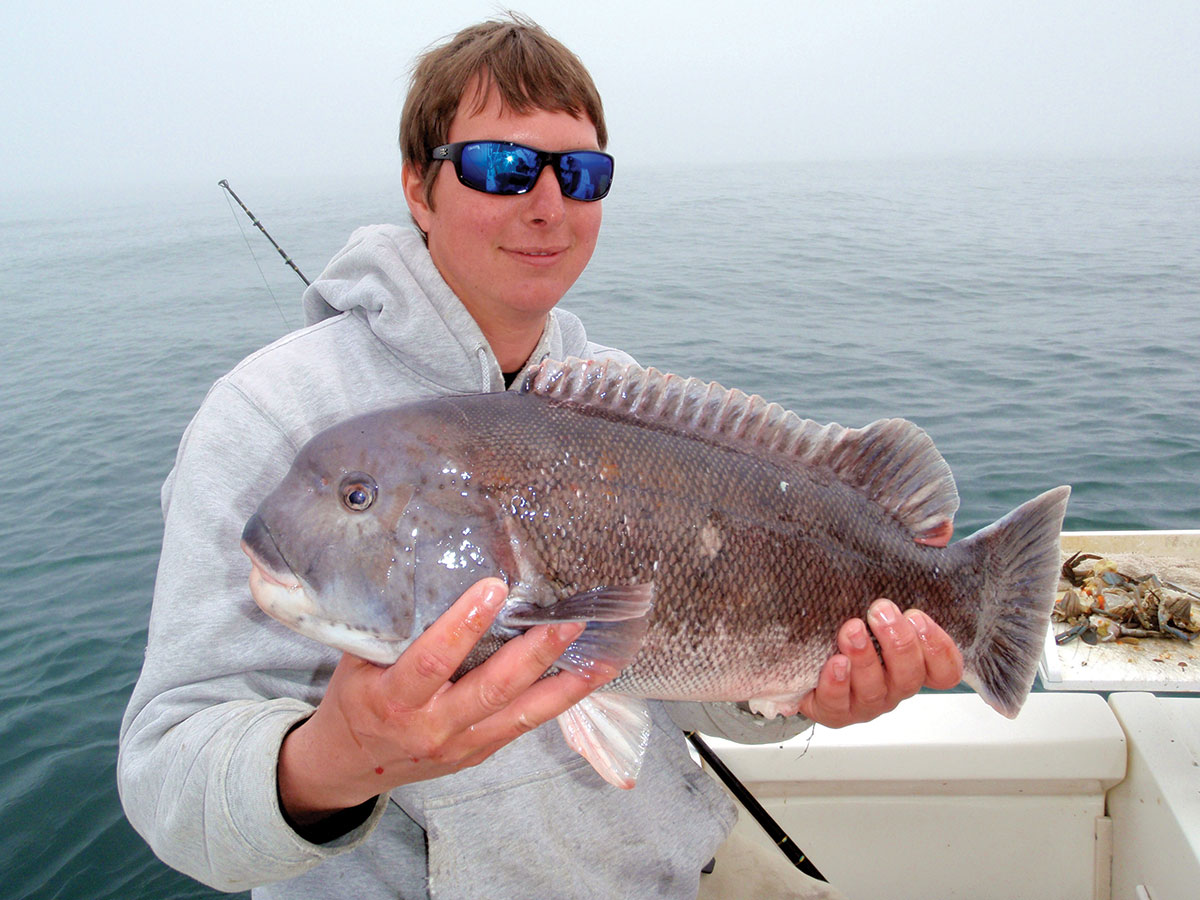 While jigging for blackfish is nothing new, the advantages of a tog jig are numerous and hard to ignore.

Without a doubt, fishing for blackfish ranks tops on my list of favorites. Quite candidly blackfishing requires precision and skill that makes the sport challenging and requires a whole lot of patience, especially when anchoring over small pieces of wreckage. Fortunately we have the much more forgiving rocky shorelines of the Long Island Sound where each October most of the rocky points and peninsulas that stretch from City Island to Petty’s Bight shift gears by replacing porgies and pin sea bass with pretty good populations of mixed size tog, giving small boat, light tackle anglers a heck of a good time drilling out chunky blackfish from these shallow rocky lairs.

Not only are blackfish structure reliant, they are sensitive to water temperature. During the early fall along the North Shore, blackfish congregate in the shallows relatively close to the shoreline. In fact, many areas where large boulders are partially exposed during mean low tide, blackfish will move in at high tide feeding on the abundance of barnacles and crustaceans such as periwinkle snails, blue mussels, sea slugs, and Asian and green crabs to name a few items on the tog’s diet. Unlike the South Shore where tides will drop and rise no more than 2 or 3 feet under normal conditions, the water level in the Sound will fluctuate 7 to 9 feet. Add or subtract another two or three feet during a full or new moon or during a strong northeasterly. As the tide recedes the blackfish will again move off the shoals and back into the deeper 15- to 25-foot drop-offs which, are usually just a stone’s throw from the boulders that surround these points and peninsulas. As the month progresses and water temperatures chill, blackfish will move a bit deeper and continue to do so into early or mid-December when they will hit the basement and spend the winter months in the 150-foot depths of the Sound hibernating until spring. Blackfish are most comfortable chewing and living over rocky lairs in the 50- to 60-degree range with 55-degree water temperature ideal for aggressive feeding. Therefore they will seek out and reside in depths that fluctuate to those temperatures. Once water temps drop below 45 degrees, the tog will become pale as their color fades before hibernating.

From Steppingstones to Orient Point, the rocky ledges sitting off most of the shoals hold plenty of blackfish during October. While some rock piles are limited to groins or barriers to prevent beach erosion, just about every point has a spillover of boulders in the waters that surround the pieces of land.  Most ledges rest in depths from 15 to 50 feet, which are the perfect lair for the spirited tog. While the west end of the Sound sees a good influx of keeper tog by mid-October, the bite has been just as good as you travel east in recent years. Most of the shoreline will have a healthy mix of togs ranging from shorts to six pounds. However, some bruiser white chins from 8 to 10 pounds are always a possibility. Areas like Crane’s Neck and Old Field Point generally give up togs from shorts to 4 pounds, whereas areas such as Trumans Beach, Mulford Point and Rocky Point produce keepers in the 3- to 5-pound range. Forget those monster togs of yesteryear. Unless you have a wreck in the Sound that pretty much belongs to you, the abundance of lobster pots and commercial fishing have done a fine job of dwindling the population of big white chins, especially since blackfish are slow growers and do not migrate too far from where they were born.

It seems hook, line and sinker rigs have taken a back seat to jigs these days, especially among savvy sharpies. While jigging for blackfish is nothing new, the advantages of a blackfish jig are numerous and hard to ignore. The bean-shaped design of most tog jigs slice easily through the water column so anglers can significantly downsize the weight of their payload from the typical 3 to 4 ounces of lead to 1 ounce of jig. Unlike the multi-lined, multi-hooked, weighted bait rig, you can use the jig to prod every nook and crevice where a tog might be hiding. And contrary to what most tog anglers fear, hang ups are far less than when using a typical bait rig. The compact nature of the jig and the fact that the hook rides up are the main reasons why the jig is out of harm’s way during much of a retrieve. Inevitably, the jig eliminates anglers sitting stagnant, waiting for a tog to come along. In fact, a crew that works together will often move along the deck, walking the jig along the bottom and prodding every likely blackfish den from every possible vantage point, and covering every inch of a potential honey hole.

It’s paramount to understand that the jig on its own is not what entices the tog, it’s the crab hooked to the jig that causes all the ruckus. The dappled color scheme of green and orange was designed to make the jig blend in among the filtered light and varied bottom where blackfish thrive. Although blackfish will crunch up all manner of crabs including rock crabs, green crabs and hermit crabs, Asian crabs are on the A-List over rocky terrain. Using them whole by running the hook right through the middle of their bodies is the ticket. Understand that in recent years Asian crabs have plagued the rocky shorelines that protrude along much of the Northeast and are considered an invasive species. The same can be said of the green crab. To obtain a day’s supply of the Asians is as simple as visiting a rock strewn shoreline along the North Shore during low tide. Turn over a few stones and the Asians will try to scat away at lightning speed so be ready for a chase. If you plan on fishing the crabs in a day or two, you can keep them healthy in a container in the fridge. Otherwise a few days out of the water will render them useless. The best-case scenario is if you keep a live baitwell at your boat that will keep the crabs lively for as long as you please. A well-insulated cooler kept out of the sunlight and in a dark cool place with the lid closed can keep the crabs alive between one to two weeks. Asian crabs will most often succeed when all other baits fail. Green crabs are the easiest to obtain, but at times will be ignored, especially when Asians are being employed close by. Stone crabs (aka white crabs) are a natural enemy to the tog and are top notch bait later in the season when the water becomes cool and the tog relocate in deep water. Keep in mind that NYDEC allows you 50 crabs per day. Truth be told that amount may last about 15 minutes when the bite is on. Depending on the Conservation Officer, they may hold you to a limit of 50, while other officers understand that they are an invasive species and allow you to take a day’s supply. I reached out to the Stony Brook DEC office and have not received a definitive answer on this issue.

Tog fishing and spinning tackle to me are like oil and vinegar. The only exception is early fall while employing the jigs when the fish are up in the shallows and when the current is flowing slow to moderate, and of course while casting and poking around looking for any little bit of drop off a rock or obstruction. Stout, fast tapered spinning rods in the 7-foot range will do the trick, with a reel packed with 20-pound braid and a top shot of 15- to 20-pound fluorocarbon. A fluorocarbon leader is relevant in shallow water, especially in anything less than 30 feet deep, with the lighter the leader the better. Trust me – the resultant action can be as different as night and day. Blackfish can be quite line shy and skittish, especially when using bait other than Asian crabs. The lighter fluorocarbon leader will keep your rod bent, and you’ll also dupe the better size fish that may ignore a mono leader.

Mastering the feel of the bite can be a true brain teaser at times, then of course there is the simple technique of lock and load. When the chew is the latter, it will all seem so easy since the fish are inhaling the bait, which can feel like being slammed by a jackhammer. Then there are those pesky nibbles or rapid-fire slams that are more often than not small bottom dwellers that will usually chew away at the innards of cut up green crabs. Should that be the case and green crabs are the only bait on board, there’s not much you can do but cast around until you locate some tog, or you may need to make some adjustments with the anchor. Often that will do the trick as an adjustment as little as 10 or 20 feet can be all the difference. I can’t emphasize enough how relevant Asian crabs are on the rocks in the early season. Finally there are those cunning subtle hits that go unnoticed. You drop the jig to the bottom, wait, nothing, reel up and the jig is empty. Should that be the case, use slow uplifts continuously and once you feel the grab, set the hook just as you would flounder fishing and that should do the trick. Be sure to keep the hook sharp, honing it every few fish.

Some basic brain food and your GPS can put you pretty much where you want to be. Anchoring for blackfish is almost always imperative among the rocks and strong currents. Anchors must have an ample supply of scope to hold and adjust over the area planned to fish. Always try and anchor on sandy bottom and work the anchor back on to the rocks since there is always the possibility of the anchor getting wedged in. Always have a backup with at least another anchor, chain and rope. Speaking of chain, make sure to have a least 12 feet of solid galvanized chain that is suited for the size of the boat. The longer the chain the quicker it will set, giving better control and fluctuation when setting up over a preferred spot. When it becomes time to lift the anchor, you’ll want to resort to an anchor ball, which makes life a lot easier.  This is especially true in hard running currents when lifting the anchor becomes a tough job.

Lastly, keep in mind that the Sound can kick up and become unstable in a matter of minutes. If the forecast is predicted to blow hard out of the northwest, plan for another day, especially fishing near the exposed rocks. Make sure your VHF is in good working order and the PFDs are within easy reach of everyone on board. As always, please practice self-restraint and please stay in the limits of the law.