When stripers begin feasting on schools of sand eels, it’s time to break out the jigs and hop aboard a South Shore open boat.

Superstorm Sandy hit us hard in October of 2012 and soon after the autumn landscape for striped bass changed dramatically. At that time I had been fishing for linesiders for over 40 years, with the last 25 mostly from the beach, as well as private and party boats in Montauk. From the beginning of autumn until the season closed on December 15th was the time when you could really count on lights out bassing. For example, in Montauk there would be great nighttime eel fishing (which is still tops during the summer), followed by daytime jigging and when the herring run began it was truly frenzied action with plenty of cows landed. It seems like just yesterday that I was sailing on the Viking and the Lazy Bones out of Montauk and jigging stripers while the snow was gently falling and catching and releasing many bass. But now, it’s as though as soon as the cold northeast and northwest winds of autumn begin blowing, the linesiders seemingly skedaddle, with some camping out along the South Shore of Long Island where they remain for as long as the bait is there. You might think that’s because they are following the bait, but that can’t be the case because there is still lots of bait available in the easterly locations.

I’m not a marine or a fish biologist and don’t know the exact reason or reasons for the changes in the bass’ autumn migratory patterns or why this has happened; or if it’s simply due to the overall numbers of fish having decreased? Was Sandy to blame? Or is it global warming? Overfishing? Commercial fishing? To discover what is truly happening will take research and some creative thinking on the part of NOAA scientists, fisheries specialists and ASMFC to figure out the best management options to ensure we have healthy striped bass stocks going forward.

During the latter part of the 2018 striper season, if you wanted to be assured of connecting with migrating stripers, you had to follow the fish, which usually meant Captree, Freeport and points west where party, charter and private boats did a good job jigging stripers. If you found working birds, the fish were usually beneath them, while at other times you had to rely on the fishfinder to locate bait and fish down deep. When fish are found on the surface, care must be taken not to race into the feeding fish as you will send them down and at times put them off their feed. Party boat skippers will position the boat either upwind or up-tide and drift into the schools.

So let’s take a look at what’s required. First off, you’ll be fishing at a time when the weather can get quite chilly, so dress accordingly. Remember that air temps can be quite different on the water than land, meaning at the least a pair of boots and a heavy jacket. The party boat trips are normally five hours duration, so bring something to eat and drink. Hot coffee is available on most boats. 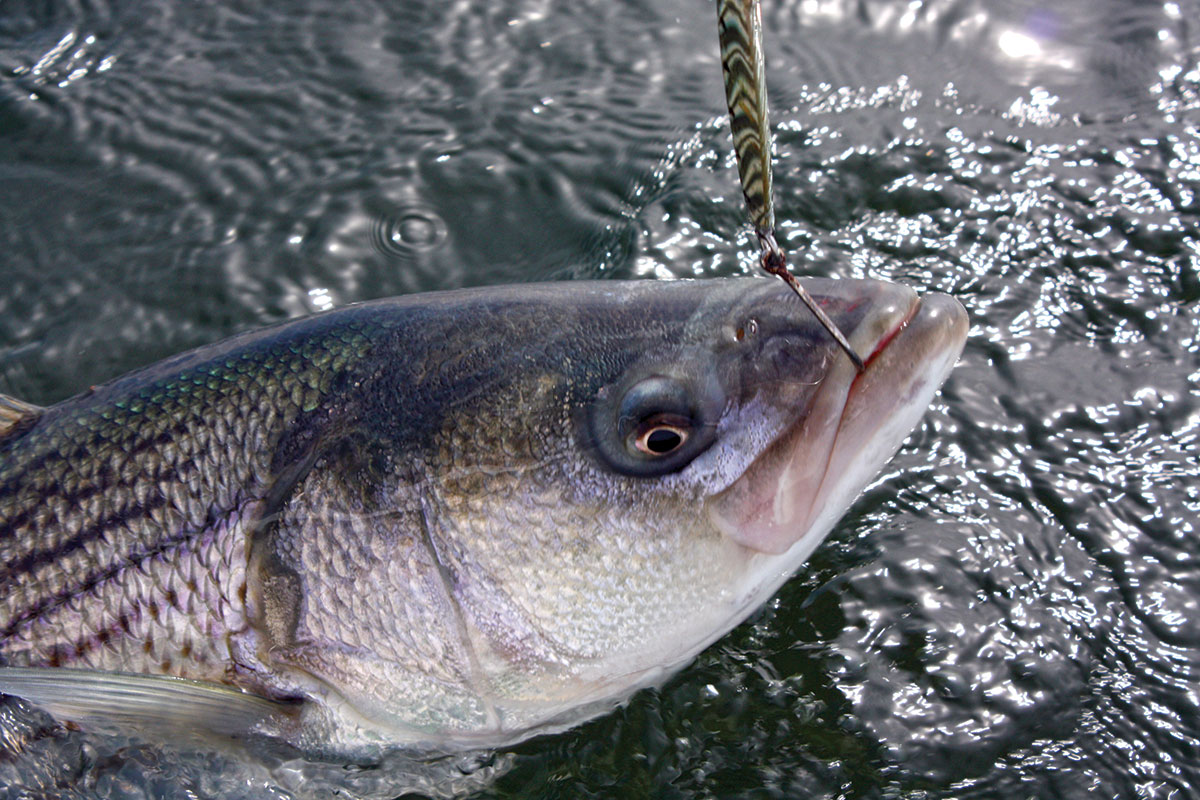 If larger fish are on the menu I like to use a 7-foot Shimano medium to heavy Terez rod and an Accurate BX-400 reel, spooled with 50-pound braid, with an approximately 6- to 8-foot 50- or 60-pound fluorocarbon topshot. This is the outfit I use in Montauk and Block Island when fishing live eels. The 2018 South Shore fall run however, was made up of lots of small stripers just above and below the 28-inch minimum size. If you want to have some sporting fun, bring along a light spinning outfit. In case the big boys and girls are also in the mix, which happened at times last year, I use a Shimano Stradic 3000 spooled with approximately 125 yards of 30-pound braid to which I attach about 2 yards of 30-pound mono or fluorocarbon with an Albright knot. A 6-1/2-foot, medium heavy action graphite Ugly Stik rod rounds out the outfit. It takes a while, but you can definitely handle the larger fish on this tackle and have lots of fun in the process. After realizing it was mostly small fish we were targeting, I’d switch over to the spinning equipment and had a ball. Another advantage to using a light spinning outfit is that you can use a smaller jig in the 2- to 3-ounce range, which was the perfect size for the smaller bass.

The type of jig that works best varies from day-to-day. On some days plain silver works best, while other days hammered jigs in either silver or gold are the ticket. Other times a jig with a small white tube is the way to go. Keep your eyes on the people who are catching and match what they are doing. Take note of their speed of retrieve, are they dropping all the way to the bottom, and also pay attention to what size or color jig they are using. Since the fish are mainly feeding on sand eels, you want to mimic them and the best way to do that is to either drop your single hook jig (easier unhooking and better for catch and release) straight to the bottom or underhand cast it away from the boat. Once the jig hits bottom reel it up approximately 10 to 20 cranks, then drop it back down and repeat. Do not simply move the tip of the rod up and down or the jig won’t resemble the baitfish. I witnessed this firsthand last autumn aboard the Captree based open boat Fishfinder II run by Captain Walter Czekaj. Anglers that followed the captain and first mate Jeff’s instructions and cranked the jig straight up did well with Jeff netting and releasing many linesiders, while those who simply moved the rod tip up and down near the bottom caught mostly dogfish.

What will the 2019 autumn season bring? I don’t know, but hopefully the bass will return to their old haunts and migratory patterns, so be ready to jig linesiders anywhere from Montauk to Sheepshead Bay and everywhere in between. If you see a pattern developing with a certain area consistently producing the best action, it is likely it will hold true for an extended period of time. In that case, go where the fish are. Follow the ads in The Fisherman to see what open boats are targeting stripers, since sailing schedules sometimes change from year to year.