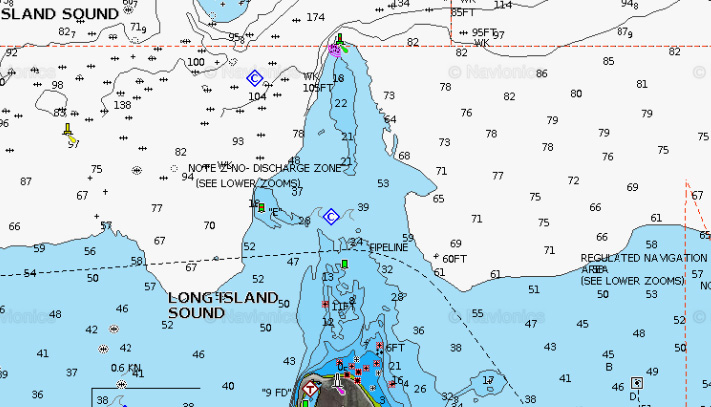 Those who fish the pristine waters of Long Island Sound’s Eaton’s Neck, which rests north of Northport Bay, should be familiar with the fishing grounds known as the Eaton’s Neck Triangle. The Triangle is popular through the season for striped bass, bluefish, porgies, sea bass and blackfish. The Eaton’s Neck Triangle is roughly the area outlined by three buoys: Buoy 13 off the tip of Eaton’s Neck, the OB (Obstruction Buoy) marked as “E” on charts, and Buoy 11B. While the whole area is loaded with structure and produces strong tidal currents, let’s keep our focus in the area of Buoy 11B as this particular area has been red hot for bass, blues and that popular trio of groundfish for the past few seasons.

Starting with stripers, the high ground just south of 11B features some pretty strong currents that clash with the high spot from the deep water, which in turn sweeps up baitfish and makes them vulnerable to attack by gamefish positioned behind rocks and ledges. The best bass fishing begins in the spring—usually late May into June—as post-spawn stripers move out of the Hudson River and into the western Sound to gorge on bunker. Not surprisingly, live and chunked bunker account for many of the big bass taken here.

In the spring, the bass can be found in many different areas including shallower structure and behind large boulders in 20 to 30 feet of water. The currents are the difference between catching and not catching stripers while fishing the Triangle. The general rule is that inshore areas around the OB buoy see more productive fishing on the incoming tide while the deeper areas around the 11B buoy produce better on the outgoing tide. It is paramount to have a moving current to get the bass chewing. Drift up-current of potential looking structure and fish your baits so that they drift over structure where bass are looking to ambush forage.

As June and July roll in, plenty of bluefish and some good fluke fishing can be found around 11B. In the fall, sea bass and porgies steal the show while striped bass action picks up again, and they are joined by the insatiable bluefish. Anglers working diamond jigs in the rips near 11B have the edge for bass and blues. Keep in mind that the best of the bite occurs at the start of the ebb tide and continues to be productive for the first two hours or until the gamesters have enough to eat. November is blackfish time in the Buoy 11B area, especially the bottom just south of the buoy, which features an abundance of rocks in depths ranging from 20 to 65 feet. Green grabs and Asian crabs keep rods bending with lots of shorts, but a decent amount of keepers as well.