The hand-sized baitfish struggled mightily from my grasp as I impaled the hook into its back and tossed it overboard into the crystal clear water. The big float disappeared within seconds after landing, and after a fight that lasted for seemingly an eternity, the gargantuan, long, silvery green adversary was finally brought to net. I was in awe of its massive size, razor sharp teeth, and tenacity of battle. I’d never been this far away from land in such a small boat, nor tangled with a fish this size. This was my first fight with a true trophy.

Twelve-year-olds have a knack for remembering such explicit, if not exaggerated, details. My dad had taken me and a friend to an upstate lake to fish on the family jon boat, and the target that day was anything willing to bite. The trophy fish above happened to be a 3-pound pickerel that inhaled a crudely rigged shiner on a kinked, 30-pound test leader on the outside weedline. Since that day, I’ve been refining how I present live baitfish to primarily striped bass.

From what I’ve been asked and what I’ve read on internet forums, there seems to be some confusion as to how to rig large profile baitfish like bunker and shad. When fishing these big baits, I’ve come to rely on three hook placements that cover most of the situations I encounter in western Long Island Sound, but are just as effective wherever similar conditions are found. Each has its time and place, but first things first.

Many of the stripers we catch these days are released. The one fish bag limit means you are more than likely going to be releasing most of the bass you catch over the course of a season. Also, when fishing these large baits, most of the fish you catch are on the large side so even if you are fishing with one or two other people, or if you are fishing consecutive days, how much meat do you really need? On my boat, I fish circle hooks exclusively with all live baitfish, and I’m surprised there has been no legislation to require the use of circle hooks for all baitfishing for striped bass, given the high percentage of fish that must be released. Circle hooks are much less likely to gut-hook fish as they generally set squarely in the corner of the jaw, and with a short learning curve, are just as effective as J-hooks. When fishing these large baits, size 8/0 or 9/0 circles are pretty standard, but I know some folks who use as large as 10/0 when fishing big bunker or shad.

Hooking these baitfish in the upper jaw, just behind the “lip,” is my default method of rigging. Whether you’re at anchor or drifting, if there is enough current to keep the lines streaming away from the boat, this is the way to go, whether on a float, on a weight, or free-lining. Open the baitfish’s mouth by squeezing gently on the gill plates and insert the hook point from inside the mouth just behind the upper lip. This allows the bait to suck in water and swim just as they naturally would. Some people favor sticking the hook point horizontally through the nose or eye sockets, but I believe this not only injures the bait when the hook is placed through the eyes, but also makes for a less natural presentation. Since the hook has more mass on the shank side than the point side, it tends to tilt the bait to the shank side. Hooking it vertically with the point up keeps the weight of the hook towards the bottom of the bait, allowing it to swim as nature intended.

Fishing a livey is sometimes akin to walking a dog. Oftentimes it tries to go wherever it wants, rather than in the direction you want it to go. When fishing a baitfish under a float, oftentimes I stick the hook just behind the dorsal fin from left to right (left side of fish—see photo) taking care to place it in the meat between the top skin and the spine. Baitfish try to swim in the direction opposite to where they are being restrained, and the combination of the float’s resistance and hook placement in the upper dorsal area encourage them to dive and stay at the depth you set them at without requiring additional weight, which makes the presentation more natural. Like any live bait scenario, however, this is a balancing game. Keep in mind the prevailing wind and current conditions, and take care to keep the bait from being dragged along by the current tail-first, which is not only an unnatural presentation, but shortens the life expectancy of your baitfish.

This is preferred when you’re setting a bait on the bottom with very little or no current at all. A running current will eventually overpower your bottom-anchored bait and cause it to be dragged and held head-first down-current where it will die in short order. Slip the hook in left to right just behind the vent.

As noted above, the bait will try to swim away from the direction of most resistance. In this case that’s from below due to the location of the hook and weight, which results in your bunker or shad swimming above the bottom. This also makes it an ideal hooking position when you are at anchor or on shore. Baited this way in conjunction with a fish-finder rig allows the bait to “search” or swim wherever it wants to go.

When fishing live baitfish, regardless of your presentation, remember that you’re trying to not only keep the bait where it needs to be in the water column, but also keep your footprint on the bait to a minimum. Following these tips ensures that your bait stays fresh and lively for that moment when a true trophy cow cruises into your fishing world. 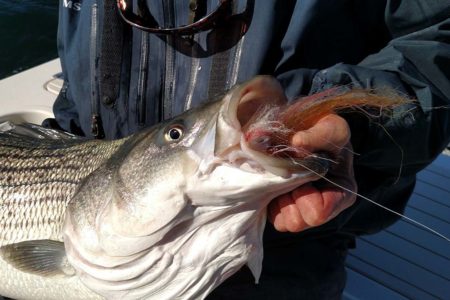 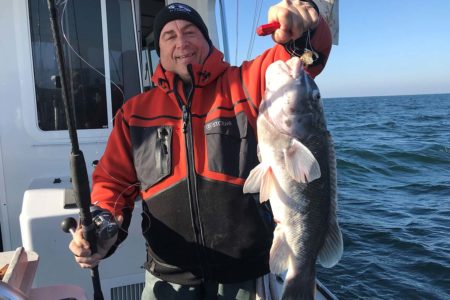 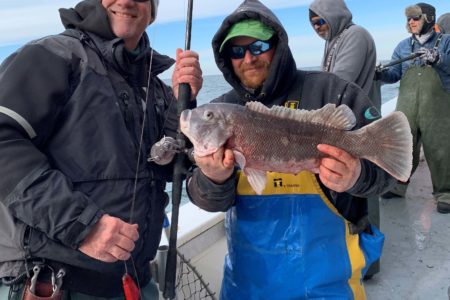