Who will be named victorious in the war between live eels and their rubber counterparts on the striped bass battle grounds?

Regardless of the type of fishing you prefer, hot lures and baits come and go from season to season. Some of these trends are based on fluctuations in prevalent bait patterns, and others are based on little more than solid marketing tactics. In today’s digital world, you can add the power of ‘Social Influencers’ into the mix when talking about why a given tactic is popular.

In July of 2019 I wrote an article about using large rubber eel-like baits for striped bass (Eel Alternative: Rubber Worms for Bass), and this followed up on an earlier 2019 article in which Tommy Fucini talked about pouring big soft plastics at home (Pour Your Own: Making Soft Plastics.) But fishing ‘rubber worms’ for big striped bass is nothing new as the late Tim Coleman was doing a number on the New England striped bass back into the late 1980s on 12-inch Berkley Power Worms fished on special jigs produced by Andrus Tackle. However, like many things, rubber eel-like baits had fallen out of favor with many anglers until several years ago when they saw a major resurgence. This was fueled by companies such as Hogy, Got Stryper, Ledgerunner, Slug-Go, Gravity Tackle and others who began making oversized saltwater specific baits. This meant that anglers no longer had to make do with what our sweetwater friends produced. We instead had our own purpose-made options. Seemingly overnight, the rubber eel craze was on and some impressive scores were made. I even fell into the fad landing some impressive bass from the surf on some of these ‘new’ rubber baits, but I kept asking myself, “How would they stack up against the real thing in a head-to-head battle?”

So this idea slipped in and out of my head for a while, and it wasn’t until a discussion earlier this summer that it felt like something might come of it. I was speaking with friend and regular fishing partner John Frione about summertime bassing at Block Island. We began to make plans to fish the usually good run in early July, and I thought of this as the perfect opportunity to test the imitations against the real deal. It wasn’t until a conversation with Tommy Fucini of Tsunami tackle a few days later that things really started to come together. I went back to John and pitched the idea to put four guys on the boat—two experienced with live eels and two serviceable rubber bait guys—and see how things would shake out after a tide. John loved the idea, and the article was beginning to gather steam.

A few weeks later Team Rubber Eel (Tommy ‘Tsunami’ Fucini and yours truly) joined Team Real Eel (John Frione and ‘Pinhook’ Paul Rescigno) for a night of drifting Block Island’s famed Southwest Ledge. The rules were simple: each team could only fish live or rubber baits for the duration of the tide, and at night’s end we would declare a winner based on number of fish boated and size of fish.

As might be expected, we didn’t have the best of nights—by Block Island standards anyway—with Team Rubber Eel landing just three bass of 36, 41 and 42 pounds, while Team Real Eel landed four bass of 37, 40, 40 and 41 pounds. Live eels had the numbers, while rubber eels had the biggest fish and the heaviest average weight (39.66 for rubber and 39.5 for live), but there was no unanimous decision as to the winner so the call was made to give it a go in two weeks when the moon came back around from full to new to see what might shake out.

On the night of the rematch Team Real Eel had to sub in Joe Bartnicki from New Jersey for Paul Rescigno due to a prior commitment, but the rest of the players remained the same. Once again the action was slow by Block Island standards, but the fish were a bit more cooperative this go-round as Team Live Eel boated a respectable catch of six striped bass over 40 pounds with the biggest going about 45-plus. They also had a handful of smaller bass mixed-in and several keeper black sea bass (maybe there’s an article in the works on nighttime sea bassing at Block Island?) Team Rubber Eel again held their own if not in total number of fish landed but in size as rubber baits accounted for three bass over 40 pounds with the biggest going an impressive 56.25 pounds according to the weight formula (length x girth²/800)!

Once again there was no unanimous decision as to the winner when we returned to the dock just as a late July sun began to leak over the horizon, but some very interesting observations were made along the way and plans were made to continue the experiment on future Block Island tides.

Team Rubber Eel almost exclusively fished 13-inch Gravity Tackle’s GT Eels. While several drifts were made with white 9-inch JoeBaggs Patriot Fish as there were squid seen on both trips, it was the rubber eel produced by Capt. Gabe Ravizza of Gravity Tackle that put the fish in the boat. All of the baits were fished on relatively light jig heads with both JoeBaggs SPJ’s and Gravity Tackle Atlas heads in sizes from 1 to 3 ounces used with 1-, 1.25- and 1.5-ounce heads being the most appropriate. Color-wise on the eels we used a variety of flavors (Plurple, Black Sapphire, Shimmering Eel, etc.) but it was the Midnight Calamari that put the biggest fish of the experiment in the boat in my 55-pounder. I teamed that purple-ish bait up with a 1.5-ounce JoeBaggs SPJ and to me it was just about the perfect combo for the conditions seen at Block on a moon tide.

For terminal gear we fished a selection of spinning tackle including the 8-foot Tsunami Carbon Shield II XH (my new favorite heavy boat spinner!!) and the 8-foot Tsunami AirWave Coastal H. The AirWave Coastal series was the predecessor to the new Carbon Shield II line of rods so it makes sense that it would work so well as they took the proven mandrels and updated the carbon and resin technology for the new rod line. When the tide was slacked off and ¾-ounce heads were all that was needed, the 7’6” Maxel Platinum Slow Pitch XH rod saw some work. We matched the 8-foot rods up with SaltX 6000 and Tsunami Evict 5000 reels (spooled with 40-pound braid), and for the shorter rod the SaltX 4000 was a great fit. Both Tommy and I had a pair of rods rigged and at the ready so that when a jig was broken off we could get back into the action quicker. Leaders were Tsunami Pro fluorocarbon in 40- and 50-pound test, and while Tommy tied direct, I used a 125-pound Tactical Anglers Power Clip to facilitate swapping of jig weights as the current speed changed.

For getting the eels down near the bottom, both guys use 3-way or T-swivels with rather short droppers down to their sinkers. I have always been amazed at the lighter weight sinkers that you can get away with when 3-waying at Block, and for the most part the live eel guys used 6- and 8-ounce cannonball sinkers, and at really slow current stages you can use 3- or 4-ounce sinkers. I have also seen simple rubber-core sinkers in the ½- to 2-ounce range used by anglers who prefer spinning gear for their eeling sticks. These are still far heavier than the 1- to 2-ounce jigs we matched up to the rubber, but in many other places on the Striper Coast one may need 10 to 15-plus ounces of lead just to tend bottom.

While there was no clear winner as determined by the pool of data collected so far this summer, some general observations and revelations were made.

First and foremost, I do not truly believe that either live or rubber eels would ever decisively ‘win’ in a long-term battle. I am sure that the traditionalists out there right now reading this are already planning to write me an email (tlapinski@thefisherman.com) to say how 99 times out of 100 live eels will produce better, falling on a long history of data to support the point, and that is just fine by me. It’s tough to argue with history, but what of all the fish being landed day in and day out in recent years on the rubber version?

Part of the success of one method over the other, I believe, can be governed by the way in which the captain positons the boat and how the anglers onboard either compensate for this or fail to do so. Take my two Block Island trips for example. The captain is a well-versed 3-wayer with more than 50 bass over 50 pounds on his boat, all falling to live baits—the author’s big bass was the first-ever 50 on an artificial. When he approached the prime piece of the reef, he stopped very short up-tide of it as the sinker he was using would quickly bring his live eel into the strike zone. However, if I simply dropped my 13-inch rubber bait on a 1.5-ounce jig down alongside his bait, I wouldn’t land anywhere near where his eel hit pay dirt. Once I realized this and how to compensate for it by purposely letting my line scope out behind the boat after casting away from the drift direction, I found success.

I also quickly learned that the captain would position his boat so that the stern would pass over the prime real estate as that is where his transducer was located (it just so happened to be where he was fishing…) This meant that if I was in the bow I needed to not only cast away from the boat when we began the drift, I also needed to aim to my right or left, depending on the drift direction and side of the boat I was fishing, to fish the same structure as he did. While this may not be all that big of a factor on a large reef with lots of feeding zones, where we were fishing in close to the island the structure is small and the prime feeding position may only be big enough for one or two fish to stage up.

Ultimately I think it comes down to a bunch of factors including time, place, angler, boat positioning and handling, water conditions, tide stage, time of season, moon phase and about 100 other different components each weighing-in on the final outcome. Add into the mix angler ability—a great live eeler does not automatically make a great artificial fisher, and vice versa—and if nothing else it comes down to what you, the angler, feels comfortable in throwing with a little bit of luck sprinkled in for good measure. If live eels are producing success for you, then keep fishing them. If rubber eels put all the fish on the deck of your boat, then by all means keep on fishing rubber! If you would like a challenge or to broaden your angling knowledge base, then keep your options open and keep on experimenting. 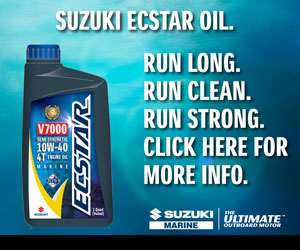 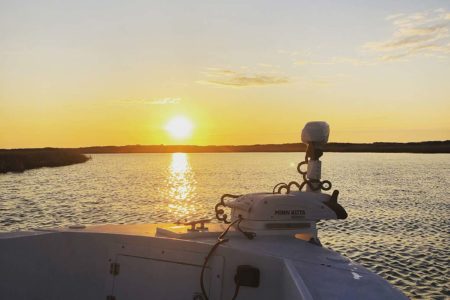 Bass In Back: Skinny Water Stripers

For those on skiffs, kayaks and smaller center consoles, this fishery belongs to you. 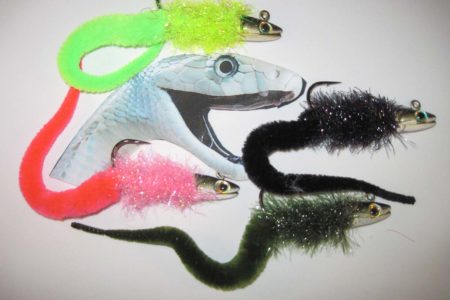 A productive pattern for both conventional and fly tackle enthusiasts. 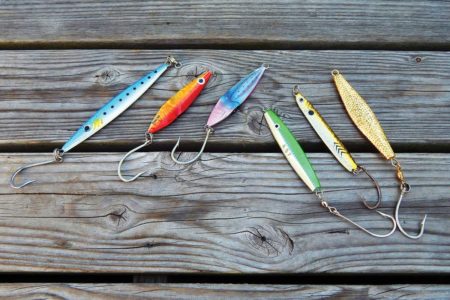 Each year is different and you have to read the signs to determine where and when the striper migration is going to happen.