There are a few creeks in my home waters in South Jersey where I love to toss poppers and soft plastics at resident stripers. At high water, the fish stack up at the mouth, feeding on a variety of bait that’s flushed off the meadows on the dropping tide. Thus far, my tactic has been to run my 204 Angler center console ahead of the creek, cut the engine, and drift past for a chance at one or two good casts; if I’m lucky, I’ll pull a fish out of the drift then motor up and around again for another shot.

A trolling motor has been on my wish list for some time now. Of course, with a 20-year old hull and similarly aged Mercury two-stroke with untold hours on the transom, there’s quite a bit of wishful thinking on that list! But the boat is perfect for the way I fish, and short of the imminent repower and potential hull upgrade down the road, a trolling motor just seemed the perfect addition to immediate overall fishability.

In recent months, we’ve shared a number of tactical “how to” articles on trolling motors and associated onboard technology (e.g., fish finders and chartplotters) geared towards improving success rates. From pinpointing tautog structure, to fighting wind against tide, even fishing tight to bridge stanchions and docks, the “luxury” of a trolling motor is quickly becoming more of a “necessity” for many local anglers.

Count me as the latest convert.

My first step in the process was talking essentials with a few Minn Kota disciples like captains Brett Taylor, Jesse Bloomquist and Nino Aversa. Each of these now fellow converts had their own unique style and challenge in installation, both Taylor and Aversa run 23-foot Parker pilothouse boats, while Bloomquist recently transitioned to a 25-foot Contender Bay Boat. Despite the difference in freeboard between the pilothouse and bay boat models, all three opted for 72-inch shafts and 112 pounds of thrust. I too opted for the Minn Kota RT Terrova with 112 pounds of thrust and 72-inch shaft.

Measuring my boat from the water line to the deck, and down to the bottom of the boat, my first thought was that a 60-inch shaft should give me the amount of clearance needed (keep in mind you need that prop down at least 12 inches into the water). However the 72-inch shaft gave me the flexibility to travel with me in any future trade-ups in boat length; and while much of my fishing is done in the back bay with less heavy current, the 112-pound thrust provides longer onwater running time. Those running in heavier current definitely need more thrust; for boats with less freeboard working calmer, shallower waters, a 60-inch shaft with 80 pounds of thrust could be plenty. 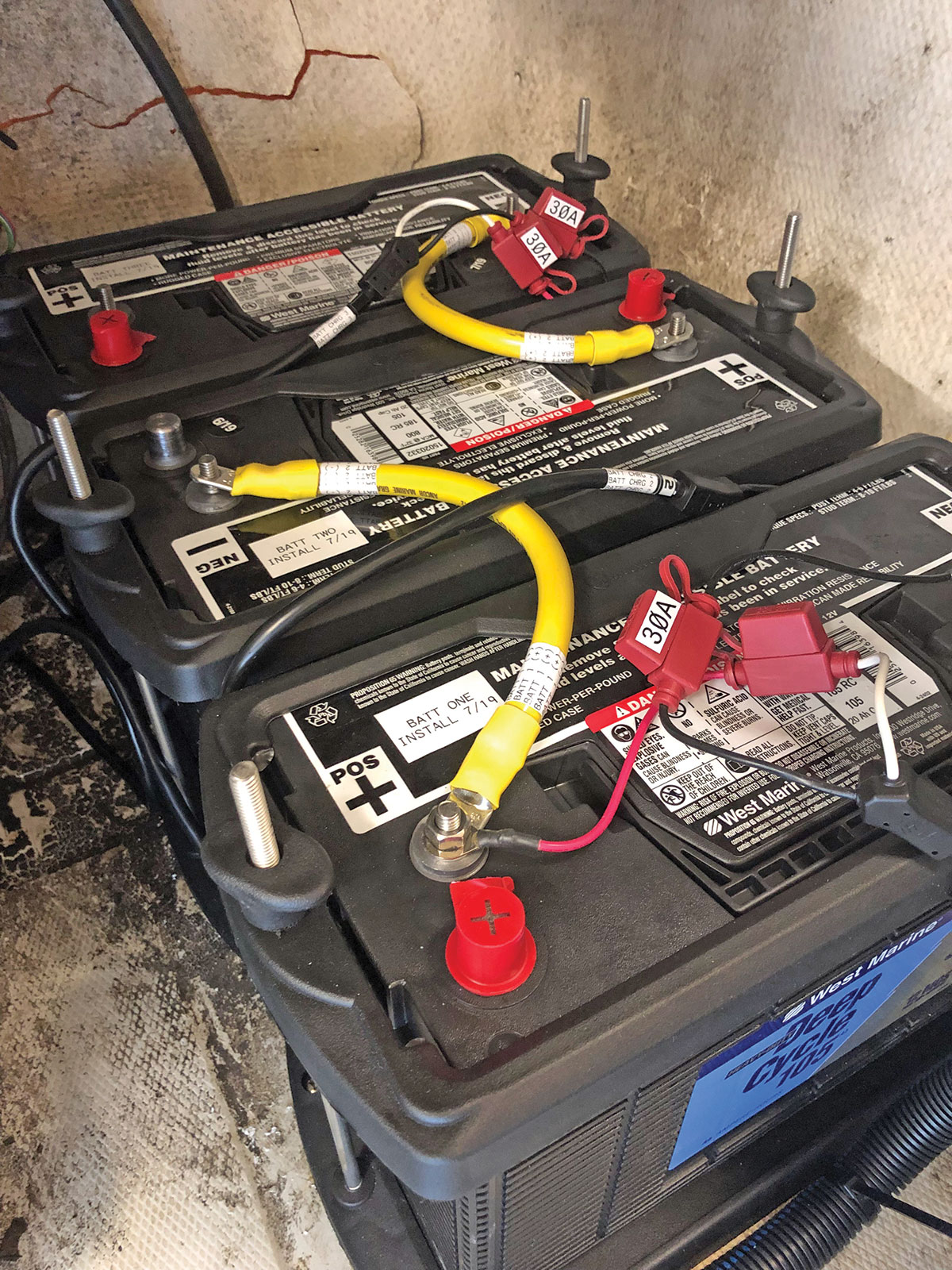 Consulting with Aaron Held at Octopus Yachts (www.octopusyachts.com) in Wall Township, NJ for project estimate and final installation, we determined the biggest concern for our install as it is with others would be the three 12-volt marine batteries wired “in series” to handle the 112 pounds of thrust (36V); roughly 150 pounds of additional onboard weight with need for dry, accessible storage. On top of the three 12V marine batteries, the need for recharge comes by way of a Minn Kota three-bank Precision Charger to keep the dedicated trolling motors powered after every trip via shore power (though a secondary option is to use the alternator power from your primary power supply). Keep in mind of course that with 80 pounds of thrust, you’ll cut overall battery weight and space given that you’ll only need 24 volts rather than 36.

After looking at the two forward hatches on my Angler 204, the crew at Octopus Yachts settled on housing inside the console under the helm station, with the batteries placed in-line in a tray on the port side under the console and, the charger mounted to a custom piece of starboard against the other wall with a MKR-19 60-amp circuit breaker, as required by American Boat and Yacht Council (ABYC). “We need overcurrent protection for this high-draw device,” Held said of the unit, which ultimately was installed next to the charger on the same piece of marine starboard material.

In figuring on the installation, those comfortable with drilling, patching, wiring and electrical can follow the Minn Kota manual for installing the unit. But using a custom-install operation like Octopus Yachts can be clutch when it comes to clean and seamless integration. Held’s New Jersey operation uses an onsite CNC machine to customize pieces of marine starboard material that could become essential to mounting challenges. For example, by using marine starboard inside the console for the recharge mount and also as the bow pulpit for the motor mount itself provides better stability and also lets me take the major components with me should I ever choose to sell what’s now a boat that’s fully-wired and prepped for a trolling motor.

With portability in mind, a nice to have addition is the Minn Kota Composite Quick Release Bracket, which mounts to the bow pulpit and allows the Minn Kota to be easily pulled from the boat should I want additional forward space for a fun day with the family or winter storage. Because of the front deck space in the bow, a separate piece of starboard was also required there to provide room for the shaft to extend out past the rub rail when deployed. This is also where a qualified installer comes in handy.

Ultimately, Octopus Yachts removed the front cleat to lay the top-deck starboard where the quick release bracket was placed, with another piece of starboard mounted just below the deck for improved stability. The cleat was then reattached and sandwiched between the top and bottom pieces of 3/4-inch starboard. “That bow pulpit supports the trolling motor and is through-bolted to the deck,” explained Held.

To link up the forward motor to the console batteries, six-gauge wiring was sent through fresh cut access holes in the fiberglass (First new boat smell there in quite a few years.) with pie plates and clam shells sealed with silicon at the junction points to keep out water. The wires ultimately terminate through a Marinco quick-disconnect plug that’s rated up to 70 amps, which allows the trolling motor to be quickly connected and disconnected. To further accommodate deck space, Octopus removed the bow rail and capped the holes with custom starboard with self-tapping screws sealed with silicone.

Depending on an angler’s personal needs, the bow rail does not necessarily have to come off as I learned from others. “We wanted to get right in line with that bow rail so that it wouldn’t hit,” Aversa told me later of his particular Parker project, calling it a “neat, kind of a backyard project” that used half-inch aluminum as a base to accommodate the Parker’s rail. Crediting Capt. BJ Silvia of Flippin Out Fishing Charters out of Rhode Island with the concept, Capt. Aversa said he first mocked out the Minn Kota extension with plywood and a broom to figure out where the shaft would fall.

Given the design of a pilothouse or walkaround model essentially requires the rail to be kept in place, creativity comes into play. “I know of folks who’ve actually sawzalled an open portion of the rail to accommodate the Minn Kota,” Aversa said.

A heading sensor for the auto-pilot, included in the package, was mounted on the console and run separately to the boat’s primary electrical system. That sensor along with i-Pilot package including wiring to the Marinco plug into the bow socket will run you about $2,100 for manually-deployed Minn Kota Riptide Terrova 112 Bow-Mount Trolling Motor. The similar Ulterra model can be automatically deployed from the i-Pilot remote, which adds another $500 to the package price.

With the Quick Release Bracket ($200), circuit breaker ($40), three-bank 30-amp charger ($280) and three 12V marine batteries ($150 each) you’re looking at roughly $3K for a starting price. Nice additions include an $85 Minn Kota stabilizer kit for keeping the motor in place along the gunnel while running your primary engine source, and also a second Bluetooth enabled i-Pilot Micro Remote ($120) so that one can be secured around your neck and another kept in the console for a fishing buddy to operate while you’re buttoned up to a good fish.

The boat was out of the water for a week (luckily for me during the hottest stretch of mid-July weather we’ve had in a few years; good time for an air-conditioned workshop). Total man hours spent on the install was 14 hours ($1,900), with another 4 hours ($540) on the custom starboard, plus wiring, screws and other installation bits and pieces “I would plan on about a week of time to do the install, give or take, actual time on the boat may be less may be more,” Held said of the process, while adding “A mechanically inclined person could definitely do a nice install but I would always recommend consulting with a marine electrical professional because there are a lot of different aspects that need to be taken into account to get a successful install.”

Like many anglers, I’d read a lot about the effectiveness of utilizing a trolling motor; back in 2015 while trolling motoring along the sedges for striped bass, I’d experienced the benefits first hand, slow-trolling the sedges and quietly locking in on locations where stripers were staged. The toughest hurdle going from “wish list” to “project list” was the actual menu of costs and considerations. Having gone through the actual project with the professionals at Octopus Yachts, I thought this overall project summary might make the process easier for others looking to convert over to a trolling motor.

After getting a couple of other summer maintenance items completed at the marina, the shaft of the Minn Kota Terrova finally slid into my home waters about a week after the initial project haul-out. Spot-locking on a little snag out back along the sedges, it took about 5 minutes before a chunky little triggerfish piled on a crab jig tipped with blue crab; a few undersized tautog were then released to fight another day. It took another trip or two to get a better handle on the gamer-style remote controls around my neck, but I’m really looking forward to trolling those sedges later this month for stripers as the temperatures begin to fall. The word “game-changer” has been so often used to describe the trolling motor; that’s not a cliché, I really get that now!

I did a 25-minute project overview on video that’s posted at TheFisherman.com under our Features section of the website (Video Library). Check it out to learn more and feel free to email me any questions at jhutchinson@thefisherman.com.