A look at northeast party boat tuna fishing for beginners, from a beginner.

Tuna fishing in the canyons of the Northeast offers world-class fishing right in our own backyard. However, given the dangers and costs of traveling offshore, canyon fishing is out of reach for many fishermen. That said, a party boat trip is a great way to reach the canyons for a shot at a fish of a lifetime without breaking the bank. Last fall I took the plunge and booked my first canyon trip, and while my research started months before the trip, once I was on the water I quickly learned there is no replacement for firsthand experience and so I want to share what I learned.

The canyons lie along the continental shelf where warm currents collide with the canyon walls and create a congregation of nutrients and bait that attract pelagic predators. The target species include yellowfin, albacore, bigeye and bluefin tuna, as well as mahi mahi, and even swordfish. Most fish will be under 100 pounds, but there is potential for much larger fish; bigeye can reach 300-plus pounds and represent the ultimate challenge to land from a party boat!

Generally you can expect at least a five- to seven-hour ride out to the canyons. The boat may spend some time trolling on the way out, but the focal point is often the overnight chunk bite, which is much more conducive to party boat style fishing. When chunking, the mates toss a steady stream of butterfish chunks to attract tuna and get them feeding around the boat. Anglers use butterfish as bait and try to position their hooked baits in the stream of chunks so a tuna can intercept the bait while eating freebies.

The two most common trip formats are the 22-hour trip, which focuses on the overnight chunking bite and the 30- to 36-hour trip, which allows time to hunt for mahi mahi that congregate around lobster pot buoys. On average the cost for these trips ranges from $325 to $450 for the 22- and 30-hour trips respectively.

Party boat chunking season usually begins in late August and runs into early November. Weather is a major factor in determining if a boat will sail, and generally boats will not sail when winds are above 25 mph. When planning a trip be sure to identify multiple dates that you could potentially go in the event that your trip gets cancelled. It is a good idea to try and book in advance since most trips carry less than 30 people and can fill up quickly.

As a beginner to this fishery, I found the step up in gear budget and the decisions on what was actually necessary to be the most daunting part of planning my first trip, particularly for gear I may only use once a year. It’s best to relax and realize there is a lot of affordable tackle, including boat rental gear, which can get the job done without breaking the bank. Dropping a bunch of money on gear before even hitting the water can add pressure and take away from the enjoyment of the trip. If you find that you enjoy the canyon experience it may be worth investing in higher-end equipment down the road.

The primary chunking outfit will be a stout conventional rod in the 6- to 7-foot range rated for 80-pound test paired with a reel capable of holding at minimum 350 yards of 80-pound mono. While tuna can be landed on lighter line, 80-pound is the standard due to the abrasion resistance and the extra pressure that can be applied with the heavier line.

On party boats mono is still the law of the land; every boat that I researched did not permit the use of braid for chunking due to the difficulty of dealing with braid tangles while a tuna is pulling on the other end. Braid can be used while jigging or as backing when chunking with a 200-yard top-shot of mono and is a great insurance policy if a larger fish is hooked.

A chunking rig consists of a hook, around 6 feet of leader material, a swivel, and a weight to get the bait down to the strike zone. Fluorocarbon leaders from 40- to 80-pound test are commonly used; lighter leaders can be the key to getting bit during the daytime when fish are more line-shy. Most boats provide hooks, swivels and monofilament leader. I would recommend bringing your own fluorocarbon and a selection of sinkers ranging from 3/8 up to 10 ounces. A weightless chunk free-lined off the back of the boat can also be a deadly technique as it drifts more naturally and can trigger a bite when the tuna are picky.

Tuna have keen eyesight and will gladly eat the freely-floating chunks thrown by mates while ignoring hooked baits. For a more natural presentation the hook is threaded through the mouth of the bait and hidden in the body cavity such that only the leader is visible. This is harder than it sounds so do not be afraid to ask the mates for help!

Most of the time baits will be placed around 100 feet down, however the captain will call out the depth that fish are being marked. To match the slow descent of the chum pieces, the chunk presentation is slowly lowered to depth by taking measured pulls of line from the reel. To ensure your bait is at the proper depth, place a piece of tape 1 foot from your reel and just count the number of pulls of line. If a tuna takes your bait it will not be subtle, give them a slow three count before putting the reel into gear and just start winding until the hook is set; then hang on for the ride!

Jigs are another great way to catch tuna, particularly if fish are schooled-up under the boat. Hammered diamond jigs in the 6- to 8-ounce range are standard, but colored sardine-shaped jigs are also very effective. The jigs are lowered to the target depth and then worked up and down with sharp sweeps of the rod tip. Jigging occurs up near the bow or on the up-current side of the boat. Braid is typically permitted to be used for jigging, which allows smaller, light-weight reels to be used. Your jig reel should be able to hold around 400 yards of 65- to 80-pound test braid. Similar to chunking, depth control is critical. I highly recommend purchasing one of the lines that change color every 10 feet or marking your line with a permanent marker at known increments. For example, when the captain is calling out fish at 80 feet, you want to be confident your jig is at the right depth.

The longer, 30-plus-hour trips spend the afternoon looking for mahi before switching over to tuna chunking in the evening. Beginners should book a trip that includes time looking for mahi as they are much more reliable than tuna and an absolute blast to catch. An afternoon spent catching mahi will provide a great offshore experience before you even start tuna fishing. The action can be fast and furious at times, and it is an extremely visual fishing experience. The water in the canyons is gin clear and it just doesn’t get any better than watching a 20-pound mahi charge and inhale your bait, flash their trademark vibrant colors and take off peeling drag. The fish range in size from 2-pound chickens to 30-plus-pound bulls and are caught by casting chunk baits or artificials to lobster pot buoys of which they congregate beneath. A medium spinning rod spooled with 30-pound braid and a 40-pound fluorocarbon leader is all that is necessary.

The specter of squid looms large over a canyon trip; they are simultaneously cursed as relentless bait thieves and revered as the very best bait to catch tuna. Squid are drawn to the boat’s lights and can be seen cruising the surface but are also prevalent at greater depths. A light spinning rod with a squid jig is absolutely essential. If you aren’t seeing numbers of squid near the surface don’t be afraid to tie a sinker below your squid jig and drop it deep; on my trip squid were being caught at will by dropping jigs as deep as 300 feet!

Listen to the mates, talk to the mates, and learn from the mates. These guys are on the boat every trip, have seen what works and are a tremendous resource. I can’t emphasize enough how much I learned from talking to the mates; do not worry about your ego and make sure to ask them for help and tip them for all of their hard work.

Controlling expectations and remaining positive really makes the difference in enjoying a trip, particularly when fishing is slow. The trip I went on was slow; there were five tuna caught by 26 anglers over 15 hours of tuna fishing. It was 12 long hours before a fish was hooked, and then all five fish were hooked within 30 seconds. It was a long, slow night fishing, and a lot of guys mailed it in and went to bed. The group of anglers who caught fish included experienced regulars and total beginners using rental gear, but they all had one thing in common: they were at the rail and their lines were in the water even though the fishing was tough!

I learned that the canyon fishing experience is so much more than just catching a tuna. I saw and caught species of fish I had only read about, marveled at cobalt blue waters, and felt the camaraderie of fishing offshore. If you are looking for a new fishing adventure this season, gear up and go offshore! 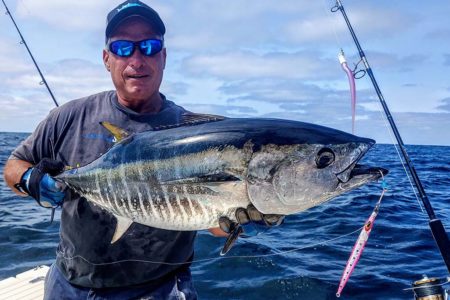