A native of New Jersey, this taxonomic relict dates back to 250 million years.

I must admit, as a kid I enjoyed playing in the mud with my older brother way too much.  Little did I know, that as an adult I would find myself still reveling in that joyous childhood pleasure.

Ironically, some of my favorite fishing adventures occur in the muddiest and swampiest places that I could explore here in South Jersey. Previously, I had become quite addicted to catching monster northern snakeheads.  At the time I never thought that I would find another species that would match that kind of adrenaline rush or that would thrive in such a murky, mysterious environment.

It’s a fish with as many monikers as Satan himself, and a hell-raising disposition to match. Mudfish, mud pike, dogfish, grinnel, and cypress trout, are just some of the names they are known as in different parts of the country. I had heard of them as bowfin, but never once encountered these singular beasts even though they were surely in some of the waterways where I had cast my line many times over when scouting for other, more familiar species.

It just goes to show that they have a knack for hiding in plain sight.

Where one might be inclined to cast far out in open water, bowfin could be lingering on the shallow bank underbrush submerged in the muck right at your feet. This king of the swamp really knows how to get down and dirty. Perhaps that is how they have survived for millions of years, because of their amazing ability to lay low. 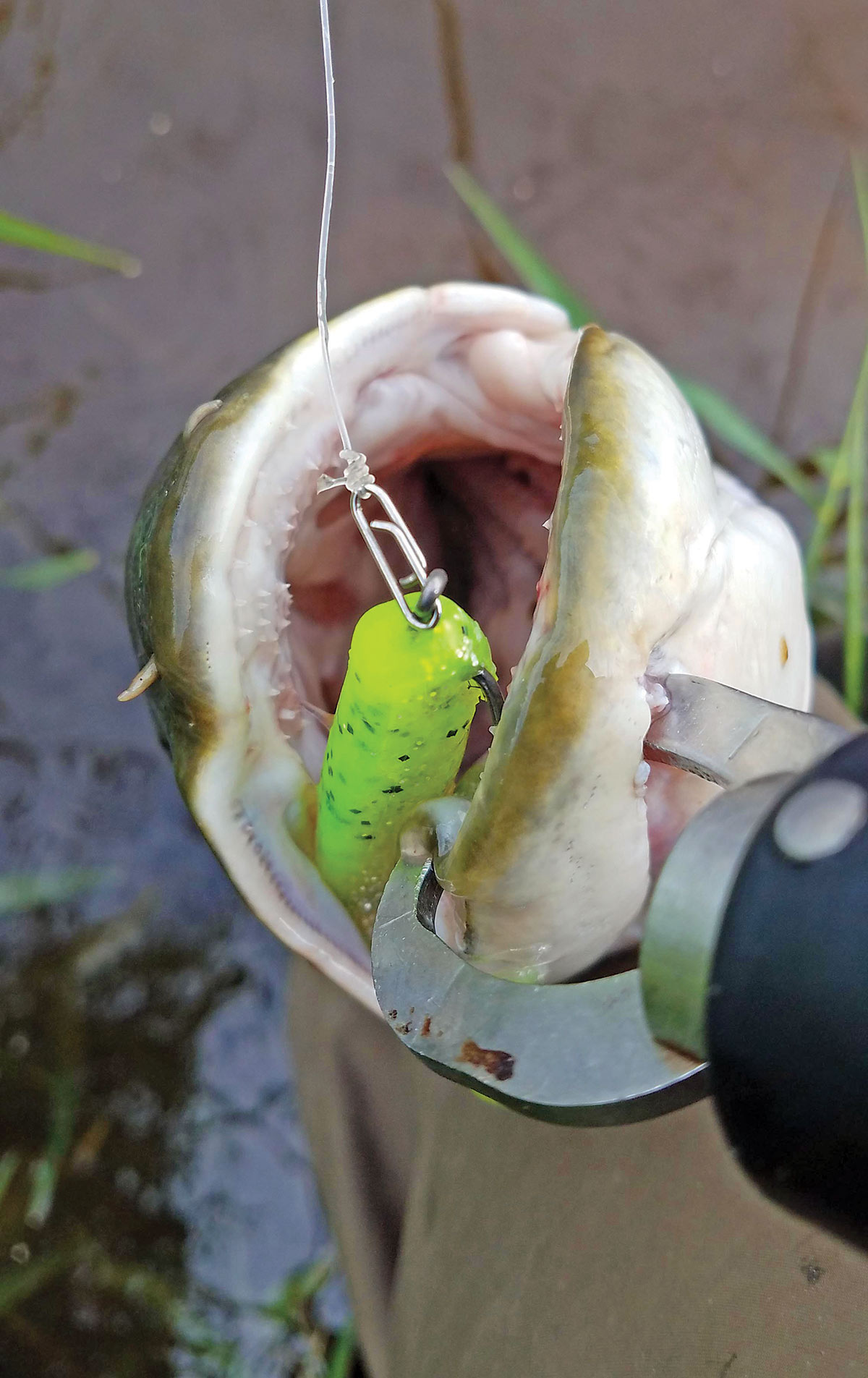 Amia calva, yet another more formal name, date way back to the Jurassic period and their fossils have indicated that they were once widespread across North and South America, Europe, Asia, and Africa. These fish are the only surviving member of a prehistoric family of fish known as the order Amliformes. They are thought of as a highly-evolved primitive fish given that they’ve not changed much from their earliest ancestors. I’d say they must have gotten something right to have outlasted the dinosaurs. Today their population is not as widespread as it once was and is limited to the eastern part of the United States, Southern Canada, and several rivers flowing from the Eastern Seaboard or Gulf of Mexico.

Bowfin are related to gar and share their fantastic trait of being air breathers. A swim bladder serves as both a float for buoyancy and as a crude lung. The primitive lung makes it possible for bowfin to survive in poorly oxygenated water and also helps them endure extended periods of time out of the water. Another species that shares this same quality is the snakehead, a fish often confused with the bowfin in appearance. But bowfin are native to our area and have been for millions of years, where the northern snakehead is believed to have been introduced in the past decade or so.

Bowfin have gotten a bad reputation for allegedly having a negative impact on the environment. It is feared by some that the aggressive fish take over waterways and devour popular gamefish or simply out-compete them for food stunting their populations. It seems strange to be thinking this of a fish that has been here for millions of years. The developing attitude towards these fish is similar to the truly invasive snakehead. Perhaps their all too similar traits are responsible for this shift in opinion.

We ourselves are not without blame for having a negative impact on the environment. The use of herbicides to clear vegetation for boats could pose just as much of a threat to the habitats of juvenile fish. Still, there are some studies that have been positive for this species, pointing out that bowfin are actually indicative of a thriving habitat.

These fish spawn in early spring or early summer, typically when the water temperatures reach a steady 60 to 65 degrees. This is the very best time to catch them in numbers. The males make the spawning beds over sand bars, under stumps, logs or bushes in depths of up to 3 feet of water. The males also sport a vibrant lime green coloration on their fins, underbelly, and on the inside of their mouths at this time. The females can produce up to 5,000 eggs, which the males will guard until the fry reach about 2 to 3 inches in length.

These cylindrical fish are ambush predators and can be caught on many of the same lures and baits used for bass. The gear that I use does not differ from anything that I would use for bass fishing. You can use either a spinning or a casting rod. I use a sturdy 6-1/2-foot medium/heavy spinning rod loaded with 30-pound braid. Braid is a must because these fish have very sharp teeth. In fact, you could find using a wire leader to be a wise choice. I just check my line for frays after I catch a couple, and if the line looks sketchy I re-tie lures or hooks as needed.

I prefer to use a reel that is sealed such as the Penn Fierce 3000 spinning reel because it doesn’t mind getting dirty or being beat on by these beastly fish. A strong super line 4/0 hook is definitely necessary when you are using bait. These bruisers can easily bend a standard hook wide open.  Using cut bait has no doubt been my most successful choice for catching bowfin. It is said that their sense of smell is much greater than their sight, makes sense for a fish that thrives in stained water. I have also used shrimp and imitation crab meat with great success.  When fishing cut or live bait I prefer to attach a bobber, but you certainly could fish bottom on the same rig you would use for catfish.

I find the bobber method to be more productive because you really know the moment they take the bait. Give them a few seconds swimming with it and hit them hard on the hookset. Their heads are extremely bony, and you have to really sink that hook to keep them on.

One major thing I have noticed when fishing for bowfin is that they do not spook as easily as your typical gamefish. I don’t know if it is because of their temperament, the spawn, or simply that they are not as targeted as other more sought after fish. It is pretty awesome though. So if you miss a fish on a cast, don’t worry. Let the bait sit for a minute or recast it back out to the same spot. Most of the bowfin that I have encountered have hit again, multiple times.

As far as lures, top water frogs and spinners have worked for me. The level of vegetation usually dictates which one is the better choice. Work the banks, around stumps, or under bushes. Often you will see a v-shaped wake come charging your lure.

Their ability to breathe air is very useful in the heat of summer when oxygen levels are low in the water. When they need to replenish their oxygen, they surface, release depleted oxygen through their gills and gulp a fresh supply of air through their mouths. It is a telltale sign as to where they are, so when you see a swirl cast a little past it and reel in. Jigging is also a good method to entice a bite.

Some people consider this species to be a “trash fish” but they can give a better fight than many of the popular gamefish.  Pound-for-pound these fish are one of the most extreme fighters I have hooked in freshwater. I can definitely understand how someone might get annoyed if they aren’t expecting this kind of bite. Bowfin can really mangle your favorite lure or snap it off altogether.

The intense tug of war that ensues after hooking into one of these prehistoric beasts reminds me of the fierce battle that you would get with a northern snakehead. The sheer power of this predator is amazing and they never seem to tire. Both fish are agile as they torpedo through the water on the other end of your line. Snakeheads  seem to be more acrobatic and can leap out of the water trying to throw the hook, whereas bowfin tend to have a more bulldog approach and dig straight for the sanctity of the bottom or underbrush to escape. You will have to play these fish diligently to land them, but as you pull them in you will see that they just don’t stop trying to free themselves. They often go into a death roll much like a crocodile.

Removing the hook from these toothy critters can be intimidating. A lip gripper and pliers are must have gear to get the job done. They tend to continue to thrash violently on the gripper; safely lay them down to avoid hurting them or yourself. Catch, photo, and release them as quickly as possible so you can get back out there and catch another. Most likely there will be more fish in the vicinity.

If you don’t have any idea where to begin to locate populations of these fish, take a little time and scout some swampy tidal waterways that you may have bypassed for the beaten path. They prefer well vegetated areas with little or no current. You may find yourself catching northern snakeheads in these same areas as well. Make your own adventure and find those hidden living fossils.

These prehistoric fish are a must catch for any avid fisherman; add them to your list. You might get a little dirty, but you’ll have so much fun doing it.