The shoal will draw Delaware anglers – and sometimes folks from the Jersey side – during the black drum run in the spring as the big fish stage for the spawn and look for food along the bottom.  Most of the larger drum are females and should be released while the smaller males not only taste better, they have fewer parasitic worms in the tail flesh.

Black drum fishing has remained reasonably steady in Delaware Bay for many years.  When I was a boy in the 1940s and ‘50s my neighbor in Claymont, Mr. Cannon, would fish for them every spring and nail the fish to a big board then scale them with a garden hoe.  In those days the biggest fish I caught were mud suckers out of the Brandywine Creek so you can imagine how impressive those 50- and 60-pound drum looked. 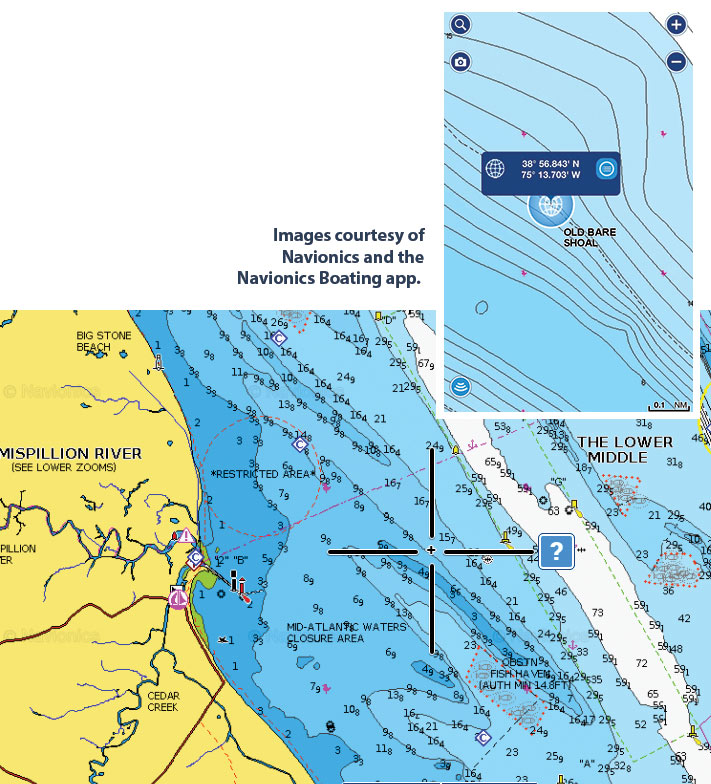 Paul Coffin and I went drum fishing once in the 1970s in his 22-foot Mako.  We anchored up somewhere near Old Bare Shoal, caught a 60-pounder, broke the fish box trying to put it in and then had the Devil’s own time trying to clean the fish.  Every big black drum I have caught since then has been released, though I do keep the smaller fish, and they eat great.

When seeking black drum you should use heavy tackle.  I use 30-pound gear and keep the drag cranked down tight.  These are powerful fish and can take a lot of line, which would be okay if you had the entire bay to yourself, but on most nights you will be surrounded by other boats.  In addition, there will be anchor lines, yours and the other boats, to consider.  This is why you want to control your fish as much as possible.

Terminal tackle is pretty straight forward.  A fish-finder rig made with 80-pound mono leader.  I use 10 to 12 inches of leader since I don’t have to cast the rig and the scales of a big drum are like armor plate.  A 10/0 to 12/0 circle hook will work just fine.

The bait is either a whole clam or crab.  If you use a blue crab make sure it is legal size.  Drop the baited rig off the stern and let the current carry it back behind the boat.

At this point set the rod in a holder and put the reel in free-spool with the click on.  When a fish picks up the bait engage the drag and when the line comes tight the fish should be hooked.  There are other critters about such as dog fish and rays that also enjoy a nice juicy clam.  These fish can be a pain in the neck, but if you use live crabs it will discourage them from taking the bait.

Almost all of the drum fishing in Delaware Bay is done after dark.  Boats out of Delaware leave Lewes and Slaughter Beach a few hours before sundown so they can be setup on their chosen location well before dark.  One of the more popular spots is the north end of the Broadkill Slough where Old Bare Shoal drops from 3 to 23 feet.  Drum moving up the slough encounter the sudden shallow water and bunch up, or so the theory goes.

The Coral Beds (38 53.945N / 75 14.762W) are just to the west of Old Bare Shoal, and this is a very popular drum fishing location. On a calm night it looks like a small city has sprung up there.  Quite often all this activity spooks the drum, and the much quieter area around Old Bare Shoal the Broadkill Slough will prove productive.

A word or two of warning.  Springtime thunderstorms are a common occurrence.  They come up unannounced and play havoc with small boats as well as big ones.  Keep an eye to the sky.