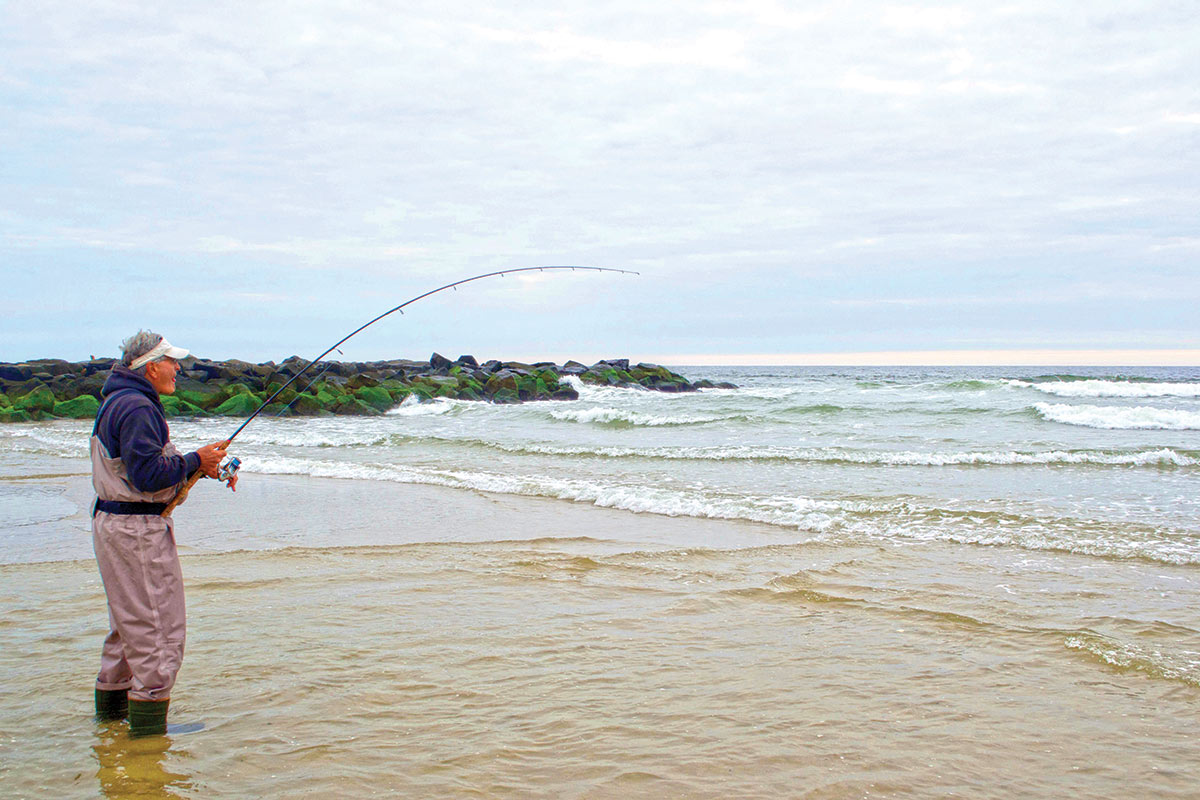 Sand fleas, aka mole crabs, can work magic on stripers as spring fades to summer along the Striper Coast.

Catching striped bass in the surf during the summer can be a real challenge, but anglers who put aside their desire to catch stripers on lures when there are no forage fish around can score regularly in the simplest fashion by giving bass what they feed on every day under those circumstances—sand fleas.Not only can that sport be enjoyed pretty much at your leisure, but there’s little expense or preparation required as the bait is at your feet and free for the taking.

I first became familiar with sand fleas as a youngster on Long Island playing in the wet sand at Jones Beach during daily trips with my mother. There were plenty of those tiny creatures in the wash, but I never thought of them as bait even after I started surf fishing with a conventional boat rod outfit, walking out as far as possible to make a cast before walking back while taking out the inevitable backlash and hoping that my soft bait (bloodworms, shrimp, squid) hadn’t been cleaned off by a blowfish or kingfish.

Actually, sand fleas are properly known as mole crabs, with many species found in various surf areas throughout the world. As I later found, the use of them as bait was well-established along Florida’s shores as they are a favorite of the prized pompano. Hundreds of surfcasters fish along the East Coast with very long rods required for long casts to the outer reef after which they are set in sand spikes so more rods can be deployed while the hard-hitting pompano hook themselves. Yet, while many northern anglers participate in that sand flea fishery in Florida, it’s only recently that the use of sand fleas further north became popular even though stripers caught in the surf during the summer almost always have sand fleas in their stomachs.

Surf fishing with shedder calico crabs had been popular along the northern Jersey Shore, Long Island’s South Shore, and along some of southern New England’s sandy beachesmany years ago, but the few old-timers who specialized in that sport have been dying off, and the younger generations haven’t been up to the work of raking calicos and setting garage facilities to hold the crabs until they’re ready for bait as shedders. It wasn’t until Mickey Sweeney started sand flea fishing that it started catching on after that regular at Castaway’s Tackle in Point Pleasant started catching and releasing lots of stripers during the dog days of summer when no one else could get a hit.Sweeney relocated to South Carolina a couple of years ago, but some of his fellow Spring Lake Live Liners club members adopted the technique.

Jim Louro of Spring Lake quickly became enthusiastic about the sand flea fishery after taking his family to the beach during the middle of the day and watching school stripers feeding in the clear waters by butting their heads in sand ridges at the drop-off in order to chase out the sand fleas. Those bass frequently develop red marks on their “noses” from such feeding.

Louro and Vinny D’Anton put in their share of time the last two summers and have had good success. Though fishing seems to be best early and late in the day, plenty of bass were caught in the middle of the day, as the major problem seemed to be having to leave some beaches to the swimmers after 9 a.m. Vinny started fishing sand fleas at Spring Lake, NJ last year on May 31 and was quickly into good numbers of stripers up to 38inches. He even got lucky while fishing the fleas one morning when fish started swirling on the surface. A switch to a Storm Searchbait produced some unexpected, but solid lure action. While the sand flea bite slowed in the fall, a few anglers went back to it and did well when there was a lack of bait in the surf. There are times when it seems slow, but at other times it’s surprising to find out that there are a lot of bass we never thought were there, until making the switch to sand fleas.

Harvesting the bait is the first order of business. The ideal method is to use a rake such as those employed by pompano anglers. These may be impossible to find in the north, but can easily be mail-ordered. Though a large quantity of sand fleas isn’t necessary, it’s best to accumulate a couple of dozen in a bucket with some water so you’ll have them if a bite develops. That’s usually not a problem, but it can be wet work if there’s a swell. Some pros walk the beach and use a small scoop to get what they need to re-bait as needed. If there are some kids around, it may pay to offer a few dollars in ice cream money for themto catch the bait for you.

A basic hi-lo rig works well. Louro and I prefer circle hooks in the 5/0 range. Fill the hooks with sand fleas (usually two to three) and cast out to cuts in the bars where there’s wave action and current.  Bass are often hooked in such shallow waters that they pop right to the surface on the strike. Small sinkers are best as some movement isn’t a problem. Indeed, some anglers do very well with a single leader rig drifted with only a tiny split shot. This is an evolving sport, so keep an open mind and don’t hesitate to experiment.

We didn’t have much problem with other species last year, but there is an occasional skate or fluke. Crabs also eat sand fleas, so it’s necessary to check lines regularly to be sure you’re not just fishing with shells.

Most of the stripers caught in this fashion will be schoolies, but bass over 28 inches are common, and 20-pounders are good possibilities. This isn’t a good way to catch a “50,” but that doesn’t mean they won’t feed on sand fleas when nothing else is available. I suspect that trophy stripers just aren’t likely to be in the summer surf unless there are bunker present to attract the big girls. Memorial Day weekend is the unofficial start of summer. It’s also time to start taking advantage of this cost-free, effective and under-utilized striped bass bait.