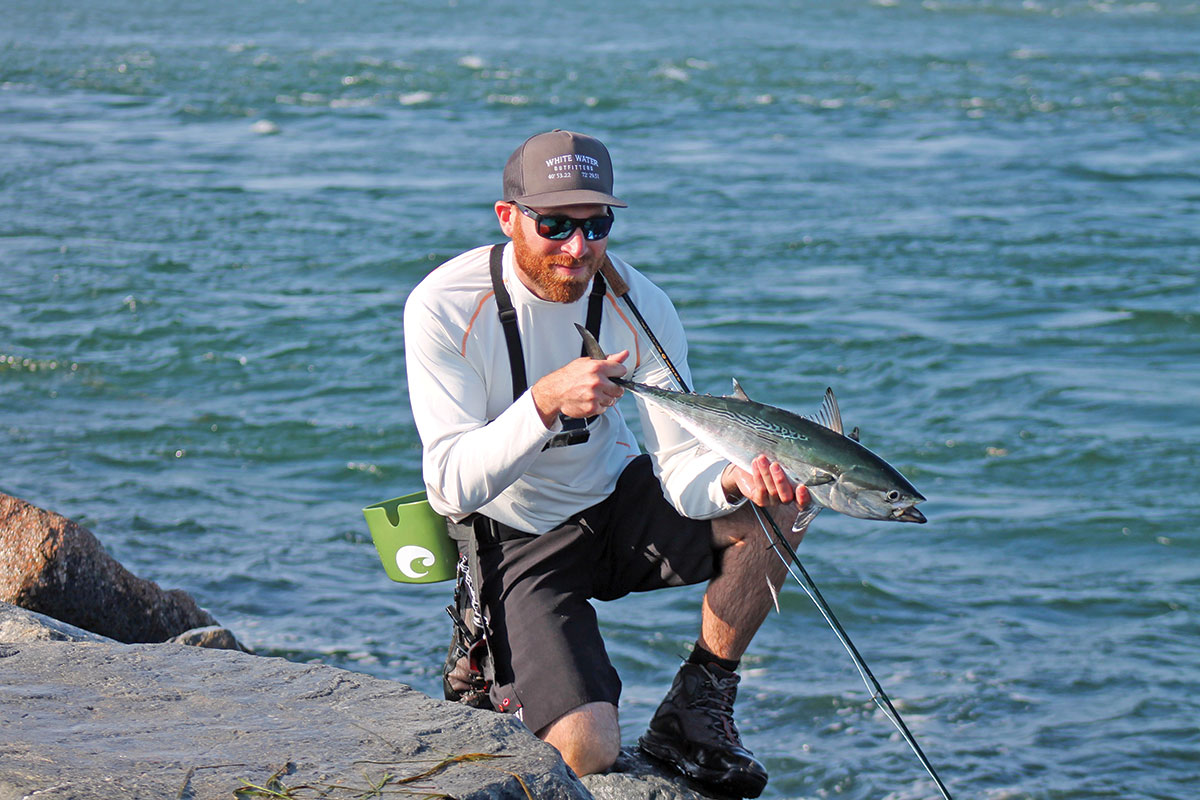 There was a time many years ago, when false albacore were a virtually untapped surf fishing resource. Some incidental and accidental landings were made but they were few-and-far between, and those catches were often dismissed as trash fish. Eventually, saltwater anglers learned to tap into the fierce fighting ability and remarkable speed of albies.

Today, false albacore are the fish that dreams and fantasies are made of, especially in the surf. Once bitten by the albie bug, anglers get hopelessly addicted to seeking them out. There is no cure for the ailment other than getting an annual fix in landing new fish.

I pioneered targeting these southern speedsters in the North Jersey surf years ago. My first hook-up and landing in the Sandy Hook surf was an amazing adrenaline high. That first catch led to several more in the following days. I quickly became hooked on these exotic fish that demonstrated blinding speed, explosive strikes, sizzling run-offs, and fantastic fights. Most of my fellow surf anglers were awed at what they saw and wanted to get in on the action, too. Feature articles that I and other writers had published in the weeks and months thereafter ignited tremendous interest in the species, and an increasing numbers of surfcasters became passionate falsie groupies. Since that first fall albacore run years ago, much has changed about targeting this extraordinary species – but some things have remained the same.

Perhaps the biggest change from when the resource was first being accessed is that many more anglers have become albacore addicts. Pound-for-pound, there is not another fish in the menu of surf species that matches the fighting ability, bursts of speed, and sheer strength that these southern speedsters present. Even though they are considered celebrities in the surf fishing community, it is an immense task to actually hook one of them. Despite the huge challenge, the false albacore fan club continues to grow every new season.

One extremely aggravating feature of targeting false albacore is that their availability each year is very fickle and unpredictable. Some years, they show up in good numbers virtually everywhere; some seasons, they thrill boat anglers offshore but bypass the surf almost completely; some years, they just are not seen anywhere. Anyone in the hunt for surf albacore has to accept this reality.

The albacore run used to start in late September and end in mid-October. That is still pretty much the case but fish are sometimes caught earlier, and sometimes later. Once the run begins and fish have been landed, the best tactics remain the same from years earlier. Blind-casting always seems to catch more fish than spot-casting to feeding fish. When to work lures for surf albacore also remains constant: The best time to hook up is at first light and thereafter but spot catches during the peak of the run can occur at any time.

The most popular metal lures to toss and work for albacore have always had slender profiles that imitate the small baitfish the “Fat Alberts” most often feed on, and lures with enough weight to be cast far offshore to where the fish may be feeding. Favorite lures from years ago were 007 and A17 diamond jigs, Deadly Dicks, the Mann-O-Lure and Swedish Pimple, Crippled Herring, Gibbs Minnow, and other classics with slender profiles. Those early lures featured bodies with a lot of chrome but with very few colorful or lifelike finishes.

Although lures that caught falsies years ago still catch their share of fish, newcomers have entered the fray. Many new lures on the market have the profile and weight needed for convincing presentations plus amazing finishes; they look like real baitfish. For example, Hogy Epoxy Jigs have exploded in popularity because of their slender profile, great casting aerodynamics, and epoxy lifelike finishes. They come in different sizes and in a rainbow of colors. Many other new lures with painted and high-tech appearances continue to give surfcasters more options in their albacore lure arsenal. Whatever lures are chosen should be direct-tie models because snaps and swivels do not pass the sight test that these speedsters possess when scanning potential targets.

Soft plastics have also become increasingly popular with surfcasters because their action and appearance often appeal to feeding albacore; plugs with the desired slender profiles like mini-needlefish are also catching fish. Saltwater flies are the choice of some anglers because they closely replicate small baitfish profiles. Those flies can be presented using fly-casting gear but there are other options to do so. Using a teaser rig works but one of the newest unorthodox techniques is use a metal lure to present the fly. It involves attaching a fly or a small metal like a tiny Swedish Pimple to one end of a 20-inch length of fluorocarbon leader and attaching the other end of the leader to a metal lure with its rear treble removed. The jig provides the distance needed, while the fly or tiny jig presents the desired profile.

The need for more natural-looking presentations today is critical. Albacore are almost always looking up while hunting for nourishment so the need to keep your offering high in the water column is critical. Lures that slice through the water on or near the surface get the most strikes. However, even normally deep swimming lures can be worked on the surface by lifting your rod tip and increasing the retrieve speed. Using a splash-and-slash technique to make lures skip along on the surface after the lure hits the water is also worth a try. This involves closing the bail just before the lure hits the water and retrieving the lure at breakneck speed back to the beach. Both the initial splash and the ensuing surface action will attract an albie’s attention. Whatever tactic you use, the need for extreme speed in your retrieval is almost always the key to a strike.

Tackle requirements remain constant. Use rods and reels light enough in weight to be kind to your body – since repetitive blind-casting can be laborious – but strong enough to handle anything that you hook up with. Reels must be capable of long casts and speedy retrieves. Braided line provides more strength and additional distance but I still prefer mono since it is less visible to the keen eyesight of albies and its stretch-ability puts less stress on your rod and reel. Fluorocarbon shock leaders are a must.

Surf albacore can be caught just about anywhere up and down our Atlantic shoreline. In recent years, there have even been catches in Raritan Bay, inside popular inlets, and other backwaters. However, one constant is that Sandy Hook remains Albacore Alley during the fall run. The Hook’s Rip at the Tip is ground zero if you want to have the best odds of getting into these terrific gamefish.

I have always recommended that anglers practice catch and release with this magnificent species. Release them as soon as possible after landing them to maximize their chances of survival. Encourage your fellow anglers to do the same.

False albacore inject southern spice into the surf every fall. Their tremendous speed, remarkable strength and intense fighting spirit have earned them elite status within the surf fishing ranks. They may be relatively small fish but the fight they put up when hooked resembles that of much larger fish. When you hook into your first surf albacore, you hook yourself on these little big fish for life!